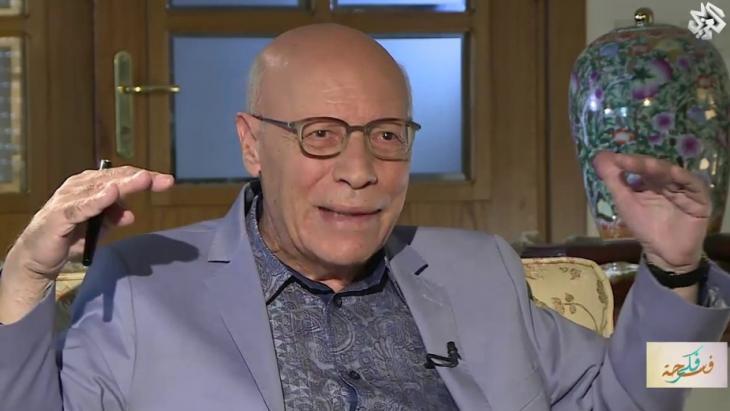 Interview with pioneering Islamic thinker Fehmi Jadaane
What is the essence of Islam, and does it need reforming?

Renowned Jordanian Islamic scholar Fehmi Jadaane vehemently objects to the transformation of Islam into an ideology. The religion ends up mired in a political swamp, he says, its message nothing more than an instrument of governance. Interview by Alia Al-Rabeo

In recent years some authors and intellectuals have shown increased interest in the so-called "reformation" of Islam. Do you address this issue in your book "The Liberation of Islam"? Does the modern Arab world need this kind of reformation? And would it help in countering religious fundamentalism?

Fehmi Jadaane: Let me make it quite clear that I am not interested in a reformation of the faith in its essence, nor with questioning what the revelatory scripture contains, implies or aims at. Because that would imply that there is a defect in the structure of the text that needs to be repaired. Which is not at all my conviction. What I'm really getting at is this: the text of revelation, inscribed for all time on God's "well-guarded tablet", is confronted today with numerous contradictions in the reality that manifests itself to believers – that is to say to individual human beings. These contradictions stem from the fact that man is imperfect through and through, in all facets of his existence. For there is nothing more contradictory than a human being.

This has implications for how the text is understood, how it manifests itself and materialises in experienced and imagined reality. The obstacles and contradictions to which Islam has been and still is exposed are countless. If we want liberation, we must face up to this fact.

There is no doubt that the upheavals triggered by religious fundamentalism are currently the most prominent phenomenon in this scenario. But there are also other deep-seated contradictions that are wreaking massive damage on the global image of Islam. I dealt with some of them in my book "The Liberation of Islam". We must resolutely censure, reject and remedy these contradictions – just as we must the notion of an Islam reduced to its ideological-political aspects.

You call for a dialogue between all groups across the social spectrum so that the Arab region can enter into modernity. Do you really believe it is possible for such dialogue to take place, given the massive polarisation and divisive tendencies that run through Arab society – sectarian, political and ideological?

Fehmi Jadaane: I would like to take this opportunity to throw in a quote: 'where justice is manifest, divine law comes into its own'. The just state is thus quite capable of providing for the needs of the general public. Of course, fanatics won't let themselves be dissuaded from their dogmatism and entrenched views just like that. Because they are ruled and controlled by "passions", not by reason and pragmatism.

I therefore share your fears regarding the question of whether current generations in the Arab countries – at least the older ones among them, who have experienced politics as senseless conflict their entire lives – are ready for such new approaches to thinking and action.

I am pretty sure that this will only be possible for future generations – provided that an early start is made to inculcate in them paedagogical values based on what Jurgen Habermas called "communicative action". In other words, the values of free debate, dialogue, exchange, openness and mutual respect. 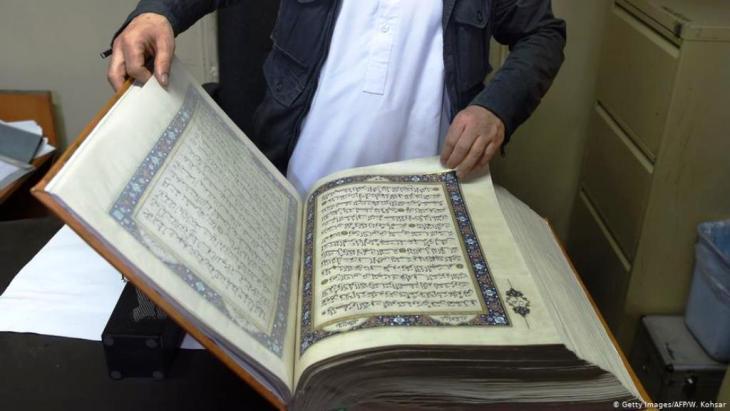 Put an end to the fatwa cacophony: "I would like to see an end to this demeaning chaos with respect to the issuing of legal opinions, the so-called fatwas. I would like to see a religious institution that is credible, that can be trusted and respected. One that would be in a position to reconcile the different religious dogmas and interpretations and to protect the faith from the arbitrariness of the propagandists, preachers, jurists and theorists in the various political religious movements who impose all sorts of doctrines on the people and inundate religion with their heinous fatwas," says philosopher Fehmi Jadaane

In your book you blame the Arabs for Islam's current state of decline. How exactly are the Arabs responsible for that decline? Isn't that an exaggeration? Particularly considering that Islam is also in decline in non-Arab regions such as Pakistan, Afghanistan and Africa?

Fehmi Jadaane: I am an Arab body and soul, but I am not satisfied, let alone happy, with the "historical achievements" of the Arabs, neither in the past nor in recent times. Yet I also disagree with those who are obsessed with the fixed idea of an unchanging "Arab mentality" that purportedly makes them responsible for everything bad in the world.

Everything that is found among Arabs can in fact also be found among other peoples – and often to an even greater extent. It cannot be denied that Arab actions have often been ruled by their "passions". Examples include the seizure of power by the Umayyads in 661 AD, which put an end to the era of the "upright caliphs", and then their overthrow in turn by the Abbasids in 750 AD. It is a pattern that continues into the present day.

It is likewise undeniable that the rationalist currents within Arab culture – which have produced such notables as the physician Rhazes (Abu Bakr al-Razi), the polymath and translator Al-Kindi, the historians Ibn Miskawayh and Ibn Fadl Allah al-Umari, the logician Al-Sijistani, and the physician and Aristotle commentator Averroes (Ibn Rushd) – were appropriated and suppressed.

The era of functional, action-oriented reason was short-lived in the Arab world. The modern West has instead become the representative of this type of rationality. It has brought it to its zenith and with its help changed the world, while the Arabs have yet to come close to achieving such heights again.

From a structuralist point of view, however, there is no need to despair. I don't think much of the racist postulates of Orientalism, nor of the representatives of "critical theory", such as the Moroccan philosopher Mohammed Abed al-Jabri and other contemporaries who shamelessly emulate Western thinking, importing all their knowledge from outside, and then without hesitation label the "Arab mind" as inadequate and incapable.

Despite everything, I will not give up my hope and my optimism. And I will continue to argue in favour of holistic and analytical, critical reason, in which intellect and emotionality are combined, and which is oriented towards the principles of justice, the common good, freedom, human dignity, progress and "communicative action" according to Habermas. All that is needed is a just and well-governed state together with free and unselfish citizens.

For a plurality of Koranic interpretations

To return to the previous question: You say that Arab Islam will turn into "Arab cultural imperialism" if it continues to exclude non-Arab Muslims in the process of the so-called liberation of Islam. At the same time, you feel that non-Arab Muslim societies are not able to take a leadership role in Islam, given the many obstacles you describe in your book. Aren't these two ideas contradictory in a way?

Fehmi Jadaane: The statements in my book on this matter have been misconstrued in several respects. What I meant to say was: if the Koran and Islam are approached exclusively via the gateway of the Arabic language, it can lead to non-Arab Muslims seeing this as "Arab cultural imperialism" – that is in fact how some of their representatives have put it. In my view, a "conceptual and terminological" approach would be more appropriate.

It thus follows that the insistence on the "linguistic inimitability" of the Koran and on the "holiness of the Arabic language", as well as reducing everything that has to do with the Koran and Islam to the "purity" of the Arabic language and its special features, i.e. assigning Arabic a "reference role", triggers feelings of inferiority among non-Arab Muslims or even negative projections towards Arabs.

We should be aware here that the theory of "linguistic inimitability" is extremely controversial, and that there are other theories that take a different view of this issue. But to conclude from this that the salvation of Islam and Muslims lies in the hands of non-Arab Muslims is not necessarily my approach. Rather, I believe that their situation does not differ significantly from that of the Arabs, and that in some countries it is even worse.

How can we expect Jordanian women to participate fully in political life if they know that they don’t enjoy the same legal status as their male counterparts, or the constitutional ... END_OF_DOCUMENT_TOKEN_TO_BE_REPLACED

Despite Syria's lengthy civil war, dictator Bashar al-Assad is now being courted by many governments in the Middle East as if nothing ever happened. The reasons for this vary. By ... END_OF_DOCUMENT_TOKEN_TO_BE_REPLACED

Horses and mules have long drawn tourist carriages through Jordan's ancient city of Petra, but animal rights concerns are driving a project to start replacing them with electric ... END_OF_DOCUMENT_TOKEN_TO_BE_REPLACED

Jordanian writer Jalal Barjas' novel "Notebooks of the Bookseller", which won this year's Booker International Prize for Arabic Fiction, was celebrated at a symposium during the ... END_OF_DOCUMENT_TOKEN_TO_BE_REPLACED

Winner of the Student Oscar: a little girl in a bombed-out flat in Syria. The television is her only window to the world – but even this is taken away from her. Nikolas Fischer ... END_OF_DOCUMENT_TOKEN_TO_BE_REPLACED

While Bashar al-Assad is still shunned by the West, which blames him for a decade of brutal war in Syria, a shift is under way in the Middle East, where Arab allies of the United ... END_OF_DOCUMENT_TOKEN_TO_BE_REPLACED
Author:
Alia Al-Rabeo
Date:
Mail:
Send via mail

END_OF_DOCUMENT_TOKEN_TO_BE_REPLACED
Social media
and networks
Subscribe to our
newsletter