Other countries in the region are plagued by very elementary concerns.

Zumbraegel: In the Levant, the fertile Crescent and also in Egypt, water shortage is the main problem. The region is actually rich in water reserves, as a result there is a strong agricultural tradition. But due to factors such as global warming, rising sea levels, salinisation and soil pollution, the area is now also facing water security concerns.

Disputes over water have been a source of conflict in the past.

Zumbraegel: Indeed, the region boasts a number of ongoing conflicts over water resources. Tensions over the construction of the GERD dam in Ethiopia, the Grand Ethiopian Renaissance Dam, are currently coming to a head and the conflict is boiling up in the media.

Back in the 1970s, Boutros Boutros Ghali, who would subsequentyl become UN Secretary-General, said that the next war in the Middle East would be ignited by water. Now the rhetorical sabre-rattling from Cairo and Addis Ababa is growing louder and the dispute could trigger a regional crisis. I believe that environmental destruction and climate change is only likely to intensify such situations in future. 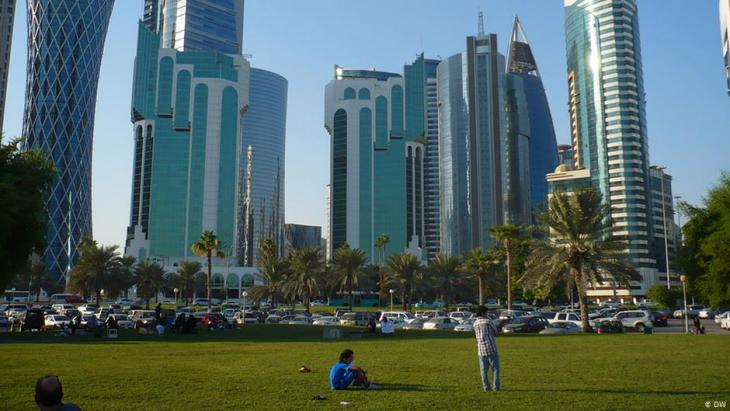 The skyline of Doha: Qatar sought to boost its international image by hosting the UN Climate Change Conference in Doha back in 2012. Which was also very necessary, because at that time the rich emirate had the highest ecological footprint per capita worldwide. Even today, it is still a symbol of immense consumption and the blatant waste of resources and natural capital

Let's switch from geopolitics to the social level: have there been any mass demonstrations relating to environmental issues?

Zumbraegel: In recent years, environmental considerations have played a subsidiary role in many protest movements. The primary focus has been on social injustice, the fight against autocratic leadership and corruption. But of course, there is also popular concern about environmental pollution and the exploitation and distribution of natural resources.

Zumbraegel: In Morocco, for example, people have demonstrated for better access to water, in Lebanon against corrupt waste management, and in Tunisia against the effects of environmental pollution from industrial plants. There have also been protests that were directly triggered by the impact of climate change, but which public debate chose to interpret differently. Take the recent and repeated flooding in Jeddah on Saudi Arabia's west coast. Following particularly severe floods in 2009, Saudi Arabia saw significant protests on social media.

The public outcry was great owing to the number of casualties that resulted from ignorance of the dangers. Yet the flood was presented less in terms of climate change, however, and more as a reflection of administrative mismanagement and corruption. While the governor of Jeddah resigned, criticism of the Saudi royal house and its non-existent environmental policy remained very muted.

In Doha, Arabs from Morocco, Tunisia, Egypt and Algeria are gathering to celebrate the first ever FIFA World Cup to be held on Arab soil. The criticism from Europe? Over the top, ... END_OF_DOCUMENT_TOKEN_TO_BE_REPLACED

"Rebel Game: The Power of Football in the Middle East and the Qatar World Cup", an anthology published by Middle East researchers Jan Busse and Rene Wildangel, takes the upcoming ... END_OF_DOCUMENT_TOKEN_TO_BE_REPLACED

After a two-year hiatus, the Arab League re-convened at the beginning of November in Algiers against a backdrop of uncertainty and discord. By Pierre Boussel END_OF_DOCUMENT_TOKEN_TO_BE_REPLACED

The history of Jews and Muslims is far more entangled than you might imagine – but you have to listen out for it. In "Recording History", Christopher Silver takes us on a sonic ... END_OF_DOCUMENT_TOKEN_TO_BE_REPLACED

Welcome to the world of Al Qasar, where Arabic music collides head-on with punk and psychedelic to create something powerful and beautiful. "Who Are We" is a raucous, subversive ... END_OF_DOCUMENT_TOKEN_TO_BE_REPLACED

END_OF_DOCUMENT_TOKEN_TO_BE_REPLACED
Social media
and networks
Subscribe to our
newsletter