Why is there such little respect across the region for environmental organisations founded by citizens?

Zumbraegel: There are two aspects to this. Firstly, the state always regards such non-governmental organisations (NGOs) as a challenge, as competitors threatening the stability and legitimacy of the government. After all, people might ultimately get the impression that the state was not fulfilling its core tasks. Autocrats are extremely fearful of this triggering popular unrest. On the other hand, the general public doesn't tend to give such organisations an easy time either. People simply do not see any great need for non-governmental involvement. Both these factors mean that the legal and institutional hurdles for an NGO are very, very high.

Could you give me an example?

Zumbraegel: Many environmental NGOs have emerged in Iran over the past decade. From 2013 onwards, the Rouhani administration even supported them, because it was recognised that they could tackle local environmental problems far more effectively. But in recent years, repression has once again increased. At the beginning of this year, for example, several members of the Persian Wildlife Heritage Foundation were arrested for alleged espionage.

In your study you mention the idea that resource wealth exacerbates authoritarian practices. What do you mean by this?

Zumbraegel: It is often claimed that the proceeds from fossil fuel sales can be used to bestow generous welfare gifts on the population, such as free medical care. It is a common autocratic practice to say: as long as you do not have to pay taxes, you cannot claim representation. But welfare gifts can also be applied specifically to calm protests, as in the Gulf monarchies in 2011. The role of rentier state theory should not be overstated, however. After all, even the rich Gulf monarchies have begun introducing taxes – sales tax, for instance. 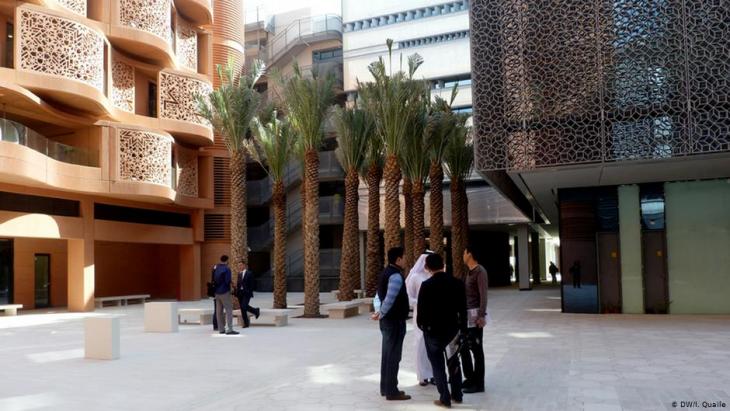 Masdar City in Abu Dhabi was meant to be the first city in the world to be completely emission-free. This ambitious plan has since been abandoned. Nowadays, people are merely talking about compensating for the greenhouse gases produced or even simply operating with low carbon emissions. Despite this, the political scientist Tobias Zumbraegel believes that what is being done here can have an impact on global emissions

Does the threat of coronavirus make the move towards more sustainability a luxury? Or does the crisis offer a historic opportunity?

Zumbraegel: All around the world, people are trying to revive their reeling economies. As a result I fear they will slip back all the more comfortably into their old habits. Some countries in the region are experiencing a double whammy: they hadn't recovered from the last oil crisis in 2014 and now the next oil price slump is coming.

So it's unrealistic to hope that the crisis will force people to invest in green technologies?

Zumbraegel: There are certainly initiatives to move away from fossil energy production and become more energy efficient, but only at a national level. After all, the resource-rich countries in the region still want to extract, produce and, above all, sell oil, not least to maintain their economic and – by extension, therefore – their political stability. Despite green initiatives that sound promising on paper, people repeatedly ignore the fact that all these countries are still working very hard on their oil and gas infrastructure, even expanding it. The Saudis are determined that the last drop of oil should be extracted in their oilfields and not elsewhere.

So in the end it's all just greenwashing?

Zumbraegel: In some respects this accusation is quite true. Many governments are concerned with securing their nation's economic prosperity and the welfare state, not to mention cultivating a positive image, both at home and abroad. The top priority, however, is serving their clientelistic networks. Still, it is probably more accurate to speak of "greening" than "greenwashing". Abu Dhabi, for instance, promised to establish Masdar City, the first city to be completely emission-free. This ambitious plan has since been abandoned. Nowadays, people are merely talking about compensating for the greenhouse gases produced or even simply operating with low carbon emissions. Despite this, I do believe that something is being done here to reduce emissions globally. It is certainly much better than these countries disengaging from the issue altogether.

Tobias Zumbraegel is an Islamic and political scientist and staff member of the Centre for Applied Research in Partnership with the Orient (CARPO). He recently published the study "The Looming Climate Peril, Sustainable Strategies and Environmental Activism in the Middle East and North Africa".

In Doha, Arabs from Morocco, Tunisia, Egypt and Algeria are gathering to celebrate the first ever FIFA World Cup to be held on Arab soil. The criticism from Europe? Over the top, ... END_OF_DOCUMENT_TOKEN_TO_BE_REPLACED

"Rebel Game: The Power of Football in the Middle East and the Qatar World Cup", an anthology published by Middle East researchers Jan Busse and Rene Wildangel, takes the upcoming ... END_OF_DOCUMENT_TOKEN_TO_BE_REPLACED

After a two-year hiatus, the Arab League re-convened at the beginning of November in Algiers against a backdrop of uncertainty and discord. By Pierre Boussel END_OF_DOCUMENT_TOKEN_TO_BE_REPLACED

The history of Jews and Muslims is far more entangled than you might imagine – but you have to listen out for it. In "Recording History", Christopher Silver takes us on a sonic ... END_OF_DOCUMENT_TOKEN_TO_BE_REPLACED

Welcome to the world of Al Qasar, where Arabic music collides head-on with punk and psychedelic to create something powerful and beautiful. "Who Are We" is a raucous, subversive ... END_OF_DOCUMENT_TOKEN_TO_BE_REPLACED

END_OF_DOCUMENT_TOKEN_TO_BE_REPLACED
Social media
and networks
Subscribe to our
newsletter