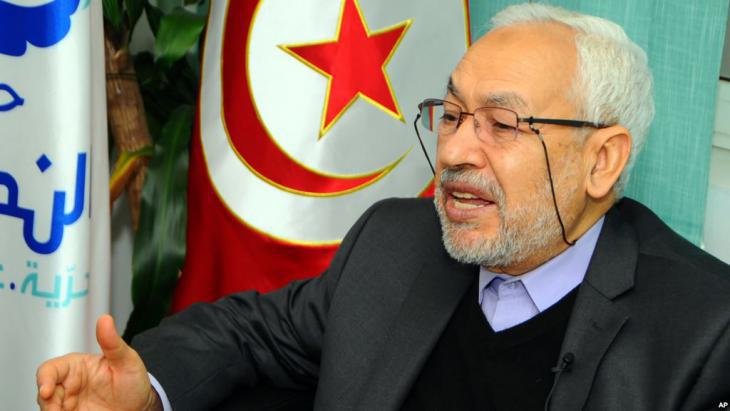 Interview with Rachid Ghannouchi
"If you sow dictatorship, you harvest terrorism"

Rachid Ghannouchi is the leader of Tunisia's Ennahda Party. He was recently awarded this year's Ibn Rushd Prize. Daniel Bax and Tsafrir Cohen spoke to him about his country's liberal constitution, the freedom to cast off religion, and Tunisia's pioneering role in the Arab world that highlights the compatibility of Islam and democracy

Mr Ghannouchi, the new Tunisian constitution passed last January is regarded as the most secular constitution in the Arab world to date. Was it difficult for you to agree to it?

Ghannouchi: No, we're very proud of this constitution. We not only supported it; we also helped develop it. I don't regard it as a secular constitution, but as one that unites Islam, democracy and modernity.

The Tunisian constitution grants far-reaching freedom of religion and conscience, which can also including turning away from religion. That's very unusual for the Arab world...

Ghannouchi: …That is something that is written in the Koran: there is no compulsion in religion.

Nevertheless, apostasy is a crime in some Arab countries...

Ghannouchi: Unfortunately, that's an interpretation some people follow. But I don't share it. In Islam, we don't have a Church that could claim to speak in the name of God or of Islam. There has always been a freedom in and a wide variety of interpretations of Islam. In my work and my books, which I wrote in the early 1990s, I set out that Islam guarantees freedom of religion and conscience, and that this applies in both directions: for adopting and rejecting the faith. 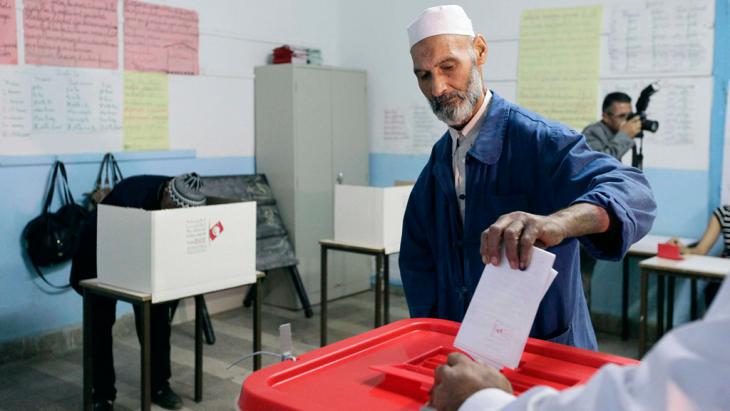 Man casting his vote in the parliamentary election in Tunisia, 26 October 2014. "No, we're very proud of this constitution. We not only supported it; we also helped develop it. I don't regard it as a secular constitution, but as one that unites Islam, democracy and modernity," says Rachid Ghannouchi

Have you not received a great deal of criticism for this stance, for instance from the Salafists?

Ghannouchi: There have always been different schools of thought throughout the history of Islam. But for 14 centuries of Islamic history, Islamic societies have always been pluralist and accepted people who followed other religions or none at all, and guaranteed this freedom and diversity. This acceptance of diversity is not something we had to import from the West either. When we look at Western countries, acceptance of diversity only evolved there after the Renaissance. Before that, there were religious wars that lasted for decades.

The French Revolution is regarded as the birth of enlightenment, democracy and human rights. What's your position on these values?

Ghannouchi: The Tunisian constitution is founded on two pillars: the principles of Islam and the principles of modern society and human rights, which are a product of the Enlightenment. The Universal Declaration of Human Rights was drawn up by people of many different cultural origins.

Ghannouchi: It represents an attempt to combine the principles of Islam with the Universal Declaration of Human Rights. But for me, there's no contradiction between human rights and Islamic values. We accept that in our constitution, and that's also part of the foundations of my thinking.

What do you say to groups that attempt to implement their radical interpretations of Islam by means of violence?

Ghannouchi: This phenomenon is based on an extreme reading of Islam, but it's also the product of a certain political and socio-economic situation that produces such abnormal interpretations. But this is not a specifically Islamic phenomenon. After all, there have been extremist, terrorist organisations at different times and in all sorts of countries. One only has to remember the Baader-Meinhof group in Germany or the Red Brigades in Italy. Two things are needed to undermine these kind of groups: democracy and human development. 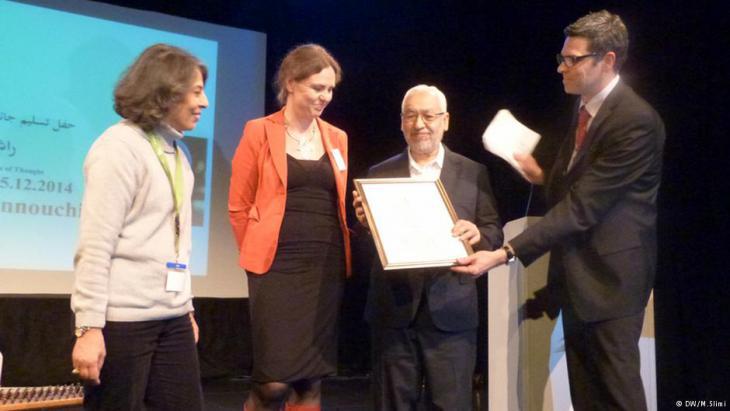 Rachid Ghannouchi receiving the Ibn Rushd Prize 2014. The Ibn Rushd Fund for Freedom of Thought was founded in 1998 on the 800th anniversary of Ibn Rushd's (Averroes') death and the 50th anniversary of the Universal Declaration of Human Rights. The fund's goal is to foster freedom of thought, democracy and the courage to stand up for one's beliefs in the Arab world. According to the fund's website "The Ibn Rushd Fund wants Arab culture to strive for rationalism and tolerance. Supporting the ideas of freedom of thought and democracy is an important starting point to catch up with the process of world civilization. To this end, the fund collects money to honour people who have rendered outstanding services to these goals"

Tunisia is a democracy now. However, it also exports an above-average number of jihadists who are now fighting in Syria. How do you explain this development?

Ghannouchi: The people who are now in Syria are not children of the Tunisian revolution, which took place only four years ago; they grew up under Ben Ali. We have to understand the causes of the conflict: this violent extremism is a reaction to and a result of the dictatorships under which these young people grew up – Ben Ali, Gaddafi, Mubarak, Assad, Saddam Hussein... If you sow dictatorship, you harvest terrorism.

How can Tunisia protect itself from this extremism and stop itself from sliding into chaos and civil war?

Ghannouchi: Yes, we are living in a crisis-stricken region. But I believe we have a strong common understanding of the state in Tunisia; it's a relatively homogenous society and the education level is fairly high, compared to the rest of the region. Moreover, the form of Islam that people believe in is rather moderate. That's why I believe and hope that a successful democratic development in the country will stop terrorism and extremism from evolving in Tunisia.

Critics accuse Ennahda of not having taken tough enough action against extremist Salafist groups during its time in government. There were two political murders of left-wing opposition activists, which shocked the country. What do you say to these accusations?

Ghannouchi: Our political opponents and competitors have made such allegations. Foreign media picked up the accusations and that turned them into facts. Terrorism existed before Ennahda was in government and it existed afterwards. It's an international phenomenon of which Tunisia has its share – and I hope that this share will remain very minor.

Recent efforts to rehabilitate Assad are setting a damaging precedent for accountability, just as the international community is expressing the need to hold Russia to account for ... END_OF_DOCUMENT_TOKEN_TO_BE_REPLACED

Nouara may be 65, but she is ready to join thousands of others who burn their ID and pay traffickers for the chance of a new life in Europe. Zineb Bettayeb reports END_OF_DOCUMENT_TOKEN_TO_BE_REPLACED

Education for girls and women is still possible in Afghanistan, says Reinhard Eroes of the Kinderhilfe Afghanistan initiative. In interview with Elisa Rheinheimer, he talks about ... END_OF_DOCUMENT_TOKEN_TO_BE_REPLACED

Locals in the Middle East have said European critics are showing bias and hypocrisy when they condemn Qatar. Observers agree that Qatar has had to deal with more criticism than ... END_OF_DOCUMENT_TOKEN_TO_BE_REPLACED

In Doha, Arabs from Morocco, Tunisia, Egypt and Algeria are gathering to celebrate the first ever FIFA World Cup to be held on Arab soil. The criticism from Europe? Over the top, ... END_OF_DOCUMENT_TOKEN_TO_BE_REPLACED
Author:
Daniel Bax & Tsafrir Cohen
Date:
Mail:
Send via mail

END_OF_DOCUMENT_TOKEN_TO_BE_REPLACED
Social media
and networks
Subscribe to our
newsletter