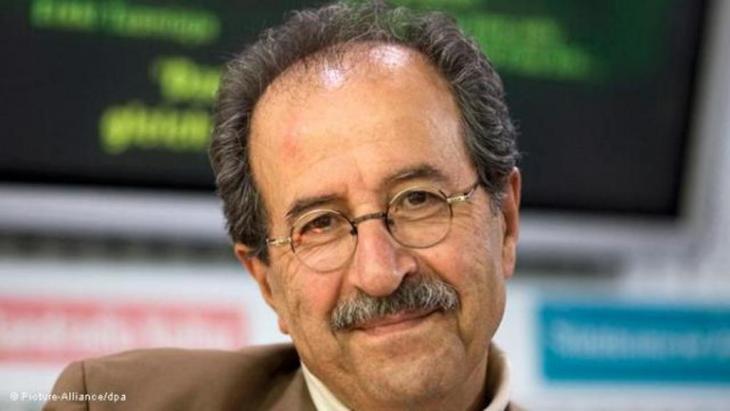 According to renowned Syrian-born writer Rafik Schami, Assad's survival concept is quite straightforward: to keep his clan in power at any price. He is being aided in this endeavour by the West's indecisiveness towards his regime. Interview conducted by Eren Güvercin

Mr Schami, has the West failed in Syria?

Rafik Schami: No, not the West, but its values of freedom, democracy and human rights. When we talk about the "West", we mean the governments that continue to do great business with all sides. So the hypocrisy goes on.

People in the West have, wherever I met them in Europe, taken a stand, but in the end, this stand either for or against the regime remains inconsequential. Governments are issuing contradictory public statements. They appear irresolute, confused and indecisive, while clearly and consistently working together with the regime behind the scenes. Russia is a popular scapegoat, but can any honourable American, German or British politician really swear that to this day, his intelligence agency has not been working hand in glove with Assad?

Why are we currently getting such detailed reports on the political situation in Ukraine and Turkey, whereas Syria has been pushed to the sidelines? What status do democracy and human rights still have for the western community of states?

Schami: I can't ascertain any difference at all between the positions of western governments. Ukraine will probably soon meet the same fate as Syria, or Vietnam and Chile in times gone by. As soon as the superpowers agree on a position behind the scenes, initial interest will wane. Unfortunately, across the whole of Europe, there isn't one single politician agitating for a distinctive policy on Syria or doing anything to counter the "infernal trio" that is China, Russia and the US.

Only now, when we consider the student revolts of the 1960s, can we appreciate them in their full historic dimension. In spite of all the shortcomings and the later opportunism of its charismatic leaders, in the end, the student movement prevented the isolation and destruction of the Vietnamese, which had been the aim of US Presidents Johnson and Nixon. 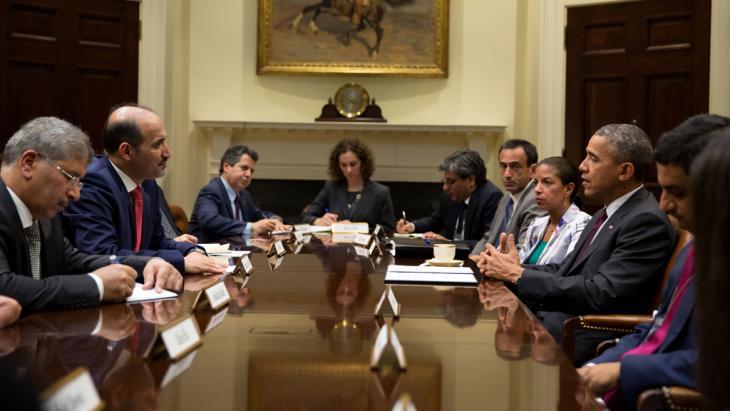 No united front against the Assad regime either at home or abroad: according to Rafik Schami, "the opposition is itself divided by internal disputes. The only thing they have in common is the desire to hound the Assad clan out of the country. When it comes to the question of how Syrian society might be organised in the future, however, the opposition is divided into many different political movements"

Many observers initially thought Assad would not be able to hold on to power for very long. But his position appears to be more secure than ever. How do you explain that?

Schami: I was not one of those overhasty observers, because I knew just how solidly Assad's system of rule has been built up. Father and son worked on it for 40 years. And both men knew how to deal with East and West, Socialists and Islamists, Hamas and Israel, Hezbollah and the conservative Christians in Lebanon, Saudi Arabia and Iran, the CIA and the KGB – and all at the same time. The formula is nevertheless quite straightforward, namely to retain the power of the clan at any price. This remains Bashar al-Assad's strategy to this day. He bundles local and international forces to reach his goal and is willing to dispense with everything else. This is also why his front is so solid – from China via the West to Russia.

The oppositional front against Assad, on the other hand, appears to be anything but solid…

Schami: That's correct. Liberating Syria from a dictatorship is obviously not such an attractive prospect for all these players. In this geopolitically significant region, an independent and free populace could reshuffle the deck in such a way as to make things uncomfortable for many powers. Also, the opposition is itself divided by internal disputes. The only thing they have in common is the desire to hound the Assad clan out of the country. When it comes to the question of how Syrian society might be organised in the future, however, the opposition is divided into many different political movements.

I would personally like to see a liberal-democratic republic with a clear division of state and religion, where the military withdraws to its barracks and never again interferes in political matters, where all intelligence services are dissolved, where men and women enjoy equal rights, where all religious communities and ethnicities are respected and protected, where blood feuds are punished with the maximum penalty – and not with light sentences as is the case today – where freedom of expression is a cherished asset and where no one must suffer for his opinions. During the first six months of the rebellion, these were the demands written on the protesters' banners. But the world left them to their own devices; it stood back and allowed them to be mowed down. Now, these demands are not backed by a majority among the rival armed groups.

Back in the late 1970s, there were reports that Hafez al-Assad had ordered the massacre of dissidents. Again, the West paid little interest at the time. What strategy did he adopt to effectively eliminate the opposition?

Schami: Assad's father wasn't really a strategist as such, more of a tactician, a schemer of the sort that can only be produced by a suppressed minority. He confined his goal-oriented activities to a select group of people and skilfully integrated them into campaigns and conflicts between the various factions. Although his strategic goal – the transformation of the republic into an "Assad Kingdom" – remained his secret, all of his actions worked towards this goal, and anyone within his inner circle of power who got wise to his plans and rejected them, was quietly or brutally eliminated. Saddam Hussein utilised the same model to consolidate his power in Iraq, although he – unlike Hafez al-Assad – was actually a highly primitive killer. 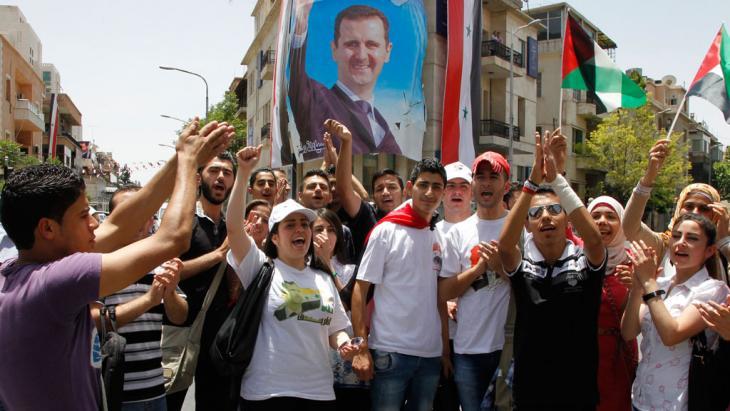 An electoral farce dismissed by the international community: according to official statistics, Assad received 88.7 per cent of the vote despite the fact that turnout was down

Did that happen without help from abroad, from the West?

Schami: No, of course not. In Hama, between 20,000 and 30,000 innocent people fell victim to his ethnic cleansing, while the West looked on, just as the West cold-bloodedly abandoned the wonderful democracy in Chile because Kissinger decided to eliminate Salvador Allende.

Of course, in view of the tens of thousands of Syrians who have been killed and the millions of refugees, the presidential elections recently staged by Bashar al-Assad were a farce. Realistically, can a country so ravaged by civil war be governed in the long-term?

Schami: The battles look set to endure until Syria is completely destroyed. And Assad will eventually fall. But it's not only the reconstruction of the country's infrastructure that will take a long time, but also the ruins in our souls; it will take a long time for us to be able to reach out to one another again.

What, in your view, are the most pressing issues to be addressed?

Schami: Immediate and generous aid for Syrian refugees, with the priority being given to generous aid for the children in the refugee camps. Reception countries are being let down at present. More than 80 per cent of UN aid money is finding its way into the pockets of the Assad clan – something that the UN itself admits, and that we Syrians have always known. It's not a question of bringing children here en masse, they should be protected inside Syria itself. The aid flow must be monitored to ensure it arrives in the right place. Then schools and healthcare provisions must be established to allow the development of normal everyday life. That is extremely urgent, because otherwise all these children are learning is survival at any cost.

Home
Print
Newsletter
More on this topic
Syria and the Ba'ath regime: Assad and the post-eternity eraSyrian opposition groups: Time to join forcesInterview with the Syrian writer Samar Yazbek: ''The Syrian revolution has not lost its innocence''
Related Topics
Assad regime, Christians in the Islamic world, Druze, Islam and the West, Policy on refugees and migration, Rafik Schami, Refugees, Syrian Civil War, Syrian opposition
All Topics

Any reconciliation between Turkey and Syria’s Assad regime would have disastrous consequences for many Syrians, explains Syria expert Kristin Helberg END_OF_DOCUMENT_TOKEN_TO_BE_REPLACED

There are signs of an imminent normalisation of relations between Turkey and Syria. This would allow Erdogan to score political points domestically before the upcoming elections ... END_OF_DOCUMENT_TOKEN_TO_BE_REPLACED

As Syrian camps housing families of Islamic State fighters get more dangerous, there are calls to bring children out, even if the mothers don't want to go. The idea of separating ... END_OF_DOCUMENT_TOKEN_TO_BE_REPLACED

Where are the measures to deal with the looming challenges facing the Arab world? In this commentary, Marwan Muasher warns that the region is in grave danger of falling behind ... END_OF_DOCUMENT_TOKEN_TO_BE_REPLACED

At the end of every year, the team at Qantara.de gives you a run-down of the ten most-read articles on the site over the past 12 months. Here is a quick overview of the stories ... END_OF_DOCUMENT_TOKEN_TO_BE_REPLACED

Social engagement is often motivated by religious factors. A new book explores the background to these community efforts and appraises how effective they are in helping to ... END_OF_DOCUMENT_TOKEN_TO_BE_REPLACED
Author:
Eren Güvercin
Date:
Mail:
Send via mail

END_OF_DOCUMENT_TOKEN_TO_BE_REPLACED
Social media
and networks
Subscribe to our
newsletter