"We are suffering under China's Authoritarian Regime"

The president of the Uighur World Congress, Rebiya Kadeer, has turned into the symbolic leader of the struggle of the Uighur people against the Chinese government, as they try to win some autonomy in Xinjiang. Eren Guvercin spoke to her about the conflict between the Uighurs and the government 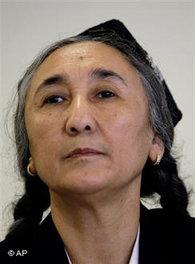 Rebiya Kadeer: "The Uighurs live in constant fear. It is like one big prison for them"

​​How is the situation in Xinjiang at the moment, Ms Kadeer?

Rebiya Kadeer: The situation for the Uighurs in East Turkestan has been acute ever since the Chinese government flooded the region with tens of thousands of security forces. The Uighurs live in constant fear. It is like one big prison for them.

The regime in Peking accuses the Uighurs of terrorism, and there have been bomb attacks in Xinjiang in the past. What would be your response to this accusation?

Kadeer: Since Uighurs are Muslims, after 11 September 2001, the Chinese government began to portray the discontent of the Uighur people with its brutal rule in East Turkestan as terrorism. There have been some isolated acts of violence in East Turkestan but such violence has been common in the rest of China too. So far, the Chinese government has not been able to provide any convincing, substantial evidence for the alleged Uighur terrorism.

Is this new rhetoric influenced by the 11 September 2001 attacks and the "war against terror"?

Kadeer: Exactly. Before September 2001, China had charged and persecuted Uighurs as "counter-revolutionaries", "nationalists," and "separatists". But as we are Muslims, in the wake of the 11 September attacks China decided to exploit those tragic events to the full by using the global war on terror as a cover and justification for its wholesale attack on the Uighurs. 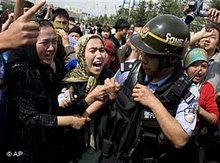 ​​ The general public are very aware of the oppression in Tibet, but not of the Uighur’s situation. What are the reasons for this?

Kadeer: One of the key reasons is that His Holiness the Dalai Lama was able to flee Chinese persecution fifty years ago and raise awareness of the situation in Tibet in the West, whereas the Uighur leaders were killed by the Soviets and Chinese, so we were not able to tell the world about our suffering until recently. Furthermore, compared to Islam, Buddhism is looked on favourably by the West, especially in the aftermath of the 11 September 2001 attacks.

What kind of oppression do Uighur Muslims experience in China?

Kadeer: The Uighur Muslims' suffering is multi-dimensional – political, social, cultural and religious; discrimination is rampant in education, employment and healthcare. Being a Uighur Muslim in China today is almost synonymous to being a criminal suspect, and even worse, a terrorist suspect.

Are you in contact with the Dalai Lama? Can China's oppressed peoples achieve more together than alone?

Kadeer: Yes, I am in touch with His Holiness from time to time. I believe that we can achieve more by working together.

What are your expectations of the international community?

Kadeer: The international community should put pressure on China to end the sixty-year repression of the Uighurs, Tibetans and all religious and ethnic groups oppressed under the authoritarian rule of the Chinese government. The international community should call on the Chinese government to initiate a dialogue to resolve the East Turkestan and Tibetan issues peacefully. 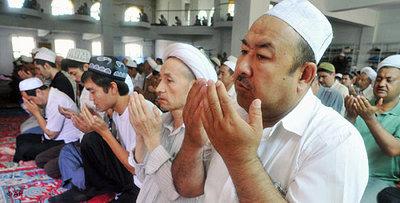 Protest prayers: men praying in a mosque in Urumqi, the capital of Xinjaing, which opened during the unrest in defiance of an official closure

Has the Muslim world supported the Uighur Muslims?

Kadeer: Yes, but only to an extent. We hope the Muslim countries and peoples will support us while we are suffering under China's authoritarian, atheist regime precisely because we are Muslims. Because of our Islamic faith, since September 2001 the Chinese government has justified its persecution of Uighur Muslims by labelling us terrorists and extremists. China is actually one of the biggest persecutors of Muslims in the world. It is therefore imperative that Muslims and Muslim governments help their long-suffering Uighur Muslim brothers and sisters under China's brutal communist rule.

You were a very successful businesswoman in China and even a delegate in the congress. How did you become an enemy of the communist regime?

Kadeer's book "Dragon Fighter: One Woman's Epic Struggle for Peace with China" has been published in Germany. The German publishers have called it: "Storming heaven: China's public enemy number 1 tells her life story"

​​ Kadeer: The Chinese communist regime tried to use me as its puppet to legitimate its brutal oppression of the Uighur Muslims. When I didn't play the role expected, I was put in prison for nearly six years and the government has now declared me its worst enemy and even a terrorist.

Some of your family members still live in China. What is the situation like for them? Do you have contact to them?

Kadeer: I have lost all contact with my family in China since the 5 July massacre. I pray to Allah that they are all fine but I cannot be certain as my family has long been singled out for persecution by the Chinese government.

How do you stay informed about events in Xinjiang? Are there still ways to get reliable information?

Kadeer: I get information from Uighurs who live in East Turkestan and travel overseas. I frequently get phone calls and e-mails from Uighurs, providing me with detailed and credible information on China's brutal treatment of Uighur Muslims.

The Chinese Regime and the Uighurs
Colonialists in Their Own Country
The Communist Party has always reacted with violence whenever it has been faced with the efforts of its Muslim Uighur minority to gain its autonomy. One reason is the strategically important location of the province in which they live, but there are others. Kai Strittmatter looks at the issues involved

China's Muslim Minority
China's Battle Against the Uighurs
The way China is treating the Tibetan uprising has outraged the West. The suffering of the Uighurs, on the other hand, receives little attention. Beijing defends the suppression of the Muslim minority as fighting terrorism. Andreas Leixnering reports

China and the Uighurs
Terrorism Panic – a Welcome Excuse?
Just before the opening of the Olympic Games in Beijing, two terrorist attacks shook China, killing a total of more than 20 people, mainly police officers. The Chinese authorities accused Muslim extremists of carrying out the bombings. Since then, the world has started taking notice of an ethnic group previously only familiar to specialists: the Uighurs. Albrecht Metzger has the details

END_OF_DOCUMENT_TOKEN_TO_BE_REPLACED
Social media
and networks
Subscribe to our
newsletter