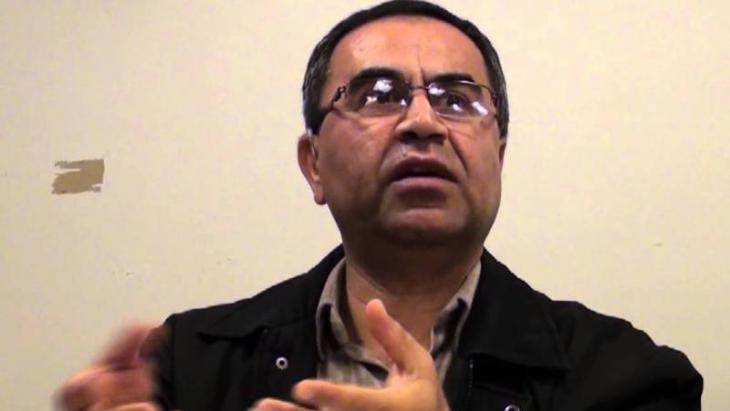 The assassination of the Iranian general Qassem Soleimani in a surprise U.S. drone strike is being used by the Islamic Republic of Iran to political ends, says Iranian journalist and activist Reza Alijani. Interview conducted by Azadeh Fathi

Mr Alijani, there have been a number of huge funeral processions for Qassem Soleimani and Abu Mahdi al-Muhandis in both Iran and Iraq in recent days. Some Western media and analyses and some of his political opponents have called Soleimani the "shadow commander" or the "phantom". His supporters – who include both reformists and conservatives, as well as young Iranians – even call him the "Malik al-Ashtar of our time" (Malik al-Ashtar was a companion of Ali ibn Abi Talib, the first Shia imam – ed.) or the "enemy's nightmare" and consider him a national hero. In your opinion, why is Qassem Soleimani such a significant figure?

Reza Alijani: Opinions about Qassem Soleimani the man differ among Iranian citizens and political and civil society activists, and these different opinions are very clearly expressed, above all in social media. Officially, however, there are no opportunities to openly discuss this range of opinions. Let me give you one example: one conservative newspaper referred to the "killing" of Soleimani in a report instead of using the term "martyr". For this choice of words, it was roundly criticised and received an official reprimand. This one case shines a light on the regime's propaganda, which dominates the political climate in Iran.

The attitudes to Qassem Soleimani the man can be divided into three categories: the first group considers him a national hero and a great commander and defends him to the hilt. Then there are those who look exclusively to Soleimani's closeness to Ali Khamenei, his activities, his influence in the region and his role in Iranian foreign policy. For all of this, they are extremely critical of him. Some even celebrated his death. Finally, there is the third group, to which I count myself. This group sees Donald Trump's attack as a dangerous act of terrorism – an attack that could provoke a war – but does not disregard Soleimani's actions during his lifetime wholesale: as a young man, he served in the Iran–Iraq war, fought for the defence and independence of Iran, and later did his bit to fight IS. That being said, there is no denying the dark side to his political activities: Soleimani was one of the masterminds and military leaders that shaped Iran's foreign policy in Syria, Iraq, Lebanon, Yemen, Afghanistan and other parts of the region. 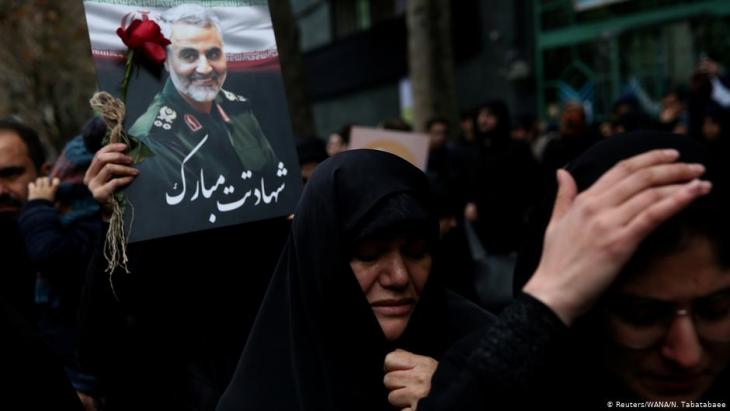 The legend of Qassem Soleimani: following the killing of the Iranian general and leader of the Quds Brigades, who was considered one of the most important architects of Iranian foreign policy, the situation in the Middle East is on a knife-edge. Even regime-critical Iranians appear to approve of Tehran's calls for revenge. Whether the strikes on Iraqi bases housing U.S. troops will satisfy Iran's desire for retribution remains to be seen

This was a policy that went against Iran's national interests and the wishes of most of the Iranian population. Several presidential elections in Iran have shown that a large majority cast their vote for candidates who were in favour of a policy of detente in the region. These votes were in opposition to Khamenei's agenda, who largely used his dominance to impose his own will on Iran.

As far as the size of the funeral processions is concerned, it should not be forgotten that they were organised by the state. Just like the leaders of the former Soviet bloc in Europe, the Islamic Republic is very adept at organising events that can be used for propaganda purposes. They also know how to disseminate them in the media. If there were opportunities for critics and opposition activists to hold demonstrations, there would certainly be no shortage of them. Nevertheless, figures from across the political spectrum – even those who are opposed to Iran's foreign policy – have condemned the U.S. attack. But this doesn't mean that they stand in solidarity with the regime.

Another important factor is Iranian national pride, which the religious regime always harnesses to fit the occasion. Matters of national security and sovereignty always overshadow other issues. This was the case with the Iran–Iraq war, the Iranian nuclear programme and the intervention in Syria. Using language designed to appeal to the national pride of the Iranians, Qassem Soleimani was portrayed as a hero defending the country's national security. Iran's military campaigns in the region were portrayed as a fight against IS which, as Khamenei was fond of saying, had to be fought on home soil – even though IS did not even exist in Syria at the time! Basically, in saying this, the powers that be were camouflaging their support for the Assad regime's crackdown on the Syrian population's protests, its relationship with Hezbollah in Lebanon and, therefore, the presence on the Israeli border, which was not to be relinquished at any cost.

In an interview with BBC Persian last Friday, you said that Soleimani's death would overshadow the November protest in Iran and result in stricter censorship. Could you be a bit more specific?

Alijani: The protests in November – in which hundreds of people lost their lives – unleashed a wave of compassion across Iran. Even people in the reformist camp voiced their empathy for the demonstrators, which didn't happen during the protests that took place in 2017/18. People from the most varied professions, artists, sportsmen and women, etc. issued statements stating their solidarity with the protest movement.

The shock felt within the conservative camp, however, was even more important. Exactly one day before Qassem Soleimani was assassinated, a letter that had been signed by over one hundred people was made public. The people who signed the letter all came from conservative backgrounds; several of them had in the past held leading positions in student militia groups at a variety of universities. In this declaration, important questions were put to the revolutionary leader, Ali Khamenei. It also pointed out that if the state insisted on maintaining its current course, it would go under. This letter could have been one of the most important items of news in Iran for a week and could have triggered some vital discussions.

The government was going through a serious crisis of legitimacy. The American drone strike allowed it to cast off the role of tyrant and portray itself as the innocent party who had been greatly wronged. And so, Soleimani's death was used to transform the hostile atmosphere that had spread within conservative ranks into a joint mourning of the alleged "hero of the nation", in order to create the impression that the majority of Iranians still back the regime. But as I already said, though a large number of the mourners sympathised with Soleimani and condemned the attack, they nevertheless remain critical of the government.

The powers that be in the Islamic Republic may have briefly succeeded in diverting attention away from the bloody developments of November 2019, but as soon as the initial emotion has subsided, the population's focus will return to the prevailing economic problems that plague everyday life in Iran.

What do you think will happen next?

Alijani: The escalation of the conflict between Iran and the U.S. will undoubtedly strengthen the hand of Iran's hardliners and will make the situation more difficult for political activists than it already is. The greater the threat from beyond Iran's borders, the more the already limited freedoms within the country will be restricted; an atmosphere of fear will be created which – as we have already seen from the example above – will lead to censorship and even self-censorship. It is up to everyone who cares about the future and the well-being of this country to call for calm and level-headedness and to counteract the conservative hardliners, who are in control of all means at all political levels.

Journalist Michel Abdollahi was born in Tehran in 1981 and moved to Hamburg in 1986. His big breakthrough came with his television documentaries on social issues such as ... END_OF_DOCUMENT_TOKEN_TO_BE_REPLACED

Iran’s contemporary poets are less well known in Germany than the old Persian classics. Kurt Scharf has now translated 32 of them into German. Marian Brehmer dipped into the ... END_OF_DOCUMENT_TOKEN_TO_BE_REPLACED

A heated debate is raging in the Islamic world about whether the religious and political spheres in Islam are one and the same. Before this matter can be settled, the terms " ... END_OF_DOCUMENT_TOKEN_TO_BE_REPLACED

Just one day after the UN Secretariat omitted Saudi-led forces from a "list of shame", an airstrike killed four children. The UN is under pressure to acknowledge Saudi Arabia's ... END_OF_DOCUMENT_TOKEN_TO_BE_REPLACED

Over the centuries Hafez' legacy has exerted a unique influence on numerous poets in Europe, with many an Orientalist falling under his spell. In interview with Yasmin Khalifa, ... END_OF_DOCUMENT_TOKEN_TO_BE_REPLACED

War, poverty, cholera – and now coronavirus has taken hold in Yemen. The country could collapse, aid organisations fear. A Yemeni journalist talks about the situation in her ... END_OF_DOCUMENT_TOKEN_TO_BE_REPLACED
Author:
Azadeh Fathi
Date:
Mail:
Send via mail

END_OF_DOCUMENT_TOKEN_TO_BE_REPLACED
Social media
and networks
Subscribe to our
newsletter