Another important factor is Iranian national pride, which the religious regime always harnesses to fit the occasion. Matters of national security and sovereignty always overshadow other issues. This was the case with the Iran–Iraq war, the Iranian nuclear programme and the intervention in Syria. Using language designed to appeal to the national pride of the Iranians, Qassem Soleimani was portrayed as a hero defending the country's national security. Iran's military campaigns in the region were portrayed as a fight against IS which, as Khamenei was fond of saying, had to be fought on home soil – even though IS did not even exist in Syria at the time! Basically, in saying this, the powers that be were camouflaging their support for the Assad regime's crackdown on the Syrian population's protests, its relationship with Hezbollah in Lebanon and, therefore, the presence on the Israeli border, which was not to be relinquished at any cost.

In an interview with BBC Persian last Friday, you said that Soleimani's death would overshadow the November protest in Iran and result in stricter censorship. Could you be a bit more specific?

Alijani: The protests in November – in which hundreds of people lost their lives – unleashed a wave of compassion across Iran. Even people in the reformist camp voiced their empathy for the demonstrators, which didn't happen during the protests that took place in 2017/18. People from the most varied professions, artists, sportsmen and women, etc. issued statements stating their solidarity with the protest movement.

The shock felt within the conservative camp, however, was even more important. Exactly one day before Qassem Soleimani was assassinated, a letter that had been signed by over one hundred people was made public. The people who signed the letter all came from conservative backgrounds; several of them had in the past held leading positions in student militia groups at a variety of universities. In this declaration, important questions were put to the revolutionary leader, Ali Khamenei. It also pointed out that if the state insisted on maintaining its current course, it would go under. This letter could have been one of the most important items of news in Iran for a week and could have triggered some vital discussions.

The government was going through a serious crisis of legitimacy. The American drone strike allowed it to cast off the role of tyrant and portray itself as the innocent party who had been greatly wronged. And so, Soleimani's death was used to transform the hostile atmosphere that had spread within conservative ranks into a joint mourning of the alleged "hero of the nation", in order to create the impression that the majority of Iranians still back the regime. But as I already said, though a large number of the mourners sympathised with Soleimani and condemned the attack, they nevertheless remain critical of the government.

The powers that be in the Islamic Republic may have briefly succeeded in diverting attention away from the bloody developments of November 2019, but as soon as the initial emotion has subsided, the population's focus will return to the prevailing economic problems that plague everyday life in Iran.

What do you think will happen next?

Alijani: The escalation of the conflict between Iran and the U.S. will undoubtedly strengthen the hand of Iran's hardliners and will make the situation more difficult for political activists than it already is. The greater the threat from beyond Iran's borders, the more the already limited freedoms within the country will be restricted; an atmosphere of fear will be created which – as we have already seen from the example above – will lead to censorship and even self-censorship. It is up to everyone who cares about the future and the well-being of this country to call for calm and level-headedness and to counteract the conservative hardliners, who are in control of all means at all political levels.

From the Kingdom of Elam to Alexander the Great, to the Shah dynasties and the Islamic Republic, Iran's cultural sites reflect its long history. ... END_OF_DOCUMENT_TOKEN_TO_BE_REPLACED

In recent years, Tehran had pushed a clever public-relations campaign to depict Soleimani as a Napoleon- or Caesar-like warrior-poet. He was even mooted as a likely presidential ... END_OF_DOCUMENT_TOKEN_TO_BE_REPLACED

Trump’s sweet revenge could swiftly turn bitter, after all the U.S. attack is a direct declaration of war against the Iranian Revolutionary Guard and its elite Quds troops ... END_OF_DOCUMENT_TOKEN_TO_BE_REPLACED

With "Assad or We Burn the Country", Sam Dagher has furnished the world with some genuine ammunition against the Syrian regime's on-going campaign of disinformation. The only ... END_OF_DOCUMENT_TOKEN_TO_BE_REPLACED 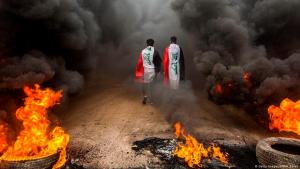 The resignation of Iraqi Prime Minister Adel Abdul Mahdi has not managed to quell the unrest in Iraq. After a deadly weekend in which many lost their lives, the wave of protests ... END_OF_DOCUMENT_TOKEN_TO_BE_REPLACED
Author:
Azadeh Fathi
Date:
Mail:
Send via mail