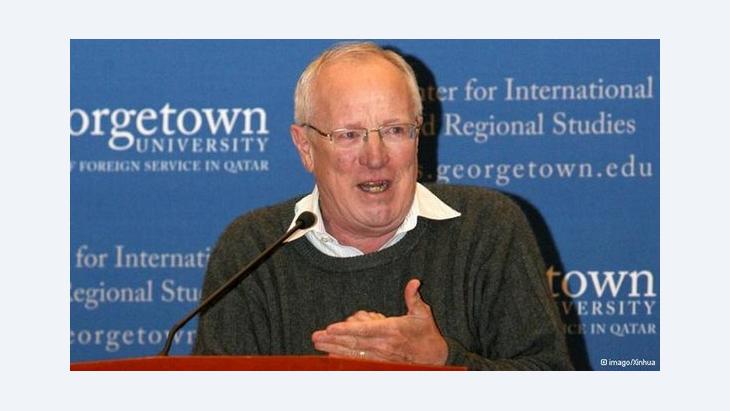 President Bashar al-Assad's troops in Syria are gaining ground. British Middle East reporter Robert Fisk met some of them when he visited the front lines earlier this month. Interview by Michael Hartlep

Mr. Fisk, you've just returned from Syria. What were your impressions?

Robert Fisk: What you find is that there are large areas which have been destroyed, large areas which are largely depopulated, and large areas which are not only undamaged, but in which life more or less continues. This applies not only to the centre of Damascus, it applies mostly to the city of Latakia, where there's a large Alawite community, and the same applies to Tartus. So you do find certain areas of Syria where the government is still firmly in control and where some semblance of life goes on. You can go out to lunch; you can shop; you can go to your office.

How freely can you travel around Syria as a western reporter?

Robert Fisk: I drove from Beirut to Damascus. During the day there are Syrian Army checkpoints, and the road is pretty clear. When you get into Damascus, you hear shellfire from the suburb of Daraya, which is less than a mile away from the main highway leading between Beirut and Damascus. 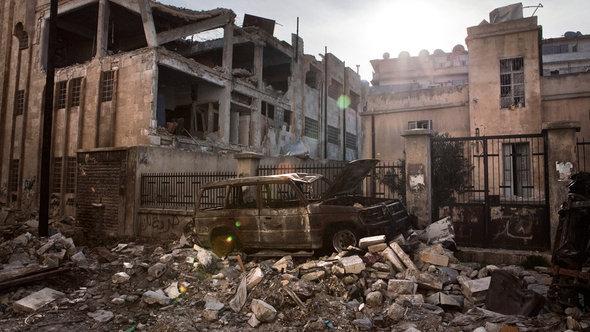 Destruction, chaos, human suffering: The United Nations estimates that over 70,000 people have died so far in the conflict. Nearly seven million people are in dire need of humanitarian assistance and over 1.3 million refugees have fled the violence to neighbouring countries, North Africa and Europe

What impression did you get from the Syrian government soldiers?

Robert Fisk: I found them a very ruthless, tough, but apparently pretty determined army. They clearly took no prisoners. They talked at one point about killing up to 700 terrorists, as they call the rebels. A general showed me a video on his phone of dead rebels with beards, and twice in the video a military boot appears and crushes the faces of the dead men.

Many of the soldiers I spoke to had been wounded. So they are tough, ruthless men on the government side, and we know the same applies to the rebels. And both sides, as we are well aware, have committed human rights abuses and war crimes. At the moment – but this does not necessarily mean it will last – the government forces in Syria are clearly taking territory from the rebels.

There are continual discussions about whether chemical weapons are being used in Syria.

Robert Fisk: We know that chemical weapons exist in Syria in the hands of the government, but there is no actual 100-percent proof that they have been used. The rebels say they have been used against civilians by Assad's forces, the Assad government says the rebels have used them. The United Nations has one report saying that rebels have used them, but there is no proof that Assad did. I put this to a senior military officer in Damascus, and he said, "Why would we use chemical weapons? We've got MIG-29s that drop bombs and cause far more damage."

In Washington, there is talk about arming the rebels and imposing a no-fly zone. What do you make of such ideas?

Robert Fisk: This has been going for two and a half years. I think the Americans think that as long as they keep talking, no one will point out that they're not actually doing anything. The problem now for the West is that the rebels they want to support are the Free Syrian Army, allegedly all defectors from the Syrian government army. They do not want to support the Islamist rebels with links to al Qaeda. But once the weapons cross the border, I don't think you can be pick-and-choosy about where they go. 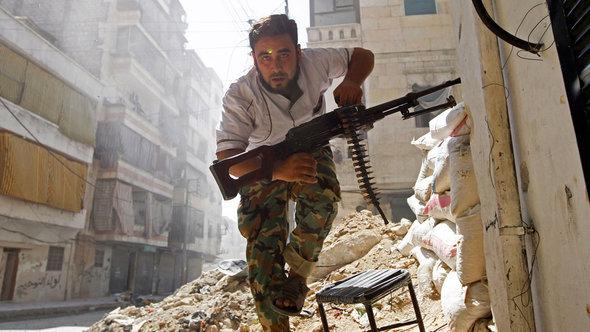 ​​So you've got this rather odd situation where we in the West are funnelling money, support and weapons to rebels who include al Qaeda, whereas in Mali, we're trying to kill all the al Qaeda people.

What role is Iran playing in this conflict?

Robert Fisk: The war is not about Syria, it's about Iran. And the intention of the West is to effectively destroy Iran's only Arab ally. And for the Iranians it's about keeping their only Arab ally. We know that the Iranian government has given advice, but these are very, very small token forces, compared to the propaganda, which is that thousands and thousands of Iranians are arriving en masse. I did not see any Iranian soldiers on any front line.

Media reports say that Russia intends to supply weapons to the Syrian government.

Robert Fisk: Ever since the Israeli raid on military installations north of Damascus two weeks ago the Syrians have been very concerned that they may find themselves under attack again by the Israelis. They want to be able to prevent this, and I think the Russians are quite keen to give them the weapons to do that.

Is there a danger that the conflict could spread to Israel?

Robert Fisk: Israelis America's greatest ally in the Middle East. If it bombs government forces, it's supporting the rebels. So in a sense, we in the West are now involved militarily, by allowing the Israelis as proxies to bomb Syria. But at the moment, I can see every reason why the Israelis would want to stay out of Syria, because the Syrian army in the last two years has broken free of the corruption, and it's become quite experienced in fighting. So if the Israelis did want to get involved on the ground in Syria, they'd find themselves fighting some very determined forces.

Would it be helpful for the international community to intervene in Syria?

Robert Fisk: Militarily, no. Politically, of course. I think the last talks between Kerry and Putin, where they actually went to talk at a joint conference, is the best thing we've heard so far politically. It's interesting that the Americans and especially the French don't want Assad regime people in a transition government. But they also don't want a very large rebel faction, the Islamist Nusra group, to be involved either, so already we're saying, "Let's have a big conference, but here are the people who cannot attend." I think the war is not over; I think it could go on for another two or three years.

Robert Fisk (66) is an author and Middle East correspondent for British newspaper "The Independent." For more than 30 years, he has reported from the world's crisis regions, including Northern Ireland, Portugal during the Carnation Revolution and Afghanistan. Since 1976, he has been reporting on the Middle East from his home in Beirut. Fisk speaks Arabic and is one of the few western journalists to have interviewed Osama bin Laden. He has won several

Home
Print
Newsletter
More on this topic
Israeli Air Attacks in Syria: Blinding Flashes in a Shadowy WarAfter the Bomb Attacks in Reyhanli: No Scruples in the Battle for SyriaThe Aftermath of the Arab Spring: The Changing Map of Middle East Power
Related Topics
Arab Spring, Arabellion, Syrian Civil War
All Topics

Dalia Hatuqa is an experienced journalist who has reported on the Israeli-Palestinian conflict from Ramallah, Washington DC and Amman. A writer for Time Magazine, Foreign Affairs ... END_OF_DOCUMENT_TOKEN_TO_BE_REPLACED

Since President Abdul Fattah al-Sisi seized power in Egypt in 2013, he has ruled the country with an iron fist. Civil society, opposition and free press struggle to survive. Tens ... END_OF_DOCUMENT_TOKEN_TO_BE_REPLACED

Very different Western reactions to the suffering in Ukraine and the Arab world show that there is a profound rift among cultures. Essay by Michael Young END_OF_DOCUMENT_TOKEN_TO_BE_REPLACED

Many Turks are dissatisfied with the international status of their country. At the same time, opinion polls reveal great scepticism among the Turkish population towards the USA. ... END_OF_DOCUMENT_TOKEN_TO_BE_REPLACED

Since Spain abandoned its traditional neutrality towards the conflict in Western Sahara, Morocco has announced a "new phase" in relations between the two countries. But what is ... END_OF_DOCUMENT_TOKEN_TO_BE_REPLACED
Author:
Michael Hartlep
Date:
Mail:
Send via mail

END_OF_DOCUMENT_TOKEN_TO_BE_REPLACED
Social media
and networks
Subscribe to our
newsletter