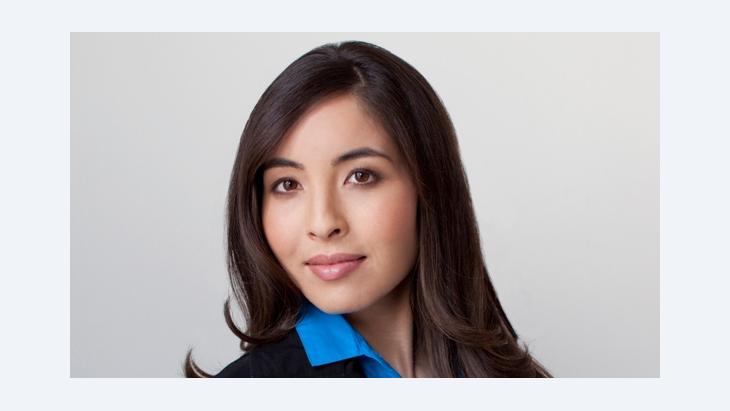 ﻿The Iranian-American journalist Roxana Saberi was ﻿sentenced to an eight-year prison term on bogus espionage charges in Iran in 2009. She was released following the intervention of US president Barack Obama. Saberi does not believe that the presidential elections in Iran on 14 June will bring major political changes. An interview by Tobias Köberlein

﻿Mrs. Saberi, you lived in Iran for six years before you had to leave the country following your release from Evin prison in Teheran. What do you miss the most?

Roxana Saberi: I think Iran is very mysterious for outsiders, but what I miss the most are the people, the friends I made there. They are so hospitable and curious. Many of them want better relations with Americans, with the outside world.

Recently you were blogging about handmade presents you were given by your former cellmates: a purse and a bracelet knotted together from the threads of your old towel in prison. How do you keep in touch with them?

Roxana Saberi: I don't have contact with them directly, but somehow these presents made their way to me indirectly. It took a couple of years. I think they made them in 2011 and I just got them recently. 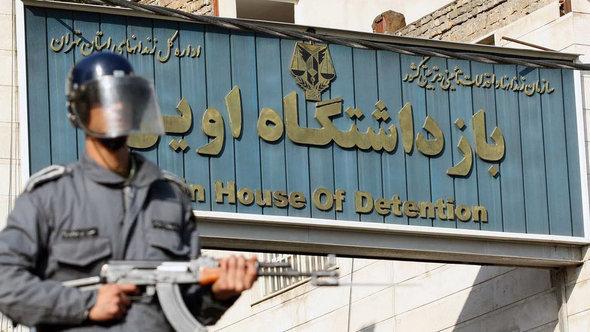 A wave of arrests: The New York-based advocacy group Human Rights Watch has in the past called on Iran to end solitary confinement and other abuses at Evin Prison. "Some prisoners have reported physical torture, sometimes they are in solitary confinement for a long time or don't have proper access to their attorneys," Roxana Saberi says

​​Has your experience in prison influenced or changed your work as a journalist?

Roxana Saberi: Yes, in some way I focus more on the human rights issues, for example the attorneys who are jailed in Iran, journalists who get imprisoned. I hadn't focused on them so much, because I didn't understand what it felt like to have your rights taken away from you.

Do you think it is possible to work as a correspondent in Iran without getting into trouble sooner or later?

Roxana Saberi: If you want to stay there for a long time you have to be very cautious. You need to consider your relations with the government. Sometimes the intelligence ministry might threaten you or interrogate you or interrogate the people you work with. When you work for a TV station there's an added complication. The authorities are very sensitive about what you film. I think journalism involves calculated risks. If journalists feel that they have taken the precautions and they are able to go and work in Iran that's wonderful, but they will face a lot of limits. It's a choice whether you're going to work there and censor yourself or not work there at all.

How would you describe the situation of the press in Iran, especially now considering the upcoming presidential elections?

Roxana Saberi: It has deteriorated a lot in the past four years and just earlier this year. There's a wave of arrests of journalists. It can be seen as a premonition for journalists reporting on the elections or reporting on certain aspects of the elections. At least 40 journalists are in jail. Many of them are under great psychological pressure. Some have reported physical torture, sometimes they are in solitary confinement for a long time or don't have proper access to their attorneys. So it's a very dire situation for journalists. 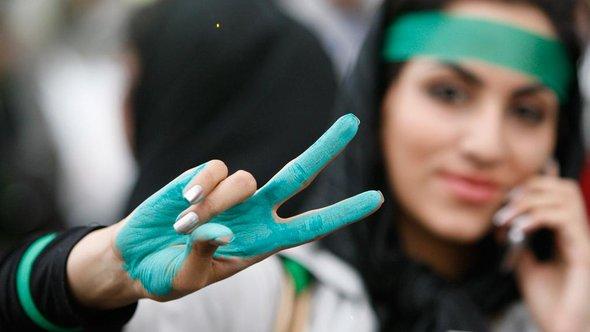 "Resentment under the surface": Iranians in favour of political change like to say that the Arab spring actually started in Iran with the Green Revolution of 2009. Ironically, the regime declared solidarity with the uprisings in the world, but at home they crushed peaceful protests and calls for reform

​​Many publications too are censored or shut down. It's been ongoing since 2009. According to Reporters without Borders, at least 200 journalists have fled the country. One reason why all these journalists were jailed is to send a message to them: You have to be careful, we are watching you.

What measures does the government take to restrict the access of Iranians to information?

Roxana Saberi: Sometimes they slow down the speed of the internet a great deal, so it's very hard to open web pages or emails. Twitter, Facebook and Youtube are filtered. Satellite TV signals coming from outside Iran are often jammed. The government also uses technologies to monitor Iranians' communications as well. Works of art like films have to get permission from the cultural ministry to be made, to be published or to be aired in Iranian theatres.

What do you expect from the presidential elections? Is there any hope for real change with the Supreme Leader Ali Khamenei having almost absolute power?

Roxana Saberi: Khamenei has the final say on all matters, that's true, but I do think the president has still some influence. I say that because I lived in Iran during Khatami's time and Ahmadinejad's time and I saw how things changed in many ways. Social freedoms, political freedoms and also the economy deteriorated. I don't know if any of the candidates who are running can bring great change, but maybe there will be different degrees of change.

Roxana Saberi: Hopefully there will be the opportunity for some minor freedoms. I don't imagine that they're going to free all political prisoners, but you can always hope for some positive changes. Iran is so unpredictable. I like to say that the only predictable thing about Iran is that it is unpredictable. 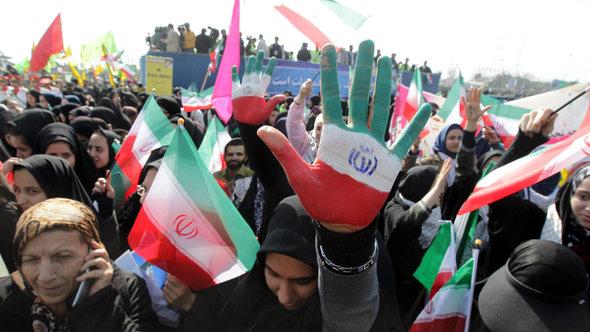 Increasing alienation: "We are more and more seeing young Iranians who are becoming disillusioned with the situation. Many of them were not alive at the time of the revolution or don't have memories of it. They don't think that it was their revolution," Roxana Saberi says. Pictured: Revolutionary parade in Tehran in 2013

The elections in 2009 obviously were flawed. The people took to the streets and demonstrated. Do you think this could happen again this time?

Roxana Saberi: Yes, that's possible. But many people are also very afraid. They saw what happened last time and many of them are not ready to die. Maybe some are ready to pay the price for more freedom, but they don't know what's going to come next. They know what they don't want. They don't want the status quo. A lot of Iranians are seeing what's happening in Syria. People are dying and the international community has a very minimal involvement. I think the Syrian situation is sending a message to the Iranians.

However under the surface there is a lot of resentment. It has become a lot more difficult in many ways, economically and in terms of freedom. If there's an opening perhaps these emotions will come forward.

Are there any similarities between the situation in Iran and what happened in Egypt and Tunisia during the Arab Spring?

Roxana Saberi: The Iranians like to say that the Arab spring actually started in Iran with the Green Revolution of 2009. There are some similarities, but also some differences. 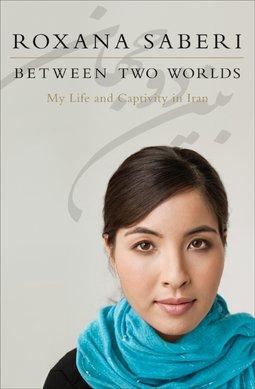 Roxana Saberi: "All Iranians I speak to love their country. Many of them want to make it a better place, but they don't know how"

​​In Egypt and Tunisia, the government was more reliant upon the West's good will. Iran is less so. Its allies like Russia and China are less likely to criticize Iran for human rights violations. Iran has also the Revolutionary Guards who are loyal to the regime.

In Erbil you reported on refugees coming from Iran into Iraq. What did they tell you about the situation in Iran?

Roxana Saberi: Mostly they told me that life is becoming very difficult. Housing and food are becoming very expensive. People are beginning to store the goods because of the inflation. The value of the rial has decreased straightly. This has caused a lot of problems, especially for Iranians who do business with the outside world. Nevertheless some Iranians are still able to have fun. They go to parties and they still find opportunities to enjoy themselves.

But isn't it true that especially young and well-educated people are leaving the country?

Roxana Saberi: All Iranians I speak to love their country. Many of them want to make it a better place, but they don't know how. So indeed Iran has a major problem with brain drain. We are more and more seeing young Iranians who are becoming disillusioned with the situation. Many of them were not alive at the time of the revolution or don't have memories of it. They don't think that it was their revolution. The well-educated people are in touch with the outside world through technology or through travel. They are well informed and they are aware of their human rights. More and more women have become educated too which is necessary for democracy.

Iran is suffering from an economic crisis. One reason is the sanctions that were imposed by the West following Iran's disputed nuclear program. What's your opinion about the sanctions?

Roxana Saberi: So far they haven't pushed the Iranian regime to compromise on the nuclear issue. I would prefer to see a way to put pressure on the regime instead of on the ordinary people, because many of them are suffering.

How can the people in the West help the Iranians with their struggle for more freedom?

Roxana Saberi: I think that everybody can play a small role. Every voice can make a difference. It might be just signing a petition for a prisoner of conscience. When I was in prison in Iran I heard that 25,000 people had signed a petition online. It was sent to the Iranian mission at the U.N. Our voices might not free every prisoner of conscience but it helps to empower these people and helps them to realize that they are not alone.

Roxana Saberi was born in 1977 in New Jersey to an Iranian father and a mother who emigrated from Japan. She began studying in Teheran in 2003 and worked there as a journalist. Saberi wrote a book about her experiences, "Between Two Worlds: My Life and Captivity in Iran".

Iranian author Fariba Vafi is adept at describing everyday scenes and concealing within them something ambiguous, in parts strange and grotesque. She writes novels – which have ... END_OF_DOCUMENT_TOKEN_TO_BE_REPLACED

In her latest exhibition in Japan, Farzaneh Khademian depicts figures who seem detached from their surroundings. In interview with Qantara.de, the Iranian photographer and painter ... END_OF_DOCUMENT_TOKEN_TO_BE_REPLACED

The catastrophic human rights situation in Bahrain is being largely ignored by the rest of the world. Despite all the damning evidence, which includes a Human Rights Watch report ... END_OF_DOCUMENT_TOKEN_TO_BE_REPLACED

Talks to salvage the 2015 Iranian nuclear deal have entered their eighth round in Vienna. Even if a deal is struck and some of the sanctions are lifted, the state of the Iranian ... END_OF_DOCUMENT_TOKEN_TO_BE_REPLACED

Every year in December, the team at Qantara.de takes a look back at the articles that proved most popular with our readers. This year is no different. Here is a run-down of the ... END_OF_DOCUMENT_TOKEN_TO_BE_REPLACED

END_OF_DOCUMENT_TOKEN_TO_BE_REPLACED
Social media
and networks
Subscribe to our
newsletter