"Europeans Have Missed an Oportunity"

Iraqi film director Saad Salman underlines the importance of the American presence in his country of origin and regrets that France, his home for thirty years, did not help in the downfall of Saddam Hussein 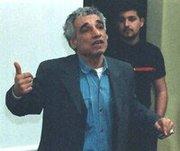 Thirty years of fascism have created a culture of hypocrisy and the gap has widened between Iraq and other nations, says Saad Salman

​​Following his documentary Baghdad On/Off, an undercover "road-movie" filmed in Saddam Hussein's Iraq, Saad Salman returns to Iraq to undertake a new film. In order to be immersed in the atmosphere of Baghdad, he decides to write the script in the city itself rather than in Paris where he had been exiled since 1976.

Though he is involved in the reconstruction process, Saad Salman goes to great lengths to remain independent of the political forces active in the country. He has refused many an important political post and does not belong to any party, which in fact remains his main liability.

How was your experience of returning to Iraq after all those years spent in France?

Saad Salman: I have the same impressions as those which I had upon my arrival in France thirty years ago. Weirdly, I feel like a foreigner in Baghdad. Everything has radically changed, be it codes, symbols or ways of speaking… Take clothes for example: in my time, going out in a djellaba [veil] in Baghdad was greatly frowned upon whereas now it seems perfectly normal. Nowadays, it is practically impossible to see a woman without a veil in the street. Desert nomads and villagers have migrated to the city and "urban manners" have disappeared. We are witnessing a regression.

Are conflicts between communities in Iraq tangible?

Salman: I personally do not feel either Sunni or Shiite but Iraqi! We do not feel tensions on the streets. However, political problems create an artificial uneasiness. There are forces internal and external to Iraq, notably France, who play upon the conflicts between communities in order to abort the American project.

What is your opinion of the role the Americans are playing today?

Salman: We cannot judge what the intervention will bring, but it is clear that it has been positive with the downfall of Saddam Hussein. The Americans' problem is the Iraqis themselves. It is difficult for the Americans to meet an Iraqi interlocutor. Thirty years of fascism have created a culture of hypocrisy and the gap has widened [between Iraq and other nations].

Iraqis and Americans do not understand each other. The Iraqi people want an American presence that goes beyond military operations: experience, technology. One cannot fight against a small mafia with tanks and helicopters. The Americans would use an atomic bomb to kill a rat!

Is the climate today one of hostility or one of hope?

Salman: We are far from civil war. Before, those who would commit violence would do so in silence or in the name of the state. Now, they are not part of the state apparatus anymore, but the criminal instinct remains. They have changed sides and have come to target and kill civilians. Also, one needs to keep in mind that these are minorities that work for various secret services in Iraq.

But Iraqi society has proved resilient: in twelve years, it has managed to avoid civil war. The political process is underway and it is now impossible to go back. The Middle East as a whole will benefit from these ameliorations in Iraq. In spite of all the obstacles, the ten million Iraqis are actively involved and not a single one will accept the return of a Fascist regime.

What do Iraqis hope for from the European troops?

Salman: For the Iraqis, Europe is not one entity but many different countries. If France claims to incarnate Europe and hide behind it, that is its affair. The French bet on one person [Saddam Hussein] for thirty years, but this is not the Iraqis' fault. France had the chance to join in the liberation and now it is paying the consequences of its choices.

In general, the Iraqis resent the military presence; they would rather have a force that protects the evolution of the political process without intervening in it. We are threatened by the Iranians, the Turks, the Jordanians, the Syrians, the Saudis, and so the American presence seems necessary. The Europeans have missed an opportunity! Even though some European countries are present in Iraq, France and Germany, old allies of Saddam's regime, are not two of them. Thus Europe does not speak with one voice.

Translated from the French by Abla Kandalaft

Commentary Volker Perthes
Stability Must Be the Primary Aim of Iraq Policy
Despite continuing disagreements with the U.S. administration, there is no "schadenfreude" on the European side regarding the predicament the US is facing in Iraq today. Volker Perthes of the German Institute for International and Security Affairs presents a catalogue of suggestions for a new Iraq policy.

"Baghdad Stories"
How Children See War
A few weeks after the end of the war in Iraq, the German journalist Philipp Abresch travelled to Baghdad and gave 170 disposable cameras to Iraqi children and young people. They produced innumerable photos from the crisis-torn region, most of them focusing on the civilian population. Anna Bilger reports

Embedded Journalism
When War Feels Like War
How does war feel to those who report on it? In the documentary film "War feels like War," the filmmaker Esteban Uyarra portrays journalists who covered the war in Iraq without the cover of helmets, bullet-proof vests, or the American military

END_OF_DOCUMENT_TOKEN_TO_BE_REPLACED
Social media
and networks
Subscribe to our
newsletter