"A Dialogue Means That I Show My Own Weaknesses"

"Islam and I" is the title of a volume of essays by Iranian-born lyricist and writer SAID recently published by C. H. Beck. In an interview with Claudia Kramatschek, the author speaks of his relationship with Iran and religion 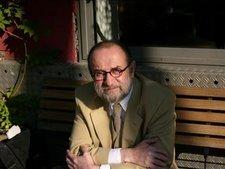 "Islam gone wild – this must be dealt with politically, not theologically," says SAID

​​"According to my social background, I am Muslim," proclaims one passage in the new book. But how does the fact that the social environment in the West has grown ever more hostile since 9/11 affect SAID's relationship with a religion that he has never practiced?

SAID: The fact is that I have never practiced any religion my whole life, nor do I disdain any religion – and I will hopefully never do so! – and hopefully I am also beyond the point of ever spurning or rejecting this environment.

It's all a question of my childhood: after all, I grew up in an Islamic country, although my family was never religious and always left me to decide for myself in these matters – thank God! But you do see, you hear and you obey certain rules and through this you gain a certain respect for the religious feelings of others – that goes for all religions.

In recent years – thanks to a few bombers from Islamic quarters – an attitude has naturally sprung up in Europe that likes to place Islam in this corner. I immediately go on the warpath when I hear or see something like this. Because people have to start asking themselves, especially in the West, just why it is that Islam has felt it necessary to resort to bombs during the past 20 years.

When someone says to me that this is part of the Koran, I reply: If it is in the Koran, why did Islamic bombers not take action in 1930? It is the social environment, to stick to that term – or it is the legendary gulf between the rich and the poor that time and again leads to such acts.

I can't just say: Now that I'm in Europe, now that I have a German passport – let's just forget everything that went before. That would be a post-colonial attitude. If you carry everything with you, you also carry grief with you. I know that in post-colonial times this term has become very unpopular. But I hope that I can do this until the end of my days. Because I do not want to deny or renounce what I am for any price.

Don't you sometimes get tired of people in the West asking you to explain Iran to them?

SAID: I try to refuse playing this part by telling stories or by reciting the bare facts in order to shed the role of explainer. In the new book I repeated news items almost verbatim that I got from the Iranian and German press. By doing so, I hope to reveal fractures in reasoning. If I can do that, then I don’t need to take on the role of explainer.

Which is, for one thing, a thankless task. And, second: I have learned that this is not the way to get anywhere. Because when prejudices are this old and people have already made their minds up that we in the West are all enlightened democrats, we have human rights and those people over there have nothing – then there is nothing left to explain. I can merely supply the material.

Love, you write in your new book, means accepting the fractures along with the rest of the relationship. Is Iran still beloved to you in this sense?

SAID: Let's put it this way: the country is beloved, certainly. But it is, as I have often written, a young love that has by now grown up to become a public lady. This is something you suffer from. Basically, you suffer from your own memories and your own images.

To cite a very banal example, some of my friends are allowed to return to Tehran and tell me then: You can't live in Tehran these days because you can't take a walk there anymore. No one can take a walk there anymore – it’s an Americanized world, where people drive cars and honk, and everyone is in a hurry. This is a very banal example – but I always loved the Tehran I came to know through my walks. If that is no longer possible, then the access to this loved one is blocked.

But this is ultimately the tragedy of every emigrant: the emigrant has a kind of homeland in his mind, and this picture is static. Reality is something else again. When the emigrant returns, these two levels collide. I don’t have to point out who gets left behind.

'Love' is in fact a core concept in your books – it is also the core concept of religion, the substance of which forms the focus of your new book. In your opinion, is there too little or rather too much religion today?

SAID: I would say, there is too little religiousness. For me, it's about the emotion, about the attitude of being moved by religion. It's not about a building, a mosque or a church. It's about the daily practice of religious rituals, no matter which ones. For me, it's a question of the attitude of being moved. And this is an attitude that is disappearing of course, time and again. Or it comes through the back door, time and again.

Just think about the Pope's visit to Cologne, about the unbelievable crowds of young people who went there, and think of how these young people sometimes admitted aloud for the camera that they used condoms when having sex, although the Pope has forbidden it. But they did not see any contradiction in making the pilgrimage there – and then uttering this sentence.

This is proof of my thesis that religiousness still exists beyond cardinals, bishops and mullahs. And that people need this kind of religiousness.

How close, or how far apart, are Christianity and Islam – and hence Islam and the West?

SAID: That is, like everything else having to do with religion, a question of interpretation. To cite a mundane example: When Ayatollah Khomeini proclaimed a fatwa against the Indian/British writer Salman Rushdie, the president of Al Azhar University in Cairo, the oldest university in the Islamic world, explicitly distanced himself from this decree. Both are Moslems!

The way I interpret Islam, I have no problem with the connections to Christianity. Remember that when the former Pope visited Syria, he entered a mosque accompanied by the chief mullah of Syria. Remember that in Indonesia Muslims and Christians still pray together, after all that has happened. This is always possible.

Islam gone wild – this must be dealt with politically, not theologically. Since negotiations have been taken up between Israel and Palestine, the attacks have decreased. The Palestinian as such is after all not an animal that’s gone wild. Islam in and of itself is not per se anti-Semitic or anti-Christian.

But isn't the West also an animal gone wild?

SAID: The West is wild in its own gentle way, this is something the West has always been very good at. I can't help noticing time and again that the West seeks a dialogue – without showing the willingness to listen. This is why I also say in my new book: A dialogue means that I show my own weaknesses. You can’t hold a dialogue without getting down off your high horse.

I think back on the advertising slogan used by an American pharmaceutical company: 'We have the medicines, the people in the South the diseases.' That's just the problem. And that's what we need to do something about. Whether the West will ever understand this, I don't know. And bombs are of course no way to send the West a wake-up call.

What do you think of the growing interest in Iran in the West? For example, authors like Navid Kermani or the comic book Persepolis, or "Reading Lolita in Tehran" by Azar Nafisi.

SAID: I am pleased about it. After all, I know very well that Iran has more to offer than a few bombers, a few killers and a few preachers of hatred. In all of my books, I have tried to show that a flourishing literary landscape exists there – considering all that is happening. "The long arm of the mullahs" actually consists of these kinds of news items: that Günter Grass has been published. That Hans Magnus Enzensberger has been published.

This country is not dead in terms of literature and culture. We are not living in the 18th century, and the country has always been open to the outside world, in particular to the West. And perhaps every citizen here in the West now realizes that the country also has comic artists, has authors, conducts lively cultural discussions, and is not made up only of bombers – and of victims.

Even today, people who attend my readings still ask me if Iranian women are allowed to go to university. The joke is: 70 percent of Iranian students are women. And you can find that out from the German newspapers!

Marjane Satrapi's "Persepolis"
East Is Not East, West Is Not West
In the cartoon novel "Persepolis," Iranian illustrator Marjane Satrapi has created a sensation with the story of her childhood in Iran. The book has been translated into several different languages and has met with enthusiastic acclaim. Petra Tabeling spoke with the artist

END_OF_DOCUMENT_TOKEN_TO_BE_REPLACED
Social media
and networks
Subscribe to our
newsletter