No Straight Whiskey for the Detective

German-Persian author Said has just published a new collection of poems. Here he talks to Claudia Mende about his "Psalms", the Teheran of his childhood and the problems facing the cultural scene in Iran today 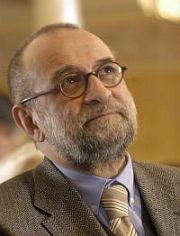 Said: "The Islamic mystic disputes with God just as much as the psalmist and the Christian mystic does. He does not need the mullahs"

​​Mr Said, why did you choose to call your latest collection of poetry "Psalms"?

Said: An important turning point in my life came in 1979, the year the Islamic Revolution broke out in Iran. This revolution has allowed the most dreadful crimes to be committed in the name of God, but I try, in spite of this Islamic republic, to preserve my own sense of what religion means. When, shortly after the Revolution, I had to leave Iraq and return to Germany, I began to order my thoughts on the subject and to search for a suitable form with which to express them. The psalms appealed to me because they contain a direct address to God. I chose the form to help me express emotions such as anger and rage.

Is there no comparable form in the Islamic tradition?

Said: No. Islam acknowledges the psalms as a part of the Bible, but nothing similar exists in the Islamic tradition. I have been collecting material for eleven years, and have read the Bible in various translations, not only Luther, but modern translations too, such as Romano Guar¬dini or Walter Jens, who unfortunately did not translate the psalms. I wanted to ensure that my language was right and able to express my feelings. In the course of my research my respect for religions increased and that is something I want to hold on to.

Does Islam allow its followers to quarrel with God?

Said: Islamic mysticism does permit this kind of prayer. But taking issue with God is something the Islamic tradition frowns upon. This is why Islamic mystics in Iran are still strongly criticised. Mystics are libertarian characters. They say that whatever takes place between God and themselves is no one's business but their own. Many of them have been great poets. The Islamic mystic disputes with God just as much as the psalmist and the Christian mystic does. He does not need the mullahs; God, he believes, is within himself, and he has no interest in mosques. But the Iranian state sees things differently. It says: I am God and you must obey – end of story.

How did the Iranian Revolution change things for you?

​​Said: My religiosity has changed, not my religion, I still do not enter any mosques, churches or synagogues. To me these are nothing more than the husks of religion. For me it is much more about emotion, the personal feeling that each of has to a greater or lesser extent. I do respect the religions, I just object to their being soiled and sullied by the crimes of those in power in Iran. And the greatest of their crimes has been bringing Islam into disrepute. Independent investigations have proven that Iran is the country with the lowest number of mosque-goers. People have simply stopped turning up.

What was the religious climate like in the Iran that you grew up in?

Said: I myself don't come from a religious family. When I was about 16 years old and going to school in Tehran some of my classmates used to fast for Ramadan. The whole class respected this. During breaktime everyone was careful not to eat in front of them, we didn't even smoke. I found that wonderful. Friends who spent time in prison have told me that even the staunchest Communist inmates would respect the religious fasting. Respect for religion has always been part of the Iranian tradition, but the powers that be in the country at present have all but overseen its demise. It pains me greatly to see it.

It is very difficult for writers in Iran today. Is there anything you can do to help them?

Said: During my time as president of PEN, I was able to get some funding from the German government. We could use this to bring writers from other countries, including Iran, to Germany and to provide them with a grant that would permit them to continue their work here. My successor is continuing the work. Awareness of the issue has definitely grown in Germany as a result. Apart from that, each of us tries to help to get the authors' books published, not an easy task. If the German foreign minister mentions specific names in his discussions with Iranian politicians that already provides a certain degree of protection. If writers are published in Germany then there is the possibility of doing something to help them indirectly.

Has life in the cultural field become any easier now in Iraq?

Said: Just the opposite. The situation has dramatically worsened since Ahmadinejad came to power. He may not have changed the law but he has certainly made things significantly worse in practice. Although it is still the case that anyone who wants to publish a book has to submit it to the censor, the new president has made one man responsible for the whole thing – an assistant bookseller. He holds court every Monday. Books are handed in and a long wait follows. If approval is given, after eight months, or three years, the publisher will finally print the book. But even after it has been printed, the book has to be submitted to another bout of government scrutiny.

Said: They find something they don't like and the entire run has to be withdrawn by the printer. As a publisher, if you have to do this twice you are ruined. Authors try to get around this by sending their novels to exile publishing houses in other countries. Now comes the arabesque: a few months later the novel will turn up in a pirate version in Tehran.

Is that not risky for the authors?

Said: That depends on the officials. It is completely arbitrary. The publishers are now saying to the authors: I'm not going to the censor's office - you go!

Things are a bit easier in the case of translations. A friend translated two crime novels into Persian. They featured a detective character who was a whiskey drinker. The translator got a call from the censor and, because they knew one another, the censor suggested that the detective should become a Fanta drinker in one of the books; in the other he could have whiskey. The translator agreed and made sure that his book got published. It's all about bargaining. Iranian readers immediately understand what is meant. It sharpens the perceptions of the readership to an extraordinary degree. They are very aware.

Portrait Schahriar Mandanipur
Finding the Source of Misfortune in the Past
Schahriar Mandanipur has brought a new perspective to Iranian literature. His characters often find themselves confronted with extreme situations, thus being forced to grapple with existential issues. A portrait by Bahman Nirumand

Domestic Policy in Iran
Intellectuals and Civil Society under Fire
The more pressure Iran's foreign policy brings down on the country, the easier it is for the government to stir up citizens' suspicions of both internal and external enemies. The victims are intellectuals, artists, and journalists. By Bahman Nirumand

END_OF_DOCUMENT_TOKEN_TO_BE_REPLACED
Social media
and networks
Subscribe to our
newsletter