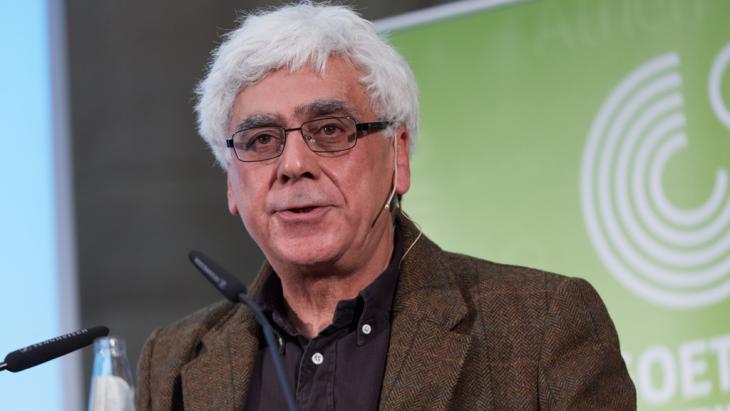 Sari Nusseibeh is a Palestinian philosophy professor and was president of al-Quds University in Jerusalem from 1995 to 2014, where he still teaches. For many years, he was the most senior Palestinian official in East Jerusalem. In this interview with Sabine Peschel at the recent Goethe-Institut conference "Dialogue and the experience of the other" in Berlin, he speaks about Israeli–Palestinian negotiations, the upcoming elections in Israel, the legacy of the Arab Spring and the rise of Islamic State

Sari Nusseibeh: I believe it was the German Foreign Minister who said something like "we should encourage civil society dialogues alongside formal dialogues between conflicting parties". Now, as far as the Palestinian case is concerned, I am not sure exactly whether this method would in fact apply today. You have to understand that for the Palestinians, dialogue has existed in different forms for many years, right from the very beginning of the creation of the state of Israel. There were Palestinian-Israelis who dialogued with Israeli-Israelis. After 1967, the dialogue that took place was predicated on the fact that neither side recognised the other. This kind of dialogue was exploratory. It culminated in the actual negotiations, so in a sense, dialogue exhausted itself in those negotiations between the two sides and with a mutual recognition by the two sides. As a result of the negotiations it was hoped that there would be peace between the two sides, but unfortunately the negotiations failed.

Now, if you ask me should we go back to dialogue, it's like telling me we are going to go back in history to the 70s and 80s in order to finally reach a negotiation. I am not sure that this is the way to do it, at least not if we understand dialogue from the Palestinian perspective.

So what else is there? Do you see no solution? What are the prospects? 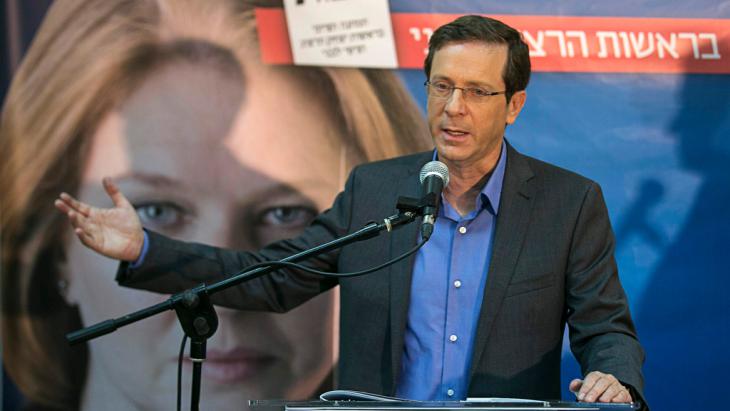 Isaac Herzog, head of the centrist Zionist Union party, holds a news conference with party co-leader Tzipi Livni (silhouetted behind him) in Tel Aviv to introduce the party's platform for the 17 March election. Says Sari Nusseibeh "I don't really expect that the formation of a new government […] would be able to deliver what previous governments in Israel have so far failed to deliver, namely an acceptable two-state solution for the Palestinians"

Nusseibeh: Well, given the experience of the history of negotiations so far one can't be very optimistic that they will conclude soon or be successful. I think we are going to end up with a growing reality which is already there: a one-state, single system in which you have Israeli-Israelis in control and in which you have the Palestinians living in the basement of the system.

Nusseibeh: For me, as far as the relationship with the Israelis is concerned, I have always been in favour of being guided by a basic principle that I call a principle of parity or equality. To me, that is reflected or can be translated into two kinds of solutions. One is that the territory between the Israelis and the Palestinians is partitioned so that the Israelis have their state and the Palestinians have theirs. The other is division of rights among individuals so that each individual, Israeli or Palestinian, will have equal rights under the same system. Now if, as seems likely, the negotiation for two states will fail, then I or anyone else will have no other choice but to try and push towards the single state that should be democratic, secular and pluralistic and should offer freedom for all, because nobody will have an alternative.

Do you think the upcoming elections in Israel will bring about change?

Sari Nusseibeh: I'm not in a position to tell, but as far as I can make out, Israel as a whole is shifting to the right. Most likely what we will end up with is more or less a repetition of what we've had. But even if we don't – even if the Labor Party manages to get some votes and even manages to get into government and shares power with Likud or whatever – I don't really expect that the formation of a new government, even in that kind of scenario, would be able to deliver what previous governments in Israel have so far failed to deliver, namely an acceptable two-state solution for the Palestinians.

In all likelihood, the settlements and the further implantation by Israel of itself in the territories it occupied back in 1967 and above all Jerusalem will just continue, making it impossible for us – Israelis or Palestinians – to reach a two-state-solution. This basically means that a little bit further down the road, I think both Israelis and Palestinians will have to start thinking seriously about a one-state solution. 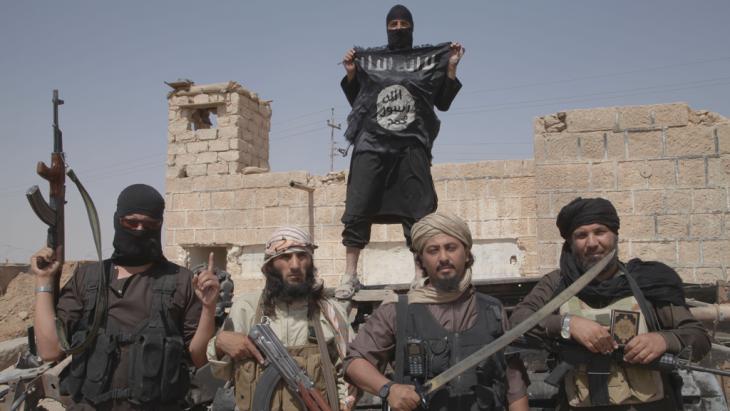 Islamic state fighters on the border between Syria and Iraq in July 2014. "In a sense, we need a rebirth of an Islamic message that makes sense, that reflects what I think is truly or genuinely felt by lay Muslims. We also need to have proper political systems. I think that if we had those two things, then it would be much harder for movements like IS to grow faster and become strong," says Sari Nusseibeh

It's been four years since the Arab Spring. One could say that with the exception of Tunisia, the revolutions in the Arab countries more or less failed. For the most part, developments have been disappointing. Did you expect this? Or were you initially more optimistic?

Nusseibeh: It is a question of what period of time you are looking at. Of course, if you are expecting a major transformation from black to white within one, two or three years, then you will be disappointed. If you look at what happened in the Arab world as part of a historic movement of change, then you will look more reasonably at what happened.

It was a major experience for the Arab people; it awakened people's minds to what is possible; it alerted them to the pitfalls of what might happen, to the counter revolutionary trends that can take place. It alerted them to both the power that they have but also to how it can be misused and monopolised.

How can you describe this as a failure? It's an experience. I expect that as an experience, over time, if you look further into the future, the Arab people will hopefully learn from it so that the next time it comes, in whatever form, people will be better able to transform their lives. But certainly if anybody expected us to suddenly live without authoritarian rule and corruption, they were disappointed.

When you look at the situation in Syria and the advance of Islamic State, who do you think is responsible for this disastrous development?

Nusseibeh: Well, among others, the people who carry primary responsibility are the people themselves, in other words the Muslim people, the country, the religious leaders and the political authorities in those countries. We cannot blame the outside world for those ills that have grown among us.

On the one hand, there is a very important need for us to have political authorities that are actually credible and democratic, that provide opportunities for the people in their countries: job opportunities, life conditions that provide dignity etc. On the other, we also have to have a liberal space for free thought, including religious thought, and we have to have more courageous religious leaders, which unfortunately we don't have. Most of the people who are supposed to be religious leaders are employed by their governments, so they don't command credibility or respect among the Muslim people.

In a sense, we need a rebirth of an Islamic message that makes sense, that reflects what I think is truly or genuinely felt by lay Muslims. We also need to have proper political systems. I think that if we had those two things, then it would be much harder for movements like IS to grow faster and become strong.

Home
Print
Newsletter
More on this topic
General election in Israel: Elections for nothingInterfaith dialogue in Palestine: Reviving a heritage of peaceful co-existenceIsrael's crisis politics: On hope and despair in the Middle EastReconciliation between Hamas and Fatah: No peace without Palestinian unityAlternative Nobel Prize for the Palestinian Raji Sourani: "We just don't have the right to give up hope"
Related Topics
'Islamic State' | IS, Arab Spring, Arabellion, Israeli settlement, Israeli-Palestinian conflict, Israeli-Palestinian dialogue, Middle East peace process, Sari Nusseibeh
All Topics

Algeria‘s regime is again cracking down on anti-fracking activists and the unemployed in the country‘s south. Yet EU countries remain keen to scale up their energy cooperation ... END_OF_DOCUMENT_TOKEN_TO_BE_REPLACED

Bachtyar Ali sends the hero of his latest novel – "Mein Onkel den der Wind mitnahm" – literally flying. Jamshid is so thin after his years as a political prisoner that a gust of ... END_OF_DOCUMENT_TOKEN_TO_BE_REPLACED

For a century, the Kurds and other minorities in Turkey have been subject to state repression. With his dissertation "The Kurdish Question in Turkey", political analyst Ismail ... END_OF_DOCUMENT_TOKEN_TO_BE_REPLACED

Anti-Semitic motifs have no place at Germany’s documenta art show or anywhere else in the world, stresses Meron Mendel, director of the Anne Frank Educational Centre in Frankfurt ... END_OF_DOCUMENT_TOKEN_TO_BE_REPLACED

A new exhibition, "Syria – Against Forgetting", at Cologne’s Rautenstrauch-Joest-Museum focuses on Syria's artistic and cultural heritage and pays tribute to the country before ... END_OF_DOCUMENT_TOKEN_TO_BE_REPLACED

Madrid's about-face on the Western Sahara conflict has enraged Algeria. Trade relations have been frozen unilaterally and a cut in gas supplies to Europe could be in the pipeline ... END_OF_DOCUMENT_TOKEN_TO_BE_REPLACED

Comments for this article: "Israelis and Palestinians will have to start thinking seriously about a one-state solution"

Two-State, one-state or an apartheid state?

Ideally the two state-solution must be adopted if Israel wants to remain Jewish and democratic. If the two-state solution is not achievable, then the one-state solution will be inevitable. Then the choice is stark. We either have a fully democratic one-state for all the inhabitants of Palestine/Israel regardless of religion or ethnicity with full equal rights for all. This would mean a Palestinian can live in Haifa or Tel Aviv and an Israeli can live anywhere in the West Bank. The alternative would be an apartheid state of the South African type of the 1970s and 1980s. In this kind of state, Israel will cease to be democratic and we shall have Soweto type townships, ghettoes, and a new cycle of struggle. A one-state solution envisaged by Sari Nusseibeh offers some hope for the future. The alternative is grim for both Israelis and Palestinians.

END_OF_DOCUMENT_TOKEN_TO_BE_REPLACED
Social media
and networks
Subscribe to our
newsletter