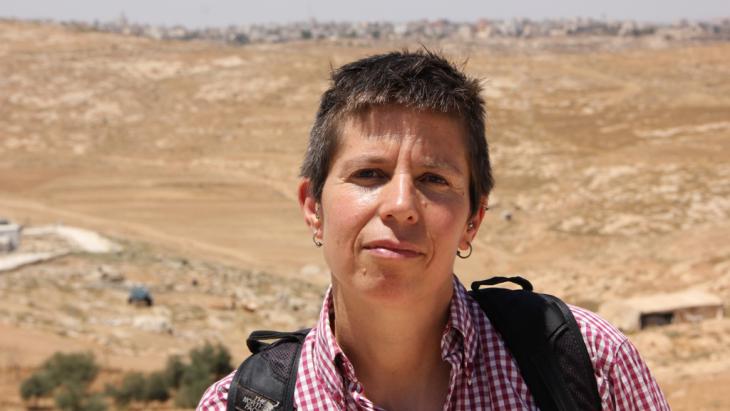 The NGO B′Tselem investigates human rights violations committed by the Israeli military in the Palestinian territories. In interview with Kai Schnier, Sarit Michaeli, the organisation′s spokeswoman, explains why a peaceful settlement of the conflict between Israelis and Palestinians is receding into distance and neither politicians nor generals are interested in reducing the tension

Ms. Michaeli, with the death of Shimon Peres, Israel recently not only lost a popular statesman, but a staunch advocate of a peaceful solution to the Israeli Palestinian conflict. Until the very end he supported the two-state solution. How likely is it that Peres′ wish will eventually come true?

Sarit Michaeli: According to the official line proclaimed by Prime Minister Benjamin Netanyahu, the Israeli government is still working on a two-state solution. Talking privately with ministers and Knesset delegates, however, one realises that such a solution has long been abandoned. The alleged interest in working towards reconciliation between Israelis and Palestinians is nothing more than political lip service.

On what do you base this allegation?

Michaeli: One of the most basic preconditions for a two-state solution is the creation of a unified Palestinian territory in the West Bank. Israel is actively working against that. Today, between 650,000 and 700,000 Israeli settlers are living beyond the agreed-upon external borders of Israel. The occupation of the Palestinian territories is not only being upheld, it is being advanced on a daily basis. In a gradual process, Israel has practically annexed some twenty percent of the West Bank. By building a network of roads, fences and checkpoints, Palestinian settlements have been separated from each other. All the while, the Israeli military has tightened its grip.

Michaeli: It is blatantly obvious that the Israeli settlement policy is inconsistent with international humanitarian law. Incredibly, it has failed to evoke any meaningful backlash by the international community so far. Its insidious nature has tricked foreign observers. What if the occupation of the West Bank had been a single operation rather than a gradual process? Hundreds of thousands of settlers would have migrated into Palestinian territories overnight, under the protection of the Israeli military. They would have claimed the resources at hand – water, quarries, pastures – and thereby literally have broken all existing peace agreements. Now imagine the international protest that this would have caused. Instead, the Israeli government is slowly and steadily infringing international agreements. 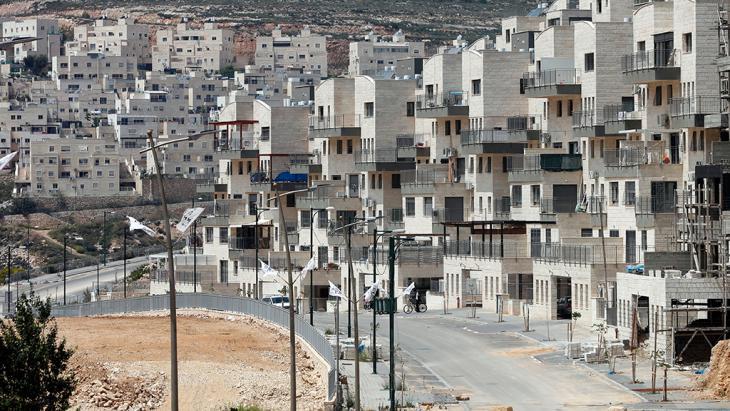 Ongoing programme of settlement building: according to Israeli activists, the government recently approved the construction of 98 apartments near Ramallah. A total of some 300 apartments are in the pipeline. The settlement of civilian populations in areas occupied by the military, an activity that Israel has been systematically engaged in since 1967, is regarded by the UN as a contravention of international law as expressed by the Fourth Genevan Convention. The international community of states sees the ongoing programme of settlement building as the main hurdle to peace in the Middle East

Such criticism does not make your organisation popular with Israeli government officials and the military. Only recently B′Tselem was criticised for allegedly leading a smear campaign against the Israeli Defence Forces (IDF). High-ranking generals claimed your work was ″unprofessional and extremely biased″.

Michaeli: That was a reaction to one of our newest reports on Operation Protective Edge, a military operation that was conducted by the IDF in the Gaza Strip in summer 2014. Against this background, the harsh criticism does not come as a surprise. The results of our research provided evidence of the blatant incapacity of our government and our military forces. We found that the IDF killed 2,000 Palestinians during the operation. Sixty-three percent of the victims, around 1400 people, were civilians – among those were 500 children.

Operation Protective Edge was initially executed in response to militant groups like Hamas increasingly targeting Israel with rocket fire. Does that circumstance not matter to you?

Michaeli: B′Tselem is not denying that Israeli military operations are often in response to Palestinian attacks. Still, we are an organisation that investigates human rights violations committed in the Israeli-occupied territories – it does not help us to compare those two sets of crimes, because it does not justify either of them. The IDF, for example, argues that it only destroys homes which provide shelter to militant groups. But without an imminent threat such bombardment can hardly be justified and constitutes a violation of the Geneva Conventions. Even if there were an imminent threat, one would still have to consider whether such military strikes on civilian targets would be appropriate. In one instance, known as ″Black Friday″, the IDF killed around 150 civilians within 24 hours in Rafah, the southernmost city in the Gaza Strip. That should give us cause for concern.

So far, B′Tselem has reported such violations to the Chief Military Advocate General of the Israel Defence Forces, Sharon Afek. Now you have stopped working together. Why?

Michaeli: We simply concluded that our co-operation with Afek′s office was pointless. I will give you an example: Some years ago, we protested against administrative detention, the practice of prosecuting and arresting Palestinians without a trial. Due to our resistance the number of inmates temporarily went down. Later, it skyrocketed again and today there are 700 Palestinians in administrative detention. Our efforts simply vanished into thin air. The same holds true for our criticism of Operation Protective Edge. To this day only one lawsuit has been successfully brought before a jury: Three soldiers were found guilty of looting in Gaza while fighting took place. Regarding the events in Rafah, no steps have been taken to initiate a legal procedure.

Michaeli: The reason for the inaction of the Advocate General is simple: he would have to prosecute himself, because his office is involved in approving military operations in the first place. The current system is built upon the rather naive premise that those people co-ordinating the occupation of the Palestinian territories and affirming the military strategies are willing to bring themselves to justice. Moreover, we now have a minister of defence, Avigdor Lieberman, who is – diplomatically speaking – not known for responsible behavior. Every hour spent on fighting for justice within the current system is a wasted hour.

How will you continue your work then?

Michaeli: We will pool our resources and start making our reports available to a larger audience in the future. Instead of handing our information to the office of the Advocate General, we will upload them and make them available for everyone. At the same time, we are still hoping that the government and the military will begin to investigate potential human rights violations themselves. Currently, Chief Prosecutor of the International Criminal Court (ICC), Fatou Bensouda, is investigating whether the ICC will take action regarding the situation in the Israeli-occupied territories. This might add to the pressure on Israeli officials. I do not think that it will have much of a transformative effect. Especially since the international community, though more vocal in criticising Israel over the past years, has not taken any action to follow up on that criticism.

Do you still believe in a peaceful solution of the Israeli-Palestinian conflict, or at least a partial success in your fight against human rights violations?

Michaeli: I would love to answer that question optimistically. Instead I will tell you about three incidents that took place during the last couple of weeks. In the Palestinian city of Nablus, IDF soldiers burned down a woodshed and caused damage amounting to 40,000 Euros. In Hebron a group of Israeli soldiers threw a tear gas grenade into a changing room of a Palestinian football team out of boredom. And only recently video footage emerged of a group of Palestinian pedestrians being attacked with a stun grenade from an IDF jeep. All of these incidents are indicative of the zeitgeist.  This atmosphere is the result of an ongoing brutalisation within Israeli society and increasingly reckless policies, which do not in any way suggest that an end to the conflict is within reach.

Asmaa al-Atawna's debut novel "Missing Picture" has been published in German translation (Keine Luft zum Atmen – Mein Weg in die Freiheit). In it, she describes life in Gaza from ... END_OF_DOCUMENT_TOKEN_TO_BE_REPLACED

At the end of every year, the team at Qantara.de gives you a run-down of the ten most-read articles on the site over the past 12 months. Here is a quick overview of the stories ... END_OF_DOCUMENT_TOKEN_TO_BE_REPLACED

Palestinian Christians are an integral part of the Palestinian national movement. This is the conclusion reached by the Chilean-born Palestinian political scientist Xavier Abu Eid ... END_OF_DOCUMENT_TOKEN_TO_BE_REPLACED

Jesus – Issa in Arabic – doesn’t merely enjoy the highest place among the prophets in the Koran. He is also revered in Islam’s mystical tradition for his message of love and mercy ... END_OF_DOCUMENT_TOKEN_TO_BE_REPLACED

With reported hostilities against Israeli journalists and the flag of the Palestinian territories flying on the streets and in the stadiums, it is clear the World Cup in Qatar is ... END_OF_DOCUMENT_TOKEN_TO_BE_REPLACED
Author:
Kai Schnier
Date:
Mail:
Send via mail

END_OF_DOCUMENT_TOKEN_TO_BE_REPLACED
Social media
and networks
Subscribe to our
newsletter