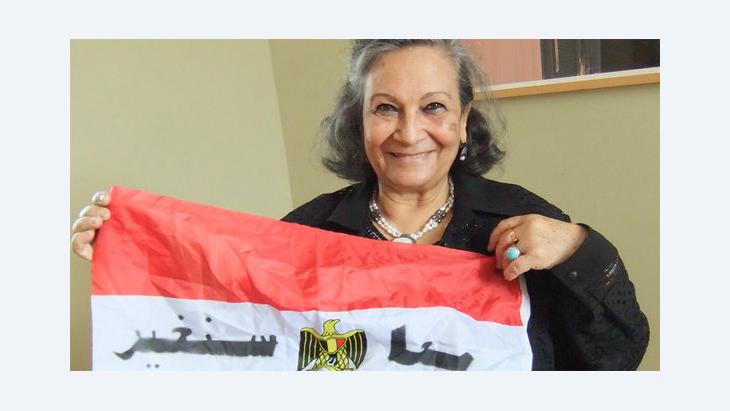 ''The Revolutionary Forces Should Close Ranks''

﻿Shahenda Maklad has been fighting for social justice in Egypt for decades. The left-wing political activist, who became known country-wide in the 1960s for championing the cause of peasants, has supported the Tahrir revolution of 2011 from the very beginning. In this interview with Christoph Dreyer, she calls on her fellow revolutionaries to unify and not to lose sight of their strategic goals

You were 13 years old when Gamal Abdel Nasser and his Free Officers Movement overthrew King Farouq in 1952. What are the differences between that Egyptian revolution and the events of the past year-and-a-half?

The difference is in the quality: the revolution in 1952 seized power. That enabled it to bring about change in society, in the economy and in all kinds of sectors. The revolution of 25 January, on the other hand, still hasn't taken over power. This is why we are now witnessing a fierce political, economic and social struggle for the consolidation of the revolution.

Would you consider it a problem that – because it was driven by the people – the current revolution has neither a leadership nor a clear programme?

Maklad: Of course, and this is also the reason for the chaos we are still experiencing. Although some consider the very fact that it didn't have a leader to be a merit of this revolution. Their argument is that had there been leaders, they would have been arrested immediately, which would have choked the revolution. Reality will show which argument is right.

Which one of these positions do you subscribe to?

In your recently published autobiography you state that a revolution is always just the beginning of the new and never its end. How far would you say "the new" has come since the revolution of 2011?

Maklad: It has torn down the crucial obstacle that stands in the way of revolution, which is fear. Fear of the apparatus of state, fear of the security forces, fear of retaliation against the people. This fear was torn down, and the door to future prospects was thrown open. 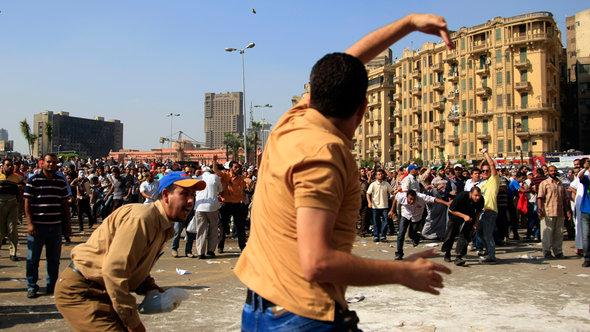 Demonstrations on Tahrir Square are not a thing of the past: last week, supporters and opponents of the Egyptian president clashed on Tahrir Square; stones and Molotiv cocktails were thrown, and dozens were injured

As a child of a politically active family, you learned quite early on in life the distinction between strategic goals and tactical manoeuvres. Where are tactical manoeuvres needed in today's political situation? And is this differentiation something the young revolutionaries still have to learn?

Maklad: Any tactic that does not lead in the direction of the strategy is wrong. And the strategy of the Egyptian people and the political forces right now is directed at assuming power. However, in my opinion, the established political forces in Egypt have now deviated from the basic strategy.

We had all agreed on a clear and consistent line, saying that we first need a constitution and a number of laws enabling us to assume power. But we have not stuck to this line. Instead, it was suddenly "elections first". Then the elections came, and the results were disastrous.

The fragmentation of the groups of Tahrir Square began when the Supreme Council of the Military Forces first held the referendum (on the amendment of the constitution, in March 2011 – ed.). For 18 days, we were one on Tahrir Square, joined in brotherliness and unity – all parts of society, regardless of political beliefs, ethnic or religious divisions. This was the true Egypt, and it will return. However, the youth and the political forces were drawn into a number of intrigues and schemes. But those have nothing to do with the strategy.

Tactically speaking, and from the point of view of a supporter of the revolution, what needs to be done now after the presidential elections?

Maklad: The revolutionary forces should close ranks and form a leadership.

Does that mean new demonstrations?

Maklad: No, not only that. The right to demonstrate is one of the rights we reclaimed. But demonstrations are just a weapon in the fight and not the fight itself. There are still demonstrations and sit-ins, and they will continue because so far, nothing of social justice around which everybody – including the liberal forces – had rallied has been achieved. We want to lead the movement of the Egyptian people and the revolution along the right path to completing the mission of the revolution.

Why are you so confident that the majority of Egyptians support the "progressive" aims you have always fought for?

Maklad: In the 53 years of my political life, I have been everywhere: in the villages, in the alleys, in the neighbourhoods. I know the people and I have confidence in them. 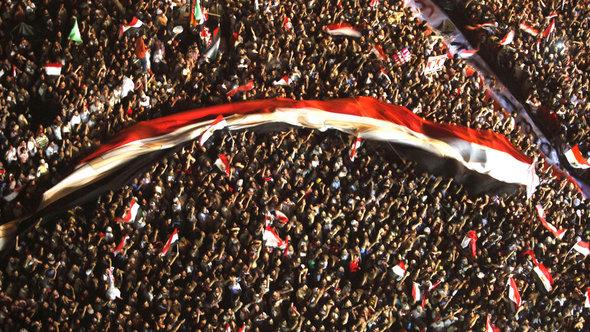 "For 18 days, we were one on Tahrir Square, joined in brotherliness and unity – all parts of society, regardless of political beliefs, ethnic or religious divisions. This was the true Egypt, and it will return," says Shahenda Maklad

You portray your life journey as part of Egypt's oppositional political culture. Why was this oppositional culture barely visible for such a long time?

Maklad: It is not as if I was the only oppositionist in Egypt. Many of my fellow oppositionists were arrested, spent time in jail and had to fight for their possessions and their income under persecution. I was in prison with 1,651 other political prisoners.

A key scene in your autobiography happened in June 2010, when you learned about the death of Khaled Said, the young blogger. Your reaction to this news was to say the very sentence you said when your husband died: "You didn't die for nothing; we will take revenge for you!" When did you understand that Khaled Said's death could mobilize a broad protest movement?

Maklad: Martyrs mobilize a revolution; they are fuel for the revolution. I knew right away that Khaled Said could have this effect; I participated in Mohamed El-Baradei's visit of condolence to Khaled Said's mother.

In another key quote in your book you say that you've never been willing to subordinate your personal happiness to a party manifesto...

Maklad: I am ready to sacrifice my personal happiness. I have sacrificed everything for the revolution, and little life has been left over, that's for sure. But I never wanted to be wedged into the brace of a party and preferred to stay outside of it. I want to be free and not constrained.

Would you recommend this attitude to today's revolutionaries as well?

Maklad: Yes, they must not let anyone constrain their thinking. The so-called democratic centralism – the trend of parties to centralize everything – kills people's initiative. This is why the young generation broke free from this authority; that is what happened during the revolution of 25 January. But I hope now they find a common framework to work together in an organized manner. It must not end in chaos.

Shahenda Maklad was born in 1938 in the Nile Delta city of Shebin El Kom. The daughter of a police officer active in the liberal Wafd party, she was politicized early in her life. She gained country-wide prominence through her fight for the rights of peasants in the Nile Delta village of Kamshish, first at the side of her husband and then, after his assassination in 1966, on her own.

While she considered then-president Gamal Abdel Nasser an ally for her political aims, she was a strident opponent of his successor Anwar El Sadat, under whom she also served time in prison. Maklad is general secretary of the independent Egyptian Peasants Union, which was formed after the revolution of 2011.

Home
Print
Newsletter
More on this topic
Interview with the Coptic activist Emad Gad: ''Egypt is inexorably developing into a theocracy''Coming to Terms with the Mubarak Era in Egypt: It's about Reconciliation, Not PunishmentThe Egyptian President's Track Record Thus Far: Multiple Morsi
Related Topics
All Topics
Date:
Mail:
Send via mail