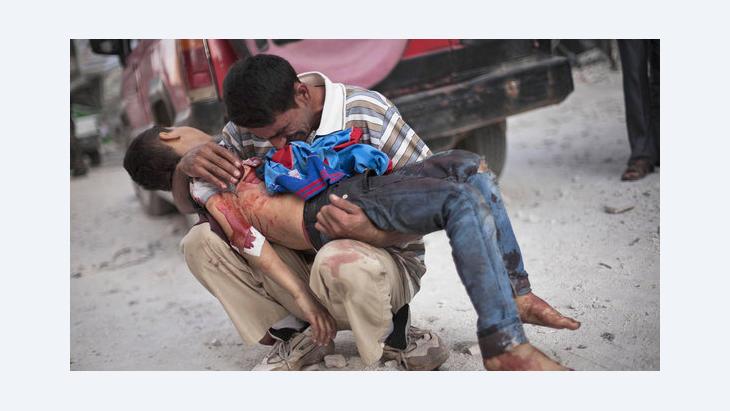 ''No Sovereign Government Has the Right to Oppress Its Own People''

In this interview with Samira Sammer, Sharif Nashashibi, co-founder and chairman of Arab Media Watch, discusses the difficulties of reporting on the Arab Spring in repressive states, the situation of minorities in Syria and the question of Western involvement in the Syrian civil war

Mr Nashashibi, what role did pan-Arab news channels like Al Jazeera and Al Arabiya play in the Arab Spring? Do you think they influenced the Arab uprisings?

Sharif Nashashibi: News coverage may influence foreign perceptions of the Arab Spring, but these revolutions have largely been influenced by events on the ground. Indeed, the media has generally found it very difficult to report these revolutions adequately.

The governments of Arab Spring states stopped journalists from getting into countries or, in those countries where journalists were already active, stopped them doing their work. That makes news coverage very difficult, and this has considerably raised the profile of citizen journalism and made social media such as Twitter and Facebook very important.

So would you say that social media has influenced news coverage of the Arab Spring?

Nashashibi: Social media played an incredibly important role because mainstream media were not able to do their job properly because of these restrictions and also because of the physical danger. Journalists became dependent on these information sources. But the problem with these sources is that it's hard to verify them. 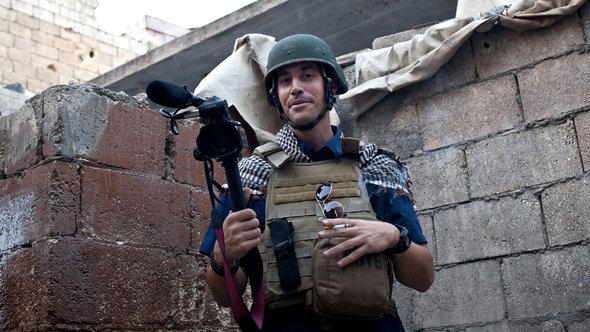 According to Sharif Nashashibi, it is extremely difficult for journalists to report from the countries of the Arab Spring. US journalist James Foley (pictured here) went missing in Aleppo, Syria, on 22 November 2012, while covering the civil war there. After a five-month investigation, his family now believe the Syrian government is holding him in a detention centre near Damascus

Governments shoot themselves in the foot with their press constraints because they are giving opposition movements the ability to use other channels that are much harder to control. Now we are watching – just like in any other conflict – a propaganda war between the government and the opposition; there is misinformation on both sides.

Some Western media say that Assad is the protector of Syrian minorities. Do you think that minorities like the Christians and Alawites would be in danger after Assad's overthrow?

Nashashibi: The rich history of co-existence between the various communities in Syria was not created by Bashar al-Assad or his father, but the regime has cynically played on sectarian fears to maintain its rule. My mother's family belongs to two of the country's numerous minorities: Christians and Armenians. I grew up on heart-warming stories of my mother being raised in a tolerant and secular society. She speaks with nostalgia of helping her Jewish neighbour in Aleppo during the Sabbath, and of her marriage to my late father – a Muslim – during which religion was never an issue between them or their families. This inclusive childhood predates the Assad dynasty.

In a post-Assad Syria, under no circumstances should minority rights be hindered. However, while it must be acknowledged that support for Assad is not limited to minorities, and opposition to him does not come solely from the Sunni Muslim majority, there are those who resent what they see as minorities' complicity or silence regarding his crackdown.

At the same time, one cannot ensure minority rights by repressing the majority (as has happened to Syria's Sunnis). So it is incumbent on the opposition to reassure the minorities, and incumbent on minorities to stand with their revolutionary compatriots. The rights of all should be considered, respected and treated as equal. 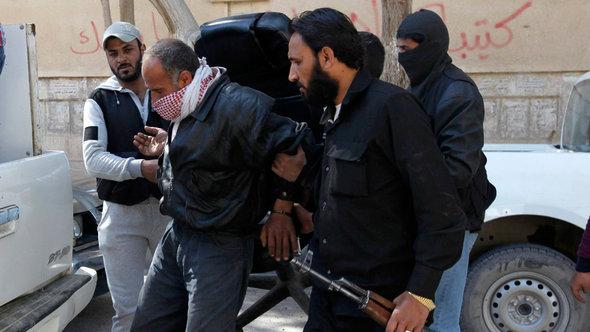 According to Sharif Nashashibi, although jihadist groups in Syria, which account for only a tiny minority of the population, are determined to impose their will on the majority, they enjoy little support among Syrians. This photo shows members of the Islamist Syrian rebel group Jabhat al-Nusra holding a detainee in the city of Raqqa, which the group now controls

The Western media is reporting the strengthening of the radical Islamic opposition, like Jabhat al-Nusra, who are assuming power in many places around Damascus. Do you think there is a real danger that these groups might assume power next in Syria?

Nashashibi: These jihadist groups are intent on imposing the draconian will of a tiny minority on the vast majority, but despite their military prowess, they have scant support among Syrians. Those who worry about al-Qaeda and its ilk dominating the country should bear in mind that wherever they have taken hold (Algeria, Iraq, Somalia, Mali, Yemen, to name just a few countries), they are quickly rejected by the local population because of their repressive, medieval rule.

For all their talk of Western disregard for human rights, they are no better at winning hearts and minds. With such a diverse society, there would be little support in Syria for such extremism, whether religious, sectarian or ethnic.

NATO ignored the Syrian opposition coalition's request for help and refuses to intervene in the conflict. The Syrian people don't want foreign involvement. Do you think it is right to stay out of this conflict? 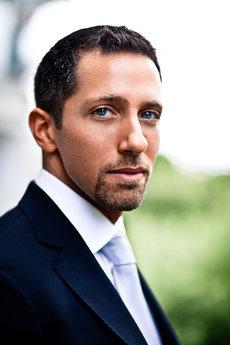 "It must be acknowledged that support for Assad is not limited to minorities, and opposition to him does not come solely from the Sunni Muslim majority," says Sharif Nashashibi

​​ Nashashibi: Assad's brutal reaction to the revolution made its militarisation inevitable: with the continued killings of peaceful protesters, calls for reform became demands for regime change, those who preferred a peaceful transition saw the need to defend themselves, and an insistence against foreign help turned into pleas for assistance.

The weaponry that Syrian revolutionaries possess – whether they got this weaponry from within the country or outside it – is light in nature; they don't have the tanks, heavy artillery and air power that Assad's army is using. Apart from the disparity in quality, there is also a quantitative difference. Assad regularly receives heavy weaponry from his allies (mainly Russia and Iran). Recent improvements in the rebels' military capability have not fundamentally changed this imbalance.

The arms embargo during the Bosnian civil war hurt the country's Muslims the most – the very people who bore the brunt of it – because the Russians were readily arming Bosnian Serbs, who could also rely on the Serbian army, as could Bosnian Croats on Croatia's. This enabled atrocities such as the massacre of more than 8,000 Muslims in Srebrenica at the hands of Bosnian Serbs. The same is true in Syria.

The argument by Assad apologists that he is entitled to receive foreign military support because his regime is a "sovereign government" is absolute nonsense. No sovereign government in the world has the right to oppress its own people, let alone receive arms from other countries to do so.

Sharif Nashashibi is co-founder and chairman of Arab Media Watch, an independent, non-profit watchdog set up in 2000 to strive for objective coverage of Arab issues in the British media. In 2008, he received the International Media Council's Breakaway Award, which is given to promising new journalists, "for both facilitating and producing consistently balanced reporting on the highly emotive and polarized arena that is the Middle East. He is a regular contributor to Al Arabiya English, The Middle East magazine and The Guardian, and a frequent interviewee on Arab affairs.

Home
Print
Newsletter
More on this topic
Criticism of the Media in the Case of Syria: The Perversion of the Media MachineMinorities in Syria: United against AssadThe Press in Syria: Independent Media as Enemies of the System
Related Topics
Arab Spring, Arabellion, Democracy and civil society, Human rights, Media in the Arab World, Syrian Civil War
All Topics

In Islamic mysticism, Ramadan is more than just a period of prescribed abstinence, signifying an opportunity for inner contemplation. Marian Brehmer explores the spiritual ... END_OF_DOCUMENT_TOKEN_TO_BE_REPLACED

Syria's president appears to have triumphed. He remains in power, the Syrian conflict is nearly over, and efforts are underway in the Arab world to normalise relations with his ... END_OF_DOCUMENT_TOKEN_TO_BE_REPLACED

The neo-Ottomanism propagated by Erdogan has long been more than rhetoric and symbolic politics. This can be seen from recent developments in parts of northern Syria, where Turkey ... END_OF_DOCUMENT_TOKEN_TO_BE_REPLACED

Surging coronavirus cases in many parts of the world have overshadowed the start of this year's Muslim holy month of Ramadan, with festivities once again curtailed by contagion ... END_OF_DOCUMENT_TOKEN_TO_BE_REPLACED

Researchers agree that climate change alone cannot be blamed for the outbreak of war in Syria in 2011. However, neither can it be ignored as a reason this once blossoming country ... END_OF_DOCUMENT_TOKEN_TO_BE_REPLACED

Syrian-born Rafik Schami is a gifted storyteller and one of the most successful authors writing in German today. In his 50 years in exile in Germany, he has introduced the Arab ... END_OF_DOCUMENT_TOKEN_TO_BE_REPLACED
Author:
Samira Sammer
Date:
Mail:
Send via mail

END_OF_DOCUMENT_TOKEN_TO_BE_REPLACED
Social media
and networks
Subscribe to our
newsletter