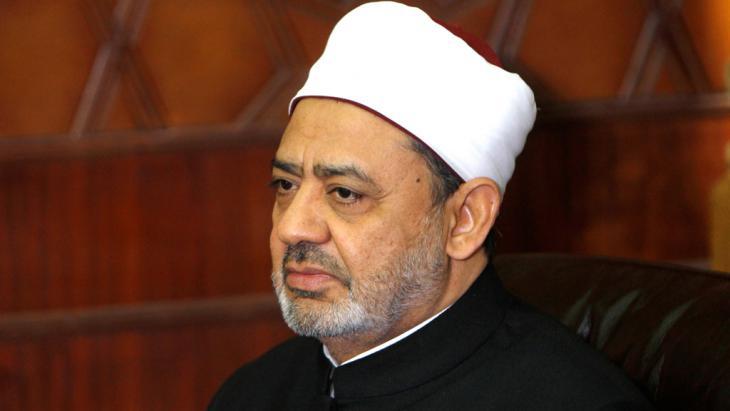 Interview with Sheikh Ahmed al-Tayeb, grand imam of al-Azhar University
"What the Islamist armed movements are doing is wrong"

Sheikh Ahmed al-Tayeb is grand imam of al-Azhar University in Cairo, one of the highest religious instances in Sunni Islam. In an interview with Khalid El Kaoutit, he explains how the jihadists of Islamic State (IS) are abusing Islamic doctrine for their own purposes

Al-Azhar is currently facing completely new challenges. The so-called "Islamic State" is building its empire in the Arab world on the basis of Islam. How is your institution dealing with this?

Ahmed al-Tayeb: In the name of God, the Most Gracious, the Most Merciful. Let us first agree on the term "Islamic State in Iraq and Syria" (ISIS). There is at present no "Islamic state" in that sense. Nor do I agree with your claim that ISIS has supposedly conquered the Arab world. That's precisely their propaganda! As an institution, al-Azhar teaches its students that Islam cannot prevail and spread by means of weapons, but through arguments, logic and conviction. What the Islamist armed movements are doing is wrong. Al-Azhar is not in agreement with it and disapproves of their activities.

What are the reasons for the emergence of these radical Islamist groups?

Al-Tayeb: Among other things, the crucial factors are the many setbacks experienced by young people, the economic backwardness, unemployment. That means that we need a vitalisation of the economy. The West has to take responsibility too and help the Arab countries to free themselves from the beast of terror. This could, for example, take the form of economic co-operation and political support. Western countries have to guarantee the Arab states a protective barrier, because if the terror remains here, it would be wrong to think that the West will be unaffected. We all know that people from the West have been voluntarily taking up arms on their own initiative to fight their own countries of origin and their fellow countrymen.

You mentioned economic factors as some of the reasons for the emergence of IS. But these militant groups all invoke Islam. So is it not necessary to change the image of Islam?

Al-Tayeb: No. It is necessary to present Islam the way it is, the way it respects others, the way it believes in others and grants them freedom of religion. It doesn't work the way some people are demanding: change your cultural heritage! Change the Koran! No, the Koran is unalterable, just like the Bible. 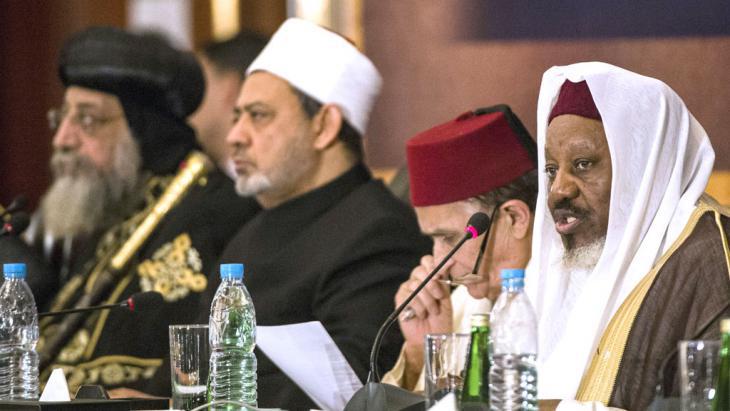 "They reject the Koran; their hearts are like stone, or even harder," said Sheikh Ahmed al-Tayeb, who categorically rejects the abuse of the Muslim faith by IS terror militias.

But even President Abdul Fattah al-Sisi has called for a new religious discourse. Does Islam need a fundamental renewal?

Al-Tayeb: Fundamental? No. That would mean altering the Koran and the foundations of the religion. The president said he doesn't mean a new interpretation of the scriptures; what he means is that we're facing new problems that have never existed in this form before and for which there is as yet no discourse. What we need is to find a new discourse that addresses these challenges.

And what steps is al-Azhar taking in this respect?

Al-Tayeb: Among other things, we're working on setting up a multilingual observation centre to monitor what ISIS and the other armed movements are spreading in the world. All this will be presented to a commission of al-Azhar scholars and then analysed by them. Recommendations will then be formulated, translated and published on the al-Azhar website.

Were movements like ISIS able to spread so quickly partly because the Arab states are not united?

Al-Tayeb: The Arab world has now understood and begun to unite. We're seeing that at the moment, for example, on the Yemen issue. What's happening there now will also happen in the fight against the Islamist armed movements.

The war in Yemen seems to be a war between Shia and Sunni Muslims. And you are saying that the Arab world has united? Against the Shia, because Iran supports the Houthis?

Al-Tayeb: No. This question is very dangerous. The Arabs have never pointed weapons at the Shia, only against the renegades who reject the legitimacy of the Yemeni state with armed force. And they are primarily Arabs, Yemenis. Yemen asked the Arab world for help and the Arab world came to the country's aid. But saying that the Arabs have united to turn arms against the Shia – that definitely has not happened.

Interview conducted by Khalid El Kaoutit.
© Deutsche Welle/Qantara.de 2015
Translated from the German by Katy Derbyshire
Ahmed al-Tayeb has been president of the respected Egyptian al-Azhar University since 2010. As such, he is also imam of the al-Azhar Mosque and an important religious authority in Sunni Islam.

Since President Abdul Fattah al-Sisi seized power in Egypt in 2013, he has ruled the country with an iron fist. Civil society, opposition and free press struggle to survive. Tens ... END_OF_DOCUMENT_TOKEN_TO_BE_REPLACED

The lack of grain supplies from Ukraine is forcing Egypt to act. Now even the Toshka project is being revived to grow grain in the desert. Birgit Svensson travelled to see it END_OF_DOCUMENT_TOKEN_TO_BE_REPLACED

In this unusually beautiful book of images and text, published in German and Arabic, artist Marianne Manda presents her own unique take on the megacity of Cairo. In over fifty ... END_OF_DOCUMENT_TOKEN_TO_BE_REPLACED

A stage, lights, a mesmerised audience: it looks like an Egyptian folkloric concert, but Umm Sameh is singing to heal the sick by driving out the demons that possess them END_OF_DOCUMENT_TOKEN_TO_BE_REPLACED

Comments for this article: "What the Islamist armed movements are doing is wrong"

I enjoyed reading this interview with Sheikh Ahmed al-Tayeb, the grand imam of al-Azhar University. Enlightened voices like him categorically rejecting the ideology of groups like IS would go a long way perhaps in dissuading the misguided youth from joining these groups. He has rightly stated that "Islam cannot prevail and spread by means of weapons, but through arguments, logic and conviction" and has stressed on the need for a "a new discourse" to address the emerging challenge of terrorism based on a false interpretation of scripture. However, I disagree with him slightly when he says that there cannot be a "new" interpretation of the scriptures. I see no reason why there cannot be an emphasis on the correct interpretation of scripture. A "new" interpretation does not mean altering the words of the Koran but only removing the misinterpretations that cloud their true and original meaning.

END_OF_DOCUMENT_TOKEN_TO_BE_REPLACED
Social media
and networks
Subscribe to our
newsletter