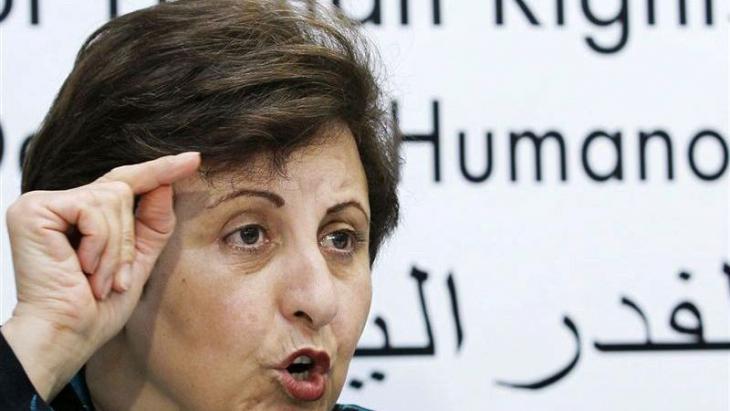 Following the recent nuclear agreement, Iranians are hoping not only for a boost to their country's economy, but also for improved rights. In this interview, Nobel Peace Prize laureate Shirin Ebadi explains why the time has come for the West to focus on the human rights situation in Iran. By Sharam Ahadi and Mitra Shodjaie

Opinions differ as to how the recent nuclear deal will impact on the human rights situation in Iran. What is your view?

Shirin Ebadi: I believe the human rights situation will improve. However, this will require that more information on this issue reaches the public, and that activists – both in and outside Iran – become more active. The lifting of sanctions will improve the economic situation of the people and hence give them more time to deal with issues such as human rights and political prisoners.

What part can the West and its media play in this regard?

Ebadi: If Western governments can talk about economic ties with Iran, then they can also address human rights issues. Every country has its own interests at heart, but governments also want to be popular and win votes. If we, as rights activists, succeed in sensitising and making the Western public aware of rights issues in Iran, then this can contribute to influencing their governments and putting the issue on the international agenda.

So you don't believe the nuclear deal will lead to a diminished interest by the West in human rights issues, or that the issue will become a victim of economic interests, as feared by some activists?

Ebadi: No. On the contrary, I believe the agreement will increase the sensitivity of the West for the rights situation in Iran and pave the wave for talks on the issue. As mentioned before, this will require an increased awareness and flow of information, but this is the task of rights activists operating in and outside Iran. 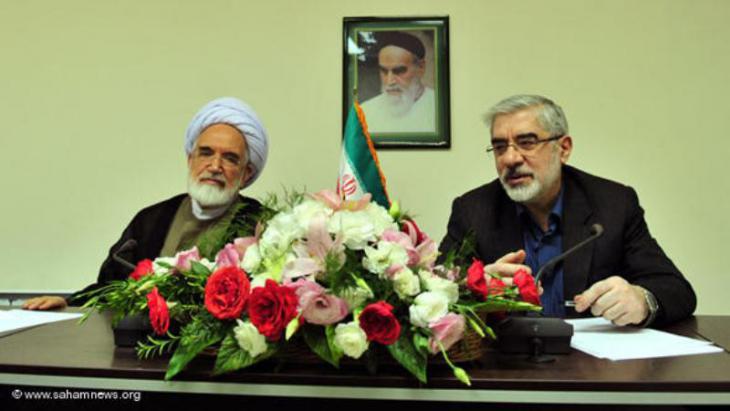 When Hassan Rouhani came to power in August 2013, several dissidents were released from prison. However, the president has not yet kept his promise to release all political prisoners: the leaders of the Green Movement, Mehdi Karroubi (pictured left) and Mir Hossein Moussavi (pictured right) are still under house arrest after four years

Are you saying the West has less to worry about following the nuclear agreement?

Ebadi: Until recently, the West was entirely focused on the nuclear issue. The dispute was about safety and the desire to prevent the development of nuclear weapons by Iran. Now that the issue has been settled, the West can now focus more openly on other issues.

Some argue that by ending the house arrest of Mehdi Karroubi and Mir Hossein Moussavi, the leaders of Iran's Green Movement, President Rouhani could set an example and fulfil his campaign promises. Do you think the nuclear deal could bring about their release?

I hope so. The streets were full of people celebrating the nuclear deal and chanting that now is the time for a "human rights deal". Now that the nuclear dispute has been settled, the West should focus on the human rights situation in Iran.

Dr Shirin Ebadi was born in Hamedan, Iran, in 1947. She studied law in Tehran and became a judge in 1969. She gained a doctorate in private law from the University of Tehran in 1971 and was the first woman president of the Tehran city court, a post she held from 1975 to 1979. She co-founded the children's rights organisation Society for Protecting the Rights of the Child (SPRC) in 1994. In 2002, Ebadi and other Iranian legal experts founded the Defenders of Human Rights Center (DHRC), which fought for the rights of minorities. In 2003, her courageous struggle for justice and human rights was honoured with the Nobel Peace Prize.

Iranian author Fariba Vafi is adept at describing everyday scenes and concealing within them something ambiguous, in parts strange and grotesque. She writes novels – which have ... END_OF_DOCUMENT_TOKEN_TO_BE_REPLACED

In her latest exhibition in Japan, Farzaneh Khademian depicts figures who seem detached from their surroundings. In interview with Qantara.de, the Iranian photographer and painter ... END_OF_DOCUMENT_TOKEN_TO_BE_REPLACED

The catastrophic human rights situation in Bahrain is being largely ignored by the rest of the world. Despite all the damning evidence, which includes a Human Rights Watch report ... END_OF_DOCUMENT_TOKEN_TO_BE_REPLACED

Talks to salvage the 2015 Iranian nuclear deal have entered their eighth round in Vienna. Even if a deal is struck and some of the sanctions are lifted, the state of the Iranian ... END_OF_DOCUMENT_TOKEN_TO_BE_REPLACED

Every year in December, the team at Qantara.de takes a look back at the articles that proved most popular with our readers. This year is no different. Here is a run-down of the ... END_OF_DOCUMENT_TOKEN_TO_BE_REPLACED

END_OF_DOCUMENT_TOKEN_TO_BE_REPLACED
Social media
and networks
Subscribe to our
newsletter