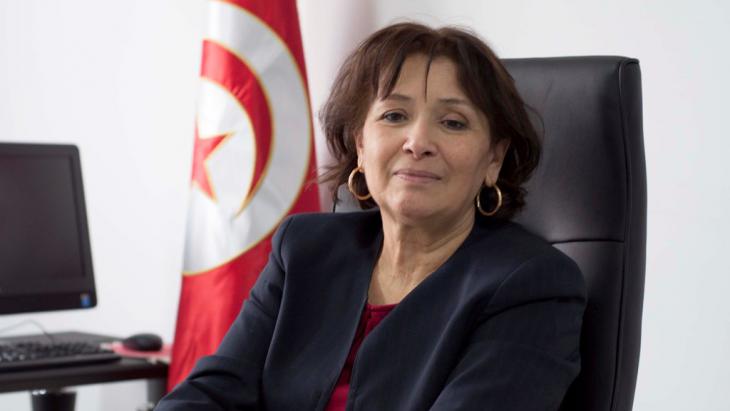 "We mustn't forget what happened!"

Tens of thousands of people who suffered at the hands of Ben Ali's dictatorship have made submissions for compensation to the Tunisian Truth and Dignity Commission. The first public hearings were held in mid November. Sarah Mersch spoke to Sihem Bensedrine, president of the commission

More than two years after the launch of the Truth and Dignity Commission, the first public hearings are now taking place. How significant are these hearings and why?

Sihem Bensedrine: So far, the Truth and Dignity Commission (TDC) has held more than 10,500 non-public hearings. These hearings give victims the time they need to relate what happened to them. The aim of these non-public hearings is to bring the truth to light. The purpose of the public hearings, on the other hand, is to reach the entire country, to tell people about the gross, systematic human rights abuses committed over six decades by a state that should have been protecting the rights and liberties of its citizens. The public hearings highlight the various forms that lawlessness can take, explain what despotic rule is like and demonstrate how the lives of citizens and their families were completely destroyed simply because they wanted to exercise a basic right. In so doing, these hearings also highlight the things that should never be allowed to happen again.

The victims are not driven by revenge. At the end, they all say: 'All this is in the past, but I want the people who have torn myself and my family to pieces to tell the truth. I want them to ask for my forgiveness and I want to forgive them.' This shows that Tunisia has made giant leaps forward.

Again and again, we are criticised for having waited five long years before addressing the past instead of starting immediately after the revolution. Some Tunisians still mourn the passing of the dictatorship. People yearn for more security and stability. Of course the dictatorship guaranteed these things to a certain extent, but at what cost?

So the hearings are, in a way, meant to immunise the people for the future?

Bensedrine: Exactly. The aim is to remind people how despicable this dictatorship was and to show that there is really no reason to romanticise it out of nostalgia. We confront people who have either forgotten those days or act as if they are suffering from amnesia with memories of what happened. We mustn't forget what happened; we must mourn. These public hearings have come at the right time. Once they are over, we can start something new. Memory loss is not the right way to deal with the past; we must keep the memories alive.

Only cases that have already been investigated and processed are considered for public hearings. Why did you choose to do things this way? Is this not akin to putting on a show?

Bensedrine: We are talking here about very serious cases, in other words non-public hearings that generally take up to three days. It would simply not be possible to deal with something like that in public. In the public hearings, victims generally focus on the emotional aspect, on how they suffered under the torture. We have to restrict the speaking time because what they have to say is very painful indeed. It goes without saying that victims receive counselling both before and after the hearings. 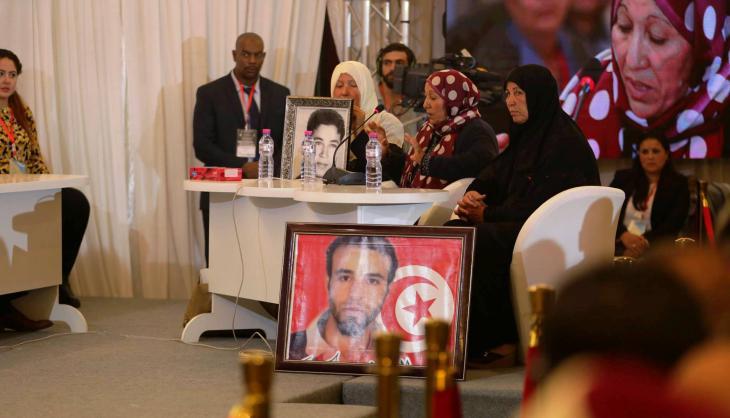 Throwing light on the past: the Truth and Dignity Commission (TDC) began its work at the end of 2013. Its focus is on crimes committed between 1955 and 2015 – from the end of colonial rule through the years of Ben Ali dictatorship to the Jasmine Revolution. The public IVD hearings are broadcast on national television

Over 60,000 cases were submitted to the TDC for processing. The incidents they relate to date from the period between 1955 and 2013. You are in this job for another 18 months. Is it really possible to complete this mammoth task in such a short space of time?

Bensedrine: It certainly is. Many people think that we only started working on 16 June, the closing date for the receipt of submissions. Naturally, this was not the case. We started sorting and processing the submissions long before that. We begin by registering and sorting the submissions. Then people are invited to a non-public hearing so that they can make a statement. All the information is fed into a database and the file is sent to the relevant research department. Each case is examined by legal experts. They search for archive material and evidence that backs up the victims' stories. They then invite witnesses and suspects to a confrontation, just like a judge would.

However, this is not like the normal judicial system, where one case is heard after another. In the case of this 'transitional justice', human rights violations are a central aspect, in other words the question as to the context in which a specific crime was committed. We examine the time factor separately. This is what makes it possible for us to process this huge amount of cases. We differentiate between a total of 18 historical events within which human rights abuses occurred. We have all the important information about these events.

We now have 100 hearing centres, each of which is staffed by a sociologist and a legal expert. Depending on the cases in question – in other words, as long as the cases are comparatively straightforward – these centres can hold between two and three hearings every day. Hearings for more difficult cases take at least a day. This means that we can handle an average 200–300 cases per day. We want to have finished all non-public hearings in the next eight months. This is feasible, but we have to be allowed to do our jobs. We are constantly being obstructed.

Bensedrine: I am referring here to the so-called 'deep state'. Our democratic state is just being born, but the old one is not yet fully dead; it's trying to drag us back into the past. Every time we come in contact with the representatives of this 'deep state' – and these people can be found in every state authority – it takes us a huge amount of time to access the information we need. We ultimately get what we need, but it's a struggle every single time. What's more, the people who are hired often work against us and try to impede our work.

Ever since the commission was founded, internal disputes have led to resignations and dismissals. Would your work not be easier if you had a full complement of staff?

Bensedrine: It is parliament's job to appoint new people to these posts. If any one body is not doing its job here, it's the parliament. We cannot appoint people on its behalf. We have a mandate for four years; for two-and-a-half of those years, we have been waiting on parliament. I have already written 15 letters and met the parliamentary speaker four times. He has been promising to take care of this matter since July 2015.

Are you saying that the political will isn't there?

Bensedrine: Although 'transitional justice' is anchored in the constitution, the politicians continue to drag their feet.

What day-to-day challenges do you face?

Bensedrine: While we do have access to many state authorities, which allows us to make progress, we still don't have access to the archive in the Ministry of the Interior. The good news is that the Tunisian administration records everything and has a long tradition of archiving material. Three different versions of the one document can be found in three different places. We are constantly finding documents in places where they shouldn't be. So our work is not easy. But we are getting good results all the same.

In the cases that were presented recently, we not only have the evidence, we also have confessions from the perpetrators. Many of them have asked for forgiveness. And that is exactly what we want to achieve: to urge the perpetrators to admit that what they did was a crime. As soon as the will to forgive is there, the victims will be able to find peace too.

Home
Print
Newsletter
More on this topic
Planned ″business amnesty legislation″ in Tunisia: Tunisia: sweeping history under the carpet rather than confronting the past?Victims of the Tunisian Revolution: The slow and painful search for the truthEgypt's and Tunisia's state security files: An inaccessible past
Related Topics
Arab Spring, Arabellion, Human rights, Justice, Rule of law, Tunisian Revolution, Zine el-Abidine Ben Ali
All Topics

Tunisia has launched a successful transition to democracy, but difficult economic and social times lie ahead. According to political scientist Said AlDailami, Europe should focus ... END_OF_DOCUMENT_TOKEN_TO_BE_REPLACED

Mass protests began in Egypt on 25 January 2011. They triggered the overthrow of long-time ruler Mubarak. Ten years later, many human rights activists and journalists are in ... END_OF_DOCUMENT_TOKEN_TO_BE_REPLACED

Mass protests began in Egypt on 25 January 2011. They triggered the overthrow of long-time ruler Mubarak. Ten years later, many human rights activists and journalists are in ... END_OF_DOCUMENT_TOKEN_TO_BE_REPLACED

Recent unrest shouldn't come as a surprise to anyone who's followed Tunisia's trajectory. The image of the North African country as the only "survivor" of the uprisings in the ... END_OF_DOCUMENT_TOKEN_TO_BE_REPLACED

Ten years after the start of the Arabellion in North Africa and the Middle East, many view the movement as a failure. But rather than being over, it has now entered a more mature ... END_OF_DOCUMENT_TOKEN_TO_BE_REPLACED

M’hamed Oualdi presents the story of a manumitted-slave-turned-dignitary in the Ottoman province of Tunis and the posthumous conflicts over his estate as a case study to ... END_OF_DOCUMENT_TOKEN_TO_BE_REPLACED
Author:
Sarah Mersch
Date:
Mail:
Send via mail

END_OF_DOCUMENT_TOKEN_TO_BE_REPLACED
Social media
and networks
Subscribe to our
newsletter