Soheib Bencheikh is the Grand Mufti of Marseille, France. In this interview, Bencheikh argues in favour of the headscarf ban and says that, because of secularism, Islam enjoys equal rights and duties in a traditionally catholic environment

​​To know how the Muslim community adjusts in a state upholding secularist values like France, Liberal Islam Network (JIL) interviewed Soheib Bencheikh, Grand Mufti of Marseille France, who visited Jakarta to talk about "Islam’s contribution in structuring the plural world" in an international seminar held by Francophonie, Switzerland Embassy and International Centre for Islam and Pluralism (ICIP). Do the Muslims in France, particularly in Marseille, need a mufti? Soheib Bencheikh: Firstly, I assert that Islam does not recognize the clerical system. However, imam and mufti are not clerics but guardians and mentors who attempt to give light to the believers, without forcing and judging them. France attempts to pay attention to and organize the Muslim society, since Islam is the second major religion in the country. In this context, in 1995 I was installed as a mufti in Marseille after completing my study at the Sorbonne University. France is a secular country who strictly endorses the laïcité rule. Do Muslims have any trouble living in such a country? Bencheikh: Outside of France, particularly in Muslim countries, secularism is perceived as infidelity and atheism. Hence, they consider Islam to have no future in France. Yet, without secularism that is no administrative neutrality ("hiyâdatul idârah") to regulate a country, we will be overwhelmed. Secularism is not anti-religion, but also not for religion. So, you define secularism as administrative neutrality? Bencheikh: It is a constitutional interpretation for laïcité inYour Opinion Do you think that secularism poses a threat to Islam? Please write to us!

France. I have to emphasize that due to secularism, Islam can stand equally with Catholics in rights and duties. Besides, we have no other way to regulate a national life except through democracy or majority rule. Our dilemma is that currently Muslims appear dangerous. People are afraid of Islam due to a few people’s attitude of terror in the name of Islam. Fortunately, due to secularism and human rights, Muslims can be relieved. Many Muslims have a negative image about secularism. Could you imagine that there will be harmonization between Islam and secularism? Bencheikh: If secularism is interpreted as state neutrality to regulate a country, it will not be a problem for Muslims. On the contrary, the separation between religion and politics will clarify Islam as a divine spiritual doctrine, not as an instrument which (can) be misused to gain the power. Moreover, due to that, Islam can return its original formulation, meaning it will return as the promoted teaching ("yu’radl") not as a forced teaching ("yufradl") – as the Koran affirms – "Anyone who will believe may believe, and anyone who will be an infidel may be an infidel!" You said that secularism could return the original formula of Islam in regulating political power. Is the original formulation of Islam closer to secularism? Bencheikh: We have to realize that most of Islamic schools in "fikh" (Islamic jurisprudence), "tafseer" (Koran interpretation) or theology, developed outside of political rule. Muslims – as we read through history – were free to determine any schools they wanted in the beginning. Assimilation between religion and politics in Islam is a new phenomenon – which to me is hazardous for Islam, mainly when it is utilized as instrument to gain the ruling position by parties, or when it is utilized to legitimate the power of a regime. You said that assimilation between Islam and politics is a new phenomenon. Since when? Bencheikh: It started from the first half of the twentieth century, when political parties based on religion were established to pursue political contestation to gain power. In this context, we can mention the emergence of "Ikhwan al-Muslimin" (Muslim Brethren) in Egypt as an example. Is it due to the contribution of Islamic ideologists such as the views of Muslim Brethren figures, especially Sayyed Qutb? Bencheikh: Sayyed Quthb went too far when he conveyed his radical notions in his book, "Ma’âlim fi-t-Tarîq", particularly in terms of his views of twentieth century "jahiliyah" (ignorance), God’s judgment, and the ruler’s infidelity. Do Muslims in France feel that assimilation with the French culture will threaten their Islamic identity? Bencheikh: When we read through history, we will find that Islam always interacts with many cultures. In addition, secularism implemented in France is a form of neutrality. It is pure neutrality. We can interact with the French culture that has a background of Catholicism, while holding on to our own spirituality and Islamic values. Are those values threatened by French secularism? Bencheikh: Not at all. It is a challenge we must respond to. Can Islam survive without political rule defending it like in Muslim countries? If Islam is perceived as a satisfying religion, the rising light, it will never need power to force people if it is superior. It will survive as values, norms and ideals of life, and should not be forced upon others. However, the demonstration against the ban of religious attire in French public schools confirms that there were problems between Islamic identity and the equality principle of laïcité. Bencheikh: On the contrary, the demonstration on the ban of religious attire indicates that French people are autonomous and free. Moreover, the demonstrators are a minority of Muslims in France. Most Muslims in France agree with the decision, since they observe that extremity is a threat to their future in France. The ruling attempts to hide religious symbols in public schools. Actually, the Catholic majority has more right to strike than Muslims, since they are also affected by the ban. Nevertheless, they have not. You have written a book called Marianne and Prophet: Islam within laïcité. What is it about? Bencheikh: It is a study of law and philosophy so that Islam can find its place in this new climate, and so that it can get the answers that can never be found within our classical literatures. Like what? Bencheikh: Muslims find themselves a minority in a neutral country that is not a Catholic country since it is secular and has no religion at all. With the minority status, it is impossible to endorse "fikh" (Islamic jurisprudence). Hence, we have to find a new "fikh" or notions about "fikh" that are compatible with our condition as the minority within a neutral country. These all are new to Islamic literatures. That is my endeavour in the book. Interview conducted by Novriantoni, Liberal Islam Network, 04/2004

Award-winning poet Dincer Gucyeter’s debut novel is a tour de force through the German reality he experienced as an artist and son of Turkish immigrants, written with an unsparing ... END_OF_DOCUMENT_TOKEN_TO_BE_REPLACED

Canan Topcu came from Turkey to Germany as a child. In her essay, she describes how bothered she was by the racism she encountered in her country of origin when she travelled ... END_OF_DOCUMENT_TOKEN_TO_BE_REPLACED

Much has changed in the European post-fascist firmament since former SS officers, veterans of the collaborationist Vichy government and other dubious figures established the ... END_OF_DOCUMENT_TOKEN_TO_BE_REPLACED

When she ascended the throne, millions of Muslims still lived under British rule. Later, Elizabeth II appealed for tolerance in a multi-religious society. She was the first ... END_OF_DOCUMENT_TOKEN_TO_BE_REPLACED 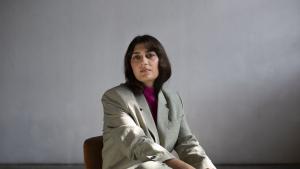 "You don't have to be Huseyin or Emine to understand"

Columnist and editor Fatma Aydemir is one of the most scintillating voices in new German literature. In her latest novel, "Djinns", she tells a migrant family story from six ... END_OF_DOCUMENT_TOKEN_TO_BE_REPLACED
Date:
Mail:
Send via mail

END_OF_DOCUMENT_TOKEN_TO_BE_REPLACED
Social media
and networks
Subscribe to our
newsletter