Before the revolution, did you feel independent theatre was reaching an audience?

Kadour: Generally speaking, the cultural scene in Damascus wasn′t that rich. We had three or four theatres and that was it, with shows playing for maybe one or two weeks, a maximum of three. There were very few of us theatre-makers and other cultural actors. And the audience by default was also small. You used to see the same faces, as if we were just one group taking the same bus, moving from one theatre to another. In 2008, however, Damascus was chosen to be the Arab Capital of Culture and it was a national event.

There were huge funds for that year and a committee was established to organise it: they didn′t rely on the Ministry of Culture. We worked with them and were able to get funding. The regime wanted to show the whole world that we had culture, art, a vibrant scene. Suddenly, in 2008, we had hundreds of concerts, exhibitions, theatre performances, film screenings... It was a little fake and after that, everything was gone. There wasn′t any kind of sustainability.

What was people′s reaction to the rise of new plays?

Kadour:  People observed us, sometimes attacked us. Now I look back and think: maybe it was an indicator of deep changes in a society. It′s not a coincidence that ten years before the revolution, we started writing. When we decided to write new plays about Syria, here and now, we were the result of a long social and political process, but we didn′t realise it at the time.

Were you surprised when the revolution started? 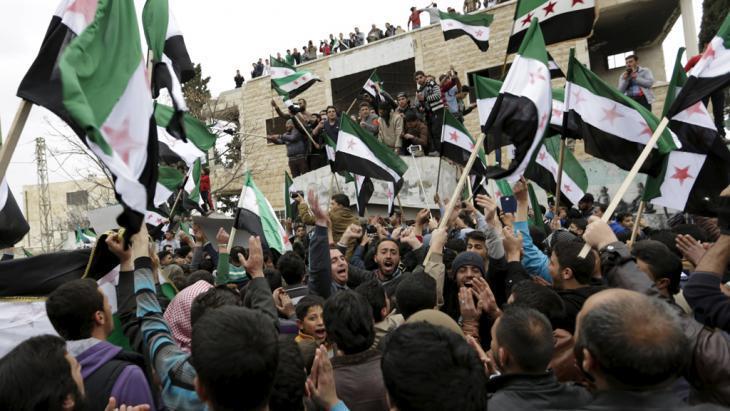 A rallying cry against the Assad regime: "I can say that everyone was surprised by the uprising, but at the same time, it was accepted that we needed a revolution. When we started the revolution, we were just peaceful protesters in the street; now we still have a dictatorship and so many groups of extremists,″ says Kadour

Kadour: I can say that everyone was surprised, but at the same time, it was accepted that we needed a revolution. We were not a secular country, as Bashar and his father used to say. Sure, our president had studied in the UK, shaved his beard, spoke languages, but at the same time, the regime didn′t build any theatres. They just allowed people to build more and more mosques. They let ignorance happen, with a very poor education system.

After the revolution, Bashar tried to convince the world that he fought terrorism. People in Europe are afraid of Daesh now and so am I, but we can′t forget that everything was done gradually, over many years, to turn Syria into an incubator for Islamists, extremists, ignorant people. When we started the revolution, we were just peaceful protesters in the street; now we still have a dictatorship and so many groups of extremists.

With "Assad or We Burn the Country", Sam Dagher has furnished the world with some genuine ammunition against the Syrian regime's on-going campaign of disinformation. The only ... END_OF_DOCUMENT_TOKEN_TO_BE_REPLACED

Islamist attacks such as those that took place in Paris this last autumn evidence a new kind of perpetrator. In place of individual terror organisations, networks appear to have ... END_OF_DOCUMENT_TOKEN_TO_BE_REPLACED

Decades of oil exports have completely destabilised culture and politics in the Middle East. Speaking with Lena Bopp, the renowned writer Amin Maalouf says that the distorted ... END_OF_DOCUMENT_TOKEN_TO_BE_REPLACED

France is locked in a row over Islam, Islamophobia and the headscarf. But one key voice is almost completely missing from the debate – that of the women who wear the veil. By ... END_OF_DOCUMENT_TOKEN_TO_BE_REPLACED

The EU's relationship with the Moroccan government reinforces the political status quo at a time when a growing number of Moroccans appear to want change. By Chloe Teevan END_OF_DOCUMENT_TOKEN_TO_BE_REPLACED
Author:
Laura Cappelle
Date:
Mail:
Send via mail