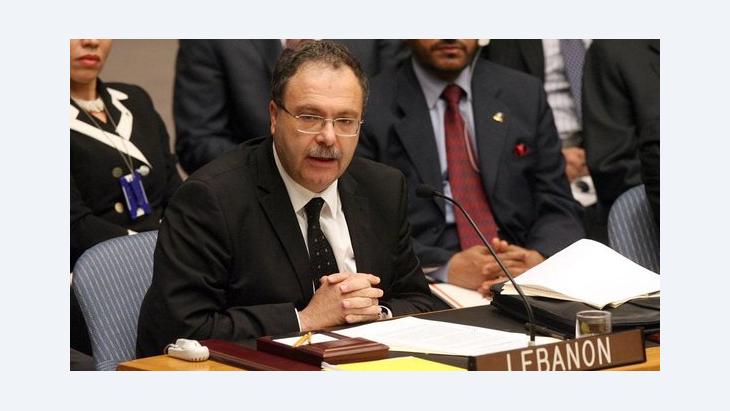 Interview with Tarek Mitri
The Fruits of Pent-Up Fear

The Lebanese Christian politician and university lecturer Tarek Mitri is critical of the withdrawal of many Arab Christians from the societies in which they live. In this interview with Mona Naggar he calls for a revival of "Arab Renaissance" ideals

The Arab world is experiencing fundamental political upheaval. Many Arab Christians say they are very worried and have reservations about the revolutions going on in various countries. Why this concern?

Tarek Mitri: This concern is understandable and it is nothing new, in fact it has been continually increasing over the past few years. There are many reasons for this: the decline in the number of Christians in the Middle East, emigration, developments in Iraq, a reduction in the political influence of Christians in Lebanon that can't be attributed solely to population decline, as well as emigration from Palestine. There are less than 10,000 Christians living in Jerusalem today. This development has many causes, and many people bear the responsibility.

And now this unexpected change is occurring in the Arab world. Revolutions are breaking out; the people are demanding freedom, democracy and dignity. In view of their history and their role in the Nahda, the "Arab Renaissance", one might have expected the Christians to throw their weight behind these movements. Some Christians have come out in support; others remain reserved and some are even staunchly opposed to the revolutions.

The Assad regime is scaremongering, making Christians afraid of their Muslim compatriots

The reasons for the reserved approach are the pent-up fears and worries that have sown fundamental doubts about anything that happens in the Arab world. There's a deep distrust of any potential for progress, resignation in the face of perpetual regression in the Arab world, and there's something I call "premature disappointment".

This applies to Egypt, for example, after it turned out that the Islamist movements are capable of capturing the majority of Egyptian votes and will now govern the country. Of course, fears are also stoked by the threat of civil war in Syria.

But is it not also the case that this fear is being consciously exploited?

Mitri: Yes, that is happening. I am concerned that Christians have become the victims of systematic, considered, politicized scaremongering at the hands of the regime, particularly in Syria. The Assad regime is frightening the Christians, then calming them again. It makes them afraid of their Muslim compatriots, and tries to convince them that this is an Islamic revolution. Then it reassures them that the regime will protect them.

Arab Christians played a key role in the twentieth century. This role was motivated by universal values. These values were shared by Christians and Muslims, values that did not put the Christian minority in confrontation with the Muslim majority. Christians represented national or socialist idea; they fought for human rights and women's rights. Churches and social institutions served society as a whole, regardless of peoples' religious affiliation. This was all driven by a vision that aimed to promote progress in society as a whole.

When did this vision cease?

Mitri: I call it withdrawal, regression, giving up their historical role. It began at the end of the nineteenth century and lasted throughout the entire twentieth century. The rise of Islamist movements led to their language dominating political and social life. 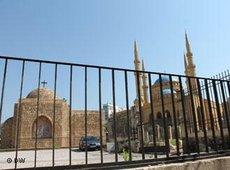 Side by side and yet separated by so much: mosques in the Arab world are starting to serve the function of rallying points for demonstrations, which makes it difficult for Christians to take part

​​Nevertheless, radical Islamist movements have always had more problems with other Muslims than with Christians. The failure of the modern Arab states is a turning point. Muslims and Christians share this feeling, this sense of the most profound failure.

Since the start of the Syrian revolution, some Syrian and Lebanese Church representatives have been expressing their loyalty and support for Bashar al-Assad. How should these statements be interpreted?

Mitri: There are clerics who have become hostages of the regime's systematic scaremongering. The existential fear, fears for the basic survival of the minority, renders everything else insignificant, even moral responsibility. No cleric – whether he be Christian, Muslim or a follower of another religion – can break away from his moral obligations.

If a crime against humanity is committed, then he has to recognise it as such and condemn it. These statements are issued by clerics with loud voices that are heard here and in the West, but they do not represent the views of all Arab Christians. One must not generalise. I know many Church representatives who do not agree with these statements.

What do you expect from Arab Christians?

Mitri: The situation is in flux. Copts took part in the Egyptian revolution. Church leaders were afraid and urged caution, but they didn't heed the warnings. But one also needs a solid framework for participation in political upheaval. That means, if a Syrian Christian is against the regime, then it would be out of a question for him to go to the Khalid ibn al-Walid mosque in Homs and demonstrate there on a Friday. That's no place for a Christian. The appropriate means for political expression are lacking.

The dictators have destroyed forums of political activity, where people of various political affiliations can come together. There are no traditional places for gatherings or demonstrations. And if the mosques start to serve this function, then Christians with the same political views as Muslims feel excluded. In our countries there are now fewer places with a multi-faith population. 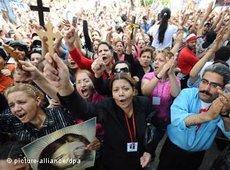 Although Coptic Christians protested alongside Muslims during the Egyptian revolution, things turned ugly in May 2011 when clashes between Muslims and Christians left 13 people dead, leading to tension between the religious communities

​​The Ottoman era "Christian quarter" no longer exists, the population has become mixed. But over the last few years, in Lebanon as well as in Syria and Egypt, I've observed that Christians are living alongside other Christians, that they send their children to Christian schools, that they work in companies managed by Christians. We're seeing a drastic increase in this kind of societal problem during this period of change.

You mentioned the Nahda, the "Arab Renaissance", in which Christians played a key role. What are the chances of resurrecting this project?

Mitri: I wasn't talking about the Nahda project itself, but the values that formed the essential basis of this renaissance. The project had both nationalist and modernist characteristics. The Arab nationalism project has failed, and the modernist project is in crisis. Restarting the Nahda would not be easy.

But the active participation of Christians in the "Arab Renaissance" was based on universal values, on justice, equality, the liberation of women, the freedom of art and science – all things that benefit society as a whole. The Christians assigned greater significance to the universal rather than the individual.

Allow me to speak openly.

The Christians experienced the Ottoman millet system, which gave them rights but also restricted them. It was like a clamp that was broken open with the fall of the Ottoman Empire and the emergence of today's nation states.

The Christians were convinced that the break with the old system would only be complete if they establish a homeland founded on a common identity, one that unites members of the majority and the minorities. They wanted to break free of the geographical concept of the "Christian quarter" that is now called "minority". The Christians tried to leave the confines of the minorities' snail shell.

Many are aware that this is the only choice open to them in future, even if it appears to be difficult right now. But what would the alternatives be? Emigration or isolation?

Al-Azhar University in Cairo, the highest Sunni Muslim institution, recently published a bill of rights on basic liberties in conjunction with several other intellectuals. How do you rate this document?

Mitri: It is important to note that in recent years, Al-Azhar University served the interests of those in power. Now it is trying to regain its independence. It is also important to know that in Egypt, radical Islamists and some representatives of the Muslim Brotherhood do not particularly care for the basic rights anchored in this document, such as religious freedom.

This also includes the right not to follow any religion, and freedom of the arts and sciences.There are those in Egypt who call for books to be burned, and cinema and theatre to be banned.

The document counters these currents. It is courageous and represents genuine reform. To date, there has not been a single Islamic document that stands up so vehemently for civil liberties, although it ties them in with Koranic principles and respect for Muslim sensibilities.

Home
Print
Newsletter
More on this topic
Relations between Christians and Muslims in Egypt: Civil Society Instead of ConfessionalismSyria: The Opposition and the Church: A Slap in the Face for the Pro-Democracy MovementEgypt's Christian Minority: Copts Fear for the FutureChristians in Aleppo: Rumblings beneath the Surface
Related Topics
Arab Spring, Arabellion, Christians in the Islamic world, Democracy and civil society, Human rights
All Topics

Any reconciliation between Turkey and Syria’s Assad regime would have disastrous consequences for many Syrians, explains Syria expert Kristin Helberg END_OF_DOCUMENT_TOKEN_TO_BE_REPLACED

There are signs of an imminent normalisation of relations between Turkey and Syria. This would allow Erdogan to score political points domestically before the upcoming elections ... END_OF_DOCUMENT_TOKEN_TO_BE_REPLACED

As Syrian camps housing families of Islamic State fighters get more dangerous, there are calls to bring children out, even if the mothers don't want to go. The idea of separating ... END_OF_DOCUMENT_TOKEN_TO_BE_REPLACED

Where are the measures to deal with the looming challenges facing the Arab world? In this commentary, Marwan Muasher warns that the region is in grave danger of falling behind ... END_OF_DOCUMENT_TOKEN_TO_BE_REPLACED

At the end of every year, the team at Qantara.de gives you a run-down of the ten most-read articles on the site over the past 12 months. Here is a quick overview of the stories ... END_OF_DOCUMENT_TOKEN_TO_BE_REPLACED

Social engagement is often motivated by religious factors. A new book explores the background to these community efforts and appraises how effective they are in helping to ... END_OF_DOCUMENT_TOKEN_TO_BE_REPLACED
Author:
Mona Naggar
Date:
Mail:
Send via mail

END_OF_DOCUMENT_TOKEN_TO_BE_REPLACED
Social media
and networks
Subscribe to our
newsletter