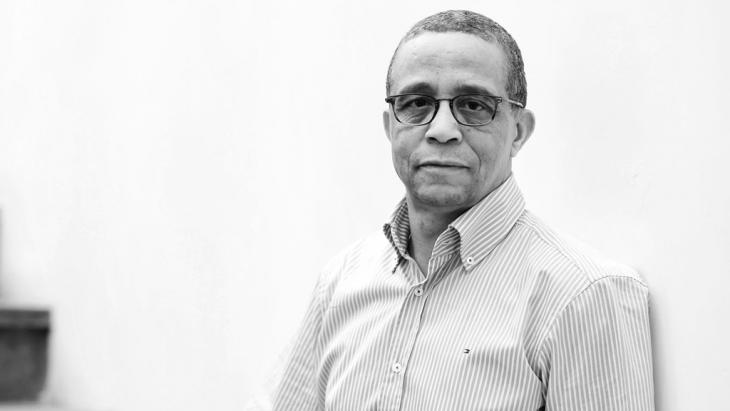 Now based in France, the Algerian writer Yasmina Khadra is one of his country's most successful authors. The film The Attack, based on Yasmina Khadra's book of the same name, was honoured as Best International Literary Adaptation at this year's Frankfurt Book Fair. Regina Keil-Sagawe joined the novelist for an espresso

"Quel étage?" asks the friendly brunette in the lift at the Algerian Cultural Centre on Rue de la Croix-Nivert. "Seventh floor," I answer. "Ah, quelle chance! Lucky you! That's where you're closest to heaven, and there's a fantastic view of Paris. I work on the second floor." She gives a shrug of regret and disappears into the library.

Up on the seventh floor, Yasmina Khadra alias Mohammed Moulessehoul is waiting for me – the Algerian writer who rose like a comet in the Parisian literary heavens in the 1990s. Ever since, his nom de plume has stood for thrilling, entertaining reads; for great, passionately committed literature that traces the conflict between the Arab world and the West with unashamed pathos and emotion. And which appeals worldwide for understanding between nations, for peace and tolerance in Algeria, Somalia, Afghanistan, in Israel, Palestine and Iraq.

Today, he seems exhausted. He has dark shadows underneath his eyes – a bestselling author and institute director with a full appointment book. He has just presented his latest novel in Spain and the Frankfurt Book Fair is just around the corner, where he is a guest of honour. Khadra grants me an audience for the length of an espresso.

Yasmina Khadra, you're one of the guests of honour at this year's Frankfurt Book Fair, taking part in the award ceremony for the best international literary adaptation, which is going to The Attack, filmed by the Lebanese director Ziad Doueiri and based on your novel set in Israel. What are your expectations of this award? Does it make amends for the fact that the film couldn't win anything at Cannes, because neither Lebanon nor any other Arab state would let it compete in its name – and Qatar, the movie's main financial backer, even offered large sums of money for its name to be removed from the credits…? 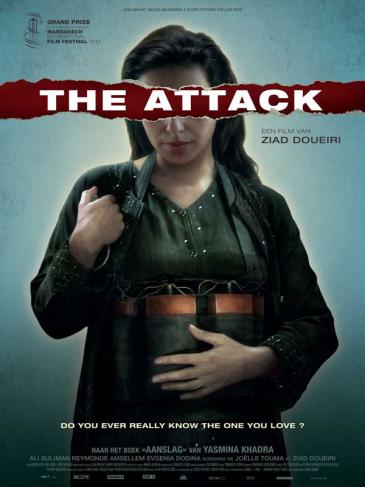 Award-winning film: "The Attack" was awarded the 10,000-euro prize at the Frankfurt Book Fair for Best International Literary Adaptation. The movie is based on Yasmina Khadra's novel of the same name

Yasmina Khadra: There is a life after defeat. The film wasn't shown in Cannes, but now it's getting an award in Germany – as it did in Marrakech, at the International Film Festival. That's the up and down of existence. There's no reason to love life any less, despite all the injustice, the resentment, the defamation.

I'm an uncomfortable writer, someone who disturbs people, who doesn't fit into the picture, but I can't help it. Some people have problems dealing with my atypical career path as a writer. Expectations? I don't have any. I do the things that are dear to my heart, and kindred spirits are welcome to join me. If my life in Paris has taught me one thing, then it's this: no crocodile has ever been tamed by someone drying its tears.

You came to fame with books tackling contemporary problems, such as most recently your novel set in Africa, L'Équation africaine ("the African equation"), which tells the story of a German doctor kidnapped by Somali pirates. In your latest novel Les Anges meurent de nos blessures ("the angels die of our wounds"), the story of a boxer with all its highs and lows, you revisit 1930s Algeria, however, as you did in What the Day Owes the Night, filmed by Alexandre Arcady in 2012. What do you find so fascinating about colonial-era Algeria? It's presumably not nostalgia that's motivating you to write about it?

Yasmina Khadra: Me and nostalgia? I wasn't even alive at the time. No, I love my country above all else. And I try to do justice to its history, its generosity of the heart, its survival instinct, and not to disappoint the enthusiastic expectations of my Algerian readers, great and small. Les Anges meurent de nos blessures is an answer to the silence covering up an entire era. An era of contradictions and paradoxes beyond measure, an era of inconceivable misunderstandings. My aim was to write a novel worthy of the greatness of the Algerians.

Your books have been published in 41 countries, and your latest novel came out in parallel in France and Spain (Los angeles mueren por nuestras heridas). How did that come about?

Yasmina Khadra: More of my books are translated in Spain than in any other country. All my books have come out in Spanish, some even in Catalan. (His eyes wander along the bookshelves, housing row upon row of his books in translation.) The Spanish media has always treated me well. No journalist has ever attempted to distort my image. The Spanish are professional critics, honourable, conscientious, unprejudiced and free from arrogance. 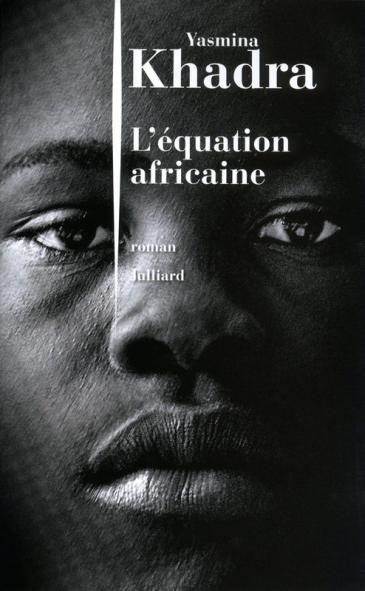 A sailing trip that turns into a life-threatening drama: in "The African Equation", Yasmina Khadra describes how two Germans are kidnapped by Somali pirates and become witnesses to a dark side of contemporary Africa

In a recent interview with a Spanish newspaper, you said you were thinking of leaving France to settle in Spain. But you've been the director of the Algerian Cultural Centre in Paris since 2007, the only Algerian cultural centre in Europe, and it has done very well under your guidance. You won't be running it from abroad, I assume? Is this a sign of exhaustion on your part?

Yasmina Khadra: I like Spain, I like the Spanish. I bought a house near Alicante three years ago. I feel comfortable among the Spanish, the kind of people who have maintained their cheerful, pleasant nature despite the financial crisis. I've made a lot of new friends in a short time. I'm a Bedouin. We put a lot of warmth into our interpersonal relationships. In the south of Spain, I find the kind of peace for my soul that I need to go on writing – and to uphold my love of humankind.

I came to the Algerian Cultural Centre to help support culture, which is marginalized in our country. The Algerian artists and intellectuals needed support. I'm here for them, I set a good example for them. I tell the Algerians: Do something for your people. I don't really need to work, I have millions of readers. But resting on my laurels would be purely selfish.

I presume you're working on a new novel?

Yasmina Khadra: Yes, I finished it at the end of June and it has the working title Qu'attendent les singes? ("What are the monkeys waiting for?"). It's about present-day Algeria with all the despicable things that are going wrong, about the people's anger and resentment, the political and intellectual grievances, the fight the Algerian women and men have to fight to get a minimum of human dignity.

I'd like to publish the novel while President Bouteflika is still in office. Being the director of the Algerian Cultural Centre doesn't mean I don't speak clearly.

Looking at Germany, eleven of your novels have been published there since 1997, many of them winning prizes. But L'Ecrivain, the autobiographical novel with which you revealed your real name in Paris in 2001, hadn't been translated previously. The book is coming out from the Hamburg-based Osburg publishing house in the spring of 2014, long overdue. Is that a special moment for you?

Yasmina Khadra: I'm always happy when translations of my books come out anywhere in the world. L'Ecrivain tells the story of my life as a child soldier, how I came into contact with literature. I think it's a good initiative to break down all the clichés and malice I'm often confronted with. A lot of journalists, especially in France, take me for a two-dimensional character – and they do me an injustice by never trying to understand me.

You've won numerous literary awards in Europe and America, including the Grand Prix de Littérature from the Académie Française in 2011. Since the summer of 2013 you've also had your own entry in the French encyclopaedia Petit Robert des Noms Propres – how does that feel?

Yasmina Khadra: It's very reassuring, because it means there are people in France who regard me as a novelist after all, rather than applying crude stereotypes.

Home
Print
Newsletter
More on this topic
Yasmina Khadra: "The Arab World is not just a Postcard with Dunes and Caravans"Yasmina Khadra: Love and Nostalgia in Times of WarYasmina Khadra: "The Sirens of Bagdad": The Logic of Terrorism
Related Topics
Arabic literature, Democracy and civil society, Dialogue of Cultures | Intercultural Dialogue, Islam and the West
All Topics

Shot, beaten to death or drowned: a demonstration by tens of thousands of Algerians ended in the "Paris Massacre" on 17 October 1961. Sixty years on, historians and victims' ... END_OF_DOCUMENT_TOKEN_TO_BE_REPLACED

The memory of experienced injustice plays a central role in the transformation of societies towards democracy. In the Arab world, the critical study of memory is only just ... END_OF_DOCUMENT_TOKEN_TO_BE_REPLACED

"The people aren’t ready for democracy" has been the constitutional basis for Arab tyranny, its favourite slogan and its sacred narrative for more than a century. Yet, asks Khaled ... END_OF_DOCUMENT_TOKEN_TO_BE_REPLACED

As current events continue to remind us, people all over the world are constantly being forced into exile. "Songs of Exile", created by Algerian Berber exile Abderrahmane Abdelli ... END_OF_DOCUMENT_TOKEN_TO_BE_REPLACED

A new survey by Arab Barometer adds numbers to the narrative that COVID has led to a harsher reality for women in the Middle East and North Africa. By Jennifer Holleis and Razan ... END_OF_DOCUMENT_TOKEN_TO_BE_REPLACED

Comments for this article: "There Is a Life after Defeat"

So long as he is politically convenient, West will pat his head

Would he [Mr Khadra] dare write about two German businessmen polluting the waters off the coast of Somalia? Showing the innocent side of Somalia (which we know exists) and the culpable side of the west (which you can bet your life equally exists) should be someone's task; who better to take it up than a "popular" African writer?

END_OF_DOCUMENT_TOKEN_TO_BE_REPLACED
Social media
and networks
Subscribe to our
newsletter