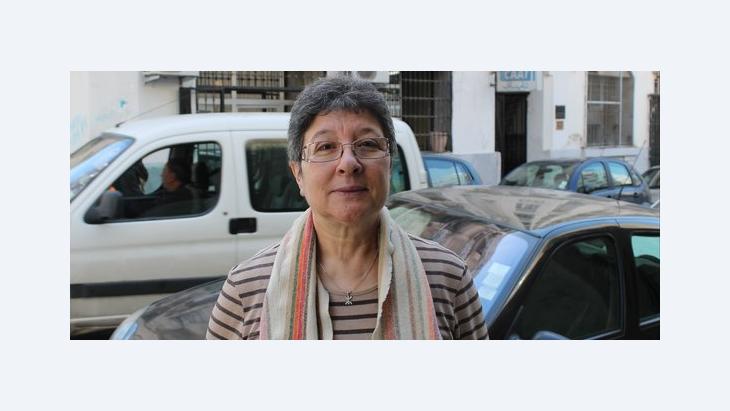 ''We need to completely change the system of government''

﻿The recent parliamentary election in Algerian has made little difference to the balance of political power. One thing, however, is new: there are now suddenly five times as many female members of parliament. Martina Sabra asked the Algerian lawyer and women's rights activist Nadia Ait Zai about what was behind this change, and about prospects for the future

Ms Ait Zai, for years now you and the women's organization you founded, CIDDEF, have been calling for the participation of more women in Algerian politics. What is your view of the result of the recent parliamentary elections as far as gender-related aspects are concerned?

Nadia Ait Zai: As far as gender-related aspects are concerned, the election result of 10 May 2012 is a considerable leap forward. A total of 145 women were elected to parliament out of a total of 462 delegates. That's almost a third of all the seats. In the last election in 2007, out of a total of 389 delegates only 31 women made it into parliament.

How do you explain this increase?

Ait Zai: The women's organizations fought for a statutory quota for women. The Algerian constitution calls for men and women to be treated equally before the law. Furthermore, Algeria has ratified the anti-discrimination convention CEDAW. Among other things, this deals with improving the political representation of women. One measure for the implementation of this convention was the extension of Article 31 of the Algerian constitution in 2008. Based on this, a quota for women was established in a law that came into force in January 2012. This law stipulates that Algerian women must be represented politically at all levels – local, regional and national.

The original draft of the law stipulated that at least 30 percent of the people's elected representatives were to be women. This proposal was dropped. Instead, quotas were established for the lists of candidates: 20, 30, 40 or 50 percent of the candidates put forward by the parties on each list must be women, depending on the size of the electorate in each constituency. What is your opinion of this?

Ait Zai: The political parties have cut the legal quota for women into little slices. The draft law actually said that women must be placed on the list in such a way that they have a chance of being elected. 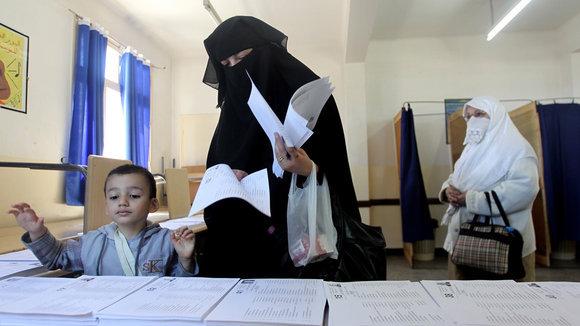 Political pressure by women's rights organizations is having an effect: the introduction of a legal quota was a contributing factor in the election of 145 women out of 462 delegates in the new Algerian parliament

​​But now the law does not clearly state where on the electoral lists the female candidates must be positioned. Nonetheless, the quota is in itself an achievement. Until recently it was up to the parties to decide whether they chose to have female candidates on their lists. Now, for the first time, we have a law that makes it compulsory for women to participate.

And in the last election the parties showed that they really were prepared to admit more women, in that women weren't just placed right at the bottom of the list; some at least were also positioned so that they had a real chance of getting elected. This political will is very significant. It has the potential for creating new, different relationships between men and women.

What role did the independent women's organizations play in enforcing the quota?

Ait Zai: The women's associations acted as pressure groups, and this pressure was effective. The information and documentation centre CIDDEF, for example, has been working systematically on this issue since 2003. We participated in a Maghreb-wide study on the subject of women in politics and pushed for changes at the highest level. The President has received our suggestions favourably.

What did CIDDEF do in the run-up to the elections to improve the female candidates' prospects of success?

Ait Zai: We gave a lot of women professional training. This mainly addressed practical questions, such as: how do you give a speech? How do you approach the voters – how do you communicate with them? How do you organize a public event? The women who participated in our workshops all stood for election. Twenty women altogether – it was a very positive experience. As well as giving them practical expertise, it was important for us that, if these women were elected, they would uphold the connection between civil society and parliament; that they would be the voice of society in parliament.

What effect will the presence of more women in the Algerian parliament have?

Ait Zai: The result of having a stronger female presence in parliament is that it is no longer seen as a purely male institution. Women have a different way of looking at things when it comes to making and passing laws. The female delegates will have to create a forum that deals especially with topics that are of relevance to women. 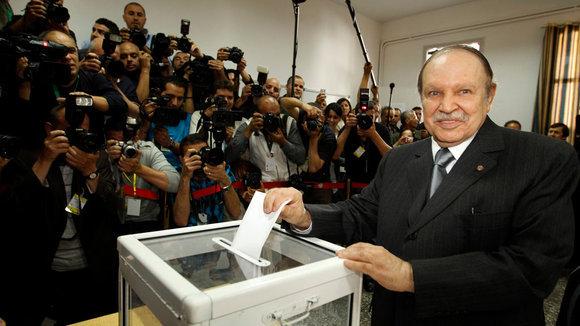 Holding on to power: the National Liberation Front (FLN), the party of the long-standing president Abdelaziz Bouteflika, secured a majority in the May elections with 220 of the 462 seats in parliament. Political observers criticized the elections, saying they lacked transparency and the result was not credible

Some parties have been accused of putting the wives or female relatives of top-ranking party officials on the lists so as to formally fulfil the quotas. Some of the women who have been elected represent political positions that do not accord with female emancipation. Do you believe that the new female delegates will actively devote themselves to the great 'gender problem areas': the reform of family law, and the law protecting women against violence?

Ait Zai: In some instances the parties had difficulty finding female candidates. In particular the new parties, of which there are more than two dozen, really had to search for people to complete their lists. That has a problematic effect on the quality of candidates, because in some cases women who had no political experience whatsoever were entered into the race.

We can't yet tell whether the new female delegates will make concrete efforts to fight for the rights of women and for human rights. Many women who were elected have never even addressed these subjects before, let alone fought for them. That's why we, as a civil society, have to use our independent organizations to push for them to put women's and human rights on their agenda. The female delegates are, after all, somewhat indebted to the women's organizations. Through their campaigns, these organizations contributed decisively to the fact that so many women are now in parliament.

How much political power does the Algerian parliament really have?

Ait Zai: Because the president has a very strong role, the power of parliament is relatively limited. The delegates discuss draft laws put forward by the government, but at the end of the day the Algerian parliament as an institution does little more than make announcements. The recent reforms won't make any difference to that. We need to completely change the system of government. Democracy is something that has to be built up. It's not just about elections, it's about institutions, about the division of power, about the autonomy of the judiciary, legislature, executive authority.

The intention is for the new parliament to pass constitutional reforms. But what will be in the new constitution? What status will be accorded to women's rights? What kind of system of government will we have? Will the president continue to be the one who wields the power, or will parliament be strengthened? These are the questions we have to discuss.

With a view to the coming legislative period and the upcoming constitutional reforms, what are Algerian women's priorities?

Ait Zai: At the end of the last legislative period we were already working with members of parliament on a law that would give women greater protection from violence. This draft law, which has already been put before the Parliamentary Committee must be taken up again by the newly-elected parliament. This must take priority.

Another topic is family law. In the last few years there has been some progress with regard to citizenship law, and on the issue of sexual harassment. But as far as divorce law or the custody of children are concerned, women are still discriminated against. So there is a need for reform. Another important aim is to set down clearly what representation women should have on political committees, and record this in a legal framework.

Professor Nadia Ait Zai teaches family law at the University of Algiers. She is also the founder and director of the Algiers-based independent documentation centre for women's and children's rights, CIDDEF.

Home
Print
Newsletter
More on this topic
Interview with the Algerian Journalist Adlène Meddi: The Illusion of Democratic ElectionsAlgeria and the Arab Spring: Opting for the Status Quo Rather than ExperimentationBoualem Sansal: What the Tragedy in Algeria Has Taught Us
Related Topics
Algerian Opposition, Algerian War, Democracy and civil society, Human rights, Islam and democracy, Muslim women, Women in the Islamic world
All Topics

While some are beginning to protest the lockdown, others are unable to bury their loved ones in accordance with Islam. Here’s the latest from across the region END_OF_DOCUMENT_TOKEN_TO_BE_REPLACED

Coronavirus continues unabated. Iran remains a hub of infection, war-torn Syria has recorded its first case and Yemen is bracing itself for the worst. Here’s the latest from ... END_OF_DOCUMENT_TOKEN_TO_BE_REPLACED

With borders closing and the opportunities for international travel shrinking by the hour, we take a look at coronavirus developments across the Middle East and the wider Muslim ... END_OF_DOCUMENT_TOKEN_TO_BE_REPLACED

As the global economy reels and everyday life grinds to a standstill, we take a look at the spread of coronavirus across the Middle East and the wider Muslim world – and the ... END_OF_DOCUMENT_TOKEN_TO_BE_REPLACED

Focussing on the Algerian protest movement, "Nardjes A." by Karim Ainouz, is about the universal power of hope to change the social and political status quo in the Maghreb country ... END_OF_DOCUMENT_TOKEN_TO_BE_REPLACED

Decades after the first French nuclear test in Algeria, thousands of victims are still waiting for compensation. To date only 51 claims have been filed under French legislation ... END_OF_DOCUMENT_TOKEN_TO_BE_REPLACED
Author:
Martina Sabra
Date:
Mail:
Send via mail

END_OF_DOCUMENT_TOKEN_TO_BE_REPLACED
Social media
and networks
Subscribe to our
newsletter