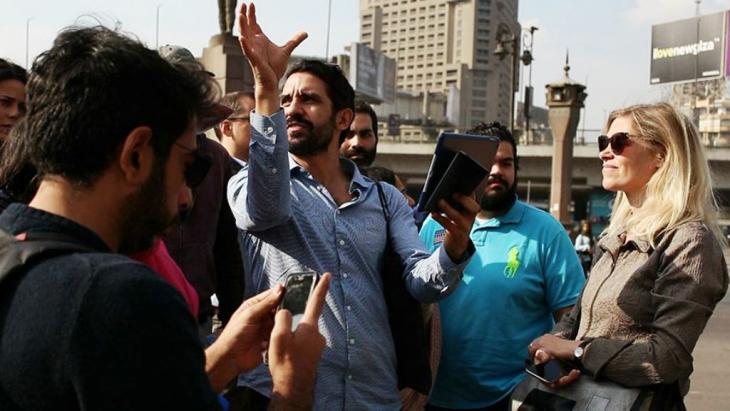 With his digital art project Augmented Archive, the artist Kaya Behkalam has created a subversive archive that describes the history of the Egyptian revolution of 2011 from the perspective of the citizens. With the help of the app, users can visit the sites of the protests and learn about their history. Interview by Eslam Anwar

Mr. Behkalam, how did you come up with the idea of the Augmented Archive?

Kaya Behkalam: Whoever has access to historical documents also determines the historiography and the meaning of important events in collective memory. Initially, the question was how to deal with the wealth of video material created in Cairo after the revolution of 25 January 2011. How can we re-define the documentation of historical events in the age of digitalisation?

Collective memory is fiercely contested. Egypt's power apparatus is trying to rewrite history and eliminate the revolutionary legacy of the youth movement that overthrew Hosni Mubarak.

I have seen how thoroughly the public space in Cairo has been cleansed of almost everything reminiscent of the revolution. I wanted to preserve these traces as important witnesses to the city's history.

Were you able to follow on from other projects?

Behkalam: I worked together with a group of Egyptian journalists from the media collective Mosireen, known for their project called "858", an open source platform intended as a video library for the resistance, which carries footage taken at the sites of the revolution.

This way of using the city and the public space as a historical document inspired me. You can now walk through Cairo and trace what has happened since 2011 using the app.

Digital archiving: with the help of the app, users can visit the sites of the protests during the Egyptian Revolution of 2011 and learn about their history

What were your biggest difficulties in implementing the project?

Behkalam: Developing an app was completely new territory for me. Previously, I had only been involved in videos and films. For this project I rely heavily on my partner, the programmer Farhan Khalid. Only when he's finished with his work can I get started. I am not used to working like that. But it has also forced me to question my own approach.

Your artistic work is about the interface between politics, media and historical documentation. How do you assess the current situation in Egypt today, seven years after the revolution?

Behkalam: The project reflects what I currently consider to be Egypt's biggest problem: the merciless domination of public space, be it the street or the Internet. There is no room in Egypt for critical or open debates about the experiences, conflicts and victims of recent years. With my project, I am trying to set a small example. With the Augmented Archive it should be possible to reflect again on this important period using documents such as videos.

We looked at how streets and squares in Cairo appear in today's context in order to reflect on the significance they had at that time and what events took place there following 2011.

Remembering a mood of optimism

How do you rate reactions to the app? And what cities have you covered to date?

Behkalam: At the moment the app only contains material from Cairo. That's why most of its users come from the Egyptian capital. A few hundred people share the app and keep giving me feedback. Every now and then users also report on their experiences when they look at the material on site, but so far only a few have contributed their own material. I hope that we will get more feedback in the future and that the app will not only be used for documenting, but also for communicating.

You are a visual artist, filmmaker and author. How do you cope with the different methods required by the various creative disciplines?

Behkalam: For me personally, these categories are neither important nor useful, perhaps they don't really exist. I move in a very wide field of creative possibilities and would like to explore new possibilities of expression in a non-academic form.

Aside from your project, you have worked as a lecturer at the American University in Cairo. What impact has teaching had on your artistic career?

Behkalam: I came to Egypt on February 12, 2011 and stayed there for more than five years. Originally, I only wanted to stay for one month as "Artist in Residence" in the context of an exhibition at the Townhouse Gallery in Cairo. When I realised how important the events after the fall of Mubarak were, I decided to extend my stay.

I began teaching at the American University. These years were very important for me personally, but also artistically and politically. It was fascinating to experience the spirit of optimism at the beginning of 2011 and to see how innovative forums and new debates emerged. This was not only the case in Tahrir Square, but also in district committees and at the American University. The curriculum was completely re-designed in response to political developments at the time.

Instead of the usual events on classical European art history, there were lectures, for example, in which it was discussed which non-European sources of art history could be relevant for the situation at that time.

What have you got lined up next?

This article was first published by the Goethe-Institut Cairo.

Kaya Behkalam lives in Berlin and Cairo. From 2012 to 2015 he was a lecturer at the Faculty of Art of the American University and director of the Sharjah Art Gallery of the University. The Augmented Archive project was developed with the support of the Goethe-Institut in Cairo.

Home
Print
Newsletter
More on this topic
Egyptian video archive 858.ma: Nothing but the truthEgypt: Archiving as an instrument of powerArt and revolution in the Arab world in 2015: Struggling against the restoration of "order"
Related Topics
Abdul Fattah al-Sisi, Arab Spring, Arabellion, Democracy and civil society, Egypt Revolution 2011, Egypt's army, History of the Near and Middle East, Mubarak regime
All Topics

The devaluation of the Egyptian pound combined with rising food prices is taking its toll on Egypt. More and more people are slipping into poverty. Karim El-Gawhary reports from ... END_OF_DOCUMENT_TOKEN_TO_BE_REPLACED

Abortions are illegal in Egypt unless they are necessary to save a married woman's life. But that doesn't stop local women from having one. Egyptian society needs to acknowledge ... END_OF_DOCUMENT_TOKEN_TO_BE_REPLACED

Food prices doubled, salaries halved, banks restricting withdrawals: Egyptians now have the same problems as the Lebanese. But if things get worse here, the fallout will be far ... END_OF_DOCUMENT_TOKEN_TO_BE_REPLACED

Giessen, Eichsfeld, Kusel, Berlin – cars bearing old German number plates are the latest trend on the streets of Cairo. Many Egyptians regard the discarded plates as chic. What ... END_OF_DOCUMENT_TOKEN_TO_BE_REPLACED

Egyptian Sufis have been on the defensive against the country's Islamists for decades. Meanwhile, interest in mysticism is growing among the young members of Cairo’s middle and ... END_OF_DOCUMENT_TOKEN_TO_BE_REPLACED

END_OF_DOCUMENT_TOKEN_TO_BE_REPLACED
Social media
and networks
Subscribe to our
newsletter