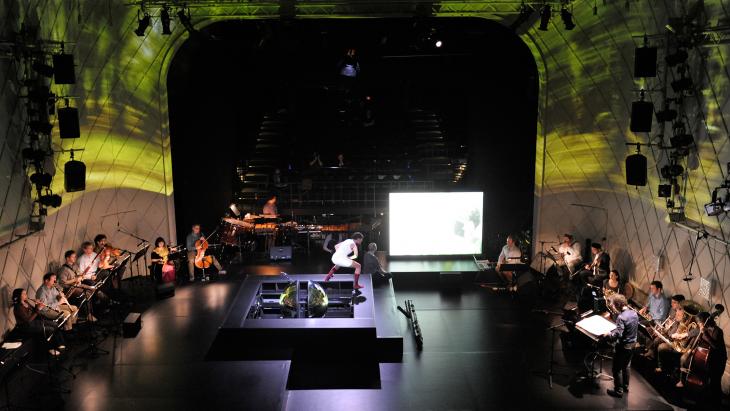 Dede Korkut, the best-known of the epic stories of the Oghuz Turks, and the music that goes with it form the basis of Marc Sinan's new docu-fictional musical theatre production, "Dede Korkut – The Story of Tepegoz". Astrid Kaminski spoke to the composer

Marc Sinan, your new piece of musical theatre, "Dede Korkut", is based on a great Turkic epic. Was this epic part of your childhood?

Marc Sinan: Unfortunately not. Firstly, I grew up in Germany. Secondly, my mother belonged to the generation of Ataturk-Turks who above all cultivated an interest in the West. Although that's actually quite a contradictory statement because the material only regained relevance in Turkey in 1928 by facilitating a connection with the pre-Ottoman cultural heritage in the context of national policymaking.

This epic is an integral part of folklore not only in Turkey, but also in Kazakhstan and Azerbaijan. If we were to compare it with the German "Song of the Nibelungs" or the Finnish "Kalevala", what status does it occupy there?

Sinan: My impression is that it's much more widely known. People there are as familiar with the different characters from "Dede Korkut" as we are with fairy tale figures. The individual stories can perhaps best be compared with Grimm's fairytales. But the stories are also told and retold in personal variations. Dede Korkut, the narrator, is a wise man and you'll often hear people say: "My Dede Korkut said ...", followed by a parable for children. There's also a Dede Korkut cartoon series in Turkey.

What do you find so fascinating about Dede Korkut?

Sinan: I wanted to concern myself with a myth or fairytale that's deeply rooted in Turkey, but that can at the same time be dislocated from it geographically. In my search for appropriate material, I sought the advice of Martin Greve, an oriental scholar and music ethnologist living in Istanbul. He said that my choice was really limited to "Koroglu" or "Dede Korkut".

Once you start looking into "Korkut", one of the first things you find out is that the only complete surviving manuscript is held at the State Library of Saxony. And because I was commissioned to write my piece by the Festspielhaus Hellerau in Dresden and the Dresden Symphony Orchestra, this was, naturally, a wonderful link. 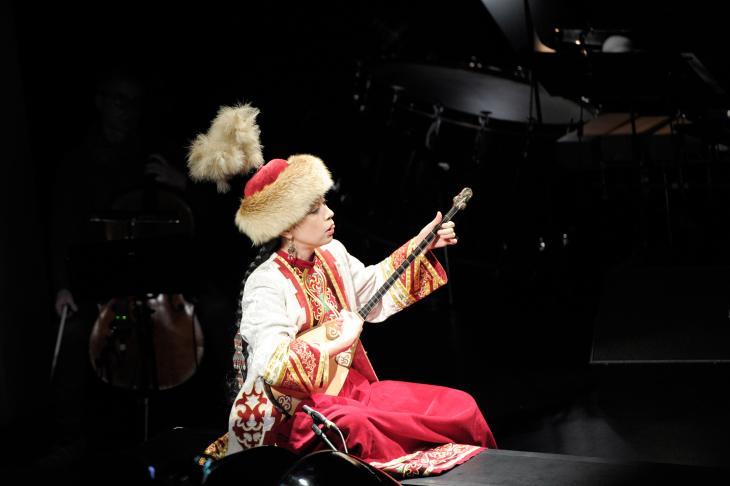 Preparation for Marc Sinan's "Dede Korkut" involved the composer conducting field research in Turkey, Azerbaijan, Kazakhstan and Uzbekistan over a period of more than four years with Markus Rindt, the Director of the Dresden Symphony Orchestra. The first impressions of these tours were captured musically on the CD "Hasretim", which recently won the German record reviewers' quarterly prize

I then got hold of a recent translation by Henrik Boeschoten – the manuscript is written in Arabic script, as was usual at the time – and stumbled upon two stories that fascinated me: texts titled "Deli Dumrul" and "Tepegoz". The first one had already been retold by the well-known Turkish-language writer Murathan Mungan in his book "Der Palast des Ostens" (The Palace of the East) in a very readable homoerotic version, in other words from a radical modern perspective. So that left me with "Tepegoz".

You interpreted both the texts and their attendant traditional music in your own tonal language, but the ensemble also includes traditional musicians from Uzbekistan, Kazakhstan and Azerbaijan playing on original instruments. In accordance with what criteria were they selected?

Sinan: It was important to me that all the templates I used had a connection to the epic poem. In other words, all the musicians should themselves have their own particular reference to the Dede Korkut material. There were two possibilities: they had to have played either pieces that clearly draw on the material or that make references to particular emotions in the text – revenge or seduction etc. In Kazakhstan in particular, there is a whole repertoire that has a direct connection to the material, which is actually derived from the historical work Korkut and which has survived to this day. This is comparable with the content of liturgical traditions in the Catholic Church, for example.

Your musical theatre piece is also the result of field research you conducted together with Markus Rindt, the director of the Dresden Symphony Orchestra. You collected 40–60 hours of material that is now being archived by the ethnological museum in Dahlem. Does this make you a kind of digital Bartók or Komitas of Turkic music?

Sinan: Well, in Dahlem they would probably see things differently, because we gathered material in a very unscientific manner. Although that was also the case with Bartók and Komitas.

The musical theatre piece also includes excerpts from interviews with Turkish experts. The writer and mythologist Sema Kaygusuz provides a highly political interpretation. For her, the fact that the rapist who produced the one-eyed man and, therefore, misfortune, was only cast as a foreigner as the story was passed down from generation to generation, forms an analogy with Turkey's policy on remembrance. She makes a connection between the non-recognition of one's own guilt and the Armenian genocide, among other things.

Sinan: She doesn't incidentally use the word "genocide", but adheres to the formulation of the young Turks responsible: massacre. I hadn't actually planned to refer to the Armenian or Kurdish story, it just came up in conversation. Sema Kaygusuz analysed different aspects of the material, but when she came to this point, I had to cry because it reflects my own story.

Your mother is of Armenian-Turkish descent. Did you grow up with an awareness of your roots?

Sinan: No one spoke about it in our family. My mother herself only realised relatively late in life the significance of her back story. The subject was suppressed at an even earlier stage by my grandmother. She was a devout Muslim who even made the pilgrimage to Mecca. This came up in conversation shortly before her death, and my mother said to her: "But you were a Christian as a child." My grandmother's response: "Don't say it so loudly, that's a sin." She had internalised the belief that her origins were a sin to such an extent that this is exactly how she passed it on to the next generation.

Kaygusuz touches on a significant point, that of dealing with collective guilt.

Sinan: All cultures have huge difficulties dealing with it. And it's interesting to note here how this fact is reflected in a text that has not been written by a single author, but in the context of oral tradition by an entire society. This is why a myth such as this is so loaded with cultural memory, because it has been retold and changed down through the centuries.

In our case, the text actually begins with a rape. Interestingly, however, not much is made of this initial event. No one mentions the violence perpetrated against the nymph, but instead only of the "monster", that was created by the act and that slaughters the heroes of a Turkish tribe known as the Oghuz. Judgement now has to be passed on him, and it's interesting that no one asks where it all began. If one was to deal with the story in a legal manner, the focus would be on the actual perpetrator of the original crime, justice would have to be done to the mother, and the poor child would have to be raised and borne by society.

Instead of being sent to "Guantanamo"?

Sinan: Yes, this is what you might call the solution to the Tepegoz story – and that is the essential error. In diluted form: people in Germany are now getting annoyed about the many difficult youngsters from the third generation of guest worker families from Turkey and even believe they have no place in this society, instead of considering the fact that the first generation was so badly treated that it was not able to integrate at all.

The balance of power on Europe's eastern borders is shifting. Georgian historian Beka Kobakhidze speaks from Tbilisi about rivalry and emerging alliances in the region, an ... END_OF_DOCUMENT_TOKEN_TO_BE_REPLACED

After more than a month of war, there is a new ceasefire between Armenia and Azerbaijan. But whether it will last remains questionable. The conflict in Nagorno-Karabakh sees ... END_OF_DOCUMENT_TOKEN_TO_BE_REPLACED

Sensitive to the threat of wider confrontation, Russia and Turkey are for now limiting involvement in the Nagorno-Karabakh conflict to providing humanitarian assistance and some ... END_OF_DOCUMENT_TOKEN_TO_BE_REPLACED

Azerbaijan and Armenia have been at war again over the Nagorno-Karabakh region in the South Caucasus for over a month. Three ceasefires have failed. The conflict is taking its ... END_OF_DOCUMENT_TOKEN_TO_BE_REPLACED

Fraught with disagreement, relations between the EU and Turkey under Erdogan have rarely been easy. Bearing in mind recent developments, the Union needs to present a clear and ... END_OF_DOCUMENT_TOKEN_TO_BE_REPLACED

The Armenian diaspora in France – the largest in Western Europe – is urging the country to do more to support Yerevan in the Nagorno-Karabakh conflict. But Paris is, so far, ... END_OF_DOCUMENT_TOKEN_TO_BE_REPLACED
Author:
Astrid Kaminski
Date:
Mail:
Send via mail

END_OF_DOCUMENT_TOKEN_TO_BE_REPLACED
Social media
and networks
Subscribe to our
newsletter