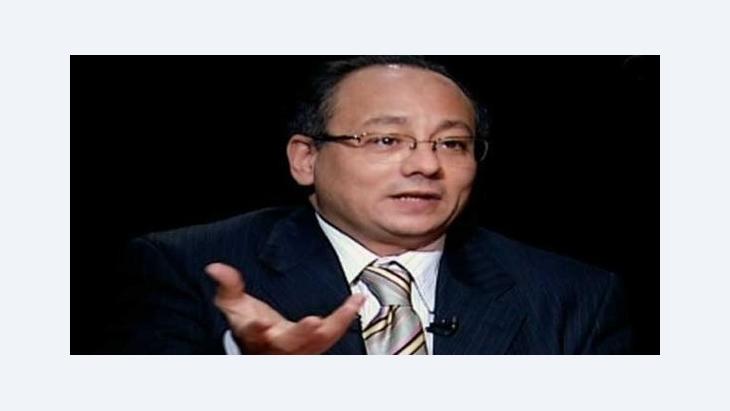 ﻿Emad Gad is a leading member of the Egyptian Social Democratic Party and vice-director of the Al Ahram Center for Political and Strategic Studies in Cairo. In this interview with Ute Schaeffer and Loay Mudhoon, he criticises the Islamization course being steered by Mursi's administration and explains how Egypt's liberal parties could act as a counterweight to the Islamists

﻿Egyptian President Mohammed Mursi has kept some of his promises: he has pardoned all demonstrators who were arrested during the revolution against the country's ousted leader, Hosni Mubarak. Prior to that he appointed a woman and a Copt to his team of advisers. Are you satisfied with his first acts in office?

Emad Gad: No. For me, these measures do not bode well, because the Muslim Brotherhood only wants to decorate itself with public figures; these people are not being given a say in important political decisions. In the second round of the election, Mursi promised that he would appoint a Coptic vice-president. But after the election, he didn't want to know anything more about it. His people told him that such a decision would mean that a Copt could rule the country in the event of something happening to Mursi.

What do the Copts expect of Mursi?

Gad: The Copts are calling for a civil society, a civilian state, in which they enjoy full civil rights and, of course, have corresponding obligations. We don't want any privileges; we want the same rights and obligations.

In Egypt there are entire sections of the state, such as the presidential apparatus, national security forces, and the secret services, which are not open to Copts. This is why many of them became entrepreneurs and went into the private sector. They are being systematically excluded from the institutions of state. Consequently, they don't expect much from the state. 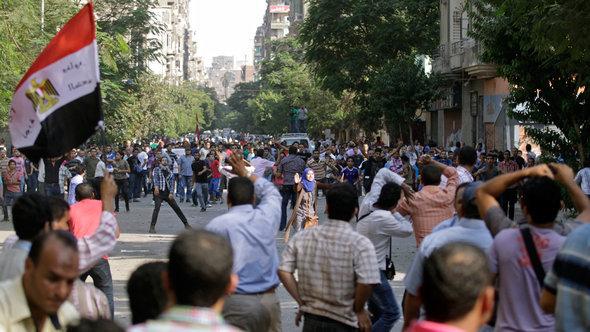 Anger spills out onto the streets of Cairo again: triggered by the dreadful economic situation and the stagnation in domestic politics under President Mursi, last Friday's riots were the most serious since the election of the new president in June. Gad says there is a real prospect of a "second revolution" in Egypt

​​Paradoxically, the Copts are now being accused of dominating a third of the economy. In addition, the Coptic faith is being defamed in a targeted manner in religious private media. Unfortunately, the organs of state are doing nothing to stop this.

Do you have a problem with the fact that Mohammed Mursi is a member of the Muslim Brotherhood?

Gad: I don't actually have a problem with the fact that a member of the Muslim Brotherhood is president. The problem with Mursi, however, is that at present, his actions only serve the interests of one group, namely the Muslim Brotherhood, and not the interests of all Egyptians. For example, the constitutional commission is currently arguing about whether the Egyptian state should co-finance the Coptic Church. It has never been co-funded by the state before. On the other hand, the Egyptian state funds Al-Azhar University and other Islamic foundations.

How did the Muslim Brotherhood manage to accumulate such an incredible wealth of power after Mubarak's departure?

Gad: That has a lot to do with the politics of the Supreme Military Council. The generals allowed religious parties to be set up in the first place. There were not actually any provisions for this in Egyptian electoral law. Exclusively religious parties are not permitted in Egypt. What's more, the military allowed the mosques and foundations to be used for political purposes. And now Mursi has decided that all members of the military council will automatically be members of the next parliament and will retain their seats for life; as a "thank-you", as it were!

But the disempowerment of the military was welcomed by the liberal opposition and the revolutionary youth groups ...

Gad: Mursi did not disempower the army. Instead he made a major power-sharing deal with them: the military council gives key positions to the Muslim Brotherhood, and in return, the military enjoys lifelong immunity.

What are the liberal and civilian parties doing to counteract the dominance of the Islamists in post-revolution Egypt? In theory, after all, they make up the majority in the country.

Gad: Within the framework of the civilian parties, we are working to build up a strong opposition alliance to the dominance of the Muslim Brotherhood. We all share the view that Mursi was only able to become president because the military council got Ahmad Shafiq, the former head of government, to stand against him. But Shafiq was completely discredited. 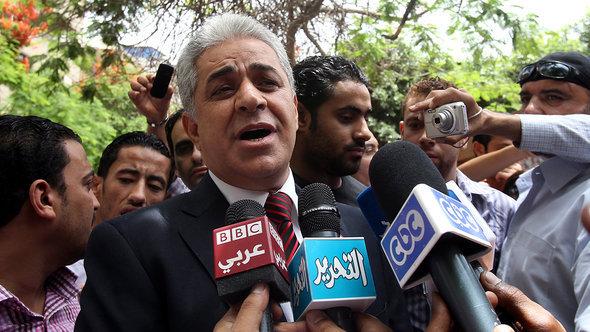 The Post-Nasserite great hope of the liberal, socially active left wing: Hamdeen Sabahi ran in this year's presidential election and is chairman of the Dignity Party. Gad says he would like to include Sabahi's post-Nasserite Dignity Party in the extended "third way" coalition

​​We would have liked to support a different candidate – such as Hamdeen Sabahi, who is popular and a man of the people – but the fact that the military council was so fixated on Shafiq cleared the way for Mursi to be elected president.

What development scenarios do you envisage for Egypt in the near future?

Gad: Under the leadership of the Islamists, Egypt is inexorably developing into a theocracy. For this reason, I see two possible development scenarios: at best, all non-religious, civil and liberal forces will combine to create a single opposition bloc at the next parliamentary elections, which are due to take place in half a year. The new parliamentary majority would in this way curtail the power of the president or redress the balance. After all, we urgently need an institutional framework for the division and distribution of power.

This is why we are talking to a large number of parties. Above all, we would like to integrate the new Constitution Party ("Hizb el-Dostour") of Nobel Peace Prize winner Mohamed ElBaradei into our coalition. We would also like to include the third "people's movement", which is represented by Hamdeen Sabahi and his post-Nasserite Dignity Party ("Karama"), in our extended coalition.

The Dignity Party is very important for the civilian movement in Egypt because it is rooted in rural communities and has many loyal and socially active supporters. It also speaks the language of ordinary Egyptians and knows what their lives are like. With this civilian bloc of parties, we would be a strong counterweight to the Islamists.

Is there anything that could jeopardise this project?

Gad: I see two major threats to this process of unification: first, the fact that the liberal civilian parties in this country seriously overestimate themselves coupled with the narcissism of their protagonists. Both Sabahi and ElBaradei would like to lead the new opposition movement. The second threat that I see is the "old boys' network" of the old regime. But that threat isn't as big. At the moment, this old network is trying to use the long-established Wafd party to drive a wedge between the new parties. But the narcissism and the inability of leading liberals to share power within our camp is the biggest threat.

And what is the second development scenario for Egypt?

Gad: I think there is a real prospect of a second revolution. After all, instead of pushing forward with a decisive reform programme, the Muslim Brotherhood has actually initiated very little. Their economic policy is restricted to raising credit. 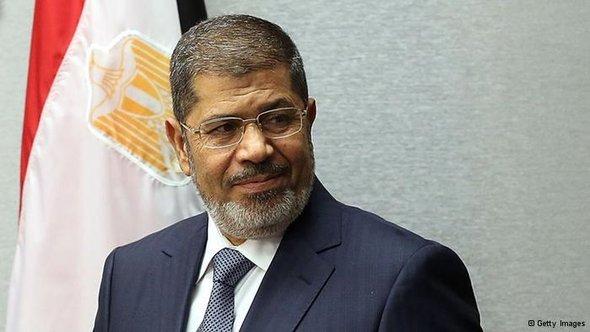 Emad Gad: "Mursi did not disempower the army. Instead he made a major power-sharing deal with them: the military council gives key positions to the Muslim Brotherhood, and in return, the military enjoys lifelong immunity"

​​As far as the catastrophic living conditions of Egyptians are concerned, nothing has changed since Mursi became president. The dissatisfaction in large parts of the Egyptian population is high, as is their willingness to revolt in the coming months. Many are just waiting for an opportunity.

But Mursi and the Muslim Brotherhood have shown on a number of occasions that they can be pragmatic ...

Gad: Yes, that is true. The Muslim Brotherhood is always pragmatic when it serves its own interests. Its declared objective of turning Egypt into a Muslim Brotherhood state remains. For 40 years, the Muslim Brotherhood said that its first and most important priority was to fight the Zionist foe. And what did Mursi say in his very first speech? Of course we will respect the Camp David Agreement with Israel. And during a party convention he assured the brotherhood that it would, of course, fight the terrorists on the Sinai Peninsula, if necessary with Israel's help.

What is so tragic about the current situation in Egypt is that the Islamist parties have neither a plan nor people who are capable of tackling the country's staggering economic and social problems.

Since President Abdul Fattah al-Sisi seized power in Egypt in 2013, he has ruled the country with an iron fist. Civil society, opposition and free press struggle to survive. Tens ... END_OF_DOCUMENT_TOKEN_TO_BE_REPLACED

The lack of grain supplies from Ukraine is forcing Egypt to act. Now even the Toshka project is being revived to grow grain in the desert. Birgit Svensson travelled to see it END_OF_DOCUMENT_TOKEN_TO_BE_REPLACED

In this unusually beautiful book of images and text, published in German and Arabic, artist Marianne Manda presents her own unique take on the megacity of Cairo. In over fifty ... END_OF_DOCUMENT_TOKEN_TO_BE_REPLACED

A stage, lights, a mesmerised audience: it looks like an Egyptian folkloric concert, but Umm Sameh is singing to heal the sick by driving out the demons that possess them END_OF_DOCUMENT_TOKEN_TO_BE_REPLACED
Author:
Ute Schaeffer and Loay Mudhoon
Date:
Mail:
Send via mail

END_OF_DOCUMENT_TOKEN_TO_BE_REPLACED
Social media
and networks
Subscribe to our
newsletter