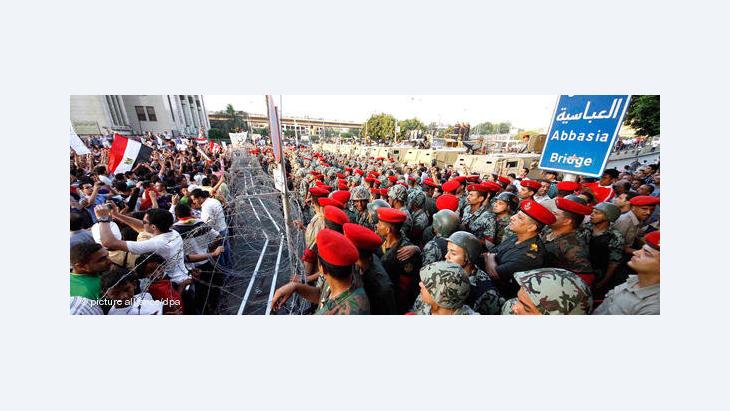 The recent protests in Egypt have focussed attention on the country's army and its conflicted relationship with the revolution of 25th January. Hani Darwish discussed the issue with the historian Khaled Fahmy in Cairo

What role has the Egyptian military played in the state and society since the July Revolution of 1952, and what, to date, have been the consequences of the army's special status?

Khaled Fahmy: From the historical point of view, on the one hand the Egyptian military distinguished itself through the so-called July Revolution, which in nature was essentially a coup. Secondly, it has never considered itself an army of defeat or decline. And after the peace accords [with Israel – Ed.], it eventually became Mubarak's army.

It has not yet been possible for historians to shed light on every aspect of these three phases, as the archive of the Egyptian Army is not open for the purposes of research. And discussing individual military personnel is still absolutely taboo. So we are forced to fall back on the information that can be found in books and newspaper articles abroad in order to discover a little about this secret. 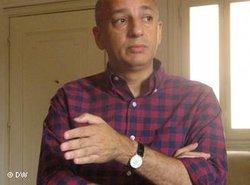 Whither Egypt? Both the Egyptian army and the Muslim Brotherhood lack clear political concepts and a strategic vision for the future, says historian Khaled Fahmy

​​The most important thing that has emerged from the revolution is the necessity of examining this institution more closely. After all, it chooses to present itself as the "property of the people". It is made up primarily of conscripts, and the society that has entrusted the military with its defence has the right to monitor it and examine its activities. However, this is precisely the reason why the military is currently trying to withdraw from this influence.

Were you surprised by the way the army behaved over the course of the revolution of 25th January?

Fahmy: The military was taken by surprise and saw itself compelled to sacrifice Mubarak. Ultimately, its sudden about-face and support for the revolution was a clever decision, tactically speaking: the army sacrificed the political wing of the regime in favour of preserving the integrity of its military wing. After the people in the square had, right at the beginning, chanted the slogan "People and army go hand in hand" in order to reassure themselves and draw the army firmly onto their side, the military made haste to adopt this slogan as their own.

But the past three weeks have been a huge setback for the armed forces; they're effectively having to start all over again. The chaotic management of the transition phase – the protracted legal proceedings, defending the security services, stalling the case against Mubarak – and the latest threatening speech by one of its commanders are all evidence that the military's common sense is being put to the test.

Can we say that a transformation of the army has been initiated since the fall of Mubarak, or is it just a new version, or retention, of the old structures?

Fahmy: Because of the accusations the young revolutionaries have made against the army – that they are being slow to implement their demands – the relationship between them and the military council is not of the best. 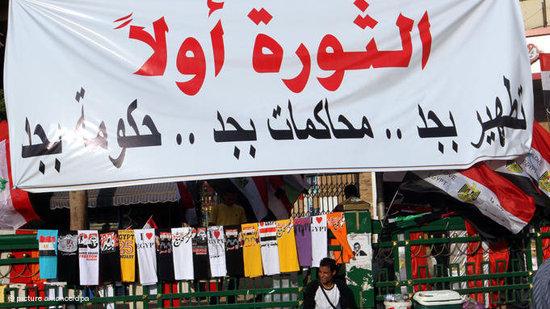 "The revolution first!" – Demonstrators in Egypt's Tahrir Square call for a clear process of democratisation with genuine reforms, and accuse the army of grabbing power for itself

We can therefore say that there is a continuation of the "private Mubarak version", as foreign observers of the Egyptian army have been describing it since as early as the end of the 1960s and early 1970s. Ever since his days as head of the flying school Mubarak has been renowned for his iron discipline. As a lowly military bureaucrat he was able to control his environment by punishing even insignificant mistakes and treating his subordinates to small acts of malice.

So you believe that all the negative influences in the army can be linked to the person of Mubarak?

Fahmy: No, certainly not all. If we remind ourselves, for example, that most of the advantages of the US military aid for the Egyptian army benefit its high command, we realise the whole extent of the internal corruption. Add to this the advanced ages of Mubarak and the chairman of the Supreme Council of the Armed Forces, Mohammed Tantawi, as well as those of two or three other people over the age of 70, and we see the vast generation gap that Mubarak has created with his policy of forcing out of the army all Egyptians who took prominent roles in previous wars. This explains the fact of the young commanders joining the demonstrators on 9th April in support of the revolution.

Do you believe that these structural differences within the military are helpful for the revolution?

Fahmy: Yes, because the current confusion in the military council is partly the result of its internal division. I would like to tell you a curious story. I recently met a representative of the old regime. He told me how, at the meetings of Mubarak's ministerial council, Tantawi appeared to favour leftist ideas. For example, he opposed the measures to privatise the national banks, for the simple reason that these banks serve to conceal the army's financial and economic activities. According to this senior official, Tantawi gained tremendous satisfaction from being able to thwart the liberal economists, not because of any conviction on his part that the state should be able to influence economic life, but in order to protect the interests of his own apparatus, whose companies control large parts of the Egyptian economy.

The military is now using the same logic to oppose the idea of a civilian taking over leadership of the state. They cannot imagine Egypt becoming like the United States, where a civilian, as politician and president, can dismiss the minister of defence; or where the press, for example, is able to question the military capabilities and competence of a chief of staff. That, for them, is a red rag to a bull.

Don't you think that the spirit of the revolution of 25th January is also to some extent borne up by discontent over the power of the military?

Fahmy: Certainly, because for a long time the army was sheltered by its barracks. It subsisted solely from its constituent, symbolic premium. Now, however, reality is causing this premium to shrink, because after the revolution the army provided no security either for its opponents or for its supporters, nor has it instigated any far-reaching verdicts or brought justice. 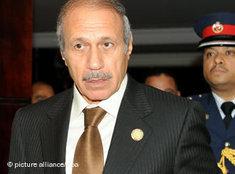 The focus of the Egyptian revolutionaries' anger: Former Interior Minister Al-Adly and six other senior members of the government are currently in court on charges of corruption and the killing of civilians during the revolt against the Mubarak regime

​​The longer the army remained locked into the political process, the more people dared to go out onto the street, to chant slogans that not even the lowliest officer in his worst nightmares could have imagined. The longer they stay on the streets, the wider the gulf that is opening up between the political apparatus and the rank and file officers, who sympathise with the people and are contemplating how very different their lives are from those of their generals; especially now, after the discovery of cases of corruption running into the hundreds of billions.

Do you consider the alliance between the army and Islamist forces to be the result of a conservative-traditionalist or an Islamist tendency within the army, which since the 1980s has been influenced by the new current of piety within Egyptian society?

Fahmy: In my opinion there is an identity crisis within the army. Some see in Tantawi's wife's headscarf a leaning towards Islam, others see a move away from faith in his gold wedding ring. There is no real information about the nature of piety in the ranks of the army. However, this tactical alliance came about because the Islamists were tempting the army with the prospect of an alliance, and the people on the street made it possible. The army saw in the Muslim Brotherhood a group that could help them win the referendum on changing the constitution. The problem is that some liberals and nationalists are brandishing documents and proposals saying that in future the army should be granted a position that places it above all criticism.

At the moment there is much discussion about an "Erdogan model". The presidential candidates Abdel Monem Abu el-Fatouh and Mohammad Salim al-Awa are pushing the idea of a balance of power between the army and Islamist forces along Turkish lines. What do you think of this?

Fahmy: I lived in Turkey for some time, from 1989 onwards, so at the time when Necmettin Erbakan's project was just beginning. Things are different there to the way they are in Egypt. The Turkish Islamists have distanced themselves from the framework of Islamic identity. They attained power because prior to this they addressed the problems of the middle classes in a socio-economic discourse. The Egyptian Islamists, on the other hand, are focussed on the question of identity and fail to recognise the historical context that has led to the success of the Turkish model.

I don't believe that the current political wrangling over Egypt's identity is sufficient to forge a long-term alliance between the two sides, because the Islamists are not putting forward a clear concept for Egypt. Long-term, an alliance between them and the army would be full of risks. Both sides lack a strategic vision for the future. This depends, however, on the interaction of numerous forces, which will not provide either with the opportunity to determine the country's fate alone.

The Egyptian historian Khaled Fahmy is the Chair of the Department of History at the American University in Cairo (AUC).

Tourists have been returning to Tunisia, Egypt and Morocco. But, given the global uncertainty caused by the Ukraine war, will the comeback be enough to save a struggling sector, ... END_OF_DOCUMENT_TOKEN_TO_BE_REPLACED

In this essay, renowned Lebanese journalist and writer Hazem Saghieh asks whether the Arab Levant, which stretches from Iraq in the East to Egypt in the West, will remain an ... END_OF_DOCUMENT_TOKEN_TO_BE_REPLACED

By 2050, the Middle East and North Africa could be dealing with many more elderly people suffering from dementia. A lack of facilities, specialists and local knowledge means the ... END_OF_DOCUMENT_TOKEN_TO_BE_REPLACED

With his fist bump greeting for a man he previously called a pariah, US President Biden has paved the way for Saudi Crown Prince Mohammed bin Salman's return to the international ... END_OF_DOCUMENT_TOKEN_TO_BE_REPLACED

Foresight is needed to turn the tide of German policy. Being independent of Russia must not lead to dependence on authoritarian regimes in the Middle East. By Kristin Helberg END_OF_DOCUMENT_TOKEN_TO_BE_REPLACED
Author:
Hani Darwish
Date:
Mail:
Send via mail

END_OF_DOCUMENT_TOKEN_TO_BE_REPLACED
Social media
and networks
Subscribe to our
newsletter