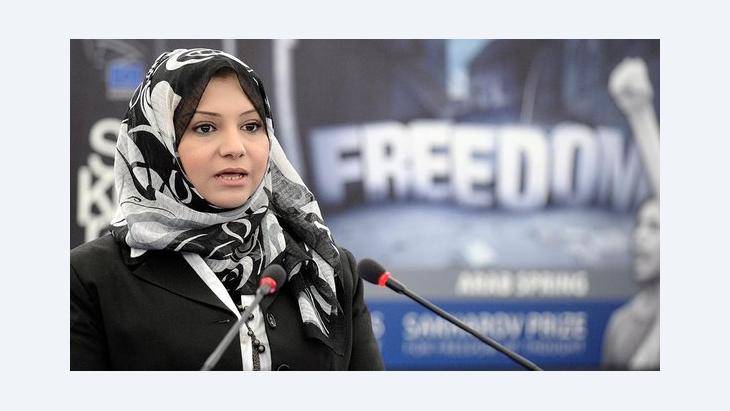 ''There is no war between Islam and America''

﻿Asmaa Mahfouz is one of the founders of the April 6 Youth Movement. She has been credited with helping to spark mass uprising through her video blog posted one week before the start of the 2011 Egyptian revolution. In this interview with Nina zu Fürstenberg, she shares her concerns and hopes for the Arab Spring

﻿You were one of the main protagonists of the Arab Spring with your social media engagement. Are you happier with the situation in Egypt now?

Asmaa Mahfouz: Not really. We really need to focus on the constitution. It is too limited. We need a constitution that defends and protects all Egyptians, not just some. We need to get as many people as possible engaged with this constitution. We are trying to push the Muslim Brotherhood in the right direction.

Have you and the young people of Tahrir Square organized yourselves in a group?

Mahfouz: No, we haven't actually. We are trying to reorganize ourselves. It is difficult because many people hate the Muslim Brotherhood. While others, like myself, are critical of them but would like to have a constructive influence.

Mahfouz: The Muslim Brothers have many roots everywhere. When you speak to individual members, you will find good men with good intentions. But if you're hoping to see these intentions carried through by party leaders, you soon realise that they are for the most part pursuing their own interests. They are not as good as they appear. Most Muslim Brothers have good intentions but no voice. 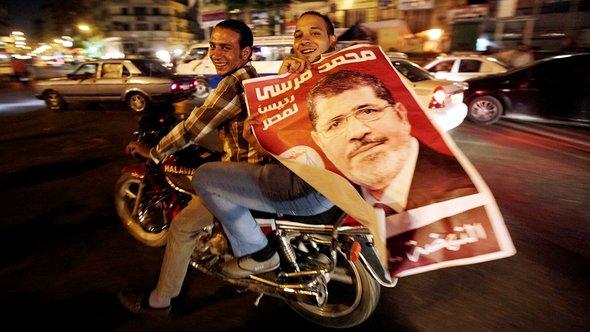 Asmaa Mahfouz: "Morsi is an elected president, and this is a step in the right direction. But current conditions favour elite social groups over the common citizen. The president needs to listen to the people"

​​Several have even decided to quit or regroup in order to express their political ideas and Muslim actions. So although I may criticise the Muslim Brotherhood, my criticism is not aimed at everyone, it's the leaders I don't trust.

What's your view of President Morsi?

Mahfouz: I met Morsi twice. He's a good man, but he can't operate independently of the Muslim Brotherhood or his team of advisers. But, I pray for him and everyone should pray for him because he is our president. I cooperate with the president's team. We let them know what is going on in the streets, give Morsi ideas and help to be connected with the people. He is an elected president, and this is a step in the right direction. Mubarak was not an elected president, but now we are able to have an influence on many decisions.

In your opinion, what are the most important steps that need to be taken at this stage?

Mahfouz: Firstly, the constitution should be amended, because it currently favours the Muslim Brotherhood by 80 percent. It needs to open up the political stage to more groups and give them a chance to participate. Secondly, we need to convince Morsi that this is not a government just for the Muslim Brotherhood, but for all Egyptians. They are only a part of the overall picture. And thirdly, that social justice should be applied across the board. Current conditions favour elite social groups over the common citizen. The president needs to listen to the people.

Do young people have better perspectives now? Are there more jobs available?

Mahfouz: Yes, but if the president had greater powers he could create more jobs in this country. I believe that we have money in Egypt, but it is not distributed properly because there is no transparency. It's like a closed black box. We don't know anything about it.

As far as your generation is concerned, if someone wanted to found a company or small business, would it be possible to get funds for that?

Mahfouz: Not in Egypt. The only way to obtain any money is through personal connections with government insiders. That's why I believe the situation is not due to the economic crisis. It's more about political favours, and not about the economy. For example, Morsi and I discussed introducing a minimum wage. He said the government cannot afford to do this – although members of his government take as much as they can, and there is no way around this. He could make cuts to higher government salaries and distribute to those at the bottom of the pay scale.

So the change you had hoped for, is really not much of a change at all?

Mahfouz: No, we need time. We've only just got the ball rolling. We need to be smarter and use different techniques to keep up the momentum for change.

How do people in Cairo feel about the Mohammed film crisis? You took part in the protests at the US embassy – what were the demonstrators saying?

Mahfouz: We had heard that in America a big movie would be shown that insulted the prophet Mohammad. It angered us all very much, including myself. Then, searching the American media I eventually found this film. 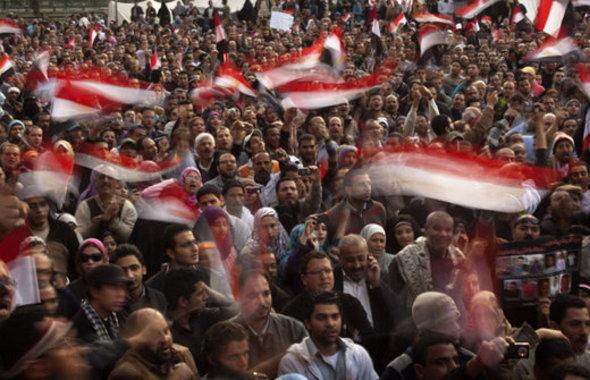 Asmaa Mahfouz is a prominent member of Egypt's Coalition of the Youth of the Revolution and one of the leaders of the Egyptian revolution. In 2011, she was one of five recipients of the "Sakharov Prize for Freedom of Thought" awarded for contributions to "historic changes in the Arab world". Pictured: Anti-Mubarak rally on Tahrir Square

​​It was a silly trailer without taste or substance. When I tried to find out where this movie would be shown in America, I found nothing. Somebody had done an Arabic translation and posted it on the Internet. So I decided to ignore it. To defend the prophet Mohammad, we have to be like him and act like him, and spread his words and peace. I don't know if it was a good idea, but it's all right for people to protest. So I went to the US embassy to see what was happening.

Did the police respect the right to protest on this occasion, or were there clashes?

Mahfouz: There's always been a heavy police presence at the US embassy, for as long as I can remember. There were no police at all when we went down there. I wondered what had happened, after all US policies – for example in Afghanistan, Iraq and Iran - are met with great hostility, not only here in Egypt but around the world. But that day there were no police officers on duty. Many extremist Islamists and young people were protesting and shouting slogans, calling on Americans to accept Islam and our prophet. People were waving the black flag of ancient Islam – made famous again since the jihadists started using it.

Some started drawing graffiti on the embassy walls, which was wrong and against the law. Others climbed the walls of the embassy, took the American flag and burned it. It was very strange, but there were no policemen there through all of this. The police were back on duty on the second day, and violently attacked everyone instead of protecting us. There were more protesters and they clashed with the police.

Were these protests different to those that took place on Tahrir Square?

Mahfouz: Yes, they were attended by very different people. I talked to many people at the embassy protest. It was hard to find two with the same perspective. People came for different reasons. Many got involved in the clashes because they wanted their revenge on the police. Some went because they hate President Morsi and Egypt's relationship with America. Others joined in because they blame America for past political turmoil in Middle Eastern countries and others participated because they were easily convinced by all the commotion. The clashes were portrayed in the media as nothing more than a conflict between Islam and the US, but this was not the true picture.

Mahfouz: The reaction of the Egyptian people to the US ambassador's death in Libya was not right, with many expressions of joy on Twitter and claims that the killers “took their revenge”. My response was that our Prophet Mohammed taught us not to attack anyone who does not possess a weapon and in Libya the victims had been unarmed. Tweets reflected this sense that revenge had been taken, as well as anger concerning Afghanistan and Iraq. 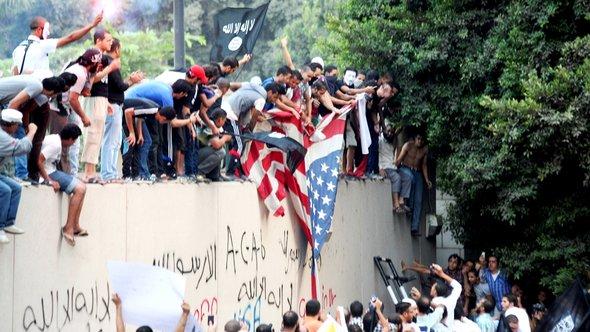 A plethora of motives: "The clashes at the US embassy in Cairo were portrayed in the media as nothing more than a conflict between Islam and the US, but this was not the true picture," Asmaa Mahfouz says

​​It was less about Islam and more about how the US has killed many people in other countries, although the media neglected to mention this. But now, after the Arab Spring, is the time to address this.

Did you attempt to explain the Mohammed film to those on Twitter?

Mahfouz: We tried to explain on Twitter and other media outlets. Although our media is not entirely free, it is a forum where many views can be expressed. And I tried to talk to the people on the street in front of the US embassy, but it was difficult. People claim that I'm defending the Americans, that I'm working as a spy for the US, and that I'm against Mohammed. What I try to do is help my American friends to understand what is really going on in Egypt. For example, I sent pictures and messages to my journalist friends in the US, so that they could publish what was really going on.

I hope this will show the Americans that this is not a war between Islam and the US. But as I said before, it is a kind of revenge on America. I felt that it was a protest against Obama and against our new President after the Arab Spring. It was a way to test him. But it also shows that we have created a new world after the Arab Spring with more opportunities for the Arab world, including giving the people a voice.

Very few Egyptians have ever been to America or are really acquainted with its way of life. I went to America and saw that it is a very large country with all kinds of people. One can't judge America by this film. I know this very well, because I attended many conferences about Islam, and the American people are not against Islam. Should anyone have views contrary to Islam, they are free to peacefully protest. That is freedom.

Looking outwards with the knowledge from within: a conversation with the Iraqi writer Sinan Antoon on the future of his homeland. Interview by Lena Bopp END_OF_DOCUMENT_TOKEN_TO_BE_REPLACED

The Iranian people are being held hostage by the confrontation between America and the regime in Tehran. Stefan Buchen considers in his essay whether the country's culture can ... END_OF_DOCUMENT_TOKEN_TO_BE_REPLACED

The assassination of the Iranian general Qassem Soleimani in a surprise U.S. drone strike is being used by the Islamic Republic of Iran to political ends, says Iranian journalist ... END_OF_DOCUMENT_TOKEN_TO_BE_REPLACED

In recent years, Tehran had pushed a clever public-relations campaign to depict Soleimani as a Napoleon- or Caesar-like warrior-poet. He was even mooted as a likely presidential ... END_OF_DOCUMENT_TOKEN_TO_BE_REPLACED

Trump’s sweet revenge could swiftly turn bitter, after all the U.S. attack is a direct declaration of war against the Iranian Revolutionary Guard and its elite Quds troops ... END_OF_DOCUMENT_TOKEN_TO_BE_REPLACED

With "Assad or We Burn the Country", Sam Dagher has furnished the world with some genuine ammunition against the Syrian regime's on-going campaign of disinformation. The only ... END_OF_DOCUMENT_TOKEN_TO_BE_REPLACED
Author:
Nina zu Fürstenberg
Date:
Mail:
Send via mail