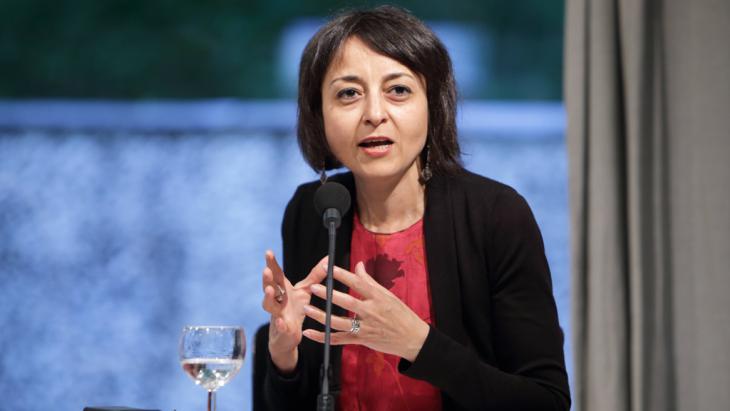 Iman Mersal, part of Egypt′s 90s generation, is one of the most interesting voices in contemporary Arabic poetry. Her work has been translated into more than a dozen languages, with poems from her much-awaited ″Until I Give Up the Idea of Houses″ (2013) currently being rendered into English by Robyn Creswell. Interview by Marcia Lynx Qualey

You said in a Poetry Parnassus interview that you don′t really relate to protest poetry. Yet some of your poetry could be read as protest, in a sense. Why particularly did you want to distance yourself from protest poetry?

Iman Mersal: As a writer, it isn′t my intention to distance myself from any kind of poetry. As a reader, I can speak about the poetry I can′t connect to. I grew up with grand narratives about the nation, about the future, full of ideology. I was studying Adonis in my MA for example and I would stay up late at night reading poetry that I could not relate to, despite its beauty, its language and images. He′s a great poet, a prophet who is trying to change the world by changing the Arabic language and culture, but he does not speak to me.

I was struggling with something else; the desire to understand myself, to deal with dark moments in everyday life, with memory. I was interested in the complexity of my relationship with my father, friendship, with authority in a very broad sense, not just religious or political. I was discovering individuality and was searching for my own voice.

Who else did you grow up reading, other than Adonis?

Mersal: In general, poetry is the genre I read least. However, the Golden Age of Arabic poetry was my main source of poetry from high school onwards. Modern Arab poets such as Mahmoud Darwish, Amal Donqol and Salah Abdel Sabour among others.

I wrote an article last year about the Syrian poet Sania Saleh and I was just lamenting the fact that I grew up thinking that there were no modern Arab female poets for me – until I read Sania Saleh, just three years ago or so. And this makes you wonder: why such poetry was not available to me as a young reader? I think if I′d read her early in my life, it would have been fantastic.

How widely do you read now? Is it important to read "widely"?

Mersal: It′s not just important; it′s one of the greatest pleasures. We used to read translated poetry as young readers. Even though some of the translations were quite bad, they had an impact on us. We discovered the diversity of what we call poetry. Reading, for example, Constantine Cavafy, W. B. Yeats, [Wisława] Szymborska, Emily Dickinson, Nicanor Parra, [Anna] Akhmatova.

How do you get to know new voices now?

Mersal: I follow the Arabic poetry scene closely and enthusiastically. There are so many excellent female poets at the moment who are worth reading. Lately, I′ve enjoyed reading Aya Nabih, Asmaa Yassen and Malaka Badr, among so many others. As for non-Arabic poetry, I connect with it through the English and Arabic translations and by participating in international readings. You meet so many poets in life, but there are only a few that you admire and feel in dialogue with. 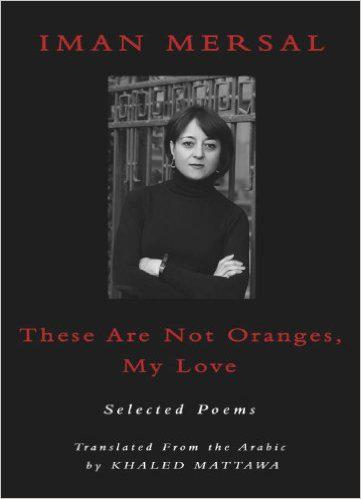 "After a while, you have to give up guardianship over your poems, allowing them to migrate to new languages and homes. You imagine that your voice is carried through the air to ears far away from you; it is impossible to determine how your voice will reach the other side," says Mersal

For example, I met the Macedonian poet Lidija Dimkovska at the Rotterdam poetry festival in 2003, then saw her in Ljubljana twice and we′ve since become friends. Other poets that I met at such events and highly recommend are the Albanian Luljeta Lleshanaku whom I met at Parnassus, London 2012, the Dominican Frank Baez and the Chilean Nadia Prado whom I met in Nicaragua the same year. In Edmonton, where I live, there are some really good poets such as Bert Almon and Shawna Lemay. It is always a gift to discover a fine poet or even a fine poem.

Is there a literary scene you feel particularly close to?

Mersal: I was invited to Slovenia in 2007 for an independent poetry reading called Days of Poetry and Wine. I was the only Arab poet there. They translated the participants′ work before the event and published it in English, Slovenian and the original language, so I was actually able to read the poets I was spending days with.

I felt that a window was opened. There are so many similarities in questions and images between them and the Arabic poetry written since the 90s. You can imagine a poet in the 1990s living in post-Communist Romania and imagine me living in Cairo during the decline of so many ideologies including Arab nationalism, the events of the Iraqi war and Palestinian crises. We almost crossed the same threshold. I felt as if we are individuals who experienced the same formative moments through their own, distinct cultures.

Mersal: I am afraid to translate poetry. Maybe because it is a heavy responsibility. But I have been questioning this fear lately and thinking that it might be silly.

Would you rather be translated by someone who is not a poet or non-poet?

Mersal: There is always anxiety in the act of translation, carrying a text from one culture to another. Khaled Mattawa′s translation of my work, which is the dearest one to my heart, was not free from this anxiety. There were moments when I thought: he is a fantastic poet and a translator, will this mean having two voices struggling inside my poems in English, mine and his? With a translator who is not a poet, I would have different worries.

After a while, you have to give up guardianship over your poems, allowing them to migrate to new languages and homes. You imagine that your voice is carried through the air to ears far away from you; it is impossible to determine how your voice will reach the other side. It may sound more elongated or softer than it really is; it might be grandly eloquent, as if you are an elite native speaker. The translator who selects my poem and sits there struggling to put it in his or her own language, has the right to rewrite it – as long as my accented voice survives its journey to the destination.

Iranian-Canadian author Ava Farmehri’s debut novel paints a bleak picture of growing up in Iran after the Islamic Revolution. The book is both a prison novel and a reflection on ... END_OF_DOCUMENT_TOKEN_TO_BE_REPLACED

Last week Egypt's police stepped up an "unprecedented escalation" on activists by arresting a leading rights group director. Advocates on the Nile have long weathered a crackdown ... END_OF_DOCUMENT_TOKEN_TO_BE_REPLACED

In France and in Canada's Francophone province of Quebec issues of personal freedom have recently been thrown into sharp relief. In Quebec, legal proceedings have been initiated ... END_OF_DOCUMENT_TOKEN_TO_BE_REPLACED

A friend of the murdered journalist Jamal Khashoggi, Omar Abdulaziz is a thorn in the side of Saudi Arabia. Living in exile in Canada, the activist has been warned by the police ... END_OF_DOCUMENT_TOKEN_TO_BE_REPLACED

In 2017, Sarah Hegazy was arrested in Cairo for displaying a rainbow flag, the symbol for homosexuality and queerness, at a concert. The activist recently took her own life in ... END_OF_DOCUMENT_TOKEN_TO_BE_REPLACED

In June Canada's French-speaking province Quebec passed Bill 21, banning the wearing of religious symbols or garments by certain public servants in the workplace. Aside from the ... END_OF_DOCUMENT_TOKEN_TO_BE_REPLACED
Date:
Mail:
Send via mail

END_OF_DOCUMENT_TOKEN_TO_BE_REPLACED
Social media
and networks
Subscribe to our
newsletter