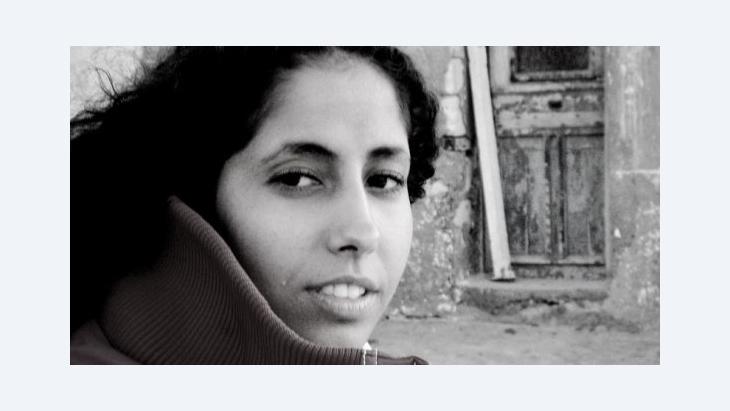 ﻿As far as the West was concerned, the overthrow of Hosni Mubarak meant that the system had been changed. But for many young Egyptians, the uprising has continued. Hans-Christoph Zimmermann spoke to Laila Soliman about what it's like to live and make theatre under the rule of the Supreme Military Council

Since the overthrow of Mubarak, we hear here in Europe almost nothing about the Egyptian revolution. How much energy does the uprising still have left?

Laila Soliman: The number of demonstrators has gone down from what it was in the first eighteen days: people get different information now and have differing views about what the priorities should be. So the resistance has split into various little struggles and resistance groups – which, of course, doesn't help the broader resistance movement.

How do you judge the current situation in Egypt?

Laila Soliman: Currently, there are a lot of parties being founded. Some of them seem interesting, and we are waiting to see how they present themselves. The situation is fragile, because everything is new for us: the parties and their relationship to the transitional government and the military. Who plays which role? What is one allowed to do? What is one not allowed to do? It's a kind of probationary period until the elections, which I hope will come soon, although I'm a bit pessimistic about that.

Since Mubarak was overthrown on the 11th February nobody says anything about the army, and above all about the Supreme Military Council. The military has its own censorship. And the journalists are very careful about what they write because they don't want to lose their readers. 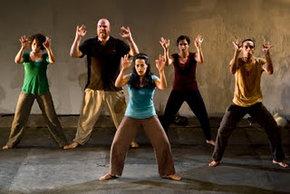 Creating an alternative version of history with the means of theatre: scene from Laila Soliman's and Ruud Gielens' "Lessons in Revolting"

​​Of course, now more is being said about the injustices of the military and of the military justice system. We also want to report on what the media doesn't talk about. One of the aims of my work is to create an alternative version of history with the means of theatre. Especially now, where one can already see how the official history is being written.

Did that provide the impulse for your piece "Lessons in Revolting," which premiered in Cairo in July?

Laila Soliman: The eighteen days of the revolution which led to the overthrow of Mubarak don't interest me any more. Our piece begins with an introduction about those weeks, with their moments between defeat and success – but that wasn't the point. I didn't at all want to react to the revolution in the way it's been defined in the West. And that was the same for everyone involved in the piece. We decided to look for other ways of carrying the struggle forward, since we can no longer go on to the streets as we did before.

Is that the "lesson" you've drawn from the revolution which you refer to in the title of your piece?

Laila Soliman: The title "Lessons in Revolting" refers of course to what we have learnt and what the public could learn. "Revolting" is not only meant in the sense of revolution, but also in the sense of throwing up when you can't stand something any more. One can learn how to vomit. It's not about the romantic revolutionary metaphor of the raised fist, but about the relationship between revolution and vomit. That's more like what we've experienced.

You work with the film director Aida El Kashef, the choreographer Karima Mansour, the musicians Mustafa Said and Maurice Lourca, as well as with activists on the street. How did that come about?

Laila Soliman: They are people whom Ruud Gielens, with whom I did the piece, and I knew personally. I've worked with some of them in the past, and with the others I haven't. Our main criterion was that all the people should have somehow shared the moment of the revolution in the broadest sense. Apart from that, we had the idea that we would work with artists in various media.

How did it work out?

Laila Soliman: We said: bring material which is important for you, imagine impossible scenes which you would like to play. And then we put a piece together from that material. The collective method is more the way that Ruud Gielens works. 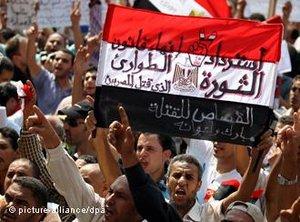 "I have hope. But my feelings say that real change will take years." - Egyptian protesters shout slogans and hold a placard reading 'End of emergency law, Friday of Reclaiming the Revolution', during a protest in Tahrir Square, 30 September 2011

​​It was a difficult process, because everyone had their own aesthetic and opinion. So we decided that all the artists except me would be on the stage. Of course, one can see the different standards of performance, but they are all very talented people in their own fields and that's why it worked.

The piece deals critically with the role of the army during the uprising, but also with its role afterwards.

Laila Soliman: The army is still the hero of 1967 and 1973 [the wars against Israel] and the people still have great respect for them, as if they were angels from heaven. People saw how they defended us demonstrators, but also how they infiltrated Tahrir Square with paid roughnecks. Now we find ourselves beaten up increasingly frequently, and we're no longer so sure whether we're all on the same side.

For ordinary people, the relationship with the military has only changed little by little. The army is trying to destroy the image of the demonstrators which the people have; they try to break the resolve of the protestors and the people; they arrest people, not just on demonstrations, but quite unexpectedly – in the subway, for instance. Those who are arrested are often tortured and brought before a military tribunal, while Mubarak and the other ministers go before civilian courts.

Have you suffered from censorship?

Laila Soliman: The censor's office doesn't work right now, because we have a transitional government and a transitional ministry of culture. So nobody knows what the rules are, or even who makes the rules. The army has its own censor, but they probably think that theatre isn't important. They are more worried about television, newspapers, bloggers and internet activists.

So far there have been three big taboos: religion, politics and sex. But in fact there are no firm rules. It's more a matter of political waves and the individual censor. Sometimes you had a conservative woman who thought that theatre should be something for all the family, and you weren't allowed to use words like "shit." In my work it's important that the language on the stage is close to the language of the street – in the choice of words, the rhythm, the way feelings and events are described – and that has often led to problems with the censor.

What role does art play in the revolution?

Laila Soliman: Street art is flourishing; many people are using their creativity to carry out their resistance against the media and the military. At the end of our piece, you see a dancer with plastic bags in camouflage colours on the streets of Cairo. That's the graffiti artist Ganzeer, who was filmed by the director Aida El Kashef. Both of them are stars on Twitter. When they were arrested, hundreds of people came immediately to support them, since they'd found out about them from Twitter and Facebook.

What is the most important thing for Egypt right now?

Laila Soliman: (thinks long and hard) The priority is a just legal system. Everything depends on that: the constitution, the police and how people are treated. The police also has to be completely reformed. Social injustice is already great enough in a country with such a small middle class. But it is really not the way it should be, to have all these men in uniform.

Do you think that something fundamental will change in Egypt?

Laila Soliman: It'll be a long struggle, in which it will be important to open the eyes of people, so that they don't forget their ambitious goals.

Welcome to the world of Al Qasar, where Arabic music collides head-on with punk and psychedelic to create something powerful and beautiful. "Who Are We" is a raucous, subversive ... END_OF_DOCUMENT_TOKEN_TO_BE_REPLACED

Egyptian authorities have Mada Masr in their sights once again after critical reporting. But the editor of the country's last independent news source is adamant they will continue ... END_OF_DOCUMENT_TOKEN_TO_BE_REPLACED

Like Christianity, Europe's history is one of migration. Both have strong roots in the Orient and in cultures thousands of years old. Cultural historian Bernhard Braun invites us ... END_OF_DOCUMENT_TOKEN_TO_BE_REPLACED

When she ascended the throne, millions of Muslims still lived under British rule. Later, Elizabeth II appealed for tolerance in a multi-religious society. She was the first ... END_OF_DOCUMENT_TOKEN_TO_BE_REPLACED

END_OF_DOCUMENT_TOKEN_TO_BE_REPLACED
Social media
and networks
Subscribe to our
newsletter