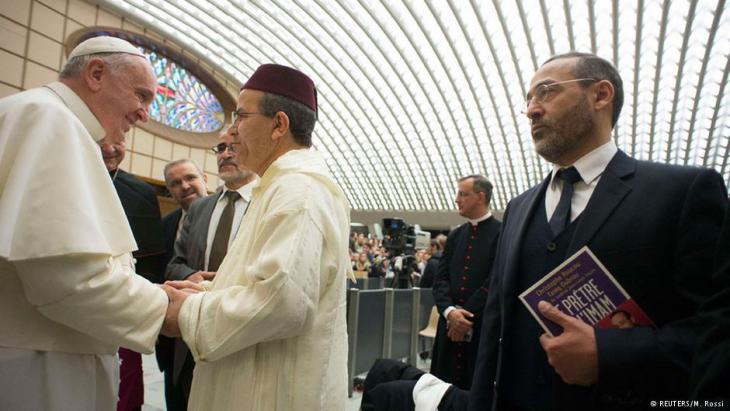 "Extremist groups want to impose on us a clash of civilisations"

The French imam and director of the Al Ghazali Institute at the Grand Mosque of Paris, Djelloul Seddiki, fears that the assassination of members of the "Charlie Hebdo" editorial staff could further poison the social climate in France and endanger peaceful co-existence. Interview by Yasser Abumuailek

Mr Seddiki, what consequences do you foresee for Muslims in France as a result of the terrorist attack on the satirical magazine "Charlie Hebdo"?

Djelloul Seddiki: I was visiting Pope Francis as part of a delegation of French imams when we received news of the terrorist attack on "Charlie Hebdo".

In my view, this attack is a catastrophe because it means that the conflicts in the Middle East have now reached France. Of course we had to expect this kind of development, but not in the form of such a brutal attack involving heavy weapons and killing so many journalists who are known for standing up for a free press and secularism in French society.

The attack is also a catastrophe because we – along with other minorities in France – already find ourselves in a difficult, agitated situation. I therefore fear that public opinion will now change dramatically, leading to an aggravation of the existing conflicts between the Muslim community and French majority society.

What specific conflicts are you talking about?

Seddiki: The Muslim community in France has for a long time had to deal with two conflicts: an internal one with radical, misguided young men and an external one resulting from the prevailing media discourse on Islam. As far as the imbalance in the media representation of Islam is concerned, we are tired of having to distance ourselves from criminal acts of violence in the name of Islam every single time. We are first and foremost French citizens – just like all other citizens of this republic – and therefore bear no responsibility for this deeply godless attack on the country's free press.

What can France's Muslim community do to correct this imbalance, as you put it?

Seddiki: We must first of all do everything in our power to overcome these negative reaction patterns. We need to move away from a situation where the media reflexively blames the Muslim community for the barbaric acts of individual perpetrators.

Tragically, most of those in the media overlook the fact that ordinary Muslims in France are the primary victims of jihadi terror. Worldwide too, 90 per cent of the victims of the various Islamist terrorist groups are Muslim: in Syria, in Iraq and in Lebanon. And let's not forget Pakistan, where the Taliban recently perpetrated a massacre on children.

Behind this cowardly attack on the magazine "Charlie Hebdo" are criminal, extremist groups that want to impose on us a clash of civilisations, a battle of cultures. Ultimately, regular Muslims have no influence on global political conflicts and on the geo-strategic state of the world. 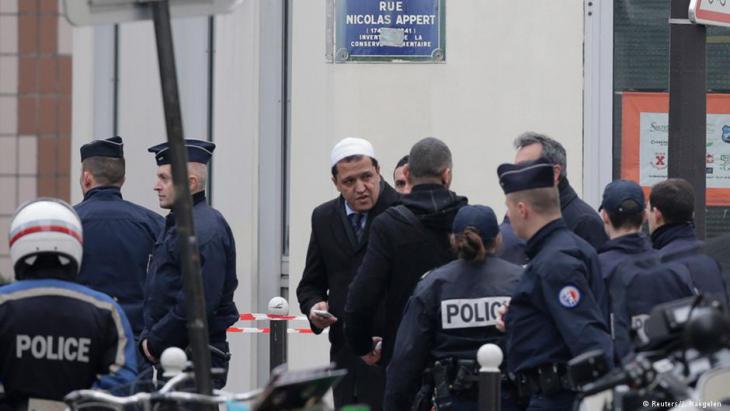 Imam Hassem Chalghoumi, imam of the Drancy mosque in the northern Parisian suburb of Seine-Saint-Denis (pictured here, centre) said after the Paris attacks: "I am extremely angry. These are criminals, barbarians. They have sold their soul to hell. This is not freedom. This is not Islam, and I hope the French will come out united at the end of this."

Nevertheless, these conflict-laden events contribute to the image of Islam as a "violent religion" becoming increasingly entrenched. What concrete action can Muslims take to correct this distorted picture?

Seddiki: That is unfortunately true. We definitely have to run more education campaigns, to encourage greater openness through education, and to step up our co-operation with civil society in all European countries.

The majority of French Muslims are members of the fourth generation; their mother tongue is French and they usually speak only rudimentary Arabic. At the moment, the majority of French Muslims live on the margins of society, but if we want to be part of this society, we must seek more integration. In this respect, we can certainly learn from the experiences of the Jewish community, because most French Jews are well integrated without having given up their cultural and religious identity.

How do you rate the work of Muslim associations in France in dealing with this complex situation in society?

Seddiki: Most Muslim associations in France were only founded in recent years and have only modest resources at their disposal. So we should not expect too much from them. They are currently doing what they can.

French society is a secular society through and through, which believes in the individual and not the collective. I am an advocate of a clear separation between the private/religious realm and the public sphere. In today's France, everyone can and should worship according to his or her own beliefs. We must therefore strengthen Muslims as individuals and accept their heterogeneity. Nowhere in the world do Muslims form a monolithic block.

Using a graphic novel to address a contentious issue like the Algerian war of independence may seem an odd choice, but new release "Algeriennes", translated into English by Ivanka ... END_OF_DOCUMENT_TOKEN_TO_BE_REPLACED

Although a unity government was formed in Libya in March 2021, tensions and possible crises between the political actors are already emerging. What problems does the country face ... END_OF_DOCUMENT_TOKEN_TO_BE_REPLACED

India hits record numbers of COVID-19 infections worldwide for the sixth day running, as health systems buckle under the pressure, and shortages of medical oxygen and hospital ... END_OF_DOCUMENT_TOKEN_TO_BE_REPLACED

On 7 March, Switzerland became the latest European country to vote in favour of a so-called "burka" ban. It was yet another feather in the cap of the right-wing populist Swiss ... END_OF_DOCUMENT_TOKEN_TO_BE_REPLACED

German Middle East analyst Guido Steinberg and television journalist Ulrich Tilgner have both published new books on the conflicts in the Middle East. Their analyses and their ... END_OF_DOCUMENT_TOKEN_TO_BE_REPLACED

In Grenoble, France, two professors have been pilloried in a dispute over the use – or otherwise – of the term Islamophobia. Is freedom of speech in jeopardy? By Stefan Dege and ... END_OF_DOCUMENT_TOKEN_TO_BE_REPLACED

Comments for this article: "Extremist groups want to impose on us a clash of civilisations"

Qantara is serving great efforts towards peace and coexistence in the globe. We appreciated your valuable and effective achievements since long time.I just like to share my point of view through your esteemed network that
West must avoid to hurt Muslims and disrespect Islam. Its very painful situation for Muslims community in the
globe. If West continue these things then no body stop Third World War on CLASH OF CIVILIZATION soon.
Muslims have long history of Peace, tolerance and brotherhood and Muslims can sacrifice their lives and every
thing on the name of Great Holy Prophet MUHAMMAD (PBUH).

END_OF_DOCUMENT_TOKEN_TO_BE_REPLACED
Social media
and networks
Subscribe to our
newsletter