Present-day Muslim immigration is returning Europe to its former historical state: the continent was a place of religious plurality from late antiquity on. Ralph Bollmann spoke to the historian Michael Borgolte about the history of Muslims in Europe

Michael Borgolte: "Medieval history shows us that a modus vivendi between Christian and Muslim political systems is possible."

​​Michael Borgolte, there has been a wave of controversial discussions in Europe about Islam and building new mosques. How do you see this development as an expert on the Middle Ages?

Michael Borgolte: I'm rather glad about it. Medieval history has always been more interested in religious issues than modern history. Traditionally, we've been very much restricted to Catholic Christianity, but that's changing now. Through this contemporary interest, historians are beginning to take an interest in Islam.

In your book on Christians, Jews, and Muslims in Medieval Europe you describe the Middle Ages as a time when Christianity, Islam and Judaism spread simultaneously. Was Europe more diverse then than now?

Borgolte: It was at least equally diverse. Although Christianity did have the strongest effect on European culture, Judaism and Islam were also very influential.

So Islam was more than a disruptive element?

Borgolte: It was always part of European culture. It was a challenge, by all means, as it initially emerged as a conquering religion. But Muslims then settled in various parts of the continent and had a decisive influence over the transfer of knowledge from ancient Greece, Rome and the East.

In the Middle Ages Spain and Sicily were Muslim, then in modern times the Balkans. Does that mean a Europe without Islam as a power factor – as we've experienced it since World War I – is an exception?

Borgolte: The normal state is religious pluralism. Since the end of late antiquity, there were always several cultures at the same time based on religious foundations in medieval Europe. The return of Islam to Europe, this time through peaceful immigration, is bringing the continent back to this normal state.

Why has this been forgotten for so long?

Borgolte: Because the advance of Islam is associated with traumatic experiences. The fall of Constantinople or the siege of Vienna left deep scars on the European consciousness, as did the early threat in the 8th century.

Can the conflict be seen as a religious one at such an early date? 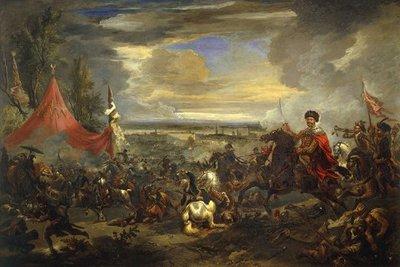 "The advance of Islam is associated with traumatic experiences." Painting of the Great Turkish War of 1683 by Dutch baroque painter Jan Wyck (1698)

​​ Borgolte: The Muslim invasion was certainly felt to be a loss of freedom in Spain. But it was the French crusaders who brought the idea of religious conflict there in the 11th century. It was not prominent initially, especially as the Christians remained free to practice their religion.

So for the Visigoths in Spain, it would have been no different if the conquerors had been Frankish Christians?

Borgolte:To overstate the point slightly: that's right. Even though the Visigoths were still Arianists at that point, whereas the Franks had been Catholics for some time. My impression is even that Christian heretics were combated more strongly than Muslims and Jews. Those who fell away from their own belief were regarded as deserving death, whereas there were mechanisms for toleration between Jews, Christian and Muslims. With Christianity alone, it would have been impossible to develop tolerance in Europe. It was granted that others could not know any better due to a lack of religious understanding. Profession of one's own faith, however, was seen as irreversible.

When did this religious tolerance come to an end? 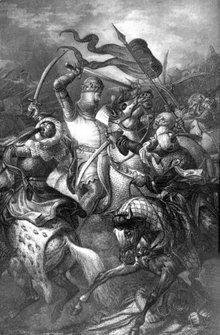 Deep-seated hate: One consequence of the medieval crusades was an increase in conflicts between the three monotheist religions in Europe -
Richard Lionheart in the battle of Arsuf fighting Sultan Saladin (19th century engraving by Gustave Doré)

​​ Borgolte: The relationship between the three monotheistic faiths was always ambivalent. The conflicts were intensified with the crusades; the persecution of Jews and Muslims then never let up until the end of the medieval period. In the High Middle Ages centralising states emerged in western Europe, a process seemingly threatened by any religious deviation. That was different in an established centralised state such as Byzantium. There, people of other faiths could be tolerated in the provinces as long as they were not in capital city.

So religious fundamentalism is a phenomenon of relatively developed societies?

Borgolte: If you define developed societies as those with highly dense states, yes. Where people lived decentrally in the Early Middle Ages and communication was weak, there were no radical phenomena of that kind.

You claim there is a link between monotheism and monarchic forms of state. But there were monarchies in polytheist antiquity and later even republics, at least in the Late Middle Ages.

Borgolte: Islam, for example, did not form any political theory. The Caliph in Baghdad was regarded as the spiritual and worldly head, but he never exercised exclusive political rule. There is no comparison with the monarchic authority in the West.

But that would mean that the link between politics and religion was closer in Christianity than in Islam?

Borgolte: Not at all. The Christian monarchs distinguished from the very beginning between the power of the bishop and the power of the king. That allowed the rulers certain freedoms that those in the Islamic world did not have in principle – although in practice, Muslim rulers often laid claims to freedoms of this type.

You write that the political class in Andalusia distanced itself relatively strongly from the Caliphate. In the German Prince-Bishoprics, in contrast, could there be no question of dividing the church and the state, by their very nature? 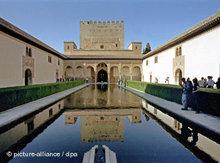 Spirit of tolerance: in Al-Andalus, Muslims, Christians and Sephardic Jews lived in relative harmony, with a free exchange of ideas across the boundaries of religion

​​ Borgolte: There was in fact a process of political fanning out in Andalusia. But unlike in the West, these phenomena were not permeated by theory or officially sanctioned. It was not until Atatürk that the Caliphate was abolished in a programmatic manner.

So the relationship between politics and religion is not laid down by culture, it can develop differently?

Borgolte: There is a great deal of discussion about modernising Islam at the moment, as a kind of late Enlightenment. I don't think it's wise to follow that path. The principle contradictions between Christian and Muslim political systems have to be acknowledged. But medieval history shows us that a modus vivendi is possible.

In the Middle Ages the majority of Jews lived in areas under Muslim influence. Is Islamic anti-Semitism a 20th century phenomenon?

Borgolte: Anti-Semitism is the wrong term here, because there was no racist component. There was certainly anti-Judaism. The phenomenon emerged in Muslim Spain in the 11th century, when Jews took on high posts in the administration – which violated the Qur'anic regulation that non-Muslims should not rule over Muslims. But on the whole, the Jews were closer to the Muslims than to the Christians.

Why was Christian anti-Judaism more prevalent?

Borgolte: Again, there was a strong tradition of willingness to tolerate other religions among Christians. The Jews were seen as the keepers of the Old Testament. During the anti-Jewish pogroms on the Middle Rhine, it was the bishops who tried to protect the Jews from the Christian mob. The two phenomena – persecution and protection of Jews – existed alongside each other from the 12th century on. The church never abandoned its basic position that it was wrong to kill Jews.

There was even a short-lived Jewish state north of the Black Sea under the Khazars. How did this come about?

Borgolte: To avoid being absorbed by the neighbouring states, the Khazar leaders deliberately converted to a different religion. But the majority of the population remained Muslim or Christian. There's a wonderful 10th century letter from a Jewish politician in Spain to the prince of the Khazars. The politician is fascinated by the fact that the Jews now finally have their own state again – almost a thousand years after it was destroyed by the Romans.

Michael Borgolte is a professor of medieval history at the Humboldt-Universität zu Berlin and chair of the Institute for Comparative History of Medieval Europe. His most recent publication is the book Christen, Juden, Muselmanen: die Erben der Antike und der Aufstieg des Abendlandes (Siedler-Verlag 2006).

The West and Islam
1,001 Prejudices
People to the south and north of the Mediterranean attribute negative characteristics to one another. In this essay, Hassan Hanafi, professor of philosophy at the University of Cairo, contributes a few thought-provoking ideas

The Arab Jews
Language, Poetry, and Singularity
A joint Arab-Jewish identity seems an impossibility given the current political situation in the Middle East. And yet it was a reality, exemplified by Arabic-speaking Jews and their writers. In his extensive essay Reuven Snir investigates the complex history of Arab Jews

END_OF_DOCUMENT_TOKEN_TO_BE_REPLACED
Social media
and networks
Subscribe to our
newsletter