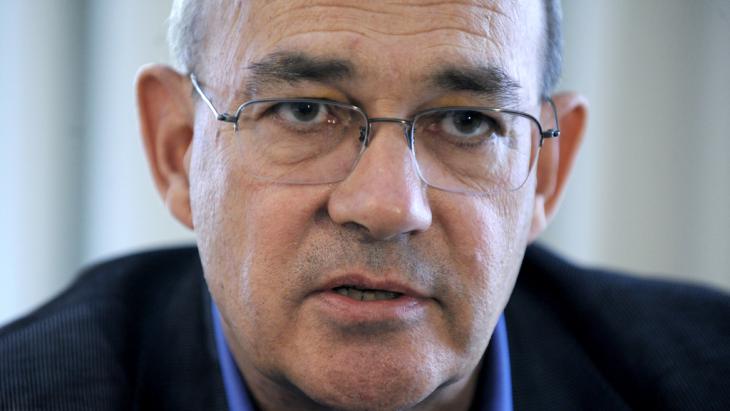 ″United Jerusalem is a myth″

In interview with Inge Günther, the prominent Israeli historian and journalist Tom Segev talks about life in the city where peace is impossible

You were born in Jerusalem and have lived most of your life here. What makes the city for you?

Segev: I used to like Jerusalem much better; it′s actually become a pretty unbearable city. There′s a line through Jerusalem made up of fear, hatred and national difference, dividing the city. Many young Israelis move away to Tel Aviv or elsewhere. Many Jewish nationalists demonstratively live in Arab areas. The city is getting more and more religious. You are constantly expected to adopt a position on the conflict.

Prime Minister Benjamin Netanyahu has even spoken of revoking Palestinians′ residence permits. He is apparently considering ejecting entire Arab neighbourhoods with the idea that they re-group somewhere outside the city.

Segev: Netanyahu tends to say things that aren′t true. In this instance his proposal is simply unconstitutional. The law would first have to be changed to revoke Arabs′ right to live in Jerusalem. That simply can′t be done. But his idea does show that the ″United Jerusalem″ people so like to celebrate is a national myth.

There′s now talk of a third intifada. But did it not start after the failure of John Kerry′s peace initiative back in April 2014? Since then, violence has flared up repeatedly, with nationalist-motivated murders and attacks such as the knifings we are currently seeing.

Segev: Whether it′s a third intifada, I don′t know. The knife attacks aren′t originating from one particular organisation. Anyone can pick up a knife and go out. Some of these knife attackers have acted out of desperation or religious fanaticism, which exists on our side too. God doesn′t play a good role in this conflict. The violence simply flares up now and again. 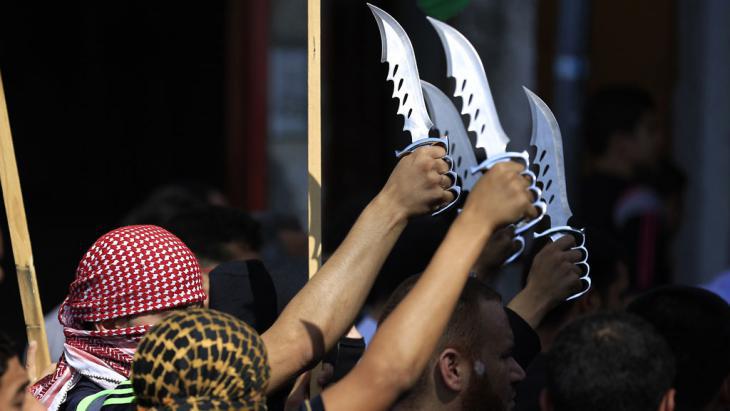 Do the current knifings herald a renewed intifada? Since the beginning of October ten Israelis and more than 70 Palestinians have been killed in knife attacks carried out by Palestinian assailants. Most of the Palestinians who have died were attackers shot by Israeli security forces or civilians. The remainder were killed during uprisings in the West Bank, East Jerusalem and on the border with Gaza

But it′s not in the nature of things. The current outbreak has to do with the fact that Palestinians don′t have equal rights in this country.

Segev: Right. But it′s still a conflict that has been going on a very long time. It′s all about fifty years of systematic violation of Palestinians′ human rights, during which more and more Israeli settlers have moved into the Palestinian territories. Take the Temple Mount, for example: since 1967, after the Six-Day War ended, Israel has tried to manage the ongoing struggle over this location. Occasionally the situation has flared up. Now it′s happened again, because of unnecessary provocation by religious-nationalist settlers who go onto the Temple Mount to pray. Even if we avoid that, the Israeli-Palestinian conflict remains unsolved, but at least it would be better managed.

Surveillance cameras on the site of the al Aqsa mosque, revered by Jews as the Temple Mount, are now supposed to help moderate the situation. Is that enough? Some Israeli government members are still in favour of people visiting – including those wishing to pray – the Temple Mount, Islam′s third holiest site. Prime Minister Netanyahu has called them off. But he only has them under control to a certain extent. And Palestinian forces are also fuelling the conflict to put pressure on Israel.

Segev: There are fanatics on both sides. In Israel you could almost say that Netanyahu is the left wing of the government. Politics in this country have pretty much always been determined by extremists. In times of peace, life in Jerusalem can be good. Jews and Arabs work together in the hospitals. There are hardly any pharmacies without Arabs working in them. You go there and you can be deluded into thinking that coexistence is working. But then it always explodes at some point. 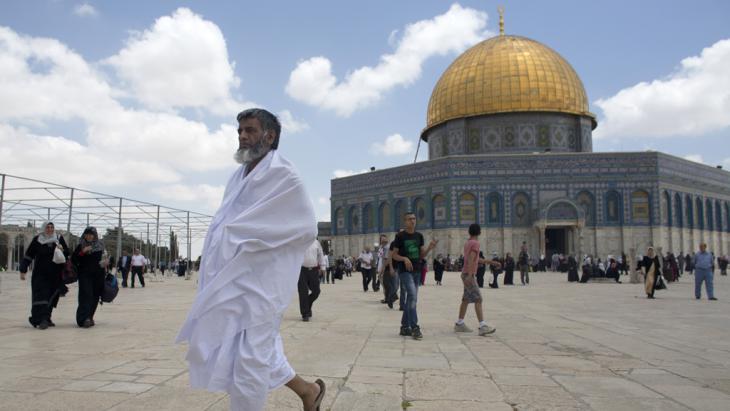 Temple Mount and the al-Aqsa mosque at the heart of the conflict: in recent weeks, Temple Mount, venerated by Muslims as the ″noble sanctuary ″, has been the focus of an upsurge in violence in Jerusalem, the Palestinian territories and Israel. Since 1 October nine Israelis have been killed in dozens of Palestinian attacks

Did the violence not break out partly because there is no diplomatic solution on the horizon, no prospects for improvement?

Segev: The peace process was never a true peace process. Although Netanyahu claimed he was in favour of a two-state solution at one point, he never actually meant it. I honestly don′t know what he′s in favour of. Perhaps all he cares about is how long he′ll stay in government. Fifty years ago I′d have said we′d have peace by 2015. Now I don′t think a peace treaty is possible.

Because the necessary willingness for compromise is lacking?

Segev: Yes, on both sides. This conflict isn′t just about land and water and security. It′s about identity, because both nations rely on the same land to define themselves. So we′d need to compromise our own identity, which isn′t even clearly delineated. We argue constantly about who is a Jew, who is Israeli. And the Palestinians are divided along Fatah and Hamas lines. We don′t have clear identities – that′s what′s makes it so hard to reach a compromise. On top of that, there′s no majority in Israel for evacuating the settlements in the West Bank.

That makes a two-state solution increasingly impossible. Is the only remaining option a bi-national state in which things are run as they are in Jerusalem?

Segev: Naturally I′m afraid of a bi-national state, especially because it probably wouldn′t be democratic. The situation in the Arab parts of Jerusalem is even worse than that of the poorest Jews here. These differences have been perpetuated for almost fifty years – out of stupidity, I think. If we had wanted a united city, we should have aligned standards of living between the west and eastern sectors, purely in the national interest. In historical terms, I consider the conquest of East Jerusalem in 1967 the biggest mistake. Because the annexation meant there can actually be no peace. We can′t give East Jerusalem back and the Palestinians can never accept that. 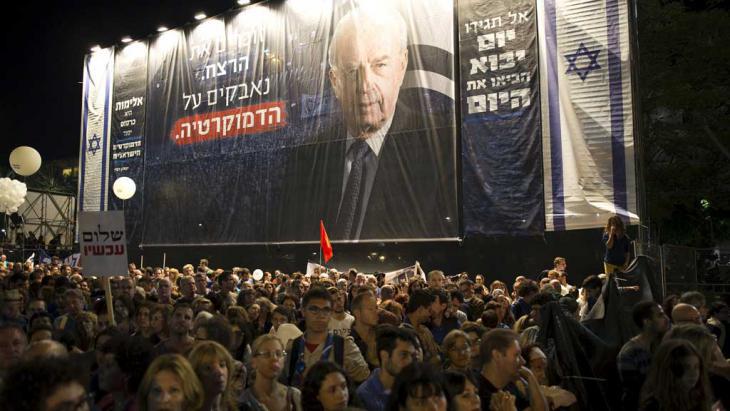 ″There′s a great desire for leader personalities like Rabin″: at the beginning of November, some 100,000 people gathered on the square in Tel Aviv where Rabin was assassinated by a Jewish right-wing extremist on 4 November 1995. In their eyes Rabin was a champion of the peace process – confirmed by the award of a Noble Prize for his role in the Oslo Accords. The square was subsequently renamed in honour of the murdered politician

Are you one of those commentators who think everything would have been different if Yitzhak Rabin had survived the assassination attempt twenty years ago?

Segev: That′s something we can never know. He was murdered before it was clear where the Oslo peace accords would lead. I think the assassination didn′t create the current situation, it reflected it. We′re a divided society. The assassination was an expression of those internal conflicts.

Why have the religious-nationalist forces only got stronger since then?

Segev: Because the Israelis, including left-wingers, no longer believe in peace with the Palestinians. Our society has drifted very far to the right. The greatest threat for Israel is not the knife intifada, not even Iran. I′m afraid for our internal democracy. It has never been as weak as it is now. The first, genuine attempt to create the new Jew has failed. So people feel all the more tied to the Jewish religion. It′s the search for intellectual content that secular Israel is no longer in a position to offer. But there′s a great desire for leader personalities like Rabin and David Ben-Gurion. The explanation for that is Benjamin Netanyahu.

Tom Segev is one of Israel′s leading ″New Historians″. His numerous books take a critical look at the Zionist movement, the Six-Day War and the integration of the Holocaust into national memorial policy. His works have won a number of awards and been translated into many languages. He was also a longstanding columnist for the ″Haaretz″ newspaper.

Segev was born Jerusalem in 1945, shortly before the end of World War II. His parents had emigrated from Nazi Germany to Palestine under the British mandate in 1933.

In an act of subversive diplomacy, Israeli singer and actress Liraz Charhi has recorded her latest album in secret collaboration with Iranian artists. By Carl Holm END_OF_DOCUMENT_TOKEN_TO_BE_REPLACED

A German IT company has started an academy to train Palestinians in software development. Despite the pandemic's challenges, it has managed to run its first boot camp in Ramallah ... END_OF_DOCUMENT_TOKEN_TO_BE_REPLACED

This summer it was reported that Israel had abandoned its plan to annex parts of the occupied West Bank. Now, however, Israel is driving forward its settlement programme in the ... END_OF_DOCUMENT_TOKEN_TO_BE_REPLACED

Conceived by Israeli journalist and rabbi Elhanan Miller, "People of the Book" is a YouTube project designed to provide information on Judaism in Arabic. Disarming prejudice with ... END_OF_DOCUMENT_TOKEN_TO_BE_REPLACED

END_OF_DOCUMENT_TOKEN_TO_BE_REPLACED
Social media
and networks
Subscribe to our
newsletter