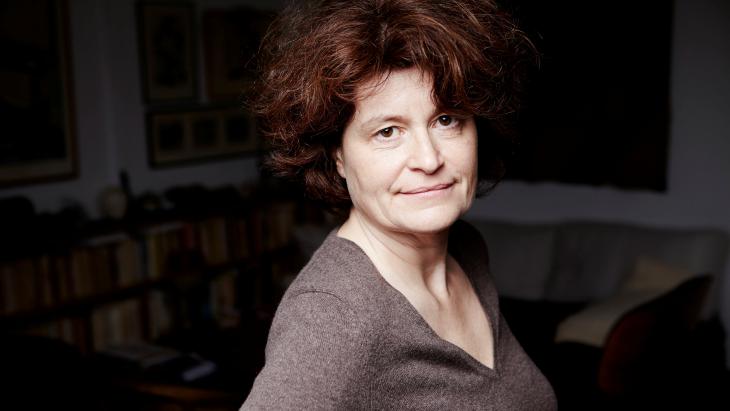 In her book ″Codename Caesar. Im Herzen der syrischen Todesmaschinerie″ (Codename Caesar. At the heart of the Syrian death machine), Garance le Caisne reveals Bashar al-Assad′s system of torture and the efforts of ″Caesar″ the photographer to put an end to the murder. Interview by Ruth Renee Reif

At the start of 2014, thousands of photos of Syrian torture victims appeared on the Internet. They had been taken by a photographer working for the Syrian military police. In 2011, when the protests against Bashar Al Assad′s dictatorship began in Syria, he was tasked with photographing the corpses of oppositionists who had been tortured to death. He was so horrified by what he saw that decided to copy the photos in secret and get them out of the country. In 2013, he fled from Syria and went into hiding using the alias "Caesar". Garance Le Caisne tracked him down and spoke to him.

Madame Le Caisne, the man known by the codename "Caesar" worked as a military police photographer, documenting Bashar al-Assad′s crimes against his people. The pictures were smuggled out of the country. Their authenticity was confirmed and they were displayed to the world. You met Caesar. How is he doing?

Garance Le Caisne: Caesar is disappointed by the international community′s inaction. He is wondering why he put his own life and those of his loved ones at risk and caused them so much fear. But deep down, he knows that this was the only course of action he could have taken. Maybe his ideas about world politics and international justice were too naive. He thought that if he showed these photos and people saw the criminality of Syria′s regime, Assad would be toppled immediately. And actually we in the West also find it disconcerting that the perpetrators haven′t been prosecuted. Caesar sometimes even fears that the western governments will resume contact with Assad, because they consider the fight against the terrorist organisation "IS" to be more important than the crimes of the regime.

The Syrian writer Samar Yazbek describes the West′s talk of combatting "IS" as hypocrisy. She says the bloodshed unleashed by Assad against his own people is a failure of the world′s conscience... 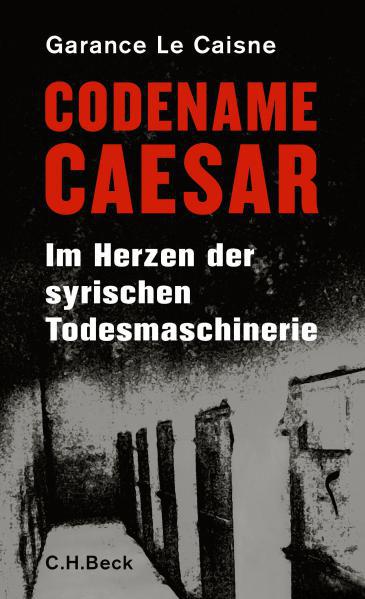 le Caisne: "What is happening in Syria is not just a Syrian affair. The oppression of the Syrian people by the Assad regime also concerns us in the West. "IS" draws its power from the dictatorship′s oppression"

le Caisne: It′s a great failure for humanity. What is happening in Syria is not just a Syrian affair. The oppression of the Syrian people by the Assad regime also concerns us in the West. "IS" draws its power from the dictatorship′s oppression. It came into being in Iraq in 2003 after the American invasion and the Iraqi regime′s marginalisation of the Sunnis. And it′s just the same in Syria. "IS" draws its power from the oppression of a certain section of the population.

How are we to explain the fact that the international community has turned a blind eye to what is happening in Syria to such a degree?

le Caisne: It′s even worse than that. The UN acknowledged this crime as such. It issued a report on the systematic torture in Syrian prisons and thus confirmed that torture and murder was taking place, independently of Caesar′s photos. But the international community doesn′t want to act on it. They see intervention as too complicated for them. Syria is a sovereign state and Assad an elected president. Even if he wasn′t elected democratically, he is recognised as having been elected. And then there′s the fact that he and his wife look like us. His wife is very beautiful. She doesn′t wear a veil and they both appear "civilised". So it′s much more difficult to see the barbarism there than it is with the members of "IS", who post their crimes on social media for all to see.

You say that Barack Obama wasn′t prepared to take Caesar in. And yet Middle East experts apportion some of the blame for events in Syria to him...

le Caisne: I wouldn′t say that Obama is to blame. The responsibility lies with the Syrian regime. But Obama did make a mistake when he didn′t intervene in August 2013, after the poison gas attack. The reason was that he had just been elected by the American people on a promise that he was going to end American interventions in the Middle East. But it had disastrous consequences. In September, "IS" had already carried out their first big recruitment drive. The organisation was selling itself as the sole defender of Muslims. Nobody in the world was prepared to help the Muslims who were being attacked by the regime, they said. Only "IS" was defending Muslims. And that′s how they managed to win over a large number of fighters and followers.

Putin is even supporting Assad. What are Russia′s interests in Syria?

le Caisne: Russia has a naval base in Tartus. That′s why it has intervened militarily. It needs this base because it can′t reach the Mediterranean from its own territory. Plus, for a long time Syria was one of the main customers for Russian arms. And finally, Syria is important to Russia as a way to show the world that it′s a superpower and other states can′t cut it out of international decisions. Russia is in the middle of an economic crisis and Syria serves as a distraction from internal problems.

What do you think of the frequently raised argument that Assad′s fall would put Syria in danger of falling apart and we would be faced with a similar situation to the one in Libya?

le Caisne: This argument first came up after the 2011 revolution. It′s an attempt to save Assad. But it isn′t a legitimate argument. Syria has already fallen apart. The old Syria doesn′t exist any more. Part of the country is controlled by representatives of the regime, part by Islamists, another part by Kurds and a small part by moderate armed rebels. Though they are gradually vanishing from Syria. "IS" and the regime have both set their sights on them. And the majority of Russian strikes are aimed at them as well.

You quote a founding member of the Syrian National Movement as saying that "The world has lumped the real revolutionaries in with the jihadists". Is that what Assad wanted to achieve?

le Caisne: Yes, Assad wanted the demonstrators to be viewed as terrorists. That′s why he freed jihadists from prison in 2011. Syrians who had fought against the US army in Iraq were thrown in jail by Assad when they returned to Syria. When the revolution broke out, Assad released them. They filled the ranks of the al-Nusra Front. This group is linked with al-Qaeda and also sympathises with "IS". It was a way for Assad to show that the alternative to him could only be chaos. And so he demanded that people support him and not the revolutionaries. At certain points, this policy has worked. But eventually people will realise that the revolutionaries aren′t terrorists.

There are actually voices from the Arab world who insist that the revolution will succeed, even if it doesn′t look that way in Syria right now. What′s your assessment of the situation?

le Caisne: You can′t govern against the will of the people on a permanent basis. The Syrians are no exception to this. When more demonstrations took place in Aleppo, Idlib and elsewhere at the beginning of March, they showed that the Syrians still have this desire for political change, for democracy and freedom. Many are prepared to die for it. One day democracy will win out. But the price is high. This victory will have cost many thousands of lives and many bloody battles. 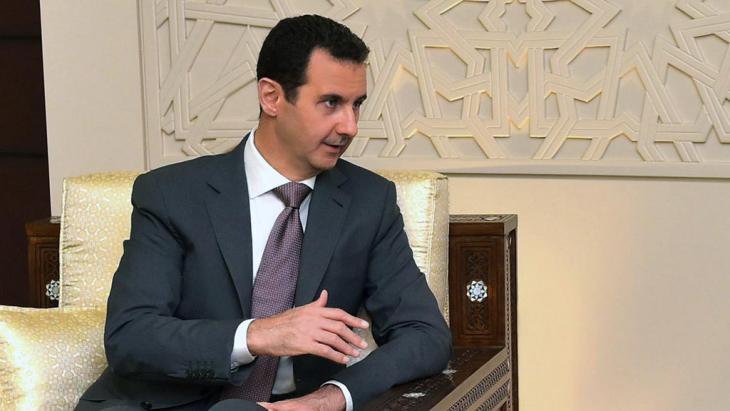 Waging war on his own people: UN investigators formally accused President Bashar al-Assad′s government of crimes against humanity in February 2016. The commmitte declared that, over the past four years, thousands of detainees have died while under arrest. Assad is seeking to destroy the civilian population. The experts also accused the jihadist militias IS and the Nusra Front of war crimes, citing proof of executions and the torture of prisoners

Syria has now been destroyed to such an extent that it′s impossible to imagine how the country can be inhabited again. You′ve travelled to Syria many times. What′s your impression?

le Caisne: When you go there as a journalist, you only get to go to certain areas. So you have to take care when you look at the photos you see from Syria. The terrible images from the city of Homs, for instance, that did the rounds in the second week of March, only showed the parts of the city that had been destroyed. The whole of Homs hasn′t been destroyed. But even if Syria lies in ruins, it can be rebuilt. What is far worse is the regime′s desire to destroy the mix of faiths. Around half the population are no longer living in their houses. Millions of Syrians have become refugees. Between three and four million have left the country. As many again have become displaced within Syria. Houses can be rebuilt. But when the relationships within families, between neighbours or the inhabitants of a district have been destroyed, I don′t know what hope can be left.

What steps must the West take to achieve a normalisation of the situation in Syria?

le Caisne: Above all, the crimes of the regime must be brought to trial. There is a great need among Syrians for the criminals to be taken to court. It isn′t possible to sentence all the perpetrators, but charges must be brought against those who are symbolic of the regime. That would also be a clear signal to anyone else who might feel the urge to commit crimes of this sort in the future. Then the guns must fall silent, so that the Syrians no longer need to flee. And it must be made clear that Assad and the higher ranks of the regime will have no part in any political solutions. They are responsible for mass crimes and you can′t go back to business as usual with criminals.

Garance le Caisne is a French journalist. She writes for "Le Journal du Dimanche" and  "L′Obs" and has been reporting on the Middle East since 1990. She has travelled to Syria several times since it has been ravaged by civil war.

Very different Western reactions to the suffering in Ukraine and the Arab world show that there is a profound rift among cultures. Essay by Michael Young END_OF_DOCUMENT_TOKEN_TO_BE_REPLACED

United Arab Emirates strongman Sheikh Mohammed bin Zayed al-Nahyan, who was formally elected president on 14 May, has led a realignment of the Middle East, creating a new anti- ... END_OF_DOCUMENT_TOKEN_TO_BE_REPLACED

Middle Eastern countries are still on the fence when it comes to the Russian invasion of Ukraine. Their citizens point to the West's double standards surrounding conflict and ... END_OF_DOCUMENT_TOKEN_TO_BE_REPLACED

For over fifty years, British photographer Peter Sanders travelled across the Middle East and further afield, seeking out the saints of Islam. His work uncovers a little-known ... END_OF_DOCUMENT_TOKEN_TO_BE_REPLACED

END_OF_DOCUMENT_TOKEN_TO_BE_REPLACED
Social media
and networks
Subscribe to our
newsletter