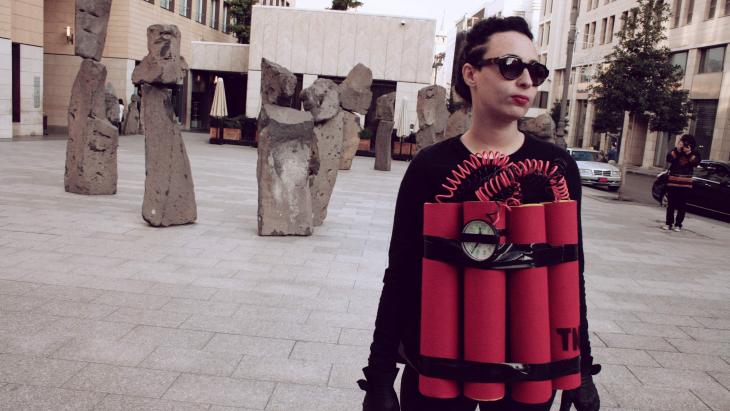 Interview with the Lebanese activist Rima Najdi
Provocation for peace

Dressed as a suicide bomber with a fake explosive belt, "Madame Bomba" roamed the streets of Beirut ... Her aim in doing so was to provoke a reaction in those that saw her and to protest against the on-going violence in Lebanon. But who is "Madame Bomba"? Juliane Metzker spoke to Rima Najdi, the Lebanese activist behind the provocative performance

Ms Najdi, you work in Berlin, but visited your friends and family in Beirut for the Christmas holidays. What was your experience of the situation in Lebanon?

Rima Najdi: As soon as I arrived in Beirut, I found the whole atmosphere quite depressing. Furthermore, my friends didn't seem to be very happy. Most Lebanese people want to leave the country. This is not just because of the increasing violence, but also because of the living conditions: the economic crisis, high living expenses, electricity and water problems, to name but a few. On top of this highly tense atmosphere, there is the violence. During my stay, two bombs exploded in just one week.

On 27 December, the former finance minister Mohammed Schatah was assassinated in a car bomb attack in downtown Beirut. On 2 January, another explosion rocked a southern suburb of the Lebanese capital. Civilians were killed in both incidents. How did you react to the bombings?

Najdi: I think I heard the explosion in downtown Beirut, but it didn't have such a big impact on me because this is not the first time I have been close to an explosion. I am traumatised by sounds – if I hear fireworks, I become very tense.

In the seconds after a bomb explodes, you are unable to talk to anyone. You can be driving a car or sitting in a coffee shop, but in those moments after an explosion, although the world around you keeps moving, your world has stopped. You start to think: you could have been there by accident and among the victims. You become afraid: where are your parents and friends? You call your loved ones. After an explosion, the telephone network usually collapses in Lebanon. 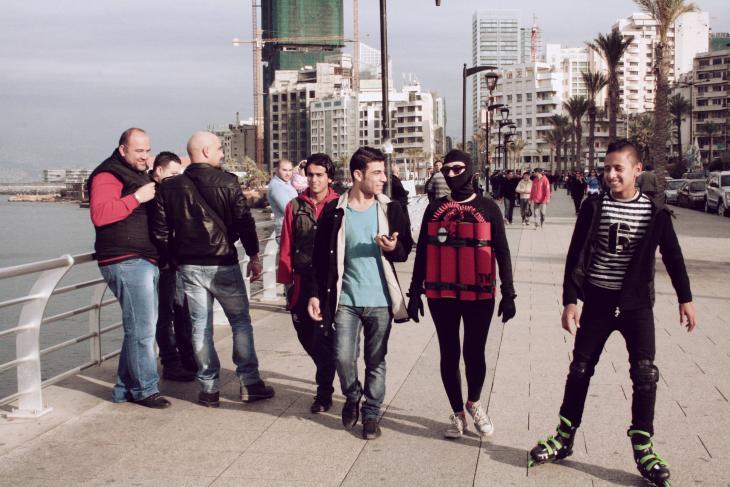 A walking time bomb on the Corniche: "I don't believe that just talking about the bombings will resolve any problems. I felt the amount of indifference in Beirut and I believe that we are somehow turning into bombs ourselves, not knowing when we will explode," says Rima Najdi

Did this experience motivate you to take action?

Najdi: Not directly. I come to Lebanon every six months. This time, I felt more disconnected from Lebanese society than ever before. I think this feeling of disconnection protected me. But by the time of the second explosion, I just couldn't remain calm anymore.

So you called yourself "Madame Bomba", wrapped a fake TNT bomb around your waist and roamed the streets of Beirut. What did you hope to achieve by doing so?

Najdi: My friends encouraged me to do this performance. Actually I didn't want to look like a suicide bomber; I was planning to dress up as the actual bomb. However, I think that the costume led to a differentiated communication and interaction with the people on the streets.

I wanted to do more than just raise awareness. The aim of the project was to provoke reactions. I don't believe that just talking about the bombings will resolve any problems. I felt the amount of indifference in Beirut and I believe that we are somehow turning into bombs ourselves, not knowing when we will explode. My intervention affects many layers.

How did you organise the performance?

Najdi: A few friends came with me so I wasn't alone on the street. That helped a lot. By the same token, I didn't want to be surrounded by a lot of familiar faces either because that wouldn't have made the intervention as open for the public.

First we drove through downtown Beirut; I walked the promenade – the so called "Corniche" – from Ain Mreisseh to Manara, the lighthouse. There I was able to interact a lot with people passing by. However, in other places where we just stopped for a few minutes, people ignored me and my costume. In Hamra, I sat down outside a coffee shop so that people would see me.

It took a few seconds for the people to understand what was going on. Initially, they stared from a distance. Then they came closer and took pictures. One man sent his child to have his photo taken with me. The little boy asked me bluntly: "This is fake, right? How many kilos is it and why are you wearing this?" I decided before the performance that I would only respond to questions by asking more questions. I wanted to mirror people's questions so they could figure out the answers on their own. 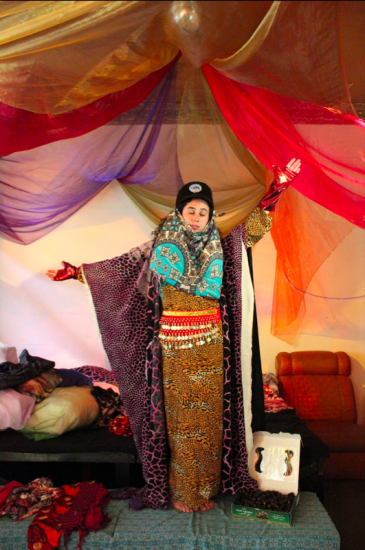 Making audiences think: in her performance "Dress ME how YOU like" in Berlin, Rima Najdi invited audience members to dress her up in Oriental style clothes and scarves. The aim was to draw attention to the prevailing stereotype about Arab women in the West

Were you not afraid of getting into trouble with the police?

Najdi: The municipal police wanted to have their photos taken with me as well; they were making jokes about my intervention. I passed one policeman who said: "I can set you on fire and ... boom!" Private security men wouldn't allow me to enter private property like Zaitunay Bey.

The Beirut-based blogger Marina Chamma has argued that the formation of a critical mass in Lebanon is being blocked by the fact that a lot of activists live outside the country, like you do. Do you consider this to be a problem?

Najdi: Yes, I also consider this to be a problem. To a certain extent, I think my performance was problematic because here I am privileged, going to Lebanon for a visit, but I have already emigrated from the country; I did the performance and the next day, I flew back to Berlin.

On the other hand, there is a lot of activism on social media and very few initiatives are taking action. The dialogue and statements on the Internet are very good and necessary, but the question is how to step out of this virtual frame? If you are not acting physically on the streets, then you start to negotiate different aspects. But I don't want to judge because I am not living there.

I can't represent people the people of Lebanon. I am receiving lots of messages saying that I must have been very brave to walk Beirut carrying fake TNT bombs. But I think the bravest people are the people who live in Lebanon.

Lebanon and Sri Lanka may be a world apart, but they share a history of political turmoil and violence that has led to the collapse of once-prosperous economies bedevilled by ... END_OF_DOCUMENT_TOKEN_TO_BE_REPLACED

With regard to gender justice, things look bleak in the Arab world. Laws typically discriminate against women, while national legislation all too often does not comply with the ... END_OF_DOCUMENT_TOKEN_TO_BE_REPLACED

When times are tough, the exchange of ideas and perspectives becomes especially important. It takes dialogue. And at Deutsche Welle, we need distributors and cooperative partners ... END_OF_DOCUMENT_TOKEN_TO_BE_REPLACED

As the Lebanese economy has collapsed, so has the country's health system. Many medicines have become scarce or unaffordable. Confronted with a failing state, the Lebanese are ... END_OF_DOCUMENT_TOKEN_TO_BE_REPLACED

END_OF_DOCUMENT_TOKEN_TO_BE_REPLACED
Social media
and networks
Subscribe to our
newsletter