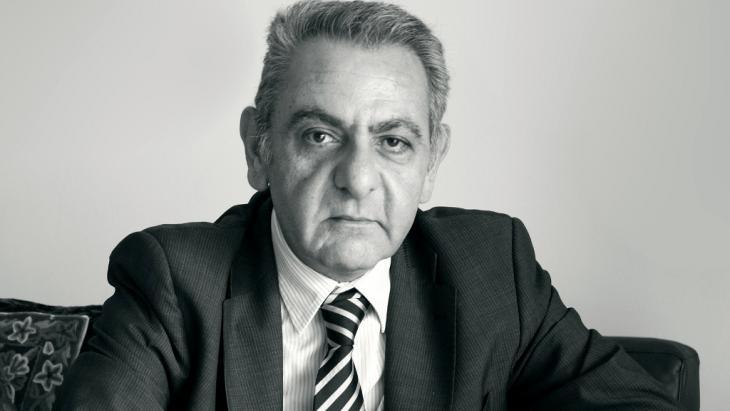 Rather than acting as a counterweight to the ruling class, the press across the Arab world serves the interests of oligarchs, despots and governments, says Hazem Saghieh. In interview with Kai Schnier, the Lebanese author and journalist explains why he censors himself and why he believes that journalism from Rabat to Riyadh will never be a catalyst for political change

Mr. Saghieh, you worked with the Lebanese newspaper As-Safir for many years. Then in 1988, you moved to London and became an editor for the pan-Arab newspaper Al-Hayat. How does the work as a journalist differ between Lebanon and England?

Hazem Saghieh: There is no comparison between journalism in the Arab World and journalism in America or Europe. In London, people produce independent content, here in the Middle East the media are the lapdogs of those in charge. Journalists in London are free, the journalists in Beirut are not. That necessarily has an impact on their work.

Still, we are sitting in a cafe in the centre of Beirut, having an open conversation …

Saghieh: Sure, but only as long as Hezbollah allows us to. At the moment, the party is firmly in charge and its authority is not being questioned, so there is no need to crack down on the press. Don′t be fooled, though. Beirut is regarded as a hub for independent journalism within the Arab World, but even here the freedom of the press could be taken away at any time, were the people in charge to deem it necessary. And that certainty is a form of repression in itself.

To what extent do you feel this repression in your own work as a journalist?

Saghieh: I have been working for Arabic-language newspapers for forty years now. I don′t feel the repression anymore, it′s become part of who I am. During my time with As-Safir, the newspaper was sponsored by Muammar Gaddafi. Al-Hayat on the other hand is still owned today by the Saudi Royal Family. Back in the 1980s, I could not write a bad word about Gaddafi and these days I keep my opinions about Saudi Arabia to myself. These are things I have mentally locked away. My philosophy when it comes to journalism is as follows: I believe in everything I write, but I do not write everything I believe in. 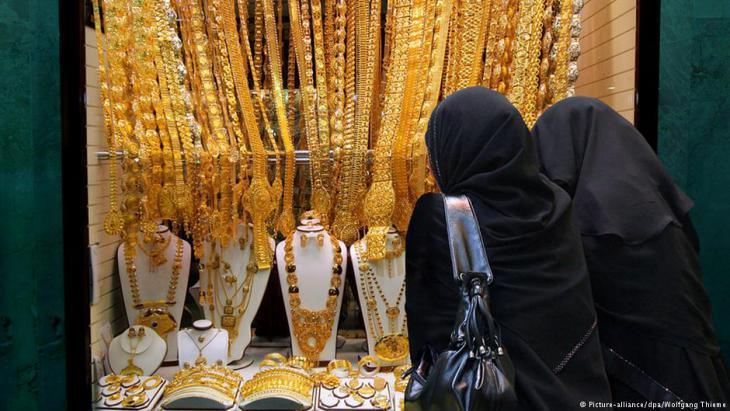 Cowardly, apolitical middle class: "it does not regard itself as a catalyst for political change, being driven more by financial interests. That′s why the private sector has never bought into the media. Oligarchs, despots and governments from Rabat to Riyadh therefore have an easy job controlling the information landscape," comments Saghieh

Do you think that many journalists in the Arab World share the same approach?

Saghieh: Of course. Authors or reporters across the Middle East will tell you that this kind of self-censorship is common, because it is necessary. And it is not merely the political authorities you have to be wary of. It′s society as a whole. Once as a young journalist in Beirut I reported about an honour killing. Afterwards I received a number of threats from people close to the alleged perpetrator. Journalists who report about issues that diverge from the social or political norm face the same risks. If you write about sexuality or religion or about the possibility of peace with Israel, you will be given a hard time. The pressure to conform to accepted social narratives is so immense that it inhibits the emergence of a lively media landscape.

Can the media in the Arab World ever be understood as a Fourth Estate, as a counterweight to establishment politics, then?

Saghieh: It is overly optimistic to view the Arab media as a catalyst for change, let alone a Fourth Estate. The primary purpose of the newspapers and TV channels in the region is to safeguard the societal and political status quo.

Is that due solely to the control that the ruling class exerts over the media and journalistic self-censorship, or are there other reasons?

Saghieh: There is no doubt in my mind that those are the two most important points. However, they probably would not have as much weight if it weren′t for a third factor: the cowardice of the middle class. Given the system, you might expect those in power and the financial elites to quell critical journalism and oppose change of any kind. But then there is the Arab bourgeoisie, which has never really aspired to use the media in order to achieve change. The middle class does not see itself as a political force and therefore the private sector has never bought into the media. That is what enables oligarchs, despots and governments from Rabat to Riyadh to control the information landscape.

You′d like people to be more courageous when it comes to opposing state-controlled media? 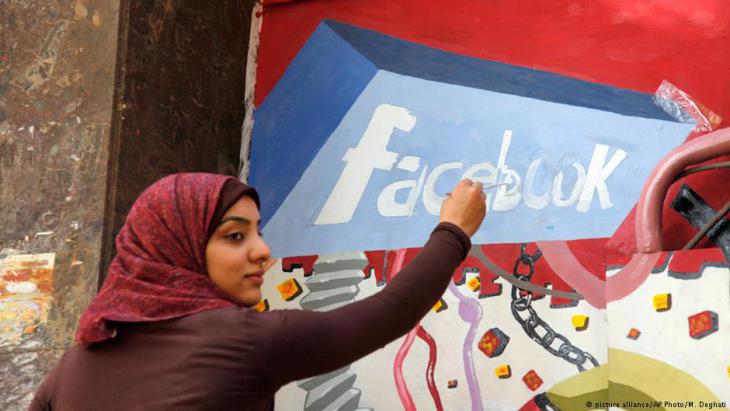 Arabellion on Facebook: "Millions of people connected via social media, but in a way there was a lack of content, content necessary to catalyse more meaningful action. The basic demand was freedom – a very respectable cause worth fighting for. Still, the longing for freedom in itself was not enough. There needed to be ideas, discussions about what to do with that freedom once it had been achieved," reflects Hazem Saghieh

Saghieh: Courage is a big word when people are faced with regimes that don′t allow any form of civil society to exist. If a couple of Syrians meet to discuss how to best dispose their domestic waste, they are probably already being blacklisted by the secret service. In many places, critical debate is simply forbidden. That′s why I fear that it is too late to reclaim the media industry.

Still, during the Arab Spring many people set their hope on the media, especially social media, as a revolutionary force…

Saghieh: Sure, social media briefly enabled people to disrupt the rulers′ monopoly on information and communication. The Arab youth suddenly found a way of organising itself. Platforms like Facebook took on the function that political parties had had in the past – and in party this digital form of organisation worked even more effectively.

Nonetheless, the initial enthusiasm was followed by the great failure of the revolutions.

Saghieh: Simply being able to communicate was not enough. Millions of people connected via social media, but in a way there was a lack of content, content necessary to catalyse more meaningful action. The basic demand was freedom – a very respectable cause worth fighting for. Still, the longing for freedom in itself was not enough. There needed to be ideas, discussions about what to do with that freedom once it had been achieved. Social media turned out to be the wrong platform in that regard. But this ideological vacuum also did not come as a surprise: in a realm where political debates have been suppressed over decades and centuries, there is no room for new visions to blossom. And the few visions that exist are anti-visions.

Saghieh: Anti-colonialism, anti-Americanism, anti-Zionism – those are the critical strands of thought which are commonly accepted within the Arab media sphere. People have no problem showing courage and conducting investigative journalism when it comes to these issues. However, this alleged courage isn′t worth much, since there is no risk involved. In a sense, this sort of ″journalism″ reflects back upon us, those working in the media and our situation: we are doomed to exclude our own rulers from criticism, while at the same time being ever the more critical of the outside world. We are anti-Imperialists, but who are we, once imperialism vanishes?

That sounds like resignation. Do you completely dismiss the idea that journalism in Lebanon and elsewhere could have some revolutionary potential in the future?

Saghieh: The media cannot induce change on their own. Even were we to report on feminism, equality or religious freedom – all great topics – the situation of the people would not change. The political situation needs to change first. Since the failure of the Arab Spring, however, the pendulum is swinging back in the opposite direction: towards greater repression.

Home
Print
Newsletter
More on this topic
Egypt after the coup: Two sides of the same coinSocial media and the Arabellion: The myth of the Facebook revolutionQantara dossier: "Freedom of the Press"
Related Topics
Arab Spring, Arabellion, Democracy and civil society, Free speech and censorship, Freedom of the press, Media in the Arab World, New media in the Muslim world
All Topics

The world must take action now to prevent a deep and lasting humanitarian crisis in Afghanistan. But what, if anything, can be done? The one billion dollars pledged by ... END_OF_DOCUMENT_TOKEN_TO_BE_REPLACED

"The people aren’t ready for democracy" has been the constitutional basis for Arab tyranny, its favourite slogan and its sacred narrative for more than a century. Yet, asks Khaled ... END_OF_DOCUMENT_TOKEN_TO_BE_REPLACED

International relations are shifting across the Middle East as regional powers adapt to America's retrenchment and China's growing influence. Although the region could become the ... END_OF_DOCUMENT_TOKEN_TO_BE_REPLACED

Caught up in discussions on the future of local Afghan forces and new Islamist threats, people are failing to grasp the historic scale of the debacle, argues Stefan Buchen in his ... END_OF_DOCUMENT_TOKEN_TO_BE_REPLACED

The coronavirus pandemic has turned lives upside down all over the world. In the Middle Ages, however, people lived with epidemics all the time. The best and most famous ... END_OF_DOCUMENT_TOKEN_TO_BE_REPLACED
Author:
Kai Schnier
Date:
Mail:
Send via mail

END_OF_DOCUMENT_TOKEN_TO_BE_REPLACED
Social media
and networks
Subscribe to our
newsletter