Zineb El Rhazoui is one of the coordinators of the "20 February" movement that mobilised large numbers of demonstrators on Sunday, 20 February. Chanting "I am Moroccan!", they took to the streets, marching for democracy and social justice. Claus Josten spoke with her 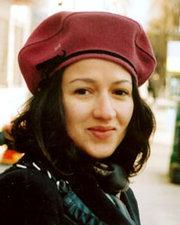 Zineb El Rhazoui: "An open debate on the monarchy has been launched. This would have been unthinkable just a short time ago. Today, demands are being voiced for the first time for a true parliamentary monarchy, and that alone is a major triumph."

​​Last Sunday, thousands of Moroccans followed a call posted on Facebook to demonstrate in several Moroccan cities for political reforms and freedom of expression in their country. Protests once confined to the Internet have now become an active movement …

Zineb El Rhazoui: Yes, despite all the manoeuvres to stop the march, the 20 February initiative has in fact developed into a movement over the past few weeks. People here are fed up; Moroccans are no longer willing to accept the political system, the "Makhzen", and the economic misery in the country. Politicians are using tax revenues to run propaganda machines. An image of democracy and modernity is generated for the benefit of the foreign media, while those of us who live here know all too well how far that is from the truth.

Our demonstration would have already been a success even if we hadn't been able to mobilise so many people – for the very fact that it took place at all. A large number of non-governmental organisations – such as the Moroccan Human Rights Association (ADMH), various Islamic political currents, feminists, liberals, Communists etc. – have agreed on a grass roots platform that demands not only constitutional reform, but a completely new constitution!

They all chanted "Majidi dégage", demanding that the King's secretary and the chairman of the royal cabinet step down. Or they called out "El Himma dégage", referring to the founder of the new royalist party PAM ("Authenticity and Modernity Party"). An open debate on the monarchy has been launched. This would have been unthinkable just a short time ago. Today, demands are being voiced for the first time for a true parliamentary monarchy, and that alone is a major triumph.

Are we now witnessing an awakening in the country like the one that took place after the death of Hassan II under his successor Mohamed VI – even if it only held for a few years?

El Rhazoui: That's exactly the dilemma in Morocco: Hassan II, a dictator, died relatively young. He would have been the same age today as Hosni Mubarak. What happened in Morocco after his death was, however, a complete bluff, the bluff of an apparent transition, of supposed change. Mohamed VI did at least try to break with the autocratic image of his father, so he did show certain signs of opening up. There was evidence that he would grant a new kind of freedom, the burgeoning of a free press being one example. Many believed in this, and great efforts were made to ensure that these new freedoms would serve to build a genuinely new society.

But the picture has in the meantime changed completely. We can hardly compare ourselves today with the Morocco of 2002. The recent demonstrations are an expression of a rage that has been brewing for years. Thanks to the uprisings in Tunisia and Egypt, we now have the courage to rise up as well and shout "basta!" We don't want the king to be able to build up so much power that people think we're idiots.

​​I think this regime's days are numbered. It won't be able to hold on in the long run; the people have simply had enough. Moroccans from all walks of life came together to protest in the streets. You have to imagine it: for the first time, the populace dared to take to the streets en masse to demand limitations to the king's power!

El Rhazoui: That's exactly it! Regardless of whether the king really means well or not, regardless of his possible intentions or of whether he is competent or not, the structural problem lies in the accumulation of so much political power in his hands.

The people are indignant about the economic empire built up by this "Makhzen" elite. And they have now comprehended the way it is economically connected with the spiralling prices of our basic food staples. Milk, sugar and olive oil are all in the hands of the big royalist holding company "Omnium North Africa" (ONA). What's more, the state even subsidises the ONA monopoly. So the king profits doubly: from tax money and from the citizens.

Among other things, the demonstrators chanted: "Who does the milk belong to?!" or "Who does the oil belong to?!" These were the low-wage earners, the poor people, but also members of the middle class as well as owners of small businesses. Even a few bigger businesses and "bosses" participated in the protests. Their creed was basically that the king should step down from his position of economic power. He can't have absolute political power and also be the state's "first businessman". No one is able to invest today wherever the king has a monopoly.

How is the Internet helping you to contribute to fomenting this gentle civil transformation in Morocco, and what barriers do you come up against?

In several Moroccan cities including Marrakech, the demonstrations were followed by serious rioting; five people were killed, 128 injured, and 120 arrested

​​El Rhazoui: We still have a stable and functioning civil society. And despite one of the highest illiteracy rates in the Arab world, we have young people with good vocational qualifications and an excellent young elite. There's no way to stop the information flow through the Internet. Even though the "Makhzen" tries to disrupt our lines of communication, they can't really prevent the truth from getting out. We just hope that these islands of civil society can become a base. The state never encouraged us in this respect. Instead, we have had to fight our way step by step with hard work and plenty of courage.

Many of us have experienced what it's like to spend several days in prison, and we've had regular run-ins with the police. On our Facebook pages, for example, they have the secret service massively denounce us one after the other as racists so we are automatically blocked. We are constant victims of Internet piracy, as well as targeted political defamation, charging for example that we are all being manipulated by the Western Sahara liberation front Polisario, or by Algeria or Spain. But these are all merely transparent machinations. The fact is: after this 20 February, the state should finally respond to the demands of the people! Otherwise, the protests will continue …

Interview with Abdelilah Benkirane
"Islam Is Not a Static Religion"
The Secretary General of Morocco's Justice and Development Party, Abdelilah Benkirane, is one of the country's most influential politicians. In an interview with Rim Najmi for Qantara, Benkirane talks about his party's standing in Morocco's political landscape and explains in what way Islam influences his parties' politics

END_OF_DOCUMENT_TOKEN_TO_BE_REPLACED
Social media
and networks
Subscribe to our
newsletter