Do your comments on democratisation also apply to Morocco, which has experienced various social protests? From the outside, it seems that a wave of despair has struck the country. Do you believe that Morocco, in its current situation, is also moving towards democratisation, or would it require an even greater social or political movement?

Aourid: As a political scientist, I deal with long-term processes, i.e. historical time. I have already said that the whole region must move towards democratisation, and Morocco is no exception. This is shown by the fact that Morocco also experienced a protest movement nine years ago. There has been progress and regression, as always when we look at short-term developments within the context of political time.

In the long run, however, there is ultimately no alternative to participation in government, no alternative to transparent rules regarding the distribution of wealth, no alternative to a universal culture. For me, this is the cycle of history, and it will come about either through compromise involving everyone across the political spectrum including the state, or there will be an eruption of violence.

However, I cannot say whether a forward-looking approach to these developments will prevail. It depends on the balance of power, as well as on the prudence of politicians. However, I know that Morocco will not be the exception.

You believe that Morocco will not be an exception. There are those, however, who point out that the human rights situation in Morocco has deteriorated again in recent years, that political power is in the hands of a few people and that the government's decision-making power is increasingly being curtailed. Is the progress that has already been made in Morocco in danger of being destroyed?

Hassan Aourid: What has happened in the region has naturally affected Morocco too. Without the 2011 movement, there would have been no possibility of constitutional reform. The failure which we have seen across the region has undoubtedly emboldened the regime. Of course, democratisation cannot evolve through good intentions alone; it requires a vision and the corresponding balance of power. Context is also important: unfortunately, however, the current world political situation is far from conducive to democratic aspirations.

In addition to political questions, you also deal with other topics: during an event organised by the news portal "Hesspress", you demanded that science be taught in French. You said that today Arabic is no longer a scientific language, that more is translated into Greek than into the Arabic spoken by 350 million people, and that the pan-Arab idea is reaching its limits in political practice. Why so harsh?

Hassan Aourid: Arabic certainly has the potential to be a scientific language, but it depends on how people use it. Dictionaries don't make language, a language lives through the people who write and speak them. Without them, language is mute. There is no question that Arabic has shown a huge capacity for advancement throughout its long history, but the current reality confirms that the language is suffering a malaise, all the more so since the weakness of Arabic is also its strength. It is a language spoken across many countries; it is not a national language like Turkish, which is the language of one country.

Given that Arabic belongs to many countries, it is essential that there is co-ordination between them, but alas, this does not exist because there is no single definition of what proper Arabic is. For this reason, Arabic has ceased to develop as a language. Personally, as a political science teacher I have great difficulty in finding the right expression in humanities, let alone in science.

It is not about coming down in favour of French. I want Moroccans to have access to science, and scientific knowledge is currently available in French in Morocco. The quickest way to acquire detailed expertise in Morocco is through the French language. 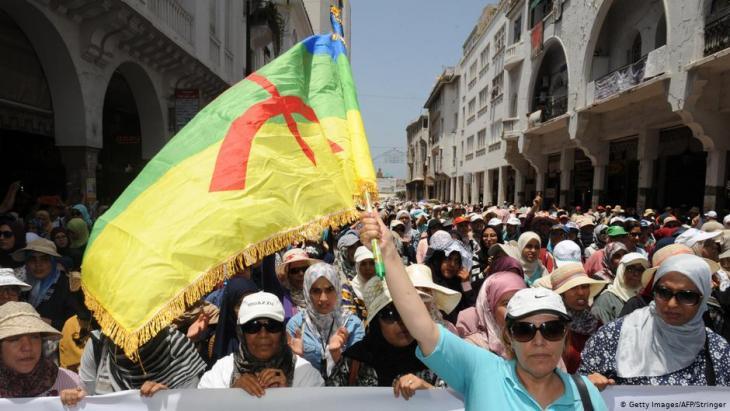 Not a homogeneous society, but an identity that has evolved historically from many different influences: "You have to imagine the realities in Morocco: when you break down the collective intellectual and cultural structure, you will see that it is an amalgam of Arabic and Amazigh," says Moroccan political scientist Hassan Aourid, who has made a name for himself through his numerous publications in various offices, including as a historian and palace spokesman

You have always advocated strengthening the Berber Amazigh culture in Morocco and are seen as a champion of their language, Tamazight. In a reply to the former Moroccan Minister of Culture, Bensalem Himmich, you wrote, "I do not reject my identity as Amazigh, nor my identity as Arab, but they both meet in this unique construct called Morocco". Is it not a contradiction for you to be Arab and Amazigh at the same time? Some people think such a thing is impossible.

Hassan Aourid: If you look at the issue from an ideological perspective, then it’s not possible. You can’t be Muslim and Jewish at the same time, you can’t be a liberal and a communist at the same time, but you can speak English and French, so culturally it is do-able. I love pre-Islamic poetry and I love al-Mutannabi, but equally I love Tamawayt and Amazigh folkloric literature. You have to imagine the realities in Morocco. When you break down the collective intellectual and cultural structure, you will see that it is an amalgam of Arabic and Amazigh. But if you look at it from an ideological perspective, then of course, it’s impossible.

Everything that has to do with language would seem to have great potential for conflict throughout the Maghreb. For example, there are those who repeatedly speak out against the designation of the Maghreb states as Arab countries. On social media, people from North Africa are often the butt of negative comments made by other Arabs. How do you regard such tensions?

Hassan Aourid: In answer to this question, we have to look at history: this region which extends from the west of Egypt to the Atlantic Ocean used to be called the land of the Berbers. This was the original name used to denote the Amazigh, who became more and more Arab, albeit deep down they remained Amazigh. We know that before the French occupation of Algeria, 60 percent of the population were Tamazight speakers, and before the French protectorate in Morocco, 80 percent of Moroccans were Tamazight speakers. This is historical data, and thus we are originally Berbers who were Arabised.

Needless to say, whatever our race, humanity tends towards cross-fertilisation. There is no pure social group; on the contrary, our identities have become conjoined. Whether we like it or not, there is an intellectual and cultural commonality stretching from the Sinai to North Africa.

At the same time, we cannot deny that Arabic has had a great influence over broad sectors of our societies, and therefore we should not hold fast to a supposedly pure ethnicity. We should have a historical awareness to accept all facets of North African culture, and we need to get beyond the discourse of identity.

Identities can kill, sadly. Hence we need to identify a common denominator through our shared values. If we continue to insist on being either Arabs or Berbers, conflict is inevitable. To prevent this, we need our intellectuals. They must work on a common future which, in my view, is much more important than constantly harking back to the past.

Home
Print
Newsletter
More on this topic
Indigenous rights in the Maghreb: An uphill struggle for Tunisiaʹs AmazighMorocco′s Amazigh: The long road to recognitionUnrest in the Arab world: The genie is out of the bottle
Related Topics
Arab Spring, Arabellion, Arabic language, Democracy and civil society, Ennahda movement, History of Islam, History of the Near and Middle East, Human rights, Islamism | Political Islam, Justice and Development party (Morocco), Mohammed VI of Morocco
All Topics

Political analyst Taqadum al-Khatib argues that Egypt can, in co-ordination with its European partners, develop a common vision to solve the complex conflict in Libya. For this to ... END_OF_DOCUMENT_TOKEN_TO_BE_REPLACED

The upheavals of the past year in the MENA region are arguably as momentous as those of the Arab Spring in 2011. Yet perhaps the biggest difference is that our interest seems to ... END_OF_DOCUMENT_TOKEN_TO_BE_REPLACED

Algeria's political impasse has been going on for weeks. Attempts to calm the public mood by sacrificing some of the Bouteflika faithful has only served to fuel demonstrators' ... END_OF_DOCUMENT_TOKEN_TO_BE_REPLACED

Nearly a decade after the Arab Spring fizzled out, a new wave of protests has swept across the Middle East and North Africa. What is different this time – and will the protesters ... END_OF_DOCUMENT_TOKEN_TO_BE_REPLACED

The Arab world is one gigantic pressure cooker. For the most part the lid of repression is on, but it is boiling over with increasing frequency. Whether in Lebanon, Iraq or in ... END_OF_DOCUMENT_TOKEN_TO_BE_REPLACED

In the wake of the Arab Spring, not one Arab dictator has faced charges for creating a police state and inducing terror among citizens. Similarly, none has been prosecuted for ... END_OF_DOCUMENT_TOKEN_TO_BE_REPLACED
Author:
Ismail Azzam
Date:
Mail:
Send via mail