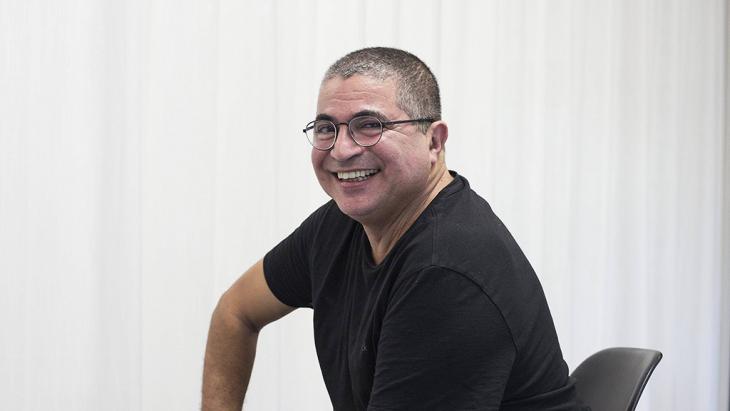 Interview with the Moroccan writer Mahi Binebine
Forging a future

Since the publication of his most recent novel, "Horses of God" (2013), based on a true story about young suicide bombers, Moroccan author and artist Mahi Binebine has been spending time working with disadvantaged youngsters in the slums of his native country. Interview by Michaela Maria Muller

You are a successful writer, artist and activist. How do you manage to combine these roles?

Mahi Binebine: I hate being an activist (he laughs). I can't get down to any work. I write a novel every couple of years and organise anything from ten to twenty exhibitions every year. In both my art and my writing I try to deal with issues such as migration and the causes of terrorism, but it is my practical work that really allows me to help people. There is a big difference between just writing about things and actually getting involved in helping directly.

Your art is very much about people. Your paintings often depict bodies that appear to merge into one another, or tell the story of an encounter. Your books deal with socially and politically relevant issues long before the public is even aware of those issues. In your 2003 novel, "Welcome to Paradise", you describe the fate of a group of migrants attempting to make the crossing from Morocco to Spain by boat. "Horses of God", published in 2013, is about the radicalisation of underprivileged youngsters.

Binebine: Yes, but I still have the feeling that my writing lags behind these developments. Morocco was left in a state of shock by the terrorist attacks on Casablanca. No one at that time thought that such a thing could happen here. We believed we were living in a healthy society. I began looking into what had happened and soon realised that I had never actually seen the Sidi Moumen slum. It is located next to a busy highway, hidden away behind a high wall, its squalor screened from view. There is nothing visible at all – a hidden city of 300,000 inhabitants. In the middle of the slum there is a gigantic rubbish dump. I didn't recognise my own country. One thing I saw there I will never forget; a group of children were playing football on top of the rubbish dump. When I saw them, I knew that they would become the heroes of my next novel.

Your book was filmed by Moroccan director Nabil Ayouch

Binebine: We worked with young amateur actors from Sidi Moumen to make the film. During the shoot they were housed in an apartment in Casablanca; there they could enjoy good food, wear nice clothes and were able to take a shower. As the end of filming drew closer, Nabil asked: "What are we going to do with the children?" I told him I had no idea. We talked about it a lot and finally decided that we had to do something for the children and young people.

What did you decide?

Binebine: I got in touch with other painters I know all over the world and asked them if they would be willing to provide one of their paintings for auction. Some of them are very well-known artists. We received nearly a hundred paintings and made a lot of money. Then we arranged a meeting with the mayor of Sidi Moumen and asked him to give us some land. At the end of our one-hour meeting he gave us much more than we had asked for: a cultural centre, all 2000 square metres of it, was to be ours on condition that we look after its maintenance. It was everything we needed to get started with our work. Since then we have also managed to secure long-term funding for it.

What does your cultural centre offer the youngsters?

Binebine: At the moment we have weekly drama courses for various age groups, as well as ballet, hip-hop, piano lessons, photography and Business English courses for adults. There are now 400 children and young people registered for the activities in the Sidi Moumen centre. And as many again who are desperate to take part.

If you compare the lives of young migrants in the rundown banlieues of Paris with the situation in the shantytowns of Casablanca, do you think that they have anything in common?

Binebine: Both governments have made similar mistakes. In the 1950s and 60s countries like France and Italy began building social housing projects on the outskirts of cities. In doing so, they failed to realise that they were creating something tantamount to exclusion zones. With the passage of time, some of these suburban settlements have become lawless areas where violence is endemic and the only effective means of asserting yourself. We are now paying the price for past mistakes.

Can you explain how the radicalisation process works with the youngsters in the Moroccan slums? 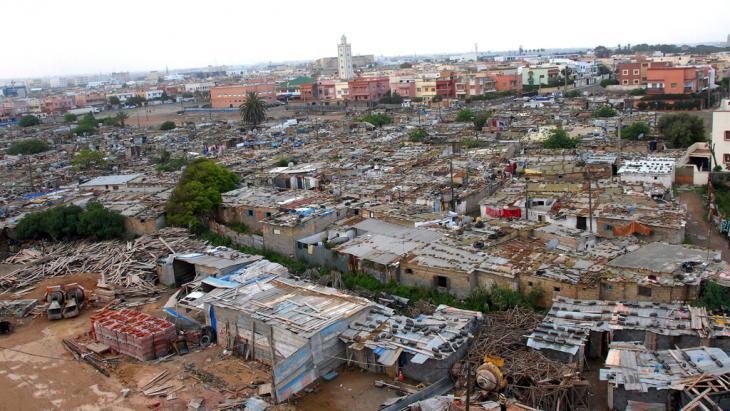 Boundless misery as a breeding ground for religious extremism: "We want to use culture to counter the Islamist terror bred in the slums. The religious mafia make use of religion to turn people to their extremist cause. We try to show them through our many cultural activities that that message is wrong," says Mahi Binebine

Binebine: Following the 2003 attacks, I spent a lot of time in Sidi Moumen with a journalist, a guy who had been brought up there. I also talked to the families and friends of the bombers. They told to me how the Islamists very gradually begin to work upon the children. They are literally pulled from the rubbish heap and told that they should be clean. They are given a place to stay, somewhere they can wash themselves and get something to eat. Then they are taken to the mosque, where they pray five times a day and study the Koran. Separated from their old friends and families, they become part of a different community. Jobs are found for them and their radicalisation is the final stage in the process. Propaganda videos are shown to them and the content of the film linked by the Islamists to conspiracy theories about supposed Jews or alleged American imperialists. Of course, the poor Arabs are always presented as the victims of aggression. The children are shown films of bomb attacks that glorify the bombers and they are told that they have now become the chosen ones. From then on, around two years are needed to turn them into human bombs. A 14-year-old child in the hands of the terrorists will be ready to blow him- or herself up for the cause by the age of 16.

What would you like to achieve through your social engagement in the slum?

Binebine: Ultimately what we want is to provide the children and young people with an environment where they can develop freely. We want to use culture to counter the Islamist terror bred in the slums. The religious mafia make use of religion to turn people to their extremist cause. We try to show them through our many cultural activities that that message is wrong. But we have to change the living conditions also. It cannot be that we allow a system to persist that permits our middle classes to hire a driver or a housekeeper for a pitiful 150 euros a month.

Binebine: We are planning to open more centres during the course of this year: in Tangiers, Fez and Ouarzazate. The shantytowns are where the Islamists are active. We are doing something to counteract their influence and are currently taking on new staff at Sidi Moumen.

Moroccan author Mahi Binebine is a genuine all-rounder. After moving to France and completing his studies in mathematics he worked as a teacher. During this period he also discovered his talent for painting. The Guggenheim Collection in New York is just one of the galleries where his paintings are now exhibited. He has written a number of successful novels that have been translated into many languages. The most recent of these, "Horses of God", (originally published in French as ″Les etoiles de Sidi Moumen″ (2008)) is published by Tin House Books.

Her grandparents are Jews – born in Tunisia and Algeria. Director Cleo Cohen has now broken the silence about this with a very personal debut. By Nadine Wojcik END_OF_DOCUMENT_TOKEN_TO_BE_REPLACED

Moncef Marzouki was Tunisia's first democratically elected president after the fall of dictator Ben Ali. Today he is the most prominent critic of increasingly counter- ... END_OF_DOCUMENT_TOKEN_TO_BE_REPLACED

Moroccan sociologist Fatima Sadiqi believes that women's movements in North Africa have changed over the past ten years. Today, women from all social classes are fighting together ... END_OF_DOCUMENT_TOKEN_TO_BE_REPLACED

In her latest novel, Catalan-Moroccan writer Najat El Hachmi tells the story of a young migrant woman struggling to balance her desire for freedom and the demands of tradition and ... END_OF_DOCUMENT_TOKEN_TO_BE_REPLACED

The memory of experienced injustice plays a central role in the transformation of societies towards democracy. In the Arab world, the critical study of memory is only just ... END_OF_DOCUMENT_TOKEN_TO_BE_REPLACED
Author:
Michaela Maria Müller
Date:
Mail:
Send via mail

END_OF_DOCUMENT_TOKEN_TO_BE_REPLACED
Social media
and networks
Subscribe to our
newsletter