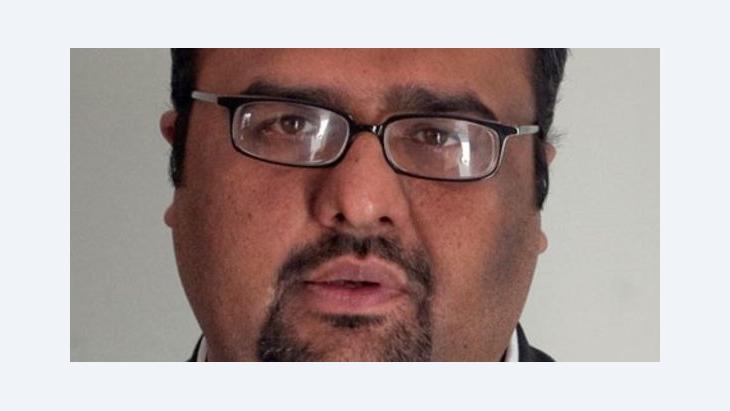 ﻿Pakistani lawyer Mirza Shahzad Akbar defends victims of American drone strikes in the Waziristan region of Pakistan, not hesitating to press charges against employees of the CIA. Marcus Michaelsen spoke with him

Mr Akbar, was there a concrete event that gave rise to your involvement?

Mirza Shahzad Akbar: In 2010 I became acquainted with the journalist Karim Khan from Waziristan, who had lost his son and his brother in a drone attack. I found the brother's fate particularly moving: an elementary-school teacher, he had spent years earning a university degree, which would have enabled him to find work anywhere in Pakistan. But he chose to return to his homeland to teach. And then he gets killed by a drone! His brother had not been able to find a lawyer, so I took on the case.

What steps did you take?

Akbar: First, we had to identify a guilty party. As the drone strikes were carried out under the supervision of the CIA, we initiated legal proceedings against the station chief in Islamabad and made his name public. The reaction showed us that we had found the right person: within two days, the man was withdrawn from his post. We also filed charges against John Rizzo, a CIA lawyer who approved attacks from 2004 to 2009. 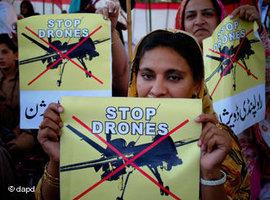 Military deployments at the expense of the civilian population: since 2004, the USA has been carrying out unmanned drone strikes against rebels in Pakistan and Afghanistan, in the process killing numerous uninvolved civilians.

​​And in the United Kingdom we are currently demanding an explanation of what information British intelligence passed on to the Americans. We believe that this information formed the basis for an attack in which the father of one of my clients lost his life.

How many people do you currently represent?

Akbar: The problem is that those affected come from an underdeveloped region and have little knowledge of their rights. But revealing the identity of the CIA head in Pakistan attracted a great deal of attention, so that more relatives of drone victims came forward and asked us for help.

Before long, I had taken on twelve new clients who had lost a total of 25 family members. We brought them to Islamabad to demonstrate before parliament and to put them in contact with the media. By now I'm representing about 50 families. A few tribal leaders have authorised us to represent their entire territories.

What aims are you pursuing?

Akbar: It's very simple: we want the attacks to stop. Or at least the entire drone programme to be put under legal and parliamentary control. The families of those killed in the attacks to date must receive appropriate compensation. It's a matter of justice and transparency.

How many people have been killed thus far and how are you able to verify the number of victims?

Akbar: There are of course no precise statistics for the region, which is inaccessible to us. The Pakistani intelligence service and the CIA do not disclose any information. We have been busy training contacts from Waziristan, who are trying to obtain initial information from those affected.

The London Bureau of Investigative Journalism has published a report with figures that are in keeping with our findings. It says that more than 300 attacks have been flown so far, in which some 3,000 people lost their lives. 40 of them were extremists who were known by name, a further 200 to 300 could perhaps be classified as members of militant groupings. But everything beyond that is unclear. What crimes had those killed allegedly committed? There are also a number of children, women and older people amongst the victims.

What do you know about how the strikes are planned and executed?

Akbar: The CIA first gathers information through aerial surveillance, wiretapping and on-site agents. We do not know to what extent it has a network of its own sources. It may be assumed that the tip-offs come from the Pakistani secret service.

Once a suspected extremist location has been pinpointed, the drones are dispatched there. The pilot is sitting somewhere in the USA and can only detect with his camera that a few people are assembled who might be holding weapons, as is customary in the tribal areas.

This is how the decision for a launch is made. The worst part is that sometimes the same area is bombed again while rescue work is under way, evidently on the assumption that the helpers must also be extremists. Now hardly anyone dares to come and help the wounded during the first hours after an attack.

How did the drone strikes change after President Obama assumed office?

Akbar: Before Obama, the strikes came only at irregular intervals. But since then the number has drastically increased. I think that Obama is trying to live up to his promise of bringing the troops home. At the same time, he has to let the Pentagon and the Defence Ministry have their way, as they wield a great deal of political influence. 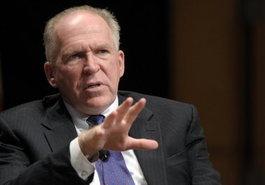 John Brennan, Obama's adviser and anti-terror specialist, defends the use of drones against suspected terrorists in Pakistan and other countries as "ethical" and "legal"

​​The drone programme is a new and attractive way to wage war, while ground troops are harder and harder to justify on the domestic front. Waziristan is depicted as a terrorist breeding ground, and the US Administration can show that it is still resolutely waging war against terror.

What do you think of the stance taken by the Pakistani government toward the attacks?

Akbar: We know from documents published by Wikileaks that the current government advocated the strikes. But now it wants less and less to do with them. After Obama publicly owned up to the drone strikes for the first time, in January, I wrote a letter to our Prime Minister Gilani demanding that he take action against them.

He could demand compensation, go before the UN Security Council, or initiate a judicial inquiry into who is being targeted by drones and on what grounds. He should merely do his job as elected representative of our country. If he does not react to my letter, I will assume that he supports the attacks and I will file charges against him, too.

In defence of the drone strikes, many people say that Pakistan is not doing enough to fight the extremists in Waziristan, who use the region as a base for launching attacks on US troops and their allies in Afghanistan. The USA is therefore forced to take matters into its own hands, they claim.

Akbar: American arguments citing self-defence are a joke. If the Pakistani military is so unreliable, why is it still receiving financial support from the USA? Besides, the drone strikes have hardly any impact on the situation in Afghanistan. The militants killed in them are usually members of the Pakistani Taliban who are scarcely active on the other side of the border.

The root cause of extremism in both countries is the very presence of the US military. This presence provides a compelling argument for recruiting new members to militant groups. The Americans are now like the proverbial bull in the china shop – no matter what they do, they destroy something. They must withdraw in order to deprive extremism of at least part of its lifeblood.

Education for girls and women is still possible in Afghanistan, says Reinhard Eroes of the Kinderhilfe Afghanistan initiative. In interview with Elisa Rheinheimer, he talks about ... END_OF_DOCUMENT_TOKEN_TO_BE_REPLACED

A lawmaker in Pakistan's rugged northwest was sipping tea with voters when his phone chirped to life – the Taliban were calling with a demand for 'donations'. "We hope you won't ... END_OF_DOCUMENT_TOKEN_TO_BE_REPLACED

Cries of "Benghazi!" still resonate across the USA ten years after a deadly terrorist attack in Libya killed the U.S. ambassador and three other Americans. Ethan Chorin re-tells ... END_OF_DOCUMENT_TOKEN_TO_BE_REPLACED

Sufism has fluid boundaries. Just like Islam, Sufism is inconceivable without its late antique roots. Then again, it has also exerted an influence on Hinduism. Moreover, the Sufic ... END_OF_DOCUMENT_TOKEN_TO_BE_REPLACED

Journalist Waslat Hasrat-Nazimi was forced to flee Afghanistan with her family as a child and grew up in Germany. To mark the publication of her book "The Lionesses of Afghanistan ... END_OF_DOCUMENT_TOKEN_TO_BE_REPLACED

Just as the Islamic Revolution fundamentally changed Iran 43 years ago and had an impact far beyond the country's borders, the current wave of protests sweeping the country is set ... END_OF_DOCUMENT_TOKEN_TO_BE_REPLACED
Author:
Marcus Michaelsen
Date:
Mail:
Send via mail

END_OF_DOCUMENT_TOKEN_TO_BE_REPLACED
Social media
and networks
Subscribe to our
newsletter