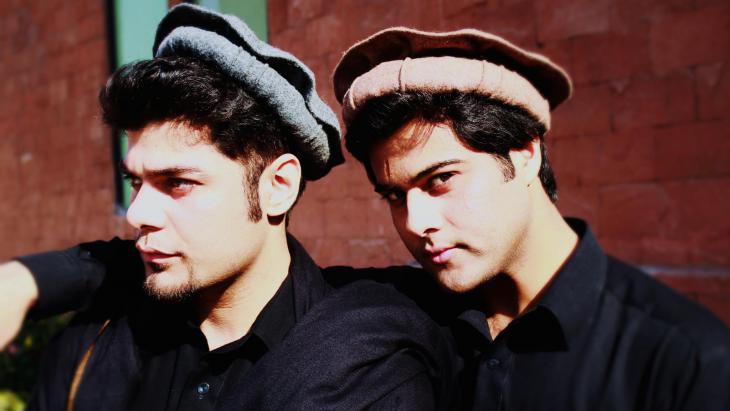 "Music was the best resistance I could think of"

Pashtun musician Ismail Khan combines traditional elements of his people′s folk music with modern beats. Resisting the media image of extremism, drone strikes and suicide attacks commonly associated with the Pashtun homelands – Afghanistan and the tribal areas of Pakistan – Khan is looking to promote peace in this region riven by war and destruction. Interview by Emran Feroz

You are known for mixing classical elements of music with modern ones. Why, in your opinion, is it important to do this in the case of Pashto music?

Ismail Khan: We all know that change is the only constant. As the rest of the world becomes a global village, Pashto music is dying out among the modern Pashtun youth. Everything is changing and everyone uses all kinds of media these days to keep up with the pace. But Pashto music has not changed; in some ways you could even say it has gone back in time. For its revival, I had to mix folk elements of Pashto music with modern elements and it worked.

Apart from the traditional music elements, you are also known to draw on the lyrics of famous Pashtun poets. Which of these poets are important to you and how have they influenced you?

Khan: As soon as I started making music I tried not to read any poetry books, preferring to listen to song lyrics. My intention has never been to draw on others for inspiration, but to rely solely on my own originality and creativity. The only Pashtun poet I really admire is Hamza Shinwari, sometimes known as Hamza Baba. I pay tribute to him and his deeply intricate, mystical poetry in my music.

As a Pashtun, can you describe what role music and poetry play in the traditional Pashtun lifestyle of Afghanistan and the tribal areas of Pakistan?

Khan: The region has an age-old tradition of both music and poetry. Since the 1950s, however, media has been used as a major propaganda tool and weapon of war. These days, it shapes the behaviour and the minds of people all around the globe. The same can be said of the Pashtuns in the tribal areas, which is where I come from. There, the result has been confusion: most people do not have Internet access. They have to settle for the base and destructive Pashto music and movies made solely for profit by commercial companies. These movies are not generally based on Pashtun culture or tradition. Instead, they use sex appeal to sell their banal storylines. This has led to considerable annoyance and frustration among the local population. Meanwhile, however, my music has also become established in these areas and, as far as I can tell, it seems to be having a positive impact.

You often say that politics have influenced your music-making. In what way?

Khan: I was always emotional and rebellious. As a child, I always wanted to know more about my people and culture because of my love for them. Seeing the region caught up in a war left me questioning. Where did it all go wrong? Why had this happened to the peace-loving and innocent people of our region? The answer was, in my eyes, a lack of awareness and opportunity. Music was the best resistance I could think of.

Unfortunately, these days, people mainly associate the region with murderous suicide attacks, drone strikes and other issues relating to war and bloodshed. In making and promoting Pashto music, are you also trying to combat this image?

Khan: Pashtuns are peace-loving people. What is going on in this region nowadays was imposed on them and there are various reasons why this happened. In my eyes, music is the best way to fight this and to promote a different view. Media, especially the Internet and social media, are hugely advantageous. They can be used by anyone to spread his or her views. And that′s just what I have done with my music.

You live in Peshawar and London. But your music videos often show you in the tribal areas of Khyber Pakhtunkhwa and elsewhere. What is your connection with the people of the region today and how does their daily life influence you in your music-making?

Khan: I don′t live in London anymore. I was there for several years finishing my masters′ degree, which I completed a year ago. Of course, I could have continued living there – or elsewhere – but I made a different decision. I returned to live in Peshawar. I did not want to break with my region and my people. They have given me so much. I am fine here. That is also the reason they influence my music so much. They are all a part of me. And my music connects me to them all the more. Besides, I do not earn money with my music. I started making music to promote my people, their culture and peace – and that′s what I aim to continue doing.

Home
Print
Newsletter
More on this topic
Non-fiction: ″War, Exile and the Music of Afghanistan″ by John Baily: Without music, no humanitySimin Tander and Tord Gustavsen: The harmony of mysticism The piano man of Taksim Square: Playing for peace
Related Topics
Musical worlds
All Topics

Elke Muller is fighting for her daughter Anna, who fell in love with a young Afghan and converted to Islam. The mother spoke to Esther Felden about feeling alienated and her fear ... END_OF_DOCUMENT_TOKEN_TO_BE_REPLACED

Despite ongoing peace negotiations between the United States and the Taliban, the bloody conflict in Afghanistan continues to take a heavy toll on the country’s people. Can talks ... END_OF_DOCUMENT_TOKEN_TO_BE_REPLACED

Within eyeshot of the Bosnian-Croatian border, thousands of refugees are camping in squalor on a former garbage site. Their supplies are scarce. ... END_OF_DOCUMENT_TOKEN_TO_BE_REPLACED

Under the tutelage of Pakistan's military, the Taliban brought peace to Afghanistan the last time it ruled the country. But it was the peace of the graveyard, which it could ... END_OF_DOCUMENT_TOKEN_TO_BE_REPLACED

In "What We Left Unfinished", Afghan-Lebanese-American filmmaker Mariam Ghani discusses the forgotten era of Afghan Communism and its ties to arts, culture and propaganda. ... END_OF_DOCUMENT_TOKEN_TO_BE_REPLACED

Threatened with death by the Taliban, director Hassan Fazili fled to Europe with his family, filming their odyssey on his mobile phone. Itʹs not the first time that the refugee ... END_OF_DOCUMENT_TOKEN_TO_BE_REPLACED
Date:
Mail:
Send via mail