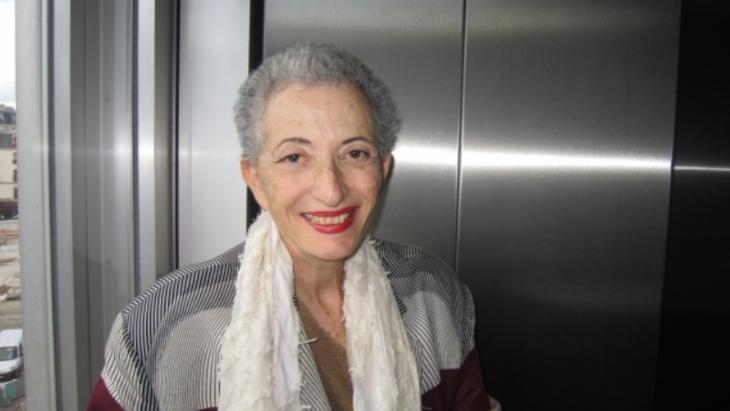 Interview with the philosopher Hélène Cixous

"I don't regret attending the school that is Algeria"

The renowned philosopher and leading French feminist theoretician Hélène Cixous talks about her latest literary work, her lifelong friendship with the "father of deconstruction", Jacques Derrida, and her difficult relationship with Algeria. She is interviewed by Claudia Kramatschek

Hélène Cixous, your book "Insister of Jacques Derrida" was published in German earlier this year. It is an insightful appraisal of the writings of a man who died in 2004, and whose life and work are inextricably linked to your own. Your shared Algerian roots also made this friendship a particularly special one. When did you both realise this about each other for the first time?

Hélène Cixous: Immediately, I think. That's what surprises me the most today, when I look back. And it's still surprising. From the very first meeting, from the first discussion, which was of a literary and philosophical nature and took place in 1963 in Café Balzar, the threads of our lives became intertwined – and it remained so forever. It felt like a kind of miracle. When I met him it was as though I was being reborn. And when I look back now and observe the tracks that we set, I'm astonished. Right back at the time when we conducted our first dialogues, we said fundamental things to each other – without realising it. But nothing has changed with respect to the perception of him as my literary, philosophical and emotional other. 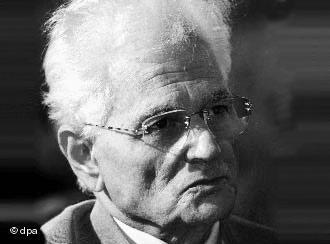 Cixous' friendship with the French philosopher Jacques Derrida (pictured here) was a major part of her life. Derrida, the world-renowned protagonist of postmodernism died at the age of 74 in Paris in October 2004

In "Insister of Jacques Derrida" you describe very vividly how Derrida's texts evoked memories of your childhood in Algeria. This Algeria was still colonised, a divided world per se. To what extent did this colonial Algeria shape your viewpoint and your thinking as a philosopher?

Cixous: This period was crucial for me. I am the result of many different Algerias – all of them very violent, all of them very painful. This painful experience was highly fruitful. I don't regret attending the school that is Algeria – a school of hate, of contempt, of poverty, of danger, of rejection of others, but also of great beauty. And of the absence of all hope, because, after all, this was the era of the Second World War, which imposed itself on everything. Then came the war of independence.

Then, as that war came to an end, when the Vichy laws rendered us stateless and we were no longer regarded as French, when we felt a huge sense of liberation, they made us Jews. Suddenly we were trapped between two forms of anti-Semitism: that of the French and that of the Algerians, who were still referred to as Arabs at the time. So in other words, in a moment of potential promise, everything was immediately shut down again, and in the manner of a colonisation of the harshest kind. Instead of hope, I felt abhorrence and desperation, because Algeria closed in on itself, and this negative and brutal experience caused me to reflect on the political disposition of man: on the fact that we – even if we deny it – are at the mercy of politics, and that this almost always means being robbed of one's possibilities and liberties. This meant my heart was educated by political means.

In your work "Rêverie de la femme sauvage" you say: "I have always dreamed of arriving in Algeria". Have you now arrived there?

Cixous: I couldn't arrive there. But not arriving is not a bad thing. After all, this is the only way to preserve the hope or the yearning to arrive at some point in the future. I have longed for Algeria, but it was always lost for me, right from the outset – in contrast to Derrida, and this was something we often discussed. He took the same line as Camus and dreamed of a federal Algeria where Algerians and French-Algerians could live together. I believed this to be an illusion in view of the Arab population's predicament. I couldn't imagine how people might be healed after the ordeal of such a long and gruesome colonisation. Or in other words: I felt that a rapid reconciliation would be inconceivable.

Do you sometimes go to Algeria, and if so, how do you feel when you are there?

Cixous: I love the country. But I didn't go there for many years. Because of her German origins, my mother stayed in Algeria after independence. She lived and worked as a midwife in the Kasbah of Algiers, right up until the day when the Algerians gave her 24 hours to leave the country. So she was banished from Algeria in the same way as she was from Germany.

After that, we made a break with the country, and I waited for Algeria to wake up, which didn't happen. Then came the "black years", the Algerian civil war, and suddenly everything changed. All those who had not moved and who had identified with a state that excluded them, came to France. And I said to myself: maybe now something is possible among the intellectuals, the Arabs, the French-Algerians and Jews. And at that moment, my country came back to me from an unexpected place, and my country told me to write! I'd never done that before – acting on a sense of wanting to "colonise" Algeria. And so I went to Algeria.

Your mother's language, German, crops up in all your texts. How would you describe your relationship to the German language, and to language in general?

Cixous: When I was growing up, we spoke several languages at home. French was, if you like, the lingua franca. My mother and my grandmother spoke German, my paternal grandmother spoke Spanish. I didn't view any of these languages as superior to the rest; I loved them all. The fact that I didn't study in German later was because of my mother and her past experience. German was rejected. Instead, I learned English, a language that was essentially a ticket to the world. That's how my mother saw it. But German has remained the language of my love, of my intimacy.

Interview and translation from the French: Claudia Kramatschek

The philosopher Hélène Cixous, born in Algeria in 1937, lives in Paris. She is a writer, literary critic and professor. She is regarded as one of the leading French feminist theoreticians and is holder of the French National Order of Merit. Her book "Insister of Jacques Derrida" has just been published in German by Verlag Passagen ("Insister. An Jacques Derrida" ).

Home
Print
Newsletter
More on this topic
Interview with Yasmina Khadra: "The Algerian regime is pulling all the strings"Interview with Benjamin Stora: The Bitter Legacy of Past Franco-Algerian RelationsFrance and the 50th Anniversary of Algeria's Independence: A Pact against Memory
Related Topics
Clash of civilisation, Colonialism, Gender, Literature, Women in the Islamic world
All Topics

"The people aren’t ready for democracy" has been the constitutional basis for Arab tyranny, its favourite slogan and its sacred narrative for more than a century. Yet, asks Khaled ... END_OF_DOCUMENT_TOKEN_TO_BE_REPLACED

As current events continue to remind us, people all over the world are constantly being forced into exile. "Songs of Exile", created by Algerian Berber exile Abderrahmane Abdelli ... END_OF_DOCUMENT_TOKEN_TO_BE_REPLACED

A new survey by Arab Barometer adds numbers to the narrative that COVID has led to a harsher reality for women in the Middle East and North Africa. By Jennifer Holleis and Razan ... END_OF_DOCUMENT_TOKEN_TO_BE_REPLACED

Algerian scholar Said Djabelkhir rejects the charge of "offending Islam". In interview with Ismail Assam, he maintains that he has been wilfully misconstrued. At the same time, he ... END_OF_DOCUMENT_TOKEN_TO_BE_REPLACED

The Libya Conference will be held in Berlin on 23 June. Much has been achieved since the last Libya Conference in Berlin in January 2020. The ceasefire is holding, there is a ... END_OF_DOCUMENT_TOKEN_TO_BE_REPLACED
Author:
Claudia Kramatschek
Date:
Mail:
Send via mail

END_OF_DOCUMENT_TOKEN_TO_BE_REPLACED
Social media
and networks
Subscribe to our
newsletter