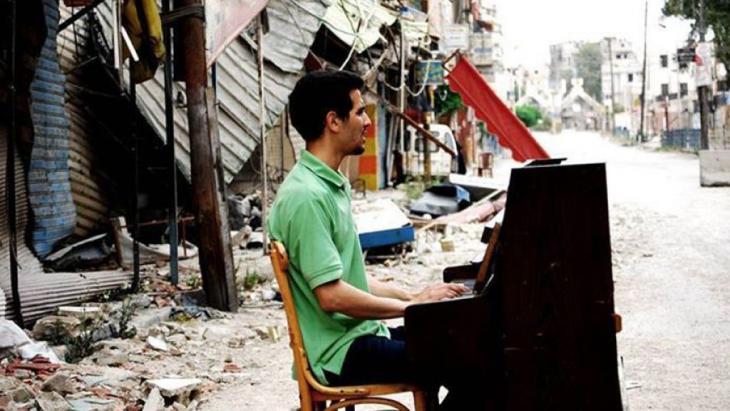 Interview with the pianist Aeham Ahmad
Bittersweet memories of Syria

Syrian Palestinian musician Aeham Ahmad caught the attention of the international media with his singing and piano-playing in the rubble of the Palestinian refugee camp Jarmuk in Syria. Now the 27-year-old has been awarded the International Beethoven Prize. Interview by Rim Dawa

After your music studies at the Al-Baath University in Homs, how did you come to move back to the Palestinian refugee camp Yarmouk near Damascus?

Aeham Ahmad: After the revolution started in 2011, the situation began to escalate everywhere. I was forced to move back to Yarmouk. Then the camp was put under blockade. We had no food, no power and no running water. Everything was crazily expensive and we had to eat plants to survive – sometimes even cats. People were dying of hunger, including some friends and neighbours of mine, while the whole world just watched without taking any real action.

The hardest thing was seeing Ahmad, my son, crying with hunger and I couldn't do anything for him. I felt helpless and that I had nothing to do or to lose. It seemed that I was facing inevitable death, so I decided to face it with dignity and to try to light up hope among the camp's inhabitants with music. I put my piano on a wagon and pulled it onto the street, where I would play songs I composed, inspired by the situation in the camp and in Syria in general, where blood and death are commonplace. I played the piano and sang with friends – sometimes also with children. Zainab, a sweet girl who sang with me – the video is on YouTube – was later killed, shot in the head. It really hurts when I think of her.

How did you come to leave Syria?

Ahmad: On my birthday last May, I decided to leave the camp and play somewhere nearby, so I hauled my piano onto a wagon and pulled it along till I reached a checkpoint where a member of IS stopped me and said, "Don't you know that this instrument is forbidden?" Then he just burned it. At that moment, not only my piano was on fire. My heart too.

Then I made the big decision to leave Syria and flee to Germany. Here I want to be the voice of Al-Yarmouk Camp, to do something for Syria and ensure a safe future for my sons: Ahmad who is three and Kinan who is one year old.

My mother managed to put up the necessary sum of money – around 3000 euros – saying, "Please just take the money and leave the country. I don't want you to end up like your brother." My brother was arrested three years ago and we have no idea whether he's alive or not.

But you made the trip alone?

Ahmad: The plan was to travel with my wife and children, but thank God they didn't join me till later, as the journey was harsh. I even saw strong men collapsing during it. First, we went to Homs, in central Syria, intending to continue on to Turkey, Greece and finally Germany. But I was arrested in Homs for nine days, so my wife and kids had to go back to the camp in Damascus. After my release, I was completely broken, but decided to proceed alone on to Germany with the intention of later sending for my family.

What about the rest of the journey?

Ahmad: Crossing the sea and travelling through Turkey was very dangerous. Many times on the boat, we were at the edge of death.

But I arrived in Germany safely and I would like to thank the German people and government, who have treated us like human beings. After staying in many different facilities, I am now at a refugee shelter near Giessen, waiting for the final transfer. Germany has done and still is doing great things for refugees. But I must also say that the procedures are very slow. People in Syria are under threat every single minute. I don't ask for money. I only need my documents to be processed quickly so that I can send for my wife and children. They are facing difficult times and I feel guilty for leaving them there.

Now you have been awarded the Beethoven Prize. What does this mean to you?

Ahmad: At the concert, I'll be singing and playing songs I composed while I was in Yarmouk. One of them I sang with that little girl who later died. There's also a song whose lyrics were written by my best friend, who came from Gaza and was killed as well. I'm dedicating it to my dear friend, Zakaria Al-Khatib, whose wife died while she was giving birth to their first boy. All of these songs bring up deep, mixed emotions inside me, bitter memories and sweet memories of Syria.

What are your wishes for the future?

Ahmad: I would like to thank Germany again for everything they are doing and for receiving us refugees, when Saudi Arabia has refused to do so and even the Palestinian president Mahmoud Abbas has turned us down as well. My dream is to go to my country, Palestine. And for help in reuniting me with my family as soon as possible.

Since Ali Khamenei, Iran's most powerful man, has openly and unconditionally come out in support of Putin's war in Ukraine, logistical help is on its way, with an allegedly ... END_OF_DOCUMENT_TOKEN_TO_BE_REPLACED

Tourists have been returning to Tunisia, Egypt and Morocco. But, given the global uncertainty caused by the Ukraine war, will the comeback be enough to save a struggling sector, ... END_OF_DOCUMENT_TOKEN_TO_BE_REPLACED

The highly controversial Indian blockbuster "The Kashmir Files“, on the exodus of Kashmiri Hindus in the 1990s, is characterised by unilateral representations, negative ... END_OF_DOCUMENT_TOKEN_TO_BE_REPLACED

"Flugt" is the world's first museum dedicated to the stories of those forced to flee. The new museum, which focuses on the fates of refugees then and now, is housed in a former ... END_OF_DOCUMENT_TOKEN_TO_BE_REPLACED
Author:
Rim Dawa
Date:
Mail:
Send via mail

END_OF_DOCUMENT_TOKEN_TO_BE_REPLACED
Social media
and networks
Subscribe to our
newsletter