Skip to main content
Interview with the Poet SAID

"I Have Defended My Piety against the Islamic Republic"

Since 1965 the poet SAID has lived in exile in Germany, and has found a new home in the German language. In his new book of essays, SAID involves Orient and Occident in a discussion over their common cultural roots. Eren Güvercin spoke to him 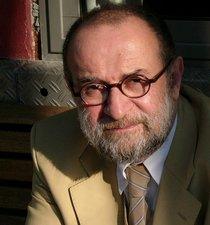 "One of Europe's main problems is this lack of humility." SAID, poet in exile

​​You grew up in Iran and later had to flee the country. Your biography is a combination of Orient and Occident. What do you think of the "clear" division between Orient and Occident that predominates today, based on the cultural theory of the clash of civilizations?

SAID: I think this division is lethal. But I'm also convinced that it can't be attributed to the "clash of civilizations". This, after all, is a slogan that only became fashionable a few years ago. I think instead that it has its origins in European arrogance and Oriental ignorance. The Europeans believe that everything belongs to them and that everything has to be determined from the European standpoint. In the Orient, on the other hand, people often think that Europeans are stupid and only think about money whereas "we" preside over mysticism and fine values. Both, of course, are wrong. Goethe has already demonstrated that it can be otherwise.

In your book of essays Das Niemandsland ist unseres (The No-Man's-Land Is Ours), you write that thanks to your childhood you have an open attitude towards religion. Are you a religious person, or do you feel detached from religion as a result of your experiences in Iran?

SAID: In 1979 in Iran, a religion directly seized power. I always say of myself that I defended and safeguarded my piety against the Islamic Republic, which was not an easy thing to do. I don't get involved – I, as a declared opponent of this republic – in campaigning against Islam or against Christianity. That's not my kind of thing. What has happened now, coupled with the terrorism that is financed and supported by Iran, is a political issue. We have to fight the political version. While Hizbollah is causing such havoc in Lebanon, Jordan is right next door, where a liberal government that maintains good relations with Israel is in power. So it can't be a problem with Islam, but with the structure of the society. Yet some Europeans make this mistake, and condemn Islam – a fatal error!

So the problem is that no differentiation is made between Islamism as a modern political ideology, and Islam the religion? 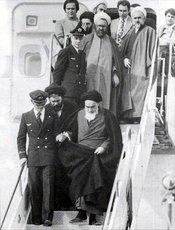 Khomeini upon arrival in Iran in 1979: "The Islamic Revolution has driven the majority of the Iranian people away from the Islamic faith," says SAID

​​SAID: I don't like the term "Islamism". Islamic terrorism, however, came into existence for nationalistic reasons, namely the 1967 war. In this war the Arab armies experienced total failure. For years Nasser had preached that "We will be victorious!", and then people saw how these politicians failed completely, that they were useless. It's often been the case throughout history that people turn back to religion when no other options are available to them. It's a perfectly normal development. We have to see the causes as lying with the nation states and the national governments, not with the religion itself, because every religion lives from interpretations. This is true of both Islam and Christianity.

You say you safeguarded your piety from the Islamic Republic. What effects has Iran's so-called "Islamic Revolution", which claims God as its inspiration, had on the faith of the Iranian people?

SAID: The Islamic Revolution has driven the majority of the Iranian people away from the Islamic faith. Nowhere in the Islamic world are the mosques as empty as they are in Iran. People are tired, and they stoop to adopting an anti-Islamic attitude. This is a great danger. Because, especially in Iran, after the Islamic Revolution the hour of Iranian nationalism has come, which is a disaster. Never before has Iranian history known this kind of aggressive, arrogant nationalism. It has come about as a way of defying Islam, but this defiance ought to be directed against the Islamic Republic. I believe that the Islamic Republic has greatly weakened Islam, not only in Iran.

You've devoted a chapter of your new book to the Persian poet Hafez. A special relationship existed between the poets Hafez and Goethe, as we can see in Goethe's "West-Eastern Divan". What, in your opinion, is Hafez' status?

SAID: He is the prophet. Let me give you an example. When the Islamic Revolution erupted, the intellectuals among the mullahs attacked Hafez as a drinker of wine. Then the war broke out, and Iraq attacked Iran. The weekly paper of the Revolutionary Guard had a motto. The motto was by Hafez. They couldn't escape this man. This government has done its utmost to defeat Hafez. It has not succeeded. Hafez is one of the great mystics. People need something to hold on to, and these days Hafez is something people hold on to. There are hundreds of editions of his "Divan". Nowadays even the leader of the Revolution boasts of being a great connoisseur of Hafez. This is the same Hafez they wanted to suppress.

Does the "West-Eastern Divan" take on particular significance nowadays, in times when ideologues on both sides see the other as a bogeyman? 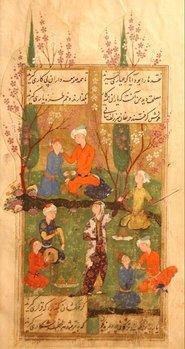 "The power of mysticism": Divan of Hafez, Persian miniature, 1585

​​SAID: I really don't think the Islamic world pays it any attention at the moment. The people in power have done tremendous cultural damage. The number of books and editions published is falling rapidly. I think the majority of people in Iran have very little time for it. They have a lot of time for European technical achievements; they're full of admiration for those.

How was Hafez, who never left his home village of Shiraz, able to entrance people throughout the world with his poetry?

SAID: That is the power of mysticism. It is well known that Hafez said he was called Hafez because he knew the Koran by heart. His starting point was therefore the Koran. In one poem he says that "when you know 13 versions of the Koran by heart, as I do, you will cry out in adoration". So he starts with the Koran, and finishes with adoration, love. That's fatal in Iran nowadays, because nobody interprets the Koran in this way. Those who do are in prison. Right now the prisons in Iran are full of religious people, not leftists or liberals. They are being arrested because they are taking action against this government based on their interpretation of the Koran. That's the beginning of the end of this regime. I realize it may take a very long time – I'm not naïve – but, for the first time, mullahs are joining the demonstrations against the government. That is a one-off.

You say of yourself that you're not a religious person, but that you value religion. Do people need religions in order to maintain their humility?

SAID: I don't know what people need. I'm not a prophet. I don't practise any religion and I never have done. With considerable difficulty I have salvaged my piety from the barbarians who rule in the name of a god. But I believe that people do need something along these lines. You can call it spirituality, piety, or – as Max Weber did – "religious musicality". A vibration; something that is in us, and which aspires to something else. One of Europe's main problems is this lack of humility. I was close to tears when the American president, of whom people say that he is the strongest of men, began to speak with the words, "With great humility … I stand before the problems…". Humility is not submissiveness; it is something else entirely.

SAID came to Munich in 1965 as a 17-year-old student. After the fall of the Shah in 1979 he returned briefly to Iran. However, the mullah's newly-established theocracy caused him to come back again to live in exile in Germany. He has received numerous awards for his writing, as well as for his commitment to supporting people subject to political persecution. Among other accolades, SAID was awarded the Adalbert von Chamisso Prize in 2002, and the Goethe Medal, the official decoration of the German Federal Republic, in 2006.

Interview with SAID
No Straight Whiskey for the Detective
German-Persian author Said has just published a new collection of poems. Here he talks to Claudia Mende about his "Psalms", the Teheran of his childhood and the problems facing the cultural scene in Iran today

Interview with SAID
"A Dialogue Means That I Show My Own Weaknesses"
"Islam and I" is the title of a volume of essays by Iranian-born lyricist and writer SAID recently published by C. H. Beck. In an interview with Claudia Kramatschek, the author speaks of his relationship with Iran and religion

END_OF_DOCUMENT_TOKEN_TO_BE_REPLACED
Social media
and networks
Subscribe to our
newsletter