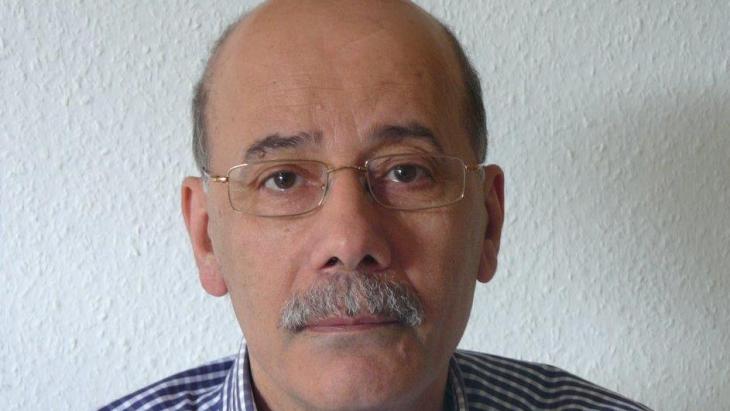 Lebanon: "A mixture of vacuum and volcano"

A million Syrian refugees, a catastrophic economy and increasing domestic hostility towards Hezbollah: the war in Syria is pushing neighbouring Lebanon to the limit. Mona Sarkis spoke to the Lebanese journalist Abdel Mottaleb el-Husseini about the current political situation in his country

Mr El-Husseini, Hezbollah is openly fighting on the side of the Syrian regime. What are the consequences of this for the "party of God", which has for years emphasised its genuine Lebanese national character?

Abdel Mottaleb el-Husseini: Even past Arab supporters now see it only as an instrument of Iran, and it has lost a great deal of respect. Also, its nimbus of being a liberation movement has practically disappeared since it has been openly supporting a brutal dictator. This stance also contradicts the party's own understanding of itself. Hezbollah always viewed itself as the "party of the disenfranchised", and when it stepped in to help Damascus there was initially great disaffection among its members. But the pressure from outside was greater. From the first day of the Syrian revolts, the Saudi propaganda machine implied a Sunni-Shia clash. On the other side is Iran, which wants to retain its only Arab ally. Syria is also the transit country for the weapons that Hezbollah receives from Tehran. So if Assad were to fall, so too would Hezbollah. Given this constellation, the party couldn't stay out of the conflict.

Meanwhile Hezbollah's Secretary General Hassan Nasrallah heightened the confessional nature of the conflict by starting to emphasise the "battle against the Sunni apostates" [takfiris]...

El-Husseini: Once the extent of their involvement in Syria became clearer, Hezbollah could hardly continue peddling the old pan-Arab slogans. So they took the bull by the horns and did the same as the Saudis, explaining their military intervention as a move to defend the holy sites of Shia Islam in Syria. Of course, this meant they further deepened the rift between Sunni and Shia Muslims and put themselves in a dangerous position that will be a problem for them for a long time to come. 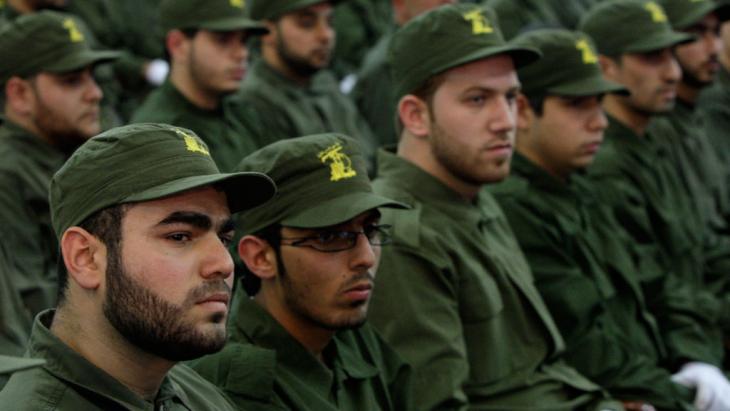 No second front: Hezbollah is not interested in opening a second front with Israel as long as it is fighting in Syria. El-Husseini explains that Israel doesn't want Assad to fall, as he is at least a calculable enemy, but it doesn't want to see Hezbollah gain strength, either

Videos have appeared on YouTube of the battle for Yabrud, a battle Hezbollah won for the Syrian regime earlier this year. The films show Hezbollah fighters already celebrating the return of the "Saheb al-Zaman" – a euphemism for the Mahdi, whom the Shia believe is a descendant of the Prophet who will reappear at the end of days to rid the world of all evil. How should this be interpreted? Is it a sign of a growing religious fanaticism within the party, which until now could be categorised as an extremely pragmatic political player?

El-Husseini: I believe it is out of the question that Hezbollah could mutate into the Shia counterpart to al Qaida. Unlike the latter, it is not loosely structured but highly organised, and because of its political experience – after all, it has ministers and deputies in the Lebanese parliament – and its military successes, it views itself quite differently. Also, it does not depend on the financial goodwill of a handful of fanatical figures, but is an integral element of a regional power – that of Iran. These are completely different characteristics to those exhibited by the terror cells of Al Qaeda.

What has become of Hezbollah's liberation battle against Israel?

El-Husseini: It's obvious that Hezbollah doesn't want a second front as long as it is fighting in Syria. The Israelis are happy about that, because they don't want to see the fall of Assad, who has been a calculable opponent for them for years. Nevertheless, Tel Aviv fears a further strengthening of Hezbollah and is therefore remaining vigilant. Meanwhile, how Hezbollah plans to regain its credibility as the greatest Arab resistance force against Israel - that's another matter.

Lebanese politics are also hanging in the balance. Due to its wrangling with Hezbollah, the government is unable to act, parliamentary elections were postponed last year, and the extreme polarisation of pro-Iranian and pro-Saudi camps makes the election of a new president impossible. Where do you see things going from here? 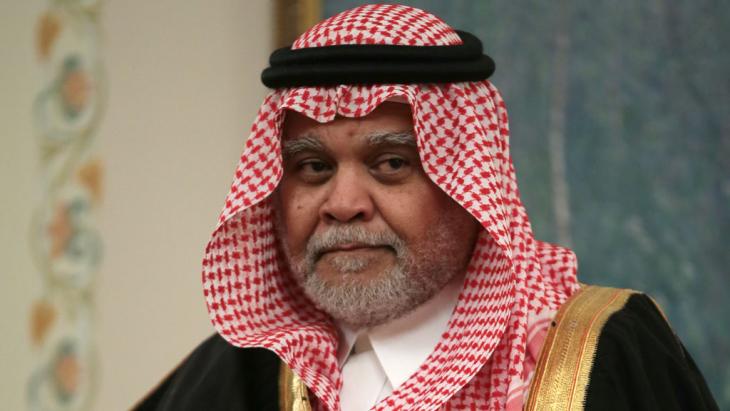 The former head of the Saudi secret service, Prince Bandar bin Sultan, stepped down unexpectedly in April. He was at odds with the US over its refusal to intervene militarily in Syria and its prevention of arms shipments to the rebels. For its part, the US criticised Saudi Arabia for supporting radical Islamist groups in Syria

El-Husseini: The present hope is for a Saudi-Iranian rapprochement that could end the war in Syria – a hope recently triggered by the Saudi Foreign Minister when he invited his Iranian counterpart to visit Riyadh. The request came as a result of internal power struggles going on within the Saudi royal family, and pressure from the US. Both factors had already led to the spectacular dismissal last April of the head of the Saudi intelligence agency, Prince Bandar bin Sultan. Prince Bandar was a hardliner in relation to Syria and always supported a militant strategy against Damascus – or at least arming the rebels. But the rebel movement in Syria got out of hand; things went too far for everyone, and the US urged containment. Bandar bin Sultan's dismissal is an initial sign that the Saudi-Iranian confrontation in Syria should not escalate. But the question is whether these efforts will be successful and if so, when. As long as all this is unclear, we can't expect much in the way of constructive movement in Lebanese political life.

There are now almost a million Syrian refugees in Lebanon. What effect is the influx having on the country?

El-Husseini: The majority of them are Sunni. This upsets Lebanon's fragile confessional structure. Also, it can be assumed that many of these Sunnis harbour strong resentment against Damascus and Hezbollah. Moreover, all the refugees of course pose an immense challenge to what is an already weak economy.

A report from the World Bank says Lebanon has lost 1.8 billion euros as a result of the Syrian crisis. 170,000 Lebanese could slip below the poverty line. What are the implications of this?

El-Husseini: The problems are overwhelming. You only have to consider Lebanon's notorious water shortage. Add to that the fact that it has rained very little in recent months – and now water needs to be made available to a further one million people. These are huge challenges, and without wanting to resort to prophecies of doom, you may recall that the trigger for the 1975 civil war was the displaced Palestinians who were unable to find a second homeland in Lebanon. The PLO contributed to the destabilisation of the country, to the point that certain Lebanese parties wanted to put an end to their presence by armed force. I see no signs of a comparable tipping point yet. But the future is entirely uncertain, because it is also inconceivable that Assad will ever control Syria again as he did three years ago.

Abdel Mottaleb El Husseini was born in Lebanon in 1949 and lives in Germany. His work as a freelance journalist and author focuses on political, social and cultural issues in Arabic-speaking nations.

Home
Print
Newsletter
More on this topic
Hezbollah in Lebanon: How Hezbollah is paralysing Lebanese politicsHezbollah after the Beirut attacks: A battle on many frontsHezbollah and the uprising in Syria: Can the ''Party of God'' weather the Arab Spring?
Related Topics
Al-Qaida, Arabellion, Assad regime, Hezbollah, Refugees, Sunni-Shia tension, Syrian Civil War, Syrian opposition
All Topics

Insults directed against Egyptian President Abdul Fattah al-Sisi have been particularly prominent among the hundreds of chants by Arab protestors in Algeria, Sudan, Iraq and ... END_OF_DOCUMENT_TOKEN_TO_BE_REPLACED

Michael Frey has written a fascinating book about the contemporary political thinker Nassif Nassar. Since 1967, Nassar has devoted his life’s work to the question of a fair social ... END_OF_DOCUMENT_TOKEN_TO_BE_REPLACED

Today's in-fighting over the composition of the country's next cabinet is part of a larger battle for a new political settlement. The financial crisis poses a mortal danger to the ... END_OF_DOCUMENT_TOKEN_TO_BE_REPLACED

The upheavals of the past year in the MENA region are arguably as momentous as those of the Arab Spring in 2011. Yet perhaps the biggest difference is that our interest seems to ... END_OF_DOCUMENT_TOKEN_TO_BE_REPLACED

Beirut usually sparkles and dazzles at Christmas time. This year, marked by major protests, however, everything has been turned on its head: there is a distinct lack of Christmas ... END_OF_DOCUMENT_TOKEN_TO_BE_REPLACED

In the heart of Beirut's manicured downtown, something is stirring in a bullet-pocked concrete shell of a building known as "the Egg": the visually unappealing Egg has advanced to ... END_OF_DOCUMENT_TOKEN_TO_BE_REPLACED
Author:
Mona Sarkis
Date:
Mail:
Send via mail

END_OF_DOCUMENT_TOKEN_TO_BE_REPLACED
Social media
and networks
Subscribe to our
newsletter