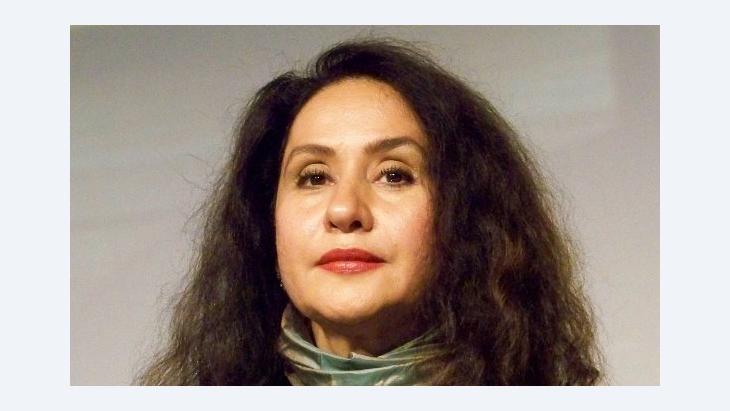 ﻿The Saudi-Arabian writer ﻿Raja Alem is regarded as one of the leading voices in Arabic literature. Her new novel, "The Necklace of the Dove", which shows the dark side of modern Mecca, was awarded the Arab Booker Prize. An interview by Irmgard Berner

Ms Alem, you were the first woman to win the Arab Booker Prize, the international prize for Arabic fiction; what were the reactions to that achievement in Saudi Arabia?

Raja Alem: People were happy that I won it. It's not just the Booker Prize – my whole career is recognized in Saudi Arabia. When I got on to the shortlist, people assumed that I would win it. The Prize has created a cultural arena in the Arab world, and the novels which are on the list achieve greater attention. People read these books. And the Prize ensures that the book will be translated, at least into English.

Your book deal with topics like drugs, prostitution and the arms trade. Do people in your home country see you as a critical voice? 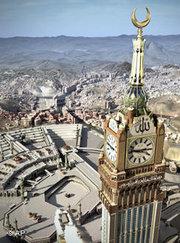 A new identity for the city: The Abraj Al-Bait Towers and the Masjid al Haram in Mecca

​​Alem: Not necessarily. I throw light on to aspects of our values and our way of life which are unique, as I see it. And, in spite of that, our way of life is deeply humane.

What is unique about it?

Alem: Mecca is a religious site – it's a city of God, where the merely human has no place. But it is still a city of human beings, with human misery and the daily struggle to get on top of life. That's what my books try to say.

Aisha, the main figure in the book, writes love letters to a German. Why?

Alem: Because that's her fate. She was the victim of a motor accident, her whole family was killed, and she ends up with a broken hip. Good friends help her; they collect money so that she can go to Germany, because the medical treatment there is very good. So she goes there, is treated by this man, and falls in love with him.

"The Necklace of the Dove" consists of the many e-mails which Aisha sends to the German man she loves. Her language is very open…

Alem: Such an open language doesn't frighten me – you have that every day in millions of e-mails. The story is happening today; these are modern people. They've grown up in a society which is influenced by the thinking of the fifties and the sixties, but they are confronted with the developments of the 21st century and with the methods of communication and the media which are available today.

You are also not afraid to describe drastic scenes involving crime and corruption. 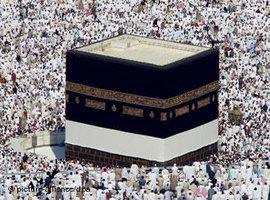 Literary fixation: "Everyone circles, and I circle around the old Mecca," says Raja Alem

​​ corruption, but the exploitation of workers by the investments of big companies – Mecca is not spared that, just like everywhere in the world. The whole world belongs to these big corporations, which just want to make ever more money.

Isn't that a contradiction to the holy pilgrim city?

Alem: Money is only one side of the coin; the other is the magic, the energy which is reinforced by the masses of pilgrims. It all runs along in parallel. It's unbelievable! You feel this enormous commercial power, and, at its centre, there's this spiritual power. And you can't tell which of these powers will win out at the end.

But obviously, you seem to carry much of the old Mecca with you.

Alem: Yes, as if it had taken possession of me. Who would I be without that? Where do I come from? I think the first city in which one lives leaves a long-lasting trace on one's character. Wherever you go, you are still circling around this same place. In my books, in my life, I am always doing the same as the people do when they circle the Kaaba. Everyone circles, and I circle around the old Mecca. If I can't stop it changing, at least I can hold on to it in my books.

Like Aisha, who searches for the time she has lost, while reading Marcel Proust's "In Remembrance of Things Past"?

Alem: Essentially, we don't know what this lost time is, when this lost time was. Was it in our past? Or will it be in our future? Is it in the time we lost before we were born on this earth? We try to find it. I think this sense of loss drives us on to try to catch up with it – in love, in our lives, in our work.

The power of economy, the power of spirituality: Cover of the Arabic edition of Raja Alem's "The Dove's Necklace"

​​ What is the situation with regard to the rights of woman today?

Alem: According to the law they have the same rights as men. I hear that women everywhere get less money than men get for the same work; I don't know if that's true, but in Saudi Arabia, if a woman does the same job as a man, she gets the same pay. The only difference in Islam is that women have the right to have their own work and run their own businesses, without the men having any say in the matter. Women keep their own pay; they don't have to spend it on the family. If a woman marries a Saudi man, and they both work, he has to pay for the house and the expenses. The woman doesn't have to pay for them. It's better for her. Women see that as an advantage.

Does that mean that our view of your world is wrong and distorted?

Alem: Yes. If you ask Saudi women, they say: I don't want any change; I'm happy as it is. But the outside world describes it as dark, cruel, sick. They say: Oh, the women aren't allowed to drive! But perhaps the women are content to have drivers.

The lane whose creation myth you describe in the book doesn't exist any more. It was demolished in the eighties. In your early years, you got to know the old Mecca, and the song of this lane seem like an obituary for the memory of songs which have ceased to be sung.

Alem: Everything I know about Mecca was told to me by my father and my mother. It's all oral tradition. That's my source. Everything which used to be there is now gone. The street isn't there any more. Nor is the house of my grandfather. The house was still there when I started to write the book, but there was already a red sign on it, which meant it was going to be demolished. It was a beautiful house on a hill, and I was very shocked when I saw that red sign. By the time I'd finished writing the book, not only had the house gone, the whole hill had gone too.

So Mecca is changing greatly?

Alem: Just like other places in the world change. The only question is whether one should stand up against these changes. They are leading the city to another identity: to that of a city of skyscrapers made of glass and steel. The old Mecca only lives on in my book, and that's why this book is so close to my heart.

Do these changes make you sad?

Alem: Of course! "The Necklace of the Dove" is an elegy: I wrote it out of sadness, because I'm angry about these changes. At the end of the book everything was destroyed, and I was even angrier. But then I felt a great calm: who are we to stop this process of change? Let it go on, perhaps it will lead somewhere. And I said: this is the last book I shall write; it's over. But when I'd finished it, after three months, I started to write a new one. And it's about old Mecca. Again. It's like an illness.

Home
Print
Newsletter
More on this topic
Interview with the Saudi Writer Badriya Al-Bishr''Anything You Write about Is Made a Scandal''Interview with the Saudi Arabian Writer Abdo Khal: The Discovery of Arabic Literature in the Gulf
Related Topics
Arabic literature, Dialogue of Cultures | Intercultural Dialogue, Muslim women, Translation, Women in the Islamic world
All Topics

Syria, Egypt, Saudi Arabia and the UAE are among those countries increasingly misusing cybercrime legislation to silence dissent and curb freedom of speech. Could a new global ... END_OF_DOCUMENT_TOKEN_TO_BE_REPLACED

With regard to gender justice, things look bleak in the Arab world. Laws typically discriminate against women, while national legislation all too often does not comply with the ... END_OF_DOCUMENT_TOKEN_TO_BE_REPLACED

Anger in the Middle East is spreading over comments made by an official of India's ruling BJP about the Prophet Muhammad, with various countries summoning New Delhi's envoy and a ... END_OF_DOCUMENT_TOKEN_TO_BE_REPLACED

The Ukraine war is changing the global geopolitical landscape. Ali Khamenei, Iran's most powerful man, is already cosying up to Russia in anticipation of a harsh post-war reality ... END_OF_DOCUMENT_TOKEN_TO_BE_REPLACED

The Ukraine war has seen energy prices spike with oil producers in the Middle East making more money than ever. But will it put the brakes on long-planned reforms to diversify oil ... END_OF_DOCUMENT_TOKEN_TO_BE_REPLACED

END_OF_DOCUMENT_TOKEN_TO_BE_REPLACED
Social media
and networks
Subscribe to our
newsletter