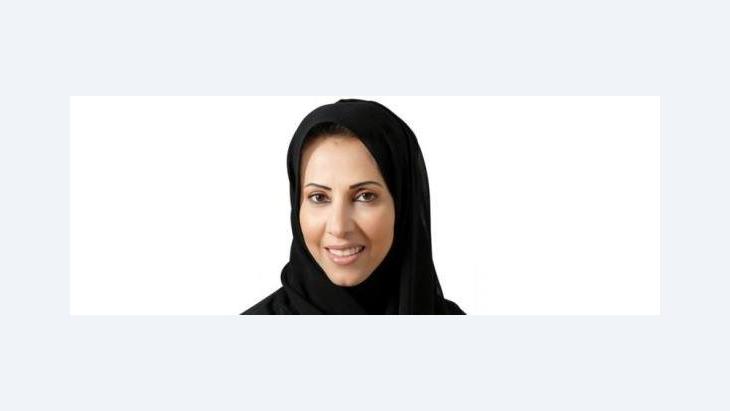 Interview with the Saudi Writer Badriya Al-Bishr
''Anything You Write about Is Made a Scandal, Even Love''

﻿In her novel "Hind and the Soldiers", Saudi author Badriya Al-Bishr focuses the daily struggle of women in her native country for a little more personal freedom. Christoph Dreyer interviewed the Dubai-based writer and columnist

Were you surprised that your book was approved for sale in Saudi Arabia at all?

Badriya Al-Bishr: Yes, that was surprising indeed. But there have been some internal changes since King Abdullah took power, and there was to be a fresh start for a reform movement. So it was decided not to take measures against some prospective books, and mine was one of those that got this chance. On the one hand, of course, that's good for the book, giving it a larger audience. But on the other hand it also harms the book by exposing it to counter-attacks.

How was the book received by the Saudi public?

Al-Bishr: There were three allegations raised against the book. The first was that it departed from the teachings of Islam because it mentions that my protagonist is reading a novel titled "Christ Re-crucified" (whereas the Koran maintains that Jesus wasn't crucified in the first place, the editor). The second allegation is that I accuse anyone objecting to my "lecherous desires" of being joyless soldiers. And thirdly, it was claimed that I offended my mother in the novel, because they consider it an autobiography and think the mother mentioned in the book is identical with my real-life mother. 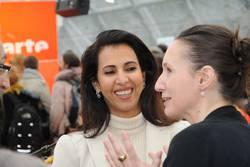 "What is considered a scandal is not the thing that's happening but the fact of acknowledging it." Badriya Al-Bishr is among the first Saudi authors to speak openly about sexual assaults

​​Don't you think it is strange that these particular points are being attacked? Why not the fact that you speak openly about sexual assaults or mock the religious police?

Al-Bishr: Many consider this book an angry outcry. But there is also a problem in conservative societies that always want to keep things under the lid. In these kinds of societies, any subject you deal with will be a scandal, even love.

Do you think most people in Saudi Arabia share your view of things?

Al-Bishr: Some or maybe half of my generation will agree, but the next generation will consider what I write trivial compared to what's happening in their lives. I don't think today's youth, who are influenced by satellite TV, mobile phones and the internet, will find anything but grandma's stories in my novel. Relations between young men and women have become something quite natural now. On the contrary, they've even started seeing those who don't have such relations as backward.

Could your novel be said to describe the struggles of a particular generation of women, then? 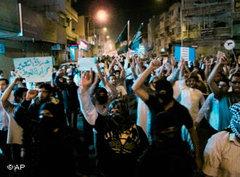 "Fierce push for change from the inside": anti-government protests in Qatif, Saudi Arabia

There is a nice saying I heard from one of the analysts of the Egyptian revolution. He said the youth can revolt because in the age of the internet they know freedom, whereas the generation before them didn't know what freedom means.

How serious are the angry reactions to your book that you mentioned?

Al-Bishr: Maybe if another woman was in my place she would feel cornered or in danger, but I consider this risk part of the profession of writing and bringing about change. So I accept that many people reject what I am writing, because quite simply I look at the side that agrees with me. As far as I'm concerned, it's enough if half or less of the people accept what I write and agree with it. I think that's good, that's quite an achievement.

How important would you say is the role of women in the changes taking place in Saudi society, or also in other Arab societies?

Al-Bishr: I think women participate in this actively and truly. The problem is that they are not allowed to be in the front line, so they change things from the second row. But women have more courage, more anger and the same awareness, so they are taking part. Whenever women are given a chance today they are faster to progress.

Is this also because there is more pressure on women, because they suffer more from the circumstances? 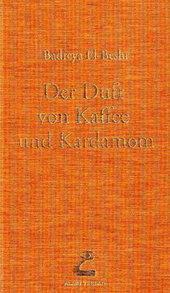 "Lecherous desires": cover of the German edition of "Hind and the Soldiers". The book has not yet been published in English

​​Al-Bishr: Of course. There is a suffering shared by men and women, there is an overall lack of rights. But the pressure endured by women generates this kind of explosion. So the initiative will come more from the women's side.

Where do you see Saudi Arabia five or ten years from now? In which direction will society develop?

Al-Bishr: There is an element of surprise in what's happening in the Arab states. So I don't know to what extent we will progress, but the only way open is forward. You can't go back or remain where you are, you have to go forward.

What's your opinion of recent political events in Saudi Arabia, such as the demonstrations and petitions to the king?

Al-Bishr: I don't think there will be a revolution, it doesn't look like that. There is a fierce push for change from the inside, however, a strong pressure. But no-one knows to what extent it will influence the country's politics.

But there will be some kind of change?

Al-Bishr: Sure, absolutely, there has to be.

The Saudi writer Badriya Al-Bishr studied literature and social sciences at King Saud University, Riyadh and the Lebanese University in Beirut. She is now a journalist, writing literary and socially critical columns for several Saudi newspapers, at present mainly Al-Hayat.

Syria, Egypt, Saudi Arabia and the UAE are among those countries increasingly misusing cybercrime legislation to silence dissent and curb freedom of speech. Could a new global ... END_OF_DOCUMENT_TOKEN_TO_BE_REPLACED

Mourad al-Marouai was just nine when a landmine killed him on a beach in war-torn Yemen, a tragedy that will haunt his family forever. After a swim, the little boy "suddenly ... END_OF_DOCUMENT_TOKEN_TO_BE_REPLACED

Anger in the Middle East is spreading over comments made by an official of India's ruling BJP about the Prophet Muhammad, with various countries summoning New Delhi's envoy and a ... END_OF_DOCUMENT_TOKEN_TO_BE_REPLACED 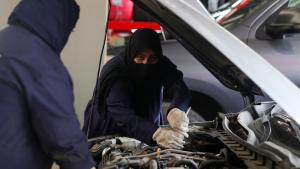 Saudi women move from behind wheel to under the hood

An auto repair garage in Saudi Arabia is turning to an untapped source for new car mechanics: Saudi women, who just four years ago weren't even allowed to drive END_OF_DOCUMENT_TOKEN_TO_BE_REPLACED

Analyst Iyad El-Baghdadi examines the ongoing tensions between the United States and the two Gulf states – Saudi Arabia and the UAE – and their geopolitical implications in ... END_OF_DOCUMENT_TOKEN_TO_BE_REPLACED

The Ukraine war has seen energy prices spike with oil producers in the Middle East making more money than ever. But will it put the brakes on long-planned reforms to diversify oil ... END_OF_DOCUMENT_TOKEN_TO_BE_REPLACED
Author:
Christoph Dreyer
Date:
Mail:
Send via mail

END_OF_DOCUMENT_TOKEN_TO_BE_REPLACED
Social media
and networks
Subscribe to our
newsletter