Many young Senegalese want to go to Europe to escape unemployment and poverty. They risk their lives to fulfil this goal. Of those that make it, most are deported back to Senegal. Naima El Moussaoui spoke to the Senegalese sociologist Amsata Sene about the causes and the consequences of irregular migration to Europe 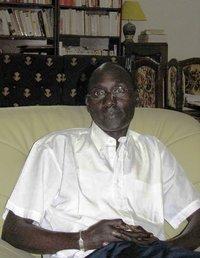 Amsata Sene: "The phenomenon of clandestine migration is a result of the political failures of African governments."

​​ Mr Sene, here in Dakar I've only met one young Senegalese man who said he wanted to stay in Senegal. Those who get the chance leave the country. How can the situation of young people in Senegal be best described?

Amsata Sene: Just imagine you spend the whole day sleeping or drinking tea. Imagine you're totally desperate and without any kind of future prospects. Imagine you don't even have enough money to cover life's basic needs … these young people have nothing more to expect from life. They are in a situation that can be described as "social marginalisation". They can neither satisfy their needs, nor the needs of their parents.

The one who says he's staying in Senegal is the one who's managing to secure the necessities of life here in this country. But we're still a long way off from being able to say that this applies to the majority of the population in Senegal or in Africa as a whole. Unfortunately to date we've not seen any serious or sound political solution that has succeeded in pulling the Senegalese out of this misery. That's why to a certain extent one can say that the phenomenon of clandestine migration is a result of the political failures of African governments.

Many of these young Senegalese, who arrive in the Canary Islands in their flimsy "pirogues" and are sent back home – or repatriated as it's officially known – blame the Senegalese government for their return, not the Spanish authorities. Why is that? 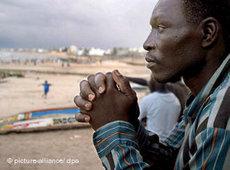 The illusion of fast cash and economic success in Europe: Thousands of Africans undertake the risky sea crossing to Europe every year and can expect to be deported immediately back to their homeland

​​ Sene: Strangely enough they all think that. There's an explanation for it: All these young people say this because the Spaniards tell them: "We'd like you to stay here with us, but your government does not approve, and there's nothing we can do about that."

How do you explain the fact that the Senegalese people believe this?

Sene: If we try to analyse the circumstances of their return, we could say the following: They are for example woken up in the middle of the night and told to pack their things. They are often given a form. But many of these Senegalese can't read, they only recognise certain words. Young people told me that at the top of these pieces of paper were the names of Spanish cities such as Barcelona.

They are told: "You're going now," and not informed as to their exact destination. In this kind of situation, Senegalese people tell themselves: "We're going to Europe." For this reason they get onto the bus without resistance, after they've willingly packed their things. Then they arrive at the airport and suddenly they are surrounded by police officers. They are apprehended, led away in handcuffs and sent back to Senegal on the next plane.

After an experience such as this, the young people say that they didn't want to escape from the refugee camp, because they were completely safe. They say that they were free, not in police detention and above all with exit permits for Spain. They say: "We were sure that we were allowed to stay – if only because people treated us so well here." All this just goes to demonstrate the great naivety of these young migrants. 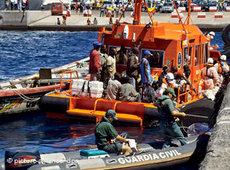 ​​ What kind of image of Europe do these young people have?

Sene: The image that younger generations have of Europe is somewhat mixed. Although they regard life in Europe with a certain mistrust, they don't doubt that it pays off. They are certain that they will achieve things and earn the kind of money that would be unthinkable if they stayed in Senegal. The indicator for the intensity of their motivation is the brother, the friend or the neighbour who returns to Senegal from Europe.

In this sense you can spend all day telling this young person that life in Europe can also be hard…but if he has a friend or a neighbour from the area who's the same age, who's come from Europe and during his holidays in Senegal he builds a house, drives a car, marries a woman and gives his family money, then there's no point in staying anymore. You can no longer dissuade this young person from leaving the country. Because proof of the success it can bring is right under his nose.

That means that illegal migration is primarily driven by the desire to find work in Europe, get established somewhere and send money to the family.

Sene: Many of these migrants don't have any professional training. Their aims are obvious. If you ask them: "What would you like to do in Europe?", they reply that they want to go there to work. Once they arrive there, they take any work they can get. What interests them about Europe is the money. It's not the culture, or the landscape, or anything else. None of them talk about the people in Europe. It's as though there are no people there at all.

Interview with Abdou Salam Fall
No Immigration Policy without Meaningful Development Policy
Many African nations view Europe's immigration policies as one-sided and selective. Abdou Salam Fall, a sociologist at Senegal's "Institut Fondamental d'Afrique Noire" (IFAN), advocates a policy of sustainable development as a solution for all sides. Naima El Moussaoui spoke with him in Dakar

END_OF_DOCUMENT_TOKEN_TO_BE_REPLACED
Social media
and networks
Subscribe to our
newsletter